There is no doubt that most families will make no purchase more monumental or impactful than a home. It stands to reason that such a purchase would garner a greater investment of time and money. As the housing market has continued to climb back toward pre-recession levels, homebuyers have shown a tendency to be more cautious in their spending habits, tending toward more conservative fixer-uppers as opposed to fully finished constructions. Here at Fixr we have analyzed the data to determine the average per-home cost of renovation expenses by state. We’ve analyzed this data to better understand the relation between geographic location and home improvement expenses. 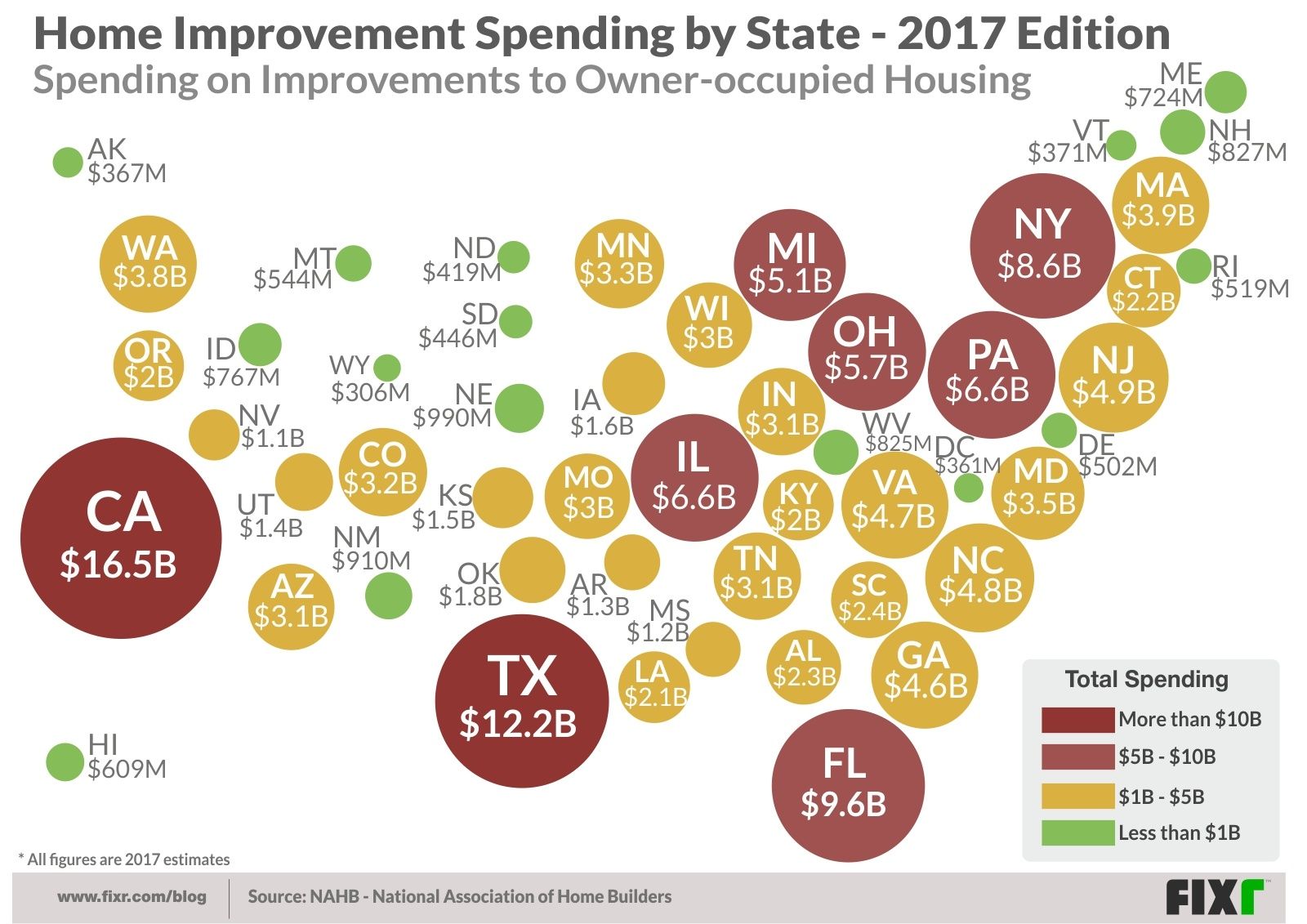 The map above displays the projected range of home improvement expenditures in for owner-occupied residencies in 2017.

A large portion of the data referenced within comes from projection models constructed by the National Association of Home Builders. Combining information from the American Housing Survey and the Census Bureau, and incorporating a specific spending model, the NAHB forecasts 2017 expenditures by county, allowing for a closer inspection of home improvement costs and their relation to the local social and economic demographics of the area.

Of the numerous trends, one of the most enduring exposed by the research is that there is an almost perfect correlation between home improvement costs and population density. Why this correlation occurs is somewhat open to debate, although certain factors seem prominently connected with the cost of renovation. Urban centers, especially on the coasts, have a higher cost of living, which relates to higher housing costs. This increase in costs situates prospective buyers seek out homes that are often in greater need of improvements, resulting in higher home improvement costs.

The higher cost of living in urban areas may not be the only factor at play. Census data shows that populations in urban centers have, on average, a higher level of education. Statistically, higher education correlates with higher incomes. By this logic, home improvement costs may be higher in urban centers simply because homeowners in these areas have greater expendable income.

Cost of Living and Costs of Improvement

While we find a relationship between urban centers and a higher cost of living, this is not an exclusive arrangement. The relationship between higher cost of living and increased expenditures as they relate to home improvement, however, seems to be more constant. A sterling example of this is Fisher Island in Florida. The zip code assigned to Fisher Island has less than 250 owner-occupied residents; however, the average cost of home improvement is over $21,000, placing it third for all U.S. zip codes in terms of average home improvements expenses.

Examining the Costs by State

There are also interesting geographical factors at play as we examine the state-by-state average. The top five states for highest average home improvements costs are Maryland, Massachusetts, Connecticut, New Jersey and, while not technically a state, Washington D.C. The dominance of the northeastern states is quite clear. In fact, out of the top 18 states (including the District of Columbia) ten crowd the northeastern shoreline. Many of the other top states outside of the northeast are usual suspects when it comes to an increased cost of living, including Washington, California, Hawaii and Colorado. Conversely, it seems much more difficult to draw a line of comparison between the lowest spending states. The five states the fall in the sub-$6000 range (Kentucky, Arkansas, Mississippi, West Virginia and New Mexico) seem to only loosely reflect any sort of relationship in terms of demographics or economics.

From the data made available through the NAHB, the correlation between cost of living and the expense of home improvements seems to exist, although it apparently only materializes toward the higher range of both components. What is clear from the data, is that nearly all levels of homebuyers are more interested than ever before in renovations and home improvement projects. Regardless of income level or geographic location, owner-occupied residencies have never been more primed for renovation expenditures.

Designing A Home Office in 2020 and Beyond: Expert Tips to Create the Best Workspace

Trends in Prefab and Modular Homes for 2020