Many homeowners don’t give much thought to the electricity that powers their homes on a day to day basis. You may think about it when the time comes to pay your bill, but as long as it’s working, it doesn’t always require much attention.

But what happens when it stops working? A power outage, or an interruption in the power that is supplying your home, is something you can’t ignore or not simply notice. Power outages can last from a few minutes to several days or even weeks depending on the cause and how bad the damage is. And while a minor power outage is an inconvenience at best - it’s not possible to use the microwave, watch TV, or use most appliances - a major power outage can be expensive and dangerous. Without power, the food in your fridge can go bad quickly. Many people who have wells will no longer have access to water, while those who rely on electricity to help heat and cool their homes or cook their food could find themselves in a very dangerous and uncomfortable situation.

Power outages can occur for several reasons. A storm could take on power lines or it could knock out a generator that supplies your area with power. In certain situations, brief power outages, sometimes known as rolling outages or brown outs, may occur if the drain on the grid is too high; the power company may reduce or cut power to certain areas to help prevent the grid from overloading. And whether the outage you experience is brief or ongoing, there is no denying that it can create a major interruption in your day.

This past year, there have been numerous catastrophic power outages across the country. In particular was the devastating weather in Texas, which left millions without heat, water, or electricity for several days. In addition, the rolling blackouts and wildfires in California have made an already difficult time with the pandemic and shutdowns even harder for residents.

And while these major events were large enough to get national coverage, there were countless more outages across the country that impacted thousands of people each month throughout the year. Collectively, these outages point toward a growing problem that needs to be addressed. 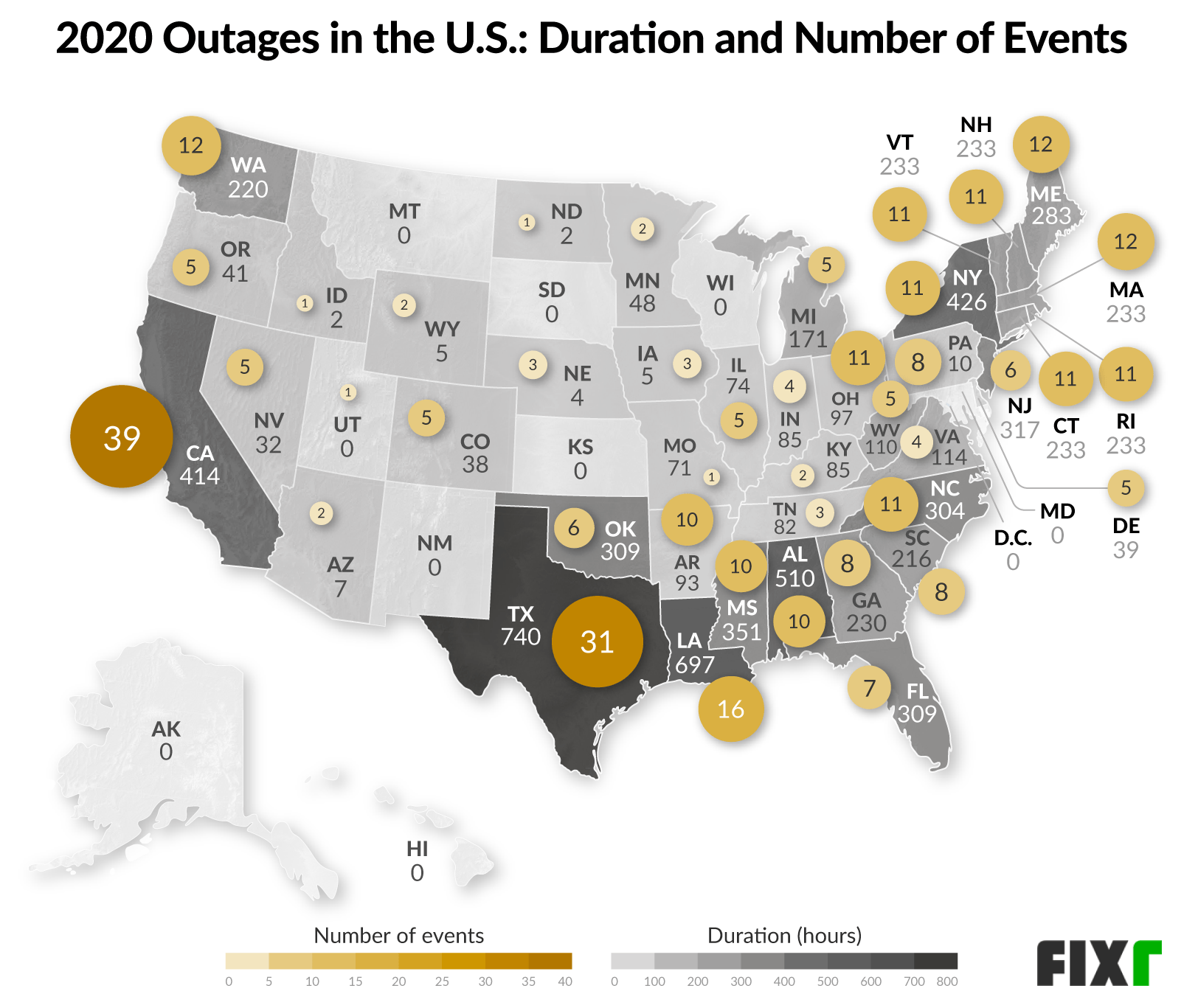 The above graphic shows the number and duration of power outages experienced across the United States in 2020. This data was compiled from the US Energy Information Administration’s annual findings. In the chart, you can see the severity of the outages and their impact in the color of each state - the darker the color, the more severe the outages. In addition, attached to each state is the total number of outages experienced during the last year, which range from 0 for states like Alaska, Montana, and Hawaii to much higher numbers in states like California and Texas. The total number for each state is circled; the other number shown is the number of total hours the affected areas were without power.

These numbers do not necessarily show the data for the entirety of each state, but may represent only the parts of the state that were impacted at any given time.

A quick look at the map above can show you several interesting things about power outages in the last year. The first is the enormous range on a state by state basis, with some states experiencing no to few outages, and some states being severely impacted. The second thing to note is that in some areas, the outages seem more concentrated. For example, the entire East Coast has experienced at least some degree of power outages, with many states having experienced moderate to severe outages. The West Coast and the South have also experienced more severe outages, while the Midwest and more central parts of the country were the least affected. This is mostly due to the more frequent storms that hit the coasts, combined with the wildfires that the West Coast experienced in the earlier parts of 2020.

Of the 50 states, 5 were more severely impacted by outages in 2020 than the others - Texas, Louisiana, Alabama, New York, and California. Each of those states experienced either more events or prolonged outages during each event than other states.

The state of Texas experienced a loss of power for 740.32 hours in 31 events of power failure. These were caused by a variety of issues which include severe weather and public appeal to reduce the use of electricity in order to maintain the grid due to severe weather. In addition, areas experienced unexpected transmission loss, and firm load shedding of 100 megawatts or more under system operations.

In Louisiana, residents experienced 696.55 hours of interrupted power due to 16 events of power failure. These were caused by severe weather, which caused a major loss of service to more than 50,000 customers as well as a complete shut-down of the transmission and distribution of electricity. In addition, there was unexpected transmission loss from three or more bulk electric systems.

Residents of Alabama experienced 510.07 hours of interrupted power due to 10 events of power failure. These were mostly due to severe weather. According to the EIA, the weather itself was directly responsible for a loss of service to more than 50,000 households at one time. It was also responsible for a transmission interruption, which caused a further 50,000 households to be without power for 1 hour or more as well.

In New York, 11 separate events caused residents to be without power for 426.2 hours in total. Severe weather was again one of the biggest causes of this problem. This includes weather directly causing the loss of service to 50,000 or more households for 1 or more hours. In addition, weather was responsible for the loss of 300 Megawatts or more for at least 15 minutes. Fuel supply emergencies also impacted the state’s electric supply, with a fuel supply deficiency proving to be unreliable.

California had a broad range of issues in 2020, which resulted in 39 events of power interruption and a loss of power for 414.4 hours in total. The main causes of these issues were severe weather, system operations failure, and fuel supply deficiency.

Severe weather in particular caused a loss of power to more than 50,000 households for at least one hour. Severe weather, combined with the wildfires also caused the state to call for a public appeal to reduce electricity use in the home to help maintain the grid, and caused firm load shedding of 100 Megawatts or more under an emergency operational policy.

System operations issues lead to a firm load shedding of another 100 Megawatts or more, as well as a total generation loss of 2,000 Megawatts in one area, and 1,400 Megawatts in another. Partial failures also caused black outs due to system operation problems, while fuel deficiencies caused unreliability of the system.

How to Prepare for Future Outages: Solutions for Homeowners

The severe weather and fuel deficiencies that caused these outages are only predicted to get worse with time. Climate change can mean periods of freezing temperatures, such as Texas experienced, as well as more severe weather such as the type that has hit Louisiana in recent months.

Homeowners do not need to sit back and wait for these outages to hit, however. There are things that you can do now to start reducing your dependency on the electrical grid. These systems can be used individually or with one another to help lower your daily electrical usage, and help protect your home from the severity of a prolonged outage as well.

Geothermal heating and cooling uses very little electricity to heat and cool your home efficiently. Rather than generating heat it takes heat from the ground, and transfers it to your home. During the hotter months of the year, it runs in reverse, taking the heat from your home and depositing it in the ground. It does require some electricity in order to run, but considerably less than conventional heating and cooling methods. It could, therefore, be more easily run on a small generator in the event of a power outage. It can also be easily powered by solar energy, and it can help reduce your dependency on the grid, which can help when brownouts or lower amounts of electricity are available. The cost to install a geothermal energy system is around $20,000 on average.

Over the last few years, there has been an enormous surge of interest and expansion into solar energy, particularly in states that have been hard hit with outages including Texas and California. Solar energy can also help lower your dependency on the electric grid. The number of panels you install, the size of your home, and how sunny your climate are will all impact exactly how much electricity you can save. It is possible to invest in a system that is large enough to run your home without any connection to the grid, but this will require you to have a backup system in place for times when the sun may not be strong enough or when your batteries are depleted.

Solar panels cost between $18,000 and $20,000 on average, while taking your home completely off grid would cost $50,000. Keep in mind that even if you go off grid with solar, you still need a backup system of a generator, wind power, hydropower, or some other source, as solar alone is not enough to continuously power a home. If you choose to add batteries to your solar plan - which can be used as a backup system in the event of a power outage, this can cost between $4,000 and $12,000 extra. Batteries are designed to work with your solar panel system. They store excess energy so you can use it later.

While batteries can help back up a solar system, a backup generator can back up your entire home without the need for an additional system. A backup generator can power your whole home when the power is out. It connects to your propane or natural gas line, and if you have a whole house generator, you won’t even notice an interruption in power, as the generator is designed to turn on as soon as it notices a fluctuation from the grid. If you live in an area that sees frequent outages, this is your best system for helping your household function normally until the power is restored. A whole house generator costs around $15,000 fully installed.

Protect Your Home and Family

Power outages can be minor inconveniences if they happen occasionally. They can also be dangerous and costly if they happen to last for days on end. The trends seen in the map above are only going to continue to worsen with time. Take steps now to help reduce your dependency on the grid or to make sure your home has a backup system that can help you weather the storm, and know that you’ll be secure no matter what the electric grid is doing.