During March of 2020, many businesses and industries were forced to shut down and halt production for a period of time, including lumber yards and saw mills. With an ever increasing demand for home building and renovation projects over the past year, matched with the fall-out from the pandemic, the price of lumber has reached new highs.

In Fixr.com’s previous look at this issue in September 2020, lumber had reached a price of $840 per 1,000 board feet. Since then, the cost has continued to sky-rocket to more than $1,300 for 1,000 board feet. And with recession-fueled low interest rates, consumers’ goals of building new homes is driving supply lower, resulting in these unprecedented price increases.

As the graphic below shows, lumber costs have dramatically risen 430% over the last 12 months to a record-breaking high. 88% of homes in the US have lumber framing and lumber is used throughout other areas of the home as well, which has led to an increase in the overall cost of home construction across the nation. So who is going to be responsible for paying this increase in costs? 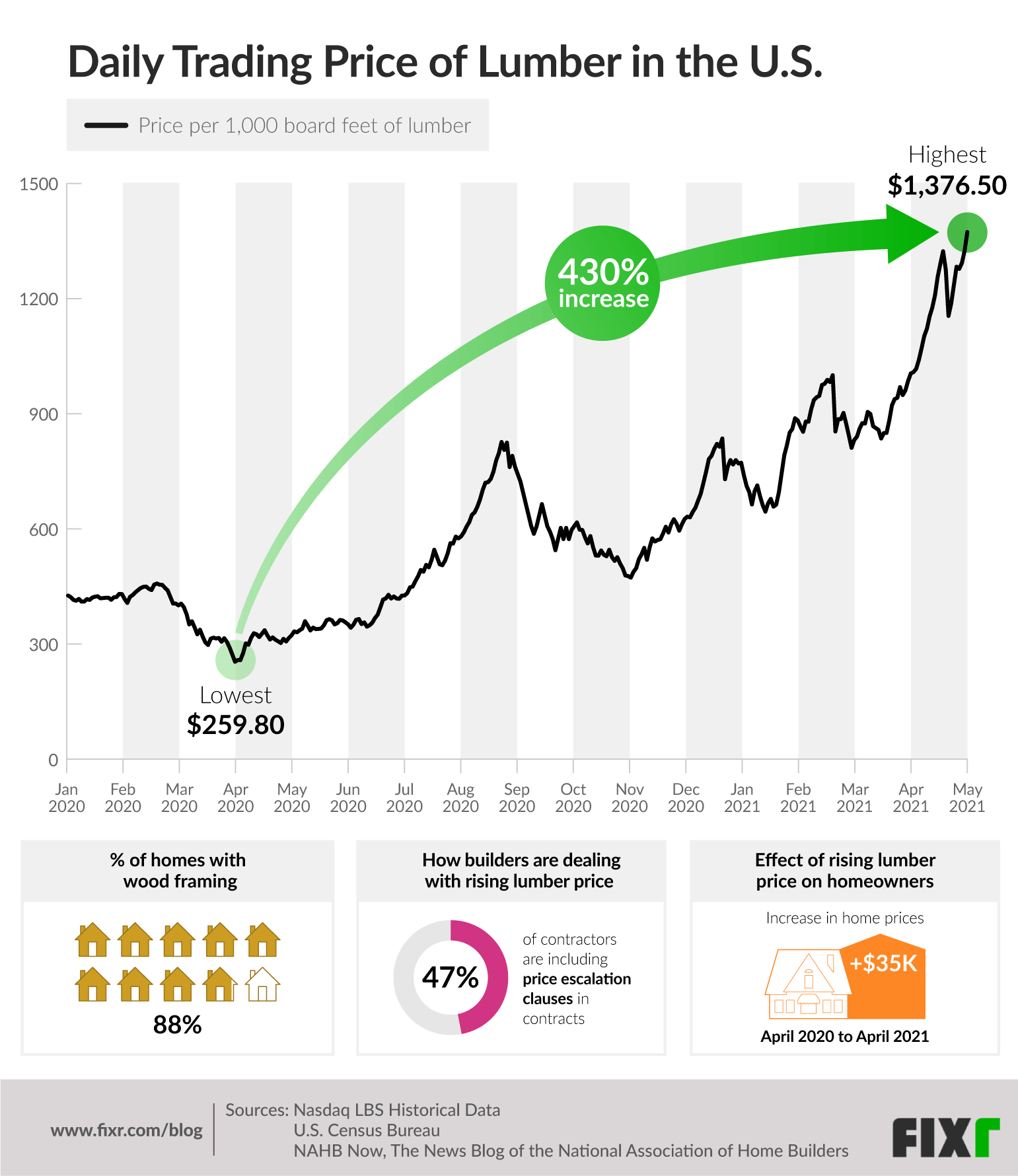 How Are Construction Companies Handling The Lumber Price Increase?

When prices of a commodity like lumber begin to increase, the impact is felt first by those directly purchasing them. In this case it is the lumber yards who are stocking the material. As a result, they need to start raising the prices of the lumber they sell to builders. Builders are then forced to start making decisions about these costs and how they will deal with them both now and long term.

When surveyed, 47% of builders have said that they are incorporating price escalation clauses in sales and construction contracts as a way to deal with the increased costs. These clauses can take on a few different looks.

Some clauses dictate a shared cost, resulting in builders and homeowners each absorbing some of the cost. Price escalation clauses, however, can be negotiated into contracts to cover any price increases that occur during building, such as that of lumber. These clauses tie the cost of the final home to the cost of lumber, meaning that if lumber prices keep increasing, so does the final price the homeowner will pay.

For some families, this creates a risky proposition, where they are unable to fully plan or prepare financially for the cost of the total project.

Builders are attempting to mitigate costs in other ways as well, such as pre-ordering lumber at current prices and delaying building during cost spikes, but this can only deal with the issue in the short term. Eventually, the cost of lumber will be too much for builders to handle on their own, and price escalation clauses may become the norm.

Are Families Paying the Price?

With these clauses being added to housing contracts, the cost of building a new home is getting exponentially higher. Robert Dietz, SVP & Chief Economist at the National Association of Home Builders explains “Ultimately, home buyers and renters will pay the price. Based on current lumber price gains, we estimate a $35,000 increase to new home prices and almost a $120 a month impact on rents.” With new home costs already higher than many lower-income families can afford, these changes may price lower income families out of the new home market altogether.

For every $1,000 price increase in the cost of building a home, 150,000 families are priced out of the market. With a $35,000 increase, this translates to 5.5 million families being unable to afford to build.

Consequently, the higher cost of a new home build will force some families to turn to existing homes. But the cost of lumber will also impact renovations and repairs, forcing the costs of all homes to rise as well. For families leaving the cities and attempting to purchase homes in suburban and rural areas, these higher costs could mean that fewer people will be in a position to purchase a home, let alone build a new one.

Scott Reaves, Director of Forestry Operations at Domain Timber Advisors believes that these price hikes may deter some from buying a new home: “Volatile raw material pricing certainly makes bidding on and securing new contracts more difficult. We could also see the higher prices eventually having a mild chilling effect on consumer demand for new housing but given current sentiment it may be a while before that occurs.”

The cost of lumber has already increased to record high numbers, but the final costs and the eventual fall out from these costs has yet to be completely realized. Reaves adds: “Right now, we expect elevated lumber prices through the spring and summer. As mills continue to ramp up production to meet current demand, we expect to see lumber prices begin to fall off a bit later in the year from recent peaks but have no expectation that they will fall as low as they were in late 2019 (~$300-350 per 1,000 board feet).”

The price escalation clauses being included in housing contracts means that this price increase will not be fully paid for in the immediate future. This could in turn cause even higher housing prices across the board, and a higher price to pay for many families.