How Much Does It Cost to Install a Suspended Acoustic Ceiling?

Average range: $955 - $1,510
Low
$899
Average Cost
$1,490
High
$2,710
(130 sq.ft. of suspended textured ceiling panels with L-style trim, installed)
Get free estimates from soundproofing contractors near you
Here's what happens next
Step 1
Answer a few questions
Tell us what you are looking for.
Step 2
Find out how much your project will cost
The contractors will offer competitive free quotes for your job.
Step 3
Compare the quotes and hire
Compare the estimates and hire the contractor who best fits your needs.

A “drop ceiling” is any secondary ceiling hung below the main ceiling. Although the terminology may be confusing to some, a drop ceiling is the same thing as a suspended acoustic ceiling. It’s also referred to as T-bar ceiling, false ceiling, grid ceiling, drop-in ceiling, drop-out ceiling, or ceiling tiles. The national average cost for installing a drop ceiling is between $955 and $1,510, with most people paying around $1,494 for a 130 sq.ft. plastic suspended ceiling with trim.

Want to receive more accurate estimates for your project? 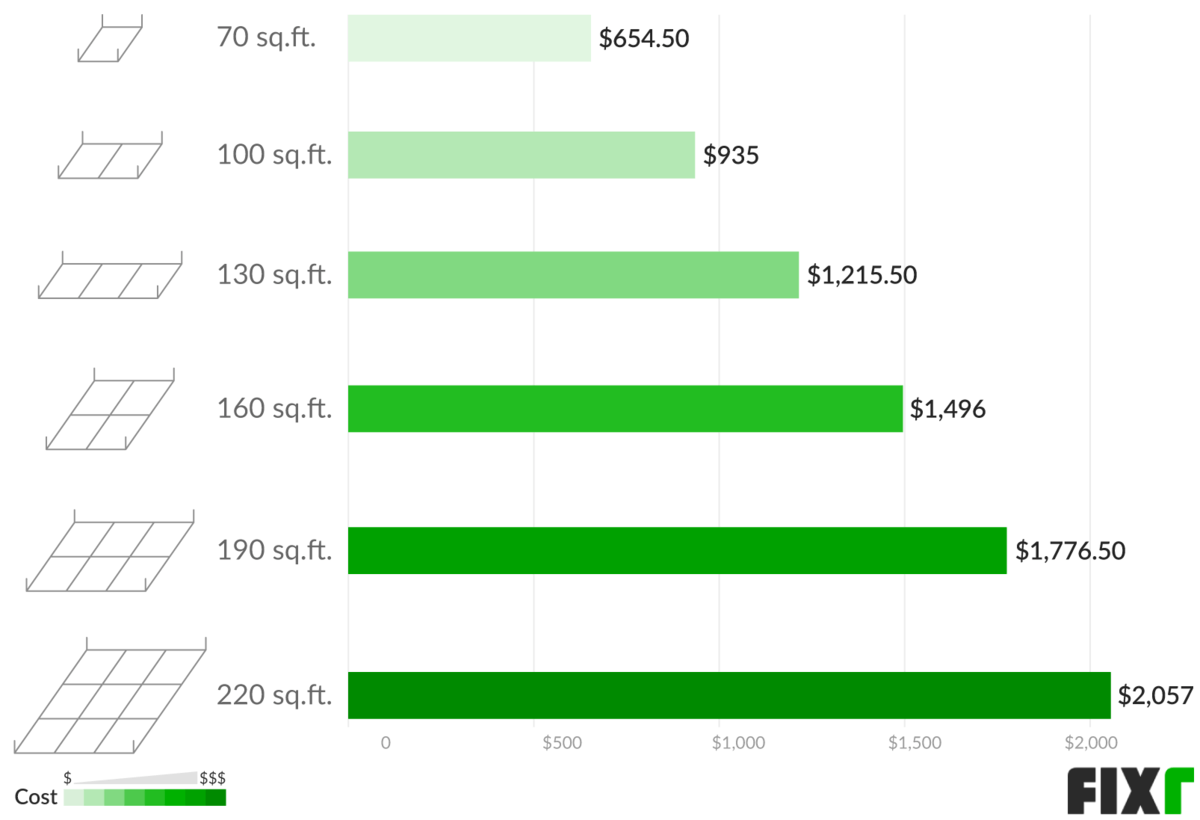 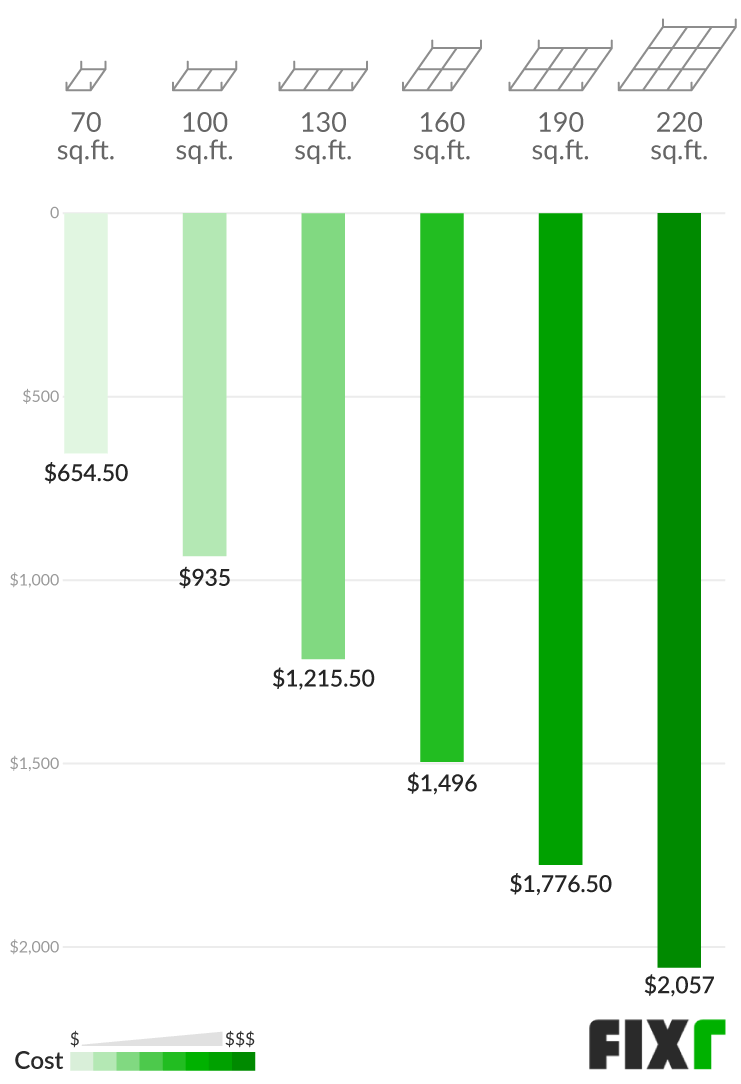 Compare prices from acoustic ceiling installation experts near me

Suspended ceilings consist of two parts: the grid and the tiles. The grid consists of a system of T-bars that is attached to the walls and holds the ceiling tiles/panels in position. You can expect to pay anywhere between $1.50 and $2.25 per square foot for the grid rails, without installation. The added cost of hiring a handyman or a licensed contractor is between $35 and $80 per hour. 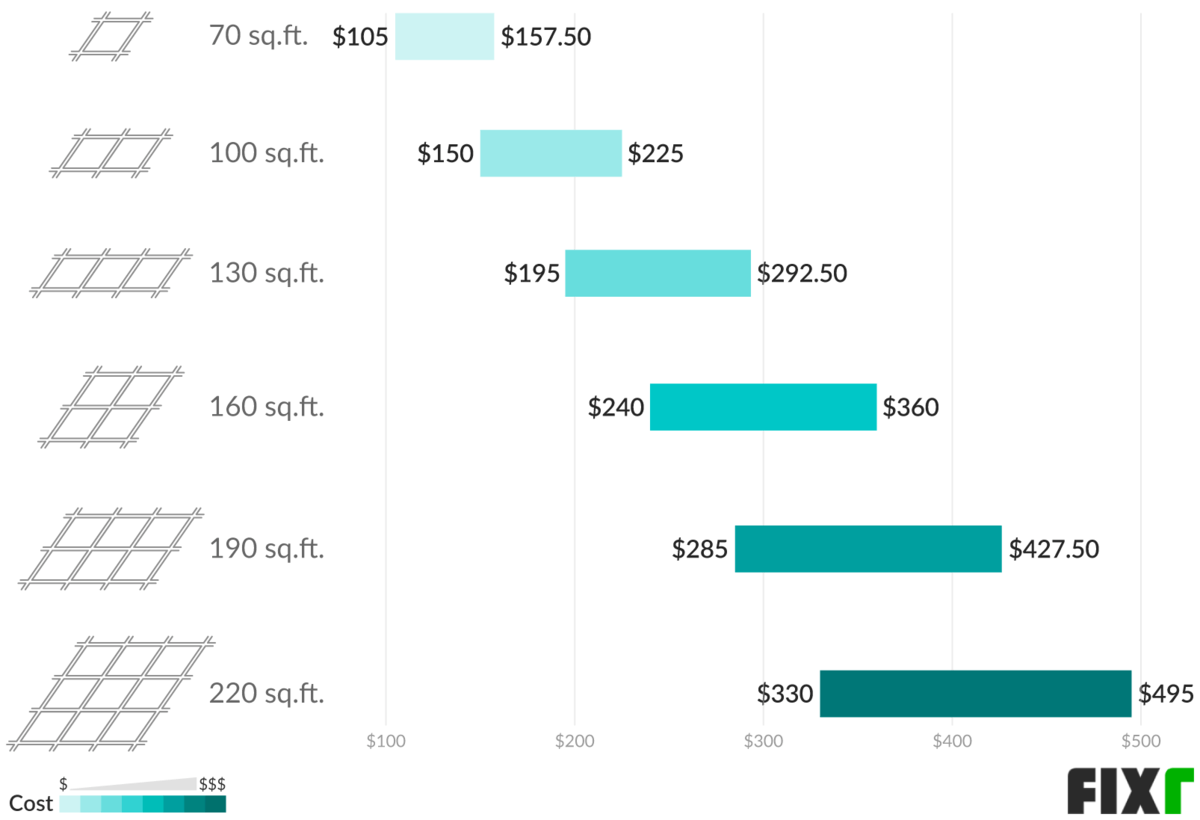 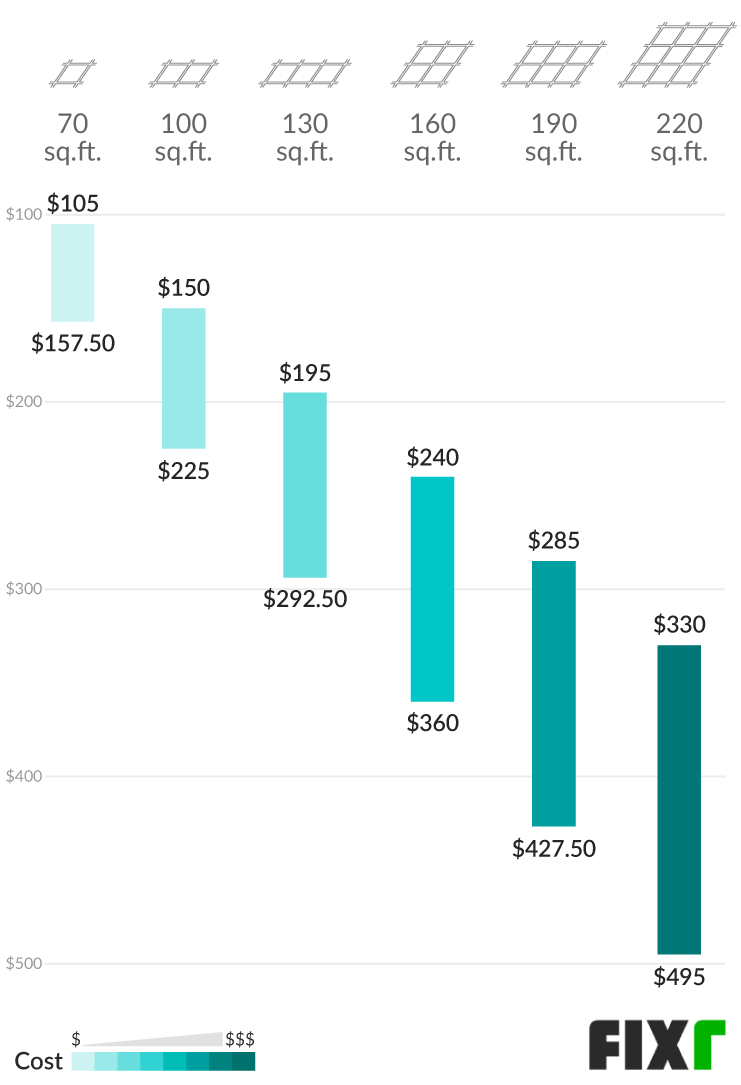 There are different tile materials you can use for your drop ceiling, all of which provide different features and come at different prices. The most commonly used materials for drop ceiling tiles are wood, mineral fibers/fiberboard, plastic, and tin/metal. 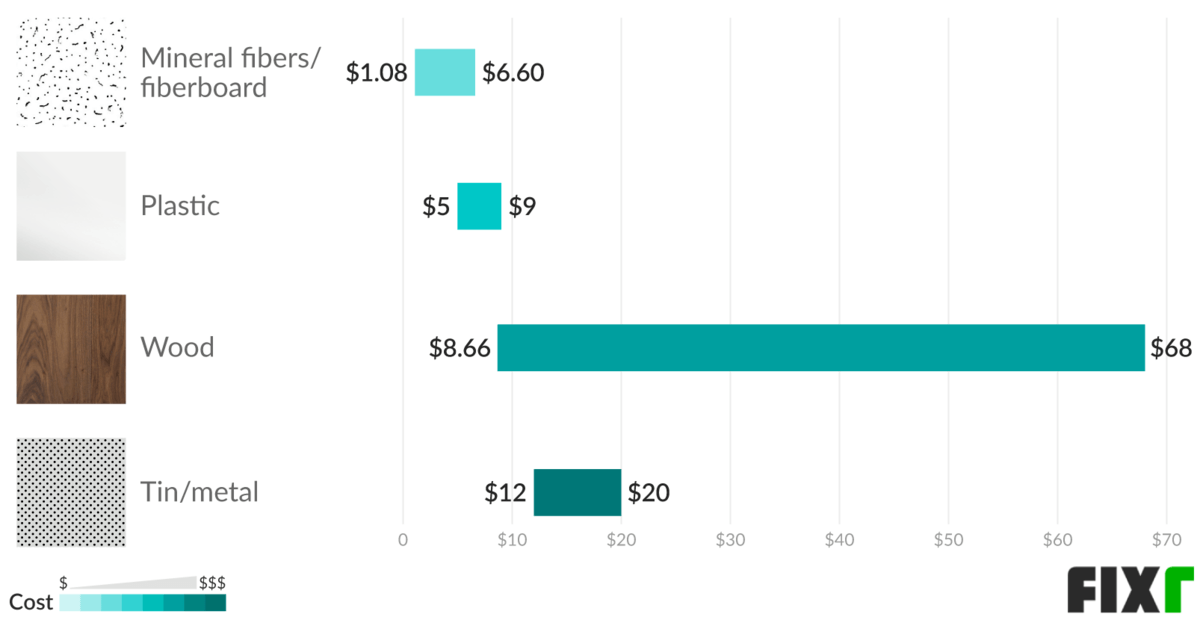 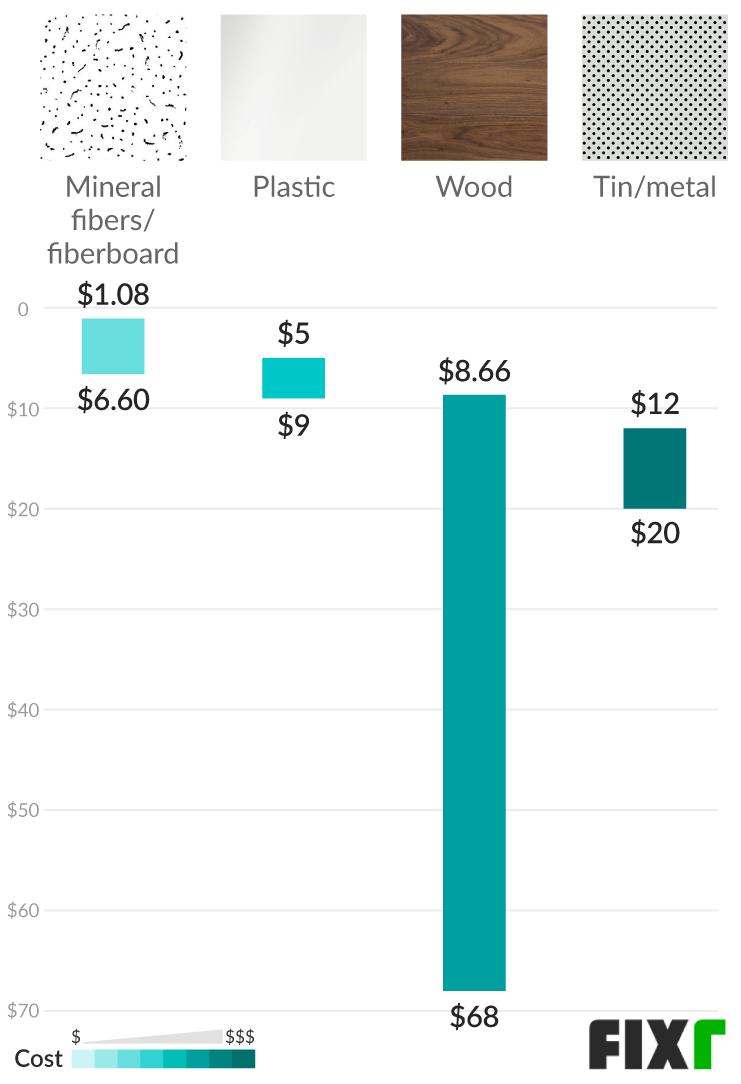 The exact cost of a ceiling tile depends on the manufacturer, as well as the design of the tile itself (smooth, textured, or patterned).

Mineral fiber tiles are the most common type used for acoustic ceilings. This is because they have the most acoustic properties for the best price. They are very sound-absorbent while still being relatively affordable and easy to install.

The main downside of mineral fiber tiles is that they have to be installed in a dry environment. If there is any moisture around them, you will quickly notice yellow stains or other discoloration on the tiles, and other similar damage.

One of the biggest advantages of using plastic tiles for your drop ceiling is how easy they are to install. They can be dropped in using grid rails or nailed up, and even if they get damaged during the installation process, you can always paint them in another color and cover up the dents.

However, as they are made from plastic, they aren’t as durable as other materials, so they can break more easily.

Wood tiles can give a more rustic and luxurious look to a room. Their cost can range anywhere from $8.66 for an oak tile to as high as $68.00 for a cherry wood tile.

Although they lend an elegant look to the space, wood tiles are very vulnerable to rot and warping if they are installed in areas with moisture, so they aren’t the best choice for houses in locations with high humidity levels.

Contrary to their name, tin/metal tiles are not really made of tin today, but rather from aluminum, copper, or brass. They usually come with different patterns that add a dramatic visual impact to the home and are the most durable out of the types of drop ceiling tiles we listed. But, that durability comes at a price, so they are also the most expensive ceiling tiles and the most difficult ones to install. 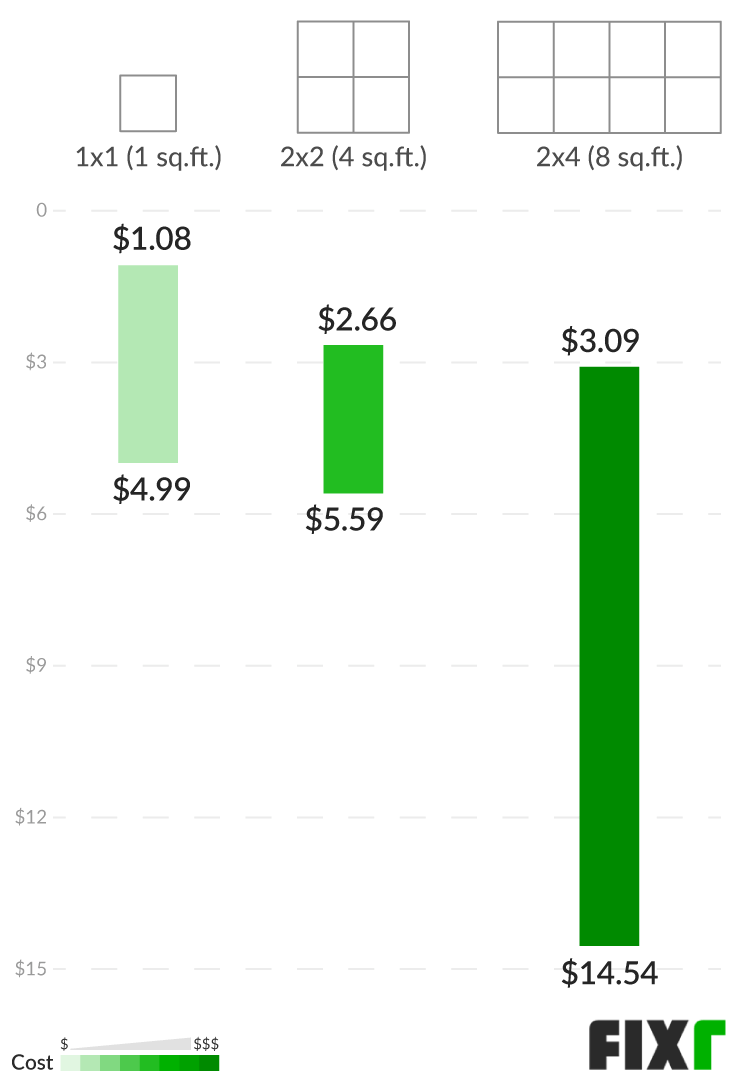 Get free estimates from acoustic ceiling installers near me

As we mentioned in the beginning, a drop ceiling or suspended acoustic ceiling is a secondary ceiling hanging below the main ceiling. A structure consisting of metal tracks is suspended from the main ceiling using wires to create the grid framework where the panels or tiles will be laid. Typically, a minimum space of 4 in. is required between the main and suspended ceilings, plus an additional 2 in. space if you want to install ceiling lights.

After the grids are secured, the acoustic ceiling installer will start laying out the tiles between the tracks to form the suspended ceiling. Typically, a professional acoustic ceiling installer charges $53.20 per hour on average, while hiring a handyman to install your drop ceiling costs between $35 and $80 per hour. The speed of installation depends on the experience of the installer, with experts being able to install 30 to 40 square feet in only an hour, which would mean installing grid tiles in a 130 square feet room would take 3 to 4 hours to finish. However, considering there are other things involved before installing a grid such as inspection of the area, constructing the framework, and hanging the grid tiles, it may take up to three days to complete the installation.

The labor costs to replace a damaged drop ceiling are typically between $50 and $80 per hour for a handyman and $70 to $135 for a licensed contractor. They typically do 30 to 40 square feet per hour, which means replacing a 130 square feet drop ceiling would take around 3 to 4 hours, with the added cost of installing the new drop ceiling tiles ($150-$540).

Drop ceilings allow you to choose the design, shape, and color of your suspended ceiling and are more affordable than installing drywall. However, drywall is not only more durable, but it will also give your home a more polished look than a drop ceiling would. Drywall ceilings are installed by attaching pieces of sheetrock to the structure of your home. A sheet of drywall costs anywhere between $12 and $60 for a 4’x8’ piece, depending on the thickness and any added features of the drywall piece. A basic ½” sheet of drywall costs $12 to $18, while mold-resistant drywall sheets can run from $15 to $60. 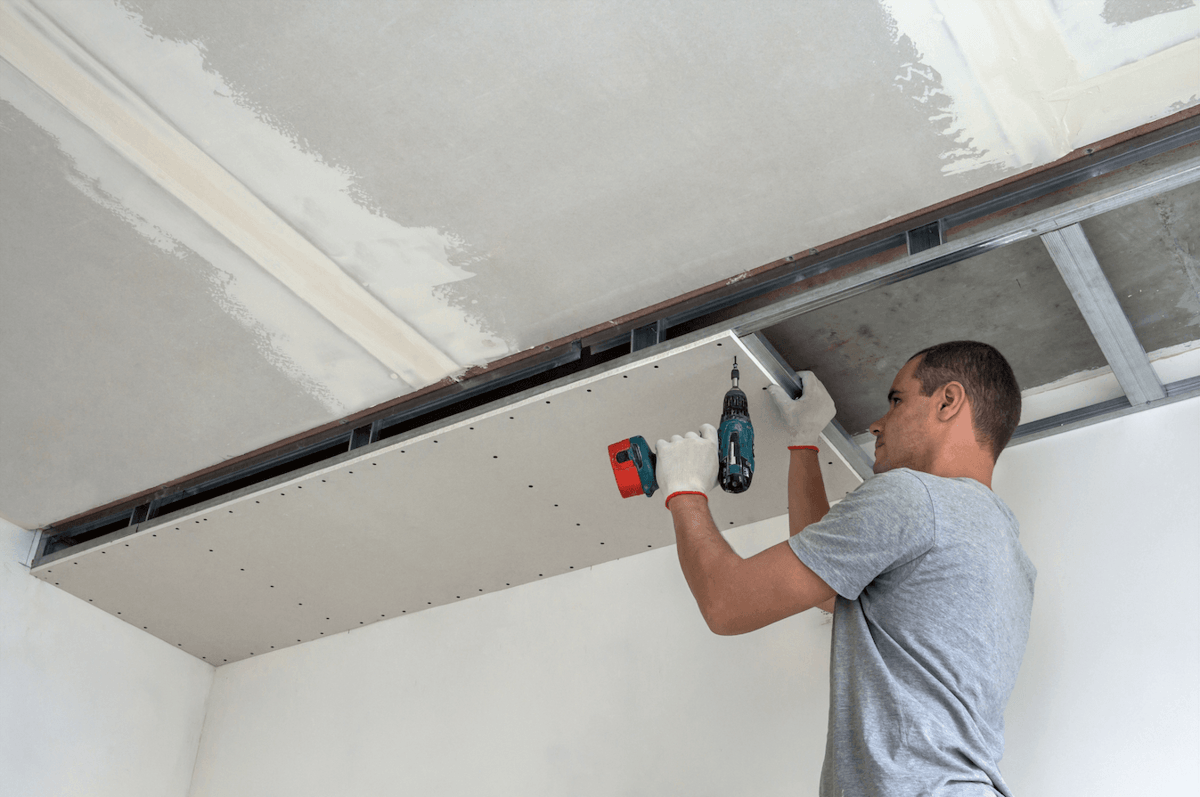 Advantages and Disadvantages of Suspended Ceiling

One of the major advantages of suspended ceilings is that they can be easily installed in any home or office. A suspended ceiling is also an inexpensive solution to cover up any pipes, ductwork, stains, or peeling paint on your ceiling. They come in different sizes, shapes, colors, and designs so you can customize and change the appearance of your room, without spending thousands of dollars on renovation costs. Because they are relatively easy to remove, you can replace or repair them easily, or add lights between the panels for an added visual impact.

Another benefit of drop ceilings is the insulation and sound-proofing they offer. You can completely block the sound from outside by using fiberglass or other sound-proof tiles and enjoy the silence and comfort of your home without interruption.

If you have peeling paint or cracking on your ceiling, a drop ceiling is not a good solution to simply cover up the problem instead of getting to the root of it and properly repairing it. Other downsides include that suspended ceilings are not as durable as traditional ceilings, so they may deteriorate faster, or even fall during a major disturbance. There is also an added risk of the installed fixtures falling, so suspended ceilings require a lot of maintenance to maximize their lifespan.

The overall cost of a drop ceiling is determined by several factors: the size of the ceiling, panel material, panel quality, complexity of the work, and whether lighting is included in the job or not.

Logically, the bigger the size of the ceiling, the higher the cost, but sometimes, a smaller ceiling may cost more if installing a suspended ceiling is more complicated. For instance, if pipes or wires are in the way of installing the suspended ceiling, they need to be relocated to another area, which would result in additional costs. The main ceiling may also need repair or modification so it can support the drop ceiling. All of this comes at an additional cost, so the complexity of the job is a major factor in the total cost of a suspended acoustic ceiling.

The durability and quality of the panel material determine the cost of the panels. If you want durable, sound-proof metal panels, they would cost you more, while wood or plastic panels are a more affordable option that, unfortunately, don’t last as long and provide minimal insulation.

Find the best acoustic ceiling installer near me

Drop-out tiles are heat-sensitive tiles that work in conjunction with the fire sprinkler system. They are designed to melt and fall from the dropped ceiling in case a fire breaks out, allowing the sprinkler system to activate and extinguish the fire.

Drop ceiling LED panels are panels that emulate light. They are usually installed to avoid installing ceiling fans or additional lighting fixtures. LED lights usually cost between $85 and $170 each, while recessed light fixture prices start from $30 and up. If you install lighting, you also need light controls, which cost between $20 and $35.

A ceiling fan is a mechanical fan that hangs from the ceiling and rotates its blades to provide ventilation to the surrounding area. The cost of installing a ceiling fan depends on the exact type you choose and the location where you will install it, with the average cost being $450-$700​.

A drop ceiling and a suspended ceiling are the exact same thing.

The drywall cost per square foot is lower than the cost for a drop ceiling, but as it often requires other repairs and additions, the total cost can be higher for installing drywall.

The average cost to install a drop ceiling is $5-$9 per square foot.

Typically, a minimum space of 4 in. is required between the main and the suspended ceiling, with an additional 2 in. if you want to install ceiling lights, so you lose around 6 in. in total.

To figure out how much work an acoustical ceiling would require, you first need to calculate the square footage of the ceiling area where you want to install it. You can do this by measuring the shorter and longer sides of your room and multiplying those numbers. That’s how much square footage of drop ceiling tiles you would need, but to be safe, add around 15% overage to take into consideration the waste factor.

The cost of grid rails ranges between $1.50 and $2.25 per square foot for the rails only, with no installation included. Hiring a handyman to install your drop ceiling costs between $35 and $80 per hour, with professionals installing between 30 to 40 square feet of grid in an hour.

How much does it cost to install a suspended acoustic ceiling in my city?

Cost to install a suspended acoustic ceiling varies greatly by region (and even by zip code). To get free estimates from local contractors, please indicate yours. 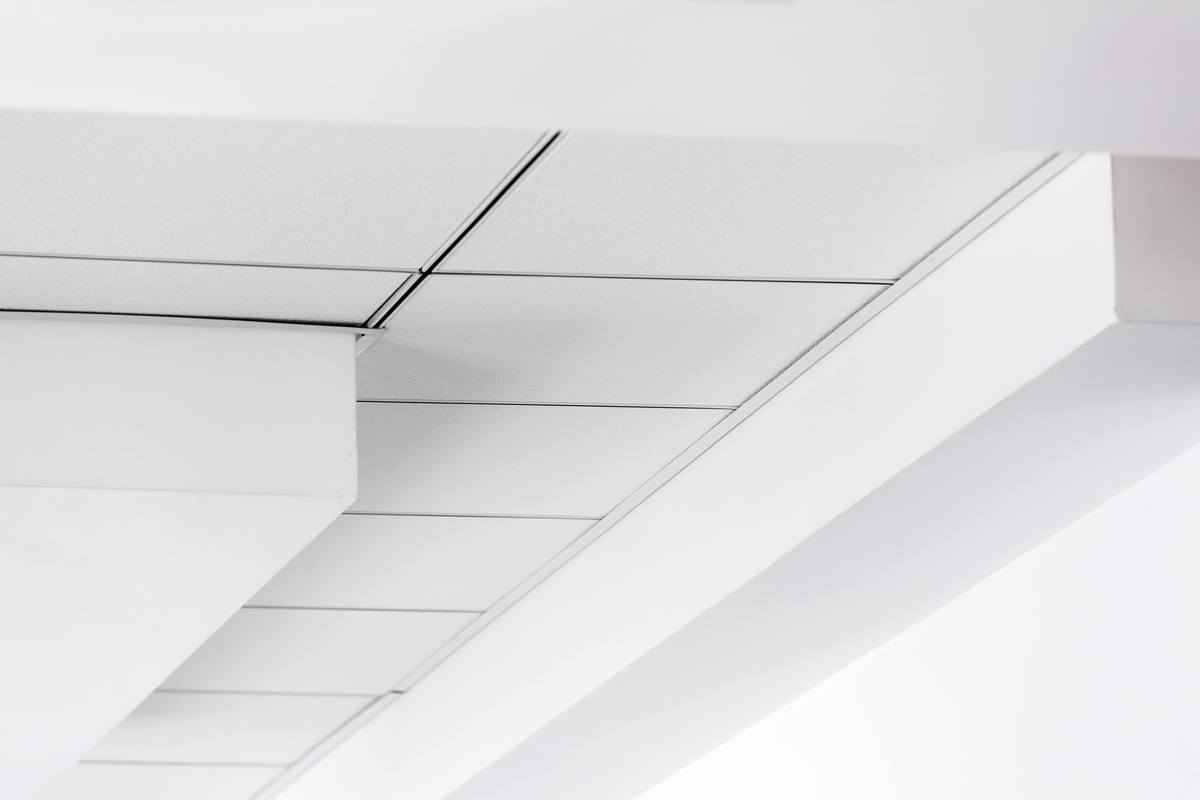 Find soundproofing contractors near you