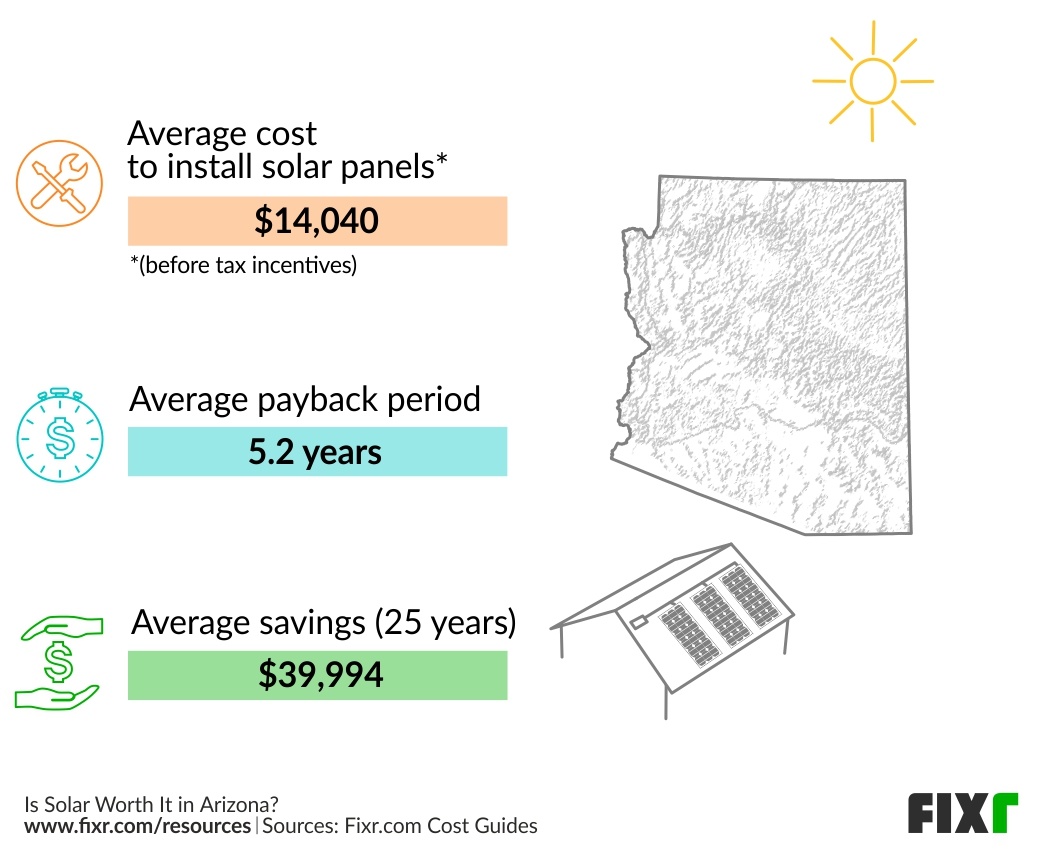 Solar power, the most popular renewable energy source, continues to gain traction as electricity prices in the US rise each year. Arizona’s electricity rates are below the national average; however, they rank as the 7th highest household consumer of electricity, utilizing, on average, 1,114 kWh per month while the average US consumption rate is 893 kWh per month.

With over 300 sunny days per year on average in Arizona and multiple incentives offered, it is no wonder solar is growing in the state. For those considering installing solar, it is important to consider all costs, applicable incentives, and savings together in order to ensure that a system is right for your property and budget. The following article discusses options and costs to help answer the question: Is solar worth it in Arizona?

Cost vs Savings on Solar Panels in Arizona

In Arizona, the average cost of a grid-tied solar panel installation is between $12,900 and $15,180 with most homeowners paying approximately $14,040 for a 6kW grid-tied monocrystalline panel system. Homeowners who opt to install off-grid systems experience higher costs with the average range between $28,000 and $58,000. Individual installation costs are determined by four main factors: panel type, inverter type, system type (grid-tied vs. off-grid), and labor costs. Below, each factor is explained in more detail.

An inverter is an integral part of any solar installation as it converts the DC (direct current) power produced by the panels to the AC (alternating current) power that your home utilizes. Many systems use string inverters, as they are the most common and cheapest option ($85 - $105 per inverter); however, there are some downfalls with this type. They must be connected between each panel which leads to higher labor costs and the entire system can become compromised if even one single inverter fails. Power optimizers and microinverters cost more than string inverters ranging between $125 and $150 per inverter on average, but because they do not need to be connected, they reduce overall labor costs and are more reliable. Off-grid systems and grid-tied systems that will include batteries must utilize a battery inverter. Battery inverters add significant cost to the system of between $2,000 to $3,000 per inverter.

Off-grid systems are legal in the state of Arizona as long as local regulations regarding battery storage and permit requirements are adhered to. These systems are not as popular as grid-tied and cost significantly more due to the demands of the system which include it being large enough to power the entire home and have sufficient battery power available for when the sun is not actively shining. Batteries and battery inverters are required for off-grid systems which also increases the price. Grid-tied systems offer some more flexibility as they need not cover the entire home’s consumption rate so can be built to meet a homeowner’s budget.

Labor costs can fluctuate due to multiple factors. Big city areas like Phoenix carry higher rates than other areas and things like the slope of the installation location, the type of panels and inverters selected, and the overall size of the system will also play a part. On average, the labor costs for a 6kW system range between $5,160 and $5,520.

Seeing that the average lifespan of a solar panel system is 25 to 30 years, overall savings amounts are most often calculated over a 25 year period of time. Determining the overall savings is fairly straightforward and includes a few key data points that are specific to the area in which solar is to be installed. For the state of Arizona, the average solar production (16,425) is multiplied by the average electricity rates (12.27 cents/kWh) resulting in the annual average savings of $2,015. This is then multiplied by a factor of 25 to account for the savings time period, and the resulting amount is reduced by the initial cost of the system (taking the 26% federal tax credit into consideration). After all calculations are complete, total overall savings equate to $39,994 for a 6kWh grid-tied system in the state of Arizona.

The high value of overall savings in Arizona help contribute to a low payback period of only 5.2 years. This means that in 5.2 years time, the system will pay for itself!

What Incentives Are There in Arizona?

Arizona doesn’t offer as many incentives as some other states do; however, residents can still benefit from multiple programs designed to reduce costs.

Like every state, the federal solar tax credit of 26% is available to those earning income and filing taxes. There is no cap to the amount that can be claimed, so the more expensive the system, the more credit to be gained. A note of caution: The credit amount will be reduced to 22% at the end of 2022 so it is important to consider how this might affect overall costs and savings.

In addition to the federal solar tax credit, Arizona offers their own state tax credit in the amount of 25% of the total system cost, capped at $1,000. Like many other states, Arizona offers 100% sales and property tax exemptions. These help to reduce upfront costs by eliminating the 5.6% general sales tax rate and since solar installations can greatly increase a property value, it reduces concerns about rising property taxes.

In the past, utility companies provided more encouragement to homeowners to make the switch in the form of solar rebates and net metering than they do today. Due to many utility companies meeting their requirements for off-site solar electricity production, rebates have decreased and are only available to some rural electric co-op customers. Also, while net metering remains legal in Arizona, it is not mandated. For companies still offering the service, the rates to buy back extra electricity from the homeowner are quite low. While a low rate is better than no rate at all, these policies do give extra motivation to invest in batteries and store electricity overages for non-sun times. For those in areas serviced by the SRP utility company, solar batteries qualify for a direct rebate. Currently the offer is $300 per kWh of storage with a cap of $3,600.

It is important to note that all incentives can carry limits or expirations and should be reviewed carefully prior to making a purchase to ensure the home and system qualify.

Is It Sunny Enough in Arizona?

Arizona receives an average amount of 6.57 hours of peak sunlight per day which more than accounts for the recommended four hours. Top cities in the state range between 264 and 313 days of sunshine per year with those in the southern part of the state receiving more sunshine overall than those located further north.

Solar panels are built to last; however, they do carry low maintenance costs which ensure they operate at optimum performance.

In Arizona, it is recommended to have panels inspected and cleaned twice per year. The cost for twice yearly cleaning and maintenance ranges between $300 and $600 on average. Of course, these prices can vary depending on the size and location of the system. In the case of defective equipment being uncovered during the inspection, the repairs are most often covered by product warranties that are valid for 10-25 years after installation.

Is Solar Worth It in Arizona?

Arizona is ranked number two in the US for peak sunlight hours and cities across the state have plentiful sunny days throughout the year. The amount of sun coupled with the higher than average electricity use throughout the state provides a significant overall savings and a low payback period. These factors along with federal, state, and utility incentive programs make Arizona a worthwhile state to invest in solar. Before moving forward with any new installation, it is important to meet with local solar professionals who both have knowledge of incentives available and can help to determine the best system type to install for each unique situation.

Author:
Adam Graham is an industry analyst at Fixr.com. He analyzes and writes about the real estate and home construction industries, covering a range of associated topics. He has been featured in publications such as Better Homes and Gardens and The Boston Globe, and written for various outlets including the National Association of Realtors, and Insurance News Net Magazine.