How Much Does It Cost to Install Solar Panels in Connecticut?

Residents of Connecticut have many reasons to go solar and install solar panels on their homes. Connecticut has some of the highest electricity rates in the nation, well above the national average, and those rates have continued to climb over the last year. In contrast, residents who have switched to solar panels in Connecticut save more than $1,100 on average in energy costs each year. With solar buy-back programs in place, the potential to save even more is possible for some residents.

Cost of Solar Panels in CT by Type

Connecticut is a very solar-friendly state with multiple regulations that give you many incentives to install solar panels. For this reason, you have a few choices in how you can install and use your solar panels in this state. These can be loosely grouped into two installation types - grid-tied and off-grid.

In a grid-tied installation, you remain connected to the state’s power grid. In the event your panels are not producing enough power, such as at night or during inclement weather, you can still use the grid’s electricity. In Connecticut, you have the option of selling some or all of the power generated by your solar panels back to the electric company. So, if your system produces more electricity than you use, you can sell this excess back and reduce your energy bills more.

You can also disconnect completely from the electric grid by installing an off-grid system. In this case, you rely solely on the energy you can produce yourself through solar panels or a combination of solar with generators and wind power. This system must be larger than a grid-tied system and requires batteries to store electricity for when you need it later. Off-grid installations tend to be much more expensive than grid-tied installations. Below are the average costs to install both systems in Connecticut. 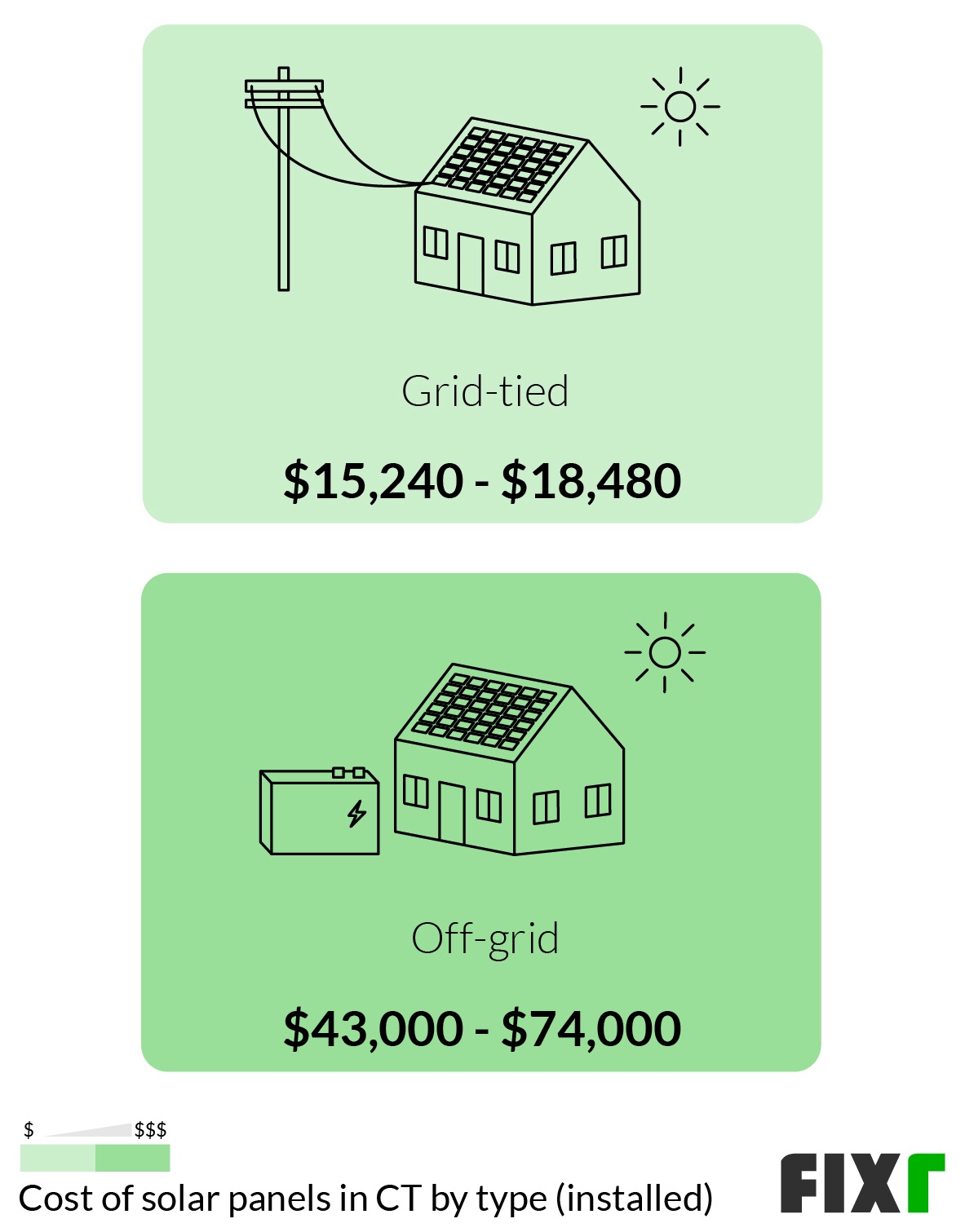 Solar panels are typically sold and installed by the watt. Each panel usually produces between 250 and 400 watts, with each watt costing between $2.54 and $3.08 in Connecticut. The number of watts you need depends on several things, including the home size, panel type, and your total energy needs. Some people use smaller systems to help offset energy costs, while others install systems large enough to handle their own needs and sell some energy back to the grid. With hot summers and snowy winters, Connecticut residents have high energy needs year-round, meaning most residents find 6 kW systems fit their needs best.

Below are the average costs to install differently sized systems in Connecticut and the average number of panels needed for a job of that size. 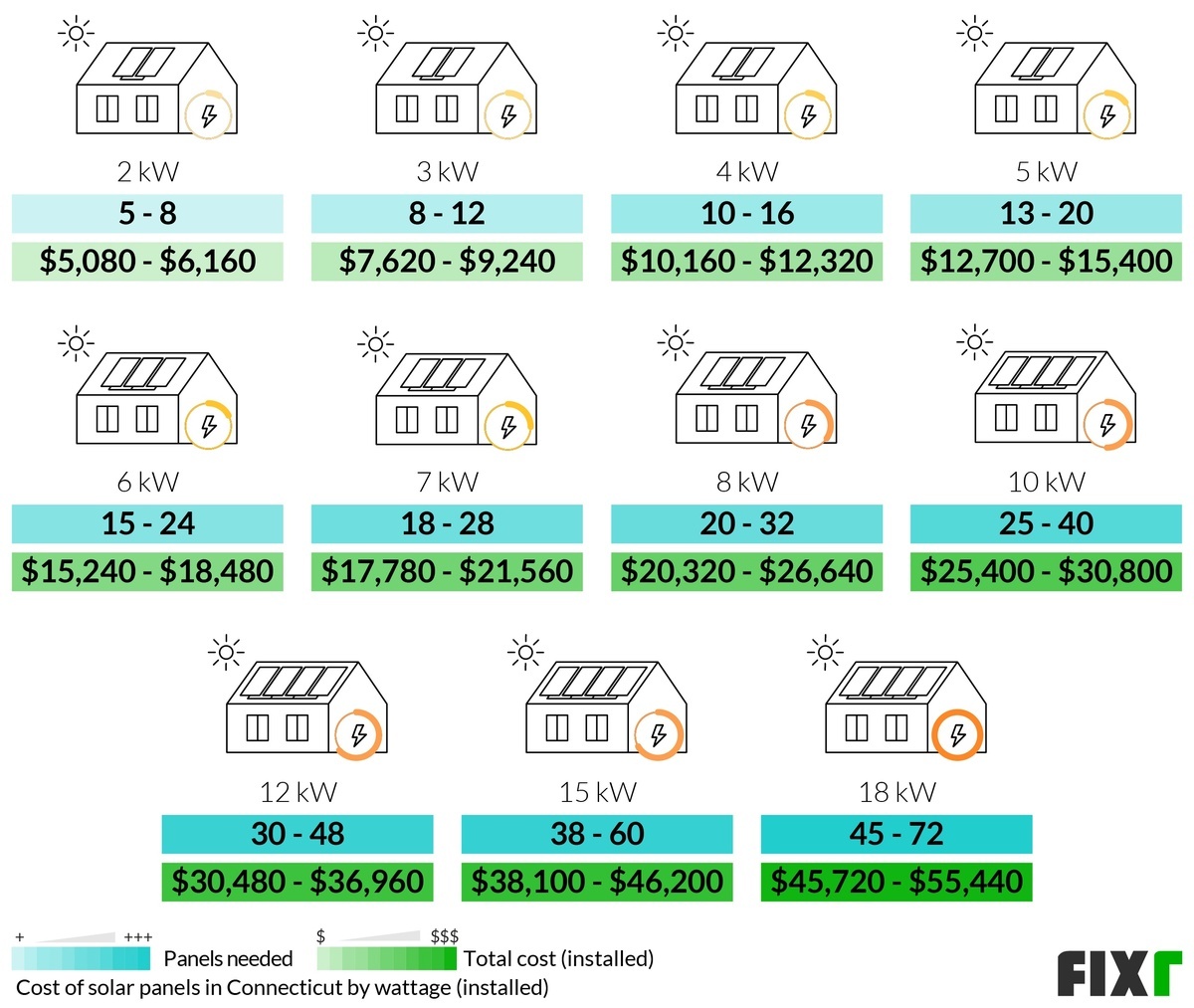 Average Cost of Solar Panels in CT per Square Foot

However, there can be a very wide range for each home size and some overlap between home and system sizes. Some people decide on a smaller system to run only a portion of their home’s energy, others purchase a system large enough to handle their energy needs with room to spare. Despite this, it is typical for larger homes to require more panels to meet even basic needs than smaller homes. Below are the average costs to install solar panels in Connecticut based on the home size. 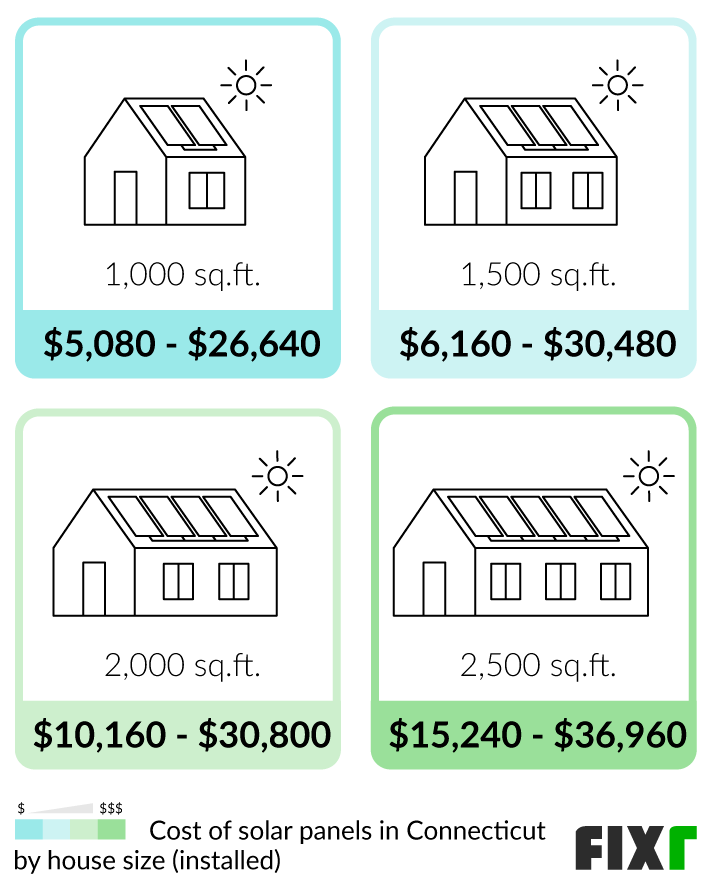 Cost of Solar Panels in CT by Cell Type

Solar panels can be found in several types. These types can be broken into three categories - polycrystalline, thin film, and monocrystalline. Of the three, monocrystalline is the most common in Connecticut, but it is also the most expensive.

Monocrystalline panels are made from whole silicone crystals. They are very efficient in direct sunlight and typically produce more energy than the other types. They have a mid profile and a sleek black finish.

Polycrystalline panels are made of pieces of silicone crystals, so they are less expensive than monocrystalline. These panels are slightly less efficient, however. They have a higher profile and a bright blue color, so they are more obvious when installed on the roof.

Thin-film panels have the lowest profile and are the most subtle of the three. They work best in overcast climates rather than direct sunlight. Given that Connecticut has roughly 194 sunny days a year, these panels may not be the best at producing energy unless you live in an area that gets less direct sun. Below are the average costs to install a 6 kW system using each panel type in Connecticut. 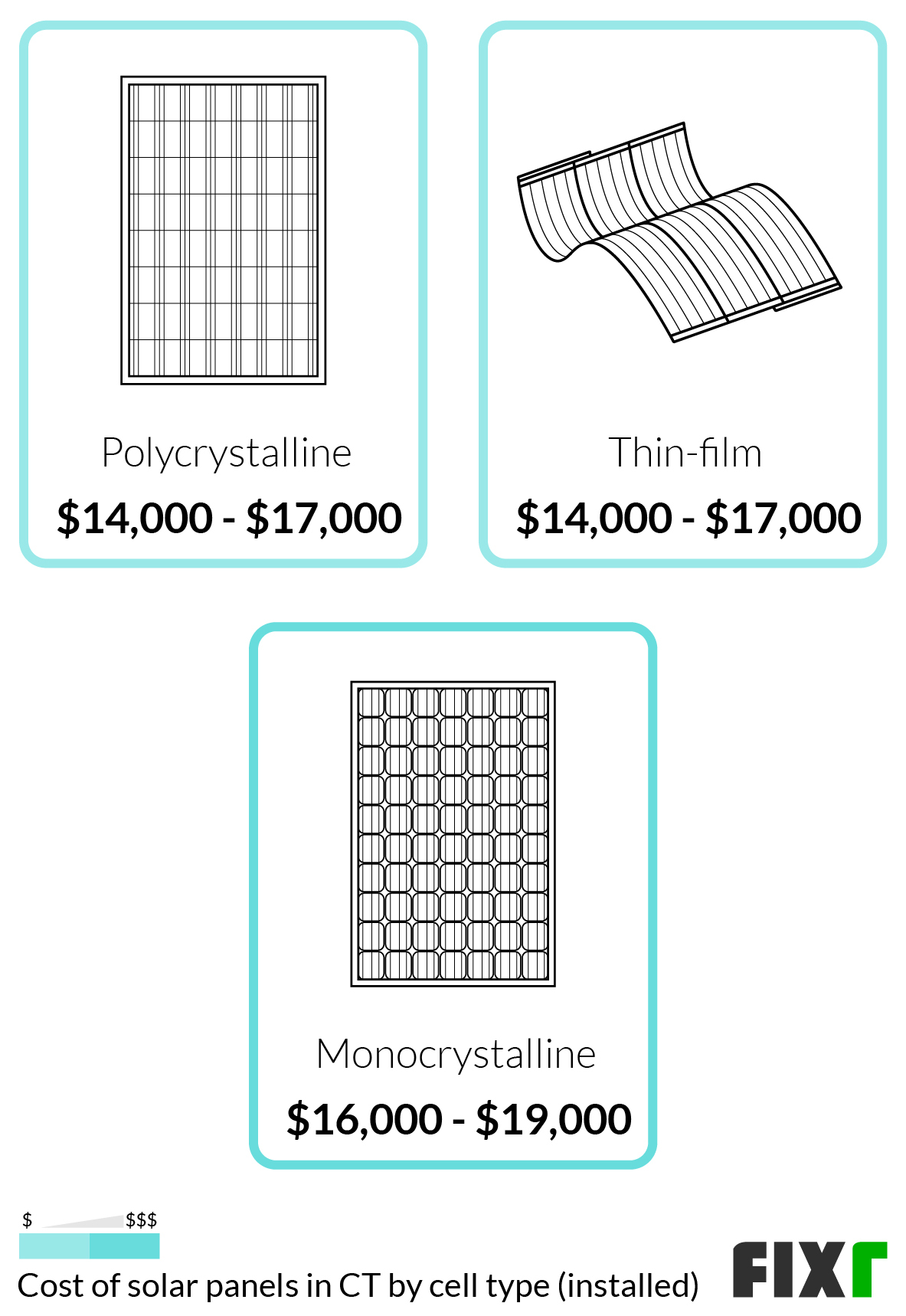 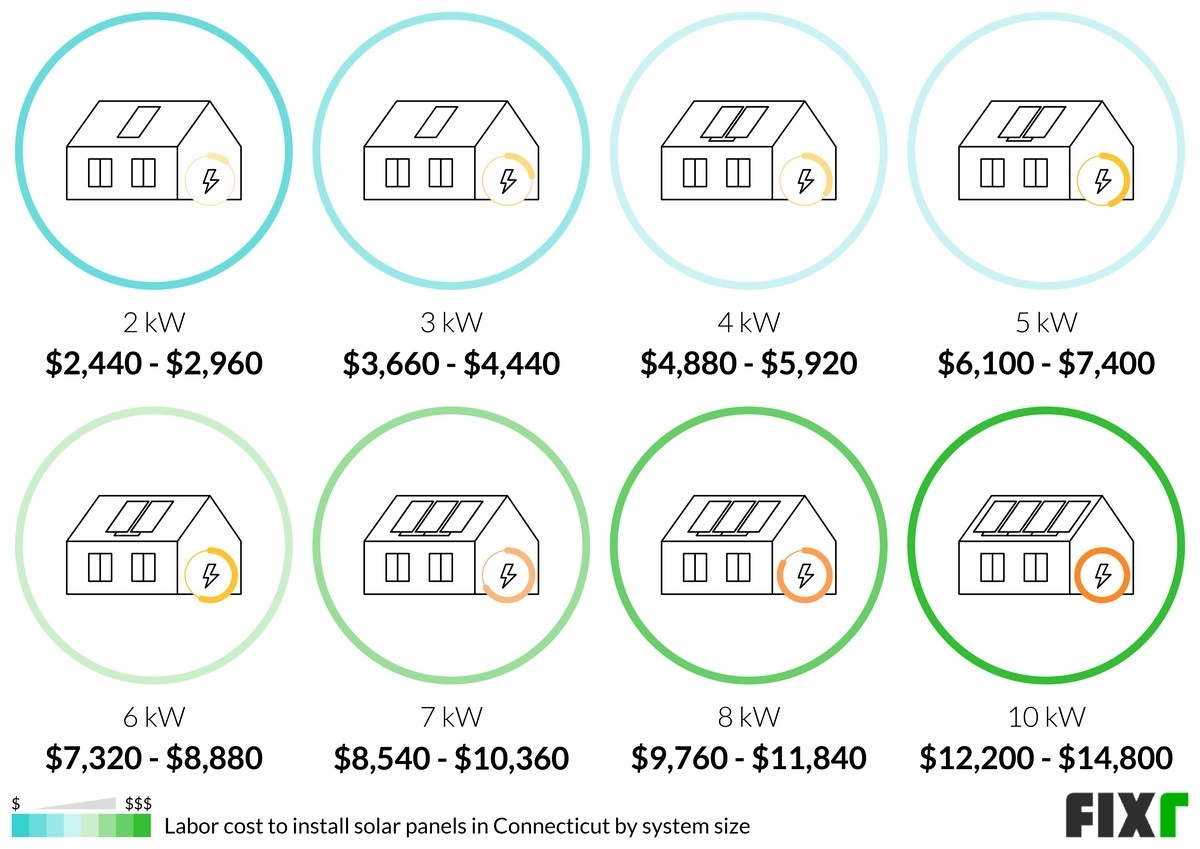 Get free estimates from trusted solar panel installation companies near me

Which Direction Should Solar Panels Face in Connecticut?

Arrange your solar panels to face south whenever possible. This ensures they get the most sun over the day. However, you can install them to the southeast or southwest without a significant dip in energy production if your roof is not positioned due south. In some cases, you can also arrange your panels to the east or west, but you should speak to your installer about how to maximize energy production because you may need a larger system to meet your needs.

Cost to Install Solar Panels in CT by Location

Most people in Connecticut install their solar panels on their roofs, but this is not the only place where they can be installed. Roof-mounted panels take up the least amount of space on your property. They are also the fastest and easiest to install because they can be readily connected to your home’s electrical system.

If your roof is too small for the system you are installing, it does not face the correct direction, or it cannot hold the weight of the panels, you can also install them on the ground. This is done on a larger, ground-mounted racking system, increasing the project cost. Typically, very large systems like those used in off-grid installations are installed on a ground array. This increases material and installation costs because wires must be run to your home underground to connect the system. Below are the average costs to install a 6 kW system in Connecticut using roof and ground-mounted installations. 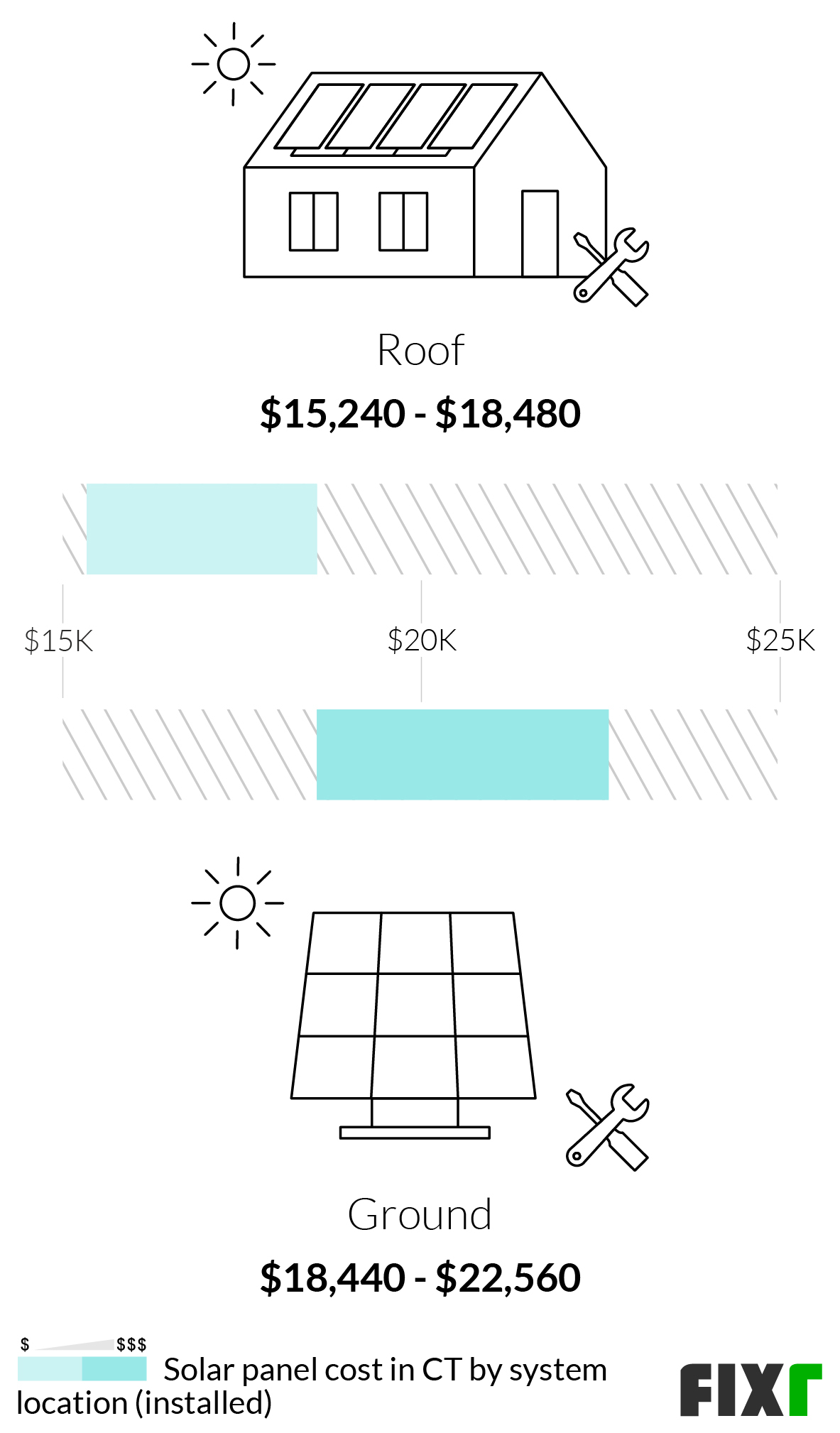 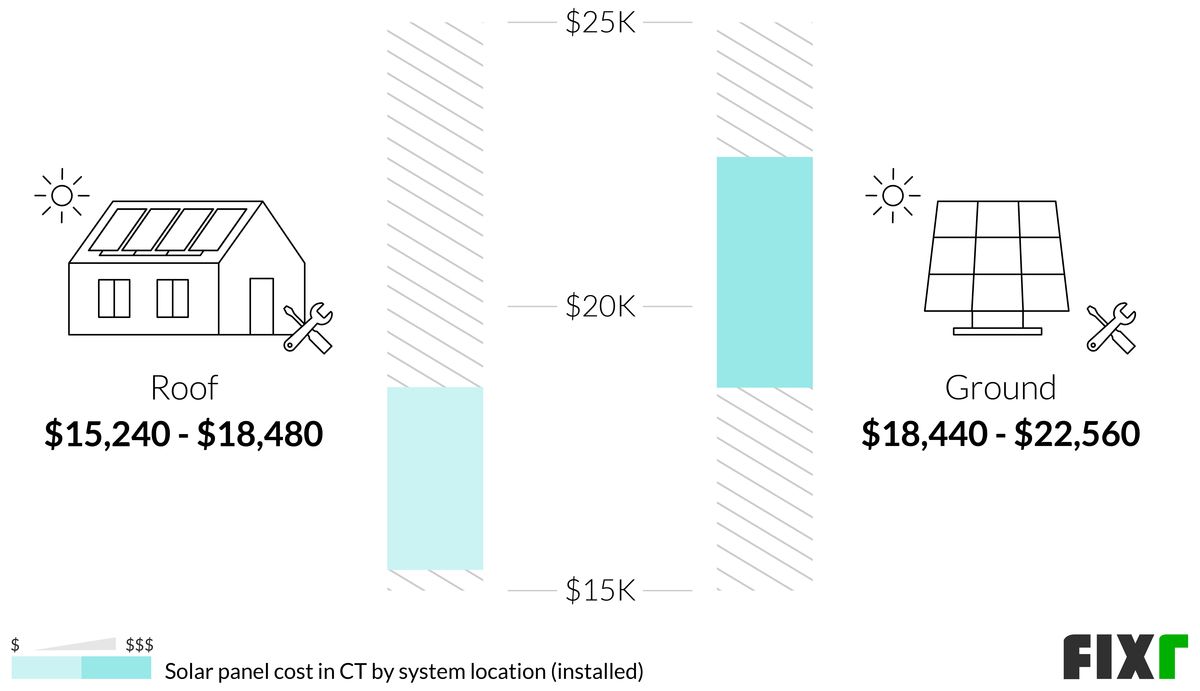 Connecticut residents can take advantage of the Federal tax credit of 30% through the end of 2022 when installing solar panels. For a 6 kW installation, this credit equals $4,572 to $5,544 for the average installation. While the state does not have its own tax credit, they have several other incentives and tax breaks for residents who go solar. These include a property tax exemption, meaning your property taxes do not increase with the installation of solar panels, and a sales tax exemption on the purchase of the panels. There are also some cost-reduction programs available to residents that can lower the costs of systems up to 25 kW installed. Speak to your local installer for more information on how to enroll.

For your solar panels to provide energy to your home, you need solar inverters. Inverters convert the energy produced by the panels into energy your home can use. The number of inverters that you will need will vary depending on the type that you choose. String inverters may only require one per system, for example, while microinverters require one per panel.

Inverters come in several types. String inverters are the most common and least expensive. Several solar panels are connected in a string, with several strings connecting one inverter, which is how they get their name. The drawback to this system is that if one panel goes down, the entire string stops working, lowering total output.

Power optimizers can be used with string inverters to help even out total output in the event of a panel dropping in production. They attach directly to individual panels; you will need one per panel. If one panel is in shade and lowering output, the power optimizers make sure the other panels don’t drop as well.

Microinverters are also installed one per panel, and attach directly to each panel. They help eliminate the issues with string inverters. While they cost less than string inverters per piece, however, you need more of them, which increases total costs.

If you have batteries with your system, you also need battery inverters to convert the energy into something the batteries can store. Below are the average costs for the different inverters. 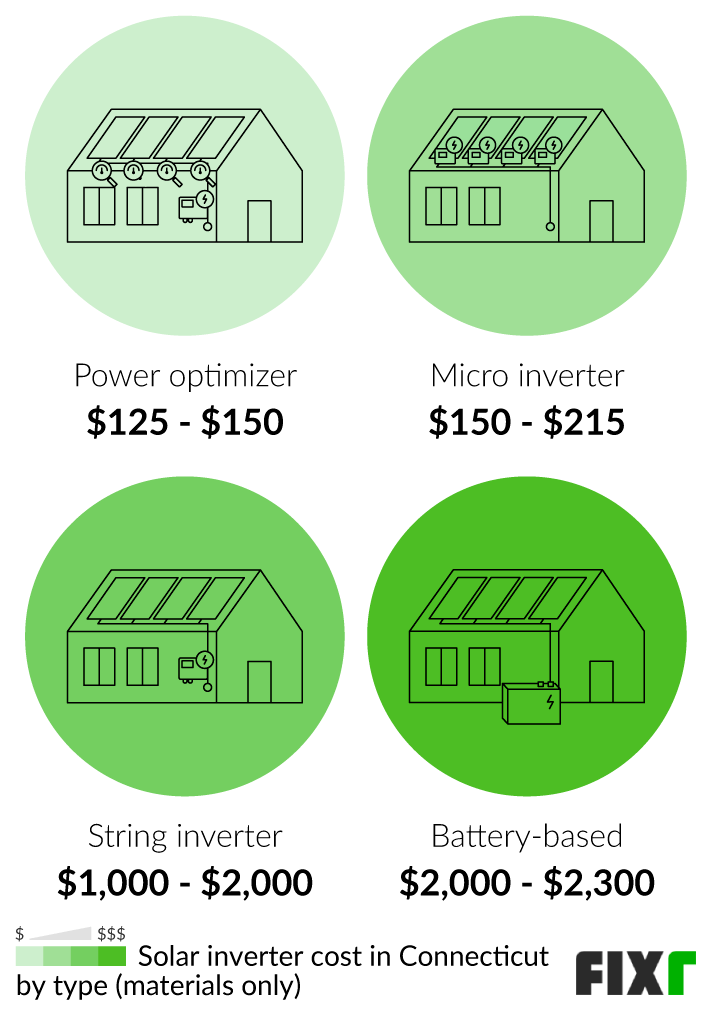 Cost to Run and Maintain Solar Panels in Connecticut

Solar panels do not require much maintenance. At most, they should be regularly cleaned and inspected to ensure they are working at peak efficiency. Small repairs can be made during inspections and cleanings, such as fixing loose wires that prevent the system from shutting down. In Connecticut, it is recommended that you clean and inspect your panels yearly, at a cost of $300 to $600. However, if you live in an area that sees more debris or wear, you may want them to come out two to three times a year, giving you yearly costs of $600 to $1,800.

You may also consider investing in snow guards for your panels because Connecticut sees a lot of snow in the winter. This has an average cost of $1.75 to $3 a linear foot installed.

These systems also have the option of using one of Tesla’s Powerwall batteries, which are priced at $10,000 each. This can increase costs, but can further decrease your dependency on the grid. The average costs to install a Tesla solar roof in Connecticut range from $60,000 to $80,000 for a 6 kW system on a 2,000 sq.ft. home fully installed.

Absolutely! Connecticut has higher-than-average electricity costs and sees more than enough sunny days each year to offset these costs for more residents.

The average cost to install solar panels in Connecticut ranges from $15,240 to $18,480 for a 6 kW system, but your costs may be higher or lower, depending on the system type and size you install.

Residents in Connecticut can take advantage of the Federal tax credit of 30% through 2022. In addition, the state offers sales tax exemption and property tax exemption on the panels.

Yes, Connecticut is very solar friendly and allows off-grid living, but you may be subject to some regulations.

Yes, the state does have net metering, and you can buy back 100% of your solar energy in some cases. 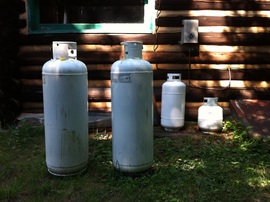 1 Propane: A hydrocarbon gas used as a common fuel source

How much does it cost to install solar panels in Connecticut in my city?

Cost to install solar panels in Connecticut varies greatly by region (and even by zip code). To get free estimates from local contractors, please indicate yours. 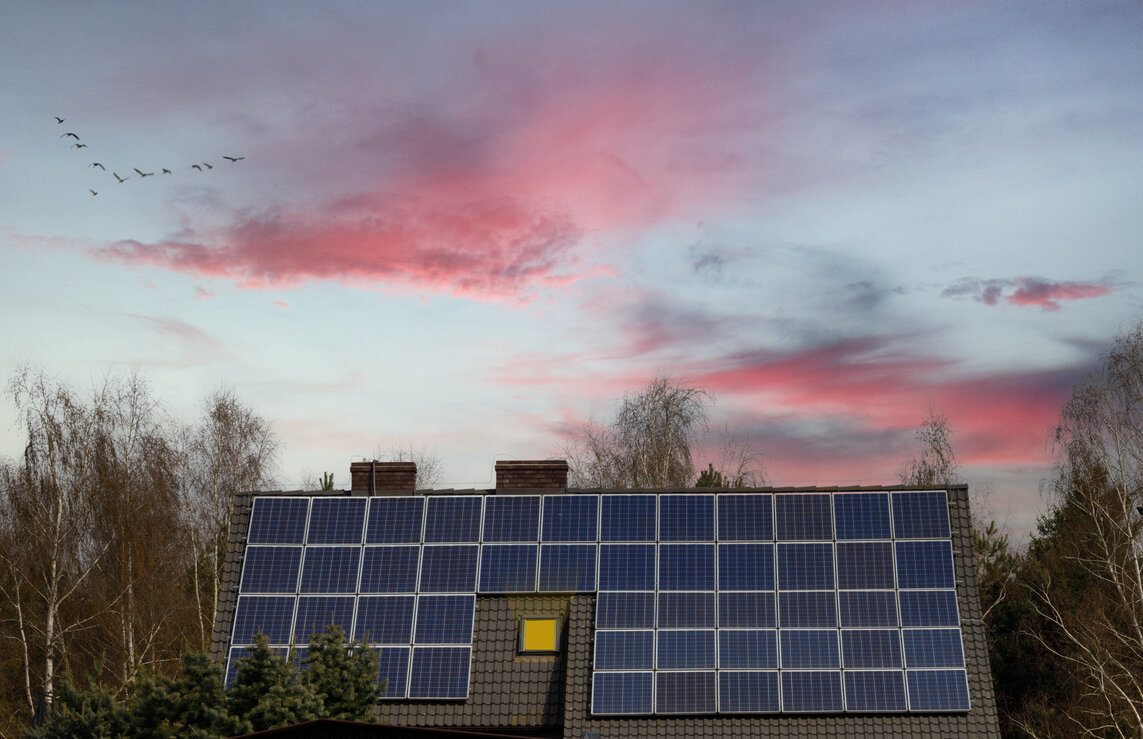