How Much Does It Cost to Install Solar Panels in Massachusetts

If you live in the Commonwealth, you may have heard of some of the many benefits and incentives that Massachusetts has for residents who install solar panels on their homes. Massachusetts has some of the highest electrical costs in the nation, behind only Hawaii and Rhode Island in the cost per kilowatt-hour that residents pay. This makes going solar attractive for families looking for ways to save money. The state has a program known as Solarize Mass to help get more solar panels onto homes throughout the state.

Costs for solar panels in Massachusetts range depending on where in the state you are installing them and the type and placement of the panels. The state average cost to install solar panels in Massachusetts is $16,020 to $19,860, with most homeowners paying around $17,940 for a 6 kW system using monocrystalline panels mounted on the roof. This project’s low cost is $5,340 to install a 2 kW system using thin film panels mounted on the roof. The high cost is $60,000 for a 10 kW system using monocrystalline panels with a battery backup installed on a ground-mounted array.

Cost of Solar Panels in Massachusetts by Type

Most residents in Massachusetts who install solar panels do so while remaining on the electrical grid. This is known as a grid-tied system and allows you to reduce the amount of electricity you purchase, while still having a backup electricity source in case of storms or snow covering your panels.

While it is uncommon and inadvisable in Massachusetts, you can also install your system off-grid. This means you disconnect from the grid completely, providing your own energy via solar panels.

In general, off-grid systems tend to be more expensive than grid-tied systems because of their size and the size needed in a state with less sun and more inclement weather like Massachusetts. Both have a range of costs, depending on the system size. Below are the average costs of both types based on the average size home in the state. 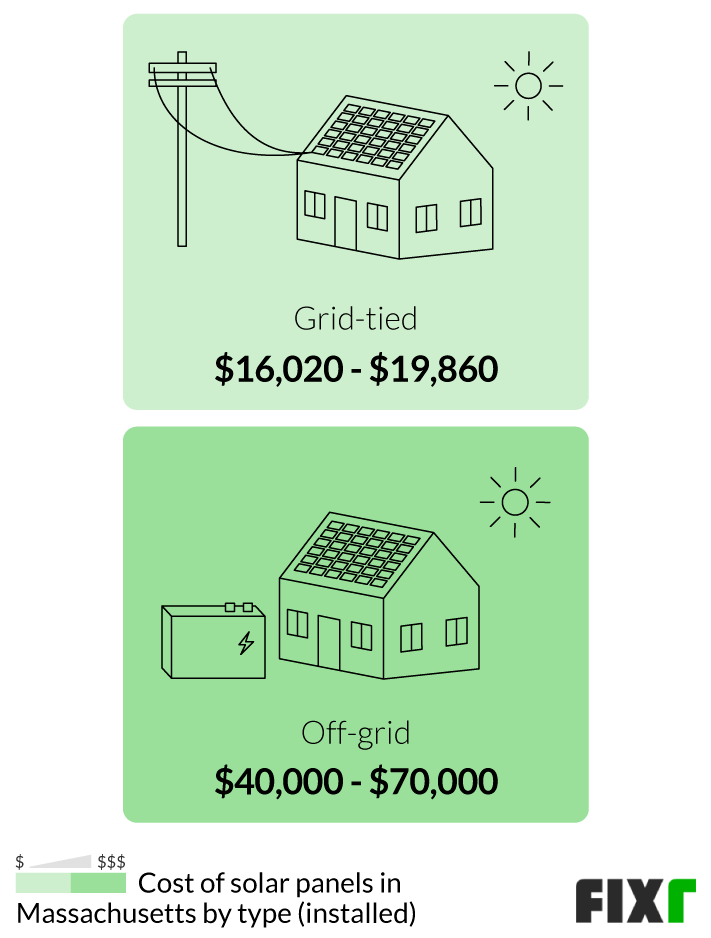 Solar panel systems are typically sold and installed by the watt, with most solar panels generating between 250 and 400 watts per panel. The average sized home in Massachusetts usually uses around 6,000 watts or 6 kilowatts to power the home due to the lower amounts of sun combined with higher electrical needs.

However, you can install smaller systems while remaining tied to the grid or larger systems for homes with higher-than-average electrical needs. The average cost per watt in Massachusetts is $2.67 to $3.31 installed. Below are the average costs for differently sized systems based on these costs and the number of panels you need to achieve these goals. 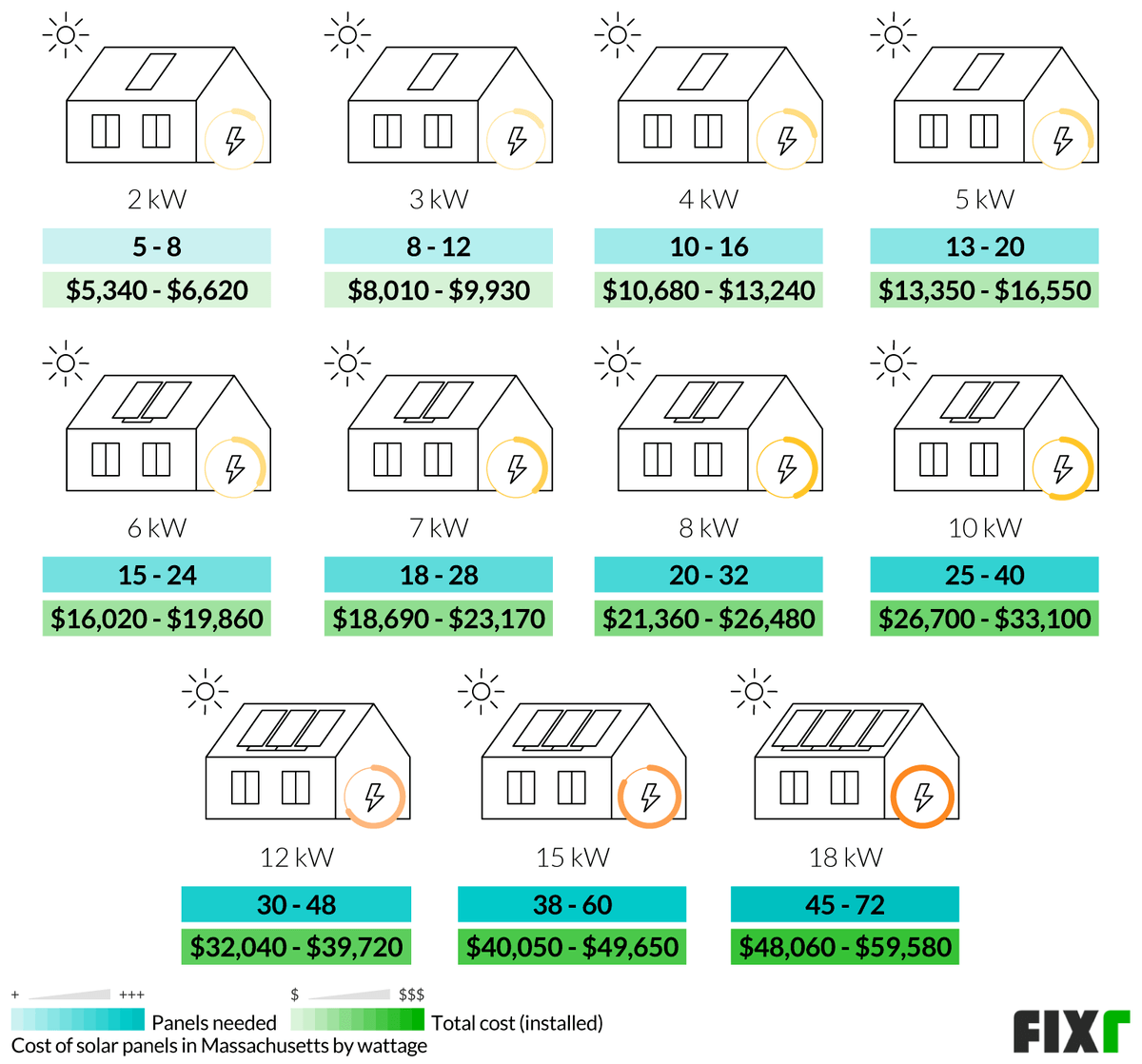 Average Cost of Solar Panels in Massachusetts per Square Foot

However, your actual energy usage combined with how much you want to lower your dependency on the grid dictates your ultimate project costs. Homes of any size can have a wide range of systems installed. Below are the average costs associated with installing solar energy on homes in Massachusetts of varying sizes. 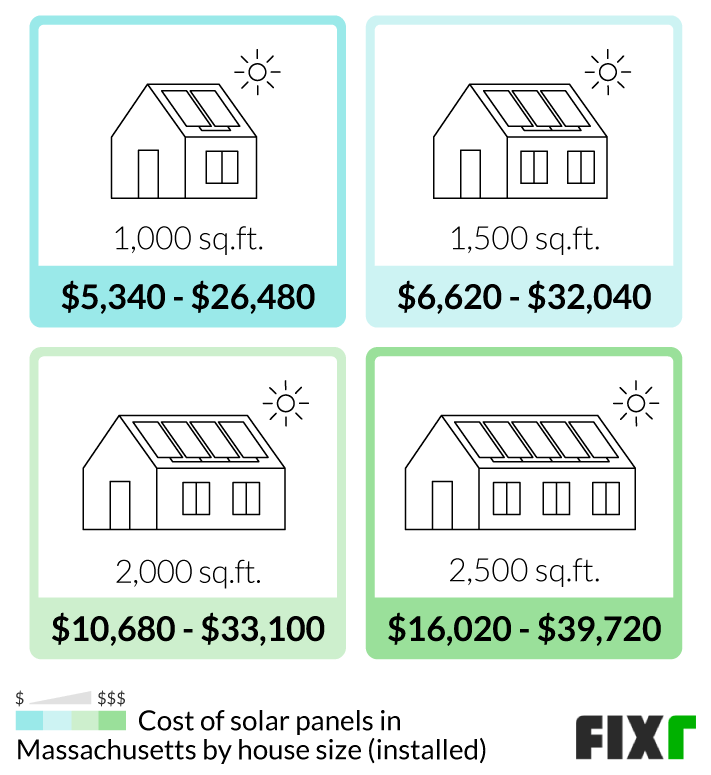 Cost of Solar Panels in Massachusetts by Cell Type

Solar panels can be made in several ways and are generally broken into three categories. The first is polycrystalline, which is made of pieces of silicon crystals that are pieced together. These panels are less expensive but not as efficient as other types. They are bright blue and slightly higher in profile than monocrystalline panels, so they are more visible from the ground. This makes them not as common as monocrystalline panels.

Monocrystalline panels are the third and most efficient type, as well as the most popular. They are also the most expensive. They have a sleek black appearance and a slightly lower profile than polycrystalline panels. These panels produce the most energy if your home has direct exposure to southern sunlight. Below are the average costs to install a 6 kW system in Massachusetts based on the different panels. 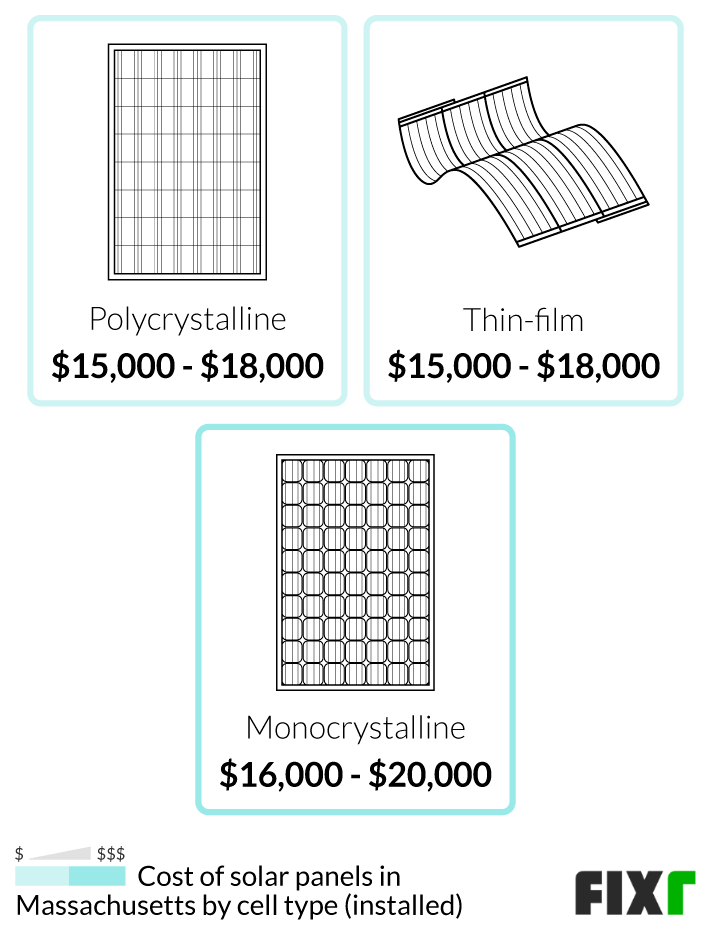 The cost of labor to install your solar panels in Massachusetts is roughly 20% of your total project costs. This includes the installation, racking, and balancing of the system. For a 6 kW system, this works out to around $3,204 and $3,972 in labor costs, or between $0.53 and $0.66 per watt.

Several factors can impact the cost of labor and installation, including the system size and type, panel location, and the average cost of labor in your area. If you purchase solar panels in Cambridge, your labor costs are likely to be higher than if you install them in Northampton. Your labor costs can also vary depending on whether you install your panels on your roof or the ground. Roof mounting tends to be easier and less expensive. Below are the average labor costs for differently sized systems in the state. 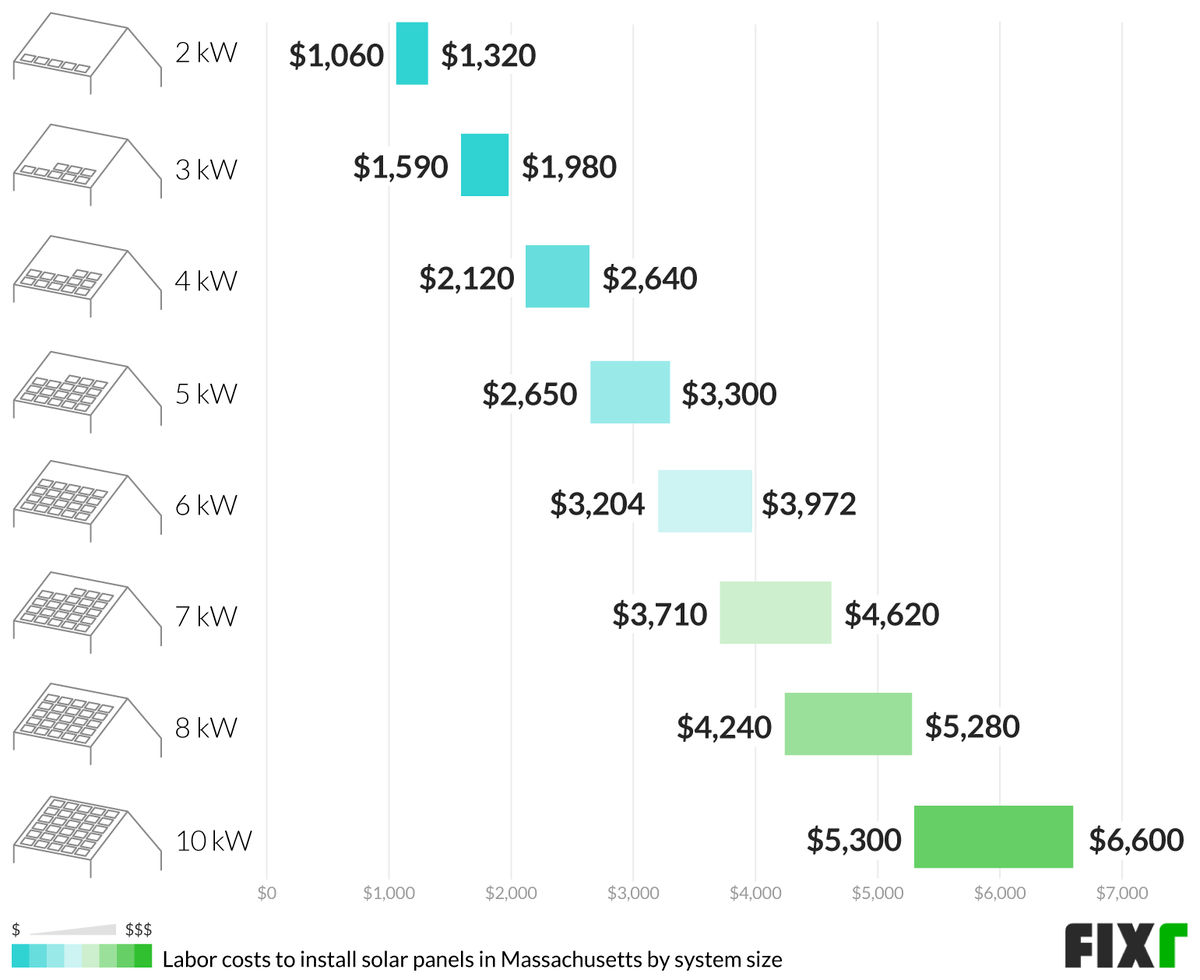 Get free estimates from trusted solar panel installation companies near me

Which Direction Should Solar Panels Face in Massachusetts?

In general, the best direction for your panels to face in Massachusetts is to the south. This maximizes the amount of light your panels receive throughout the day and gives you the best energy returns.

However, direction is only one thing to consider when mounting your panels. Not all homes in Massachusetts have a roof that faces south, in which case you may want to consider southwest or southeast whenever possible. You may need to consider alternative installations if your home is surrounded by tall trees or buildings that could block the sun, including changing the direction or mounting your panels on an array nearby to capture more light.

Cost to Install Solar Panels in Massachusetts by Location

Most people who install solar panels in Massachusetts place them on the roof of their home. However, some homes may not face the correct direction for the panels to be installed there. Others may have a roof that is in the shade for too much of the day, while some installations may be too large to be installed on the roof, such as systems designed for going off-grid.

In any of these instances, you can also consider installing your solar panels on the ground. This is done by installing the panels on a ground-mounted racking system or pole mount. Ground-mounted arrays are more costly than roof-mounted installations. They take longer to install and you need to run the cables from the array underground to your home, increasing labor costs. 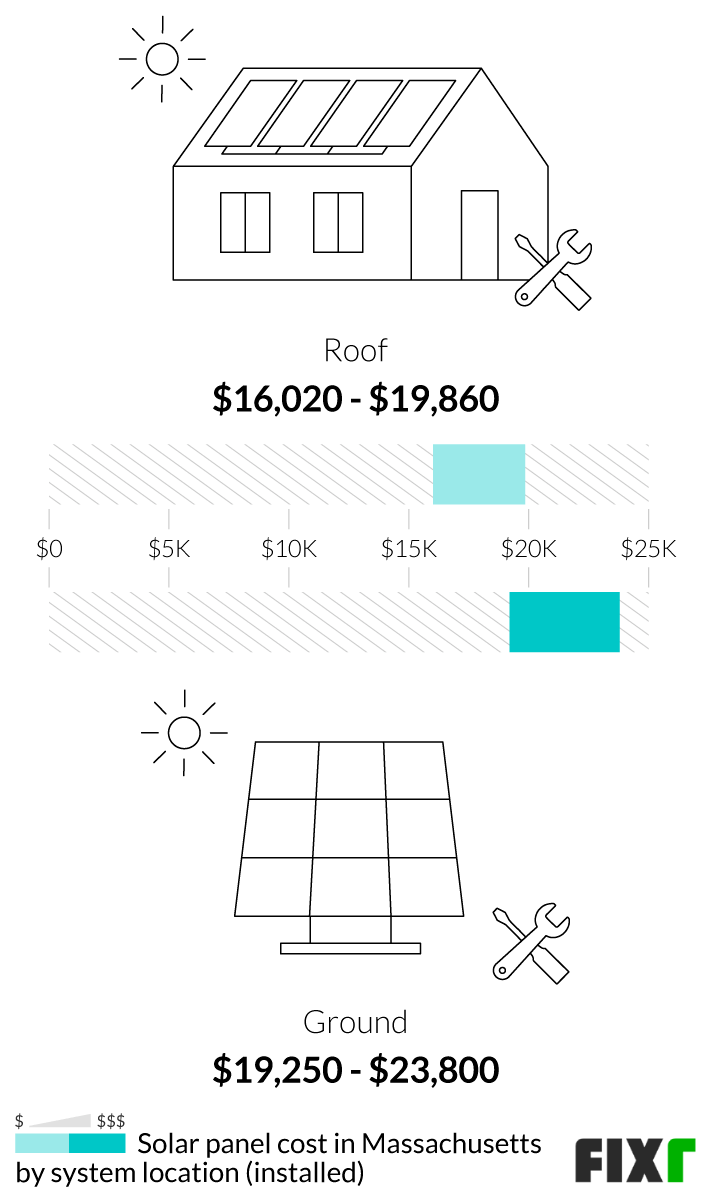 Massachusetts has many benefits and incentives for residents who want to install solar panels. These include a sales tax exemption, property tax increase exemption, solar power buyback programs, and a tax credit of up to $1,000 that you can claim when you file your taxes at the end of the year. You are also eligible to file for the Federal tax credit, which is 30% of your installation cost in 2022. For a 6 kW system, this can translate into a tax credit of $4,806 to $5,958 plus the $1,000 you get back from the state.

In Massachusetts, the inverters make up roughly 10% of your total costs for the system. There are several kinds, which have a range of costs.

The most common type and the lowest cost is the string inverter. In this system, several panels are linked together in a string, with multiple strings connecting to one inverter. The downside of this system is that if one panel goes down, the entire string goes down, lowering total output.

Microinverters cost more than the string inverter but solve this problem. Microinverters do not connect up panels; you install one inverter per panel. They are less costly per piece, but you need more of them so the system does cost more.

If your system uses batteries, you need a battery inverter for each battery. Battery inverters convert the energy from the system into something your batteries can store for later. Below are the average costs per inverter type. 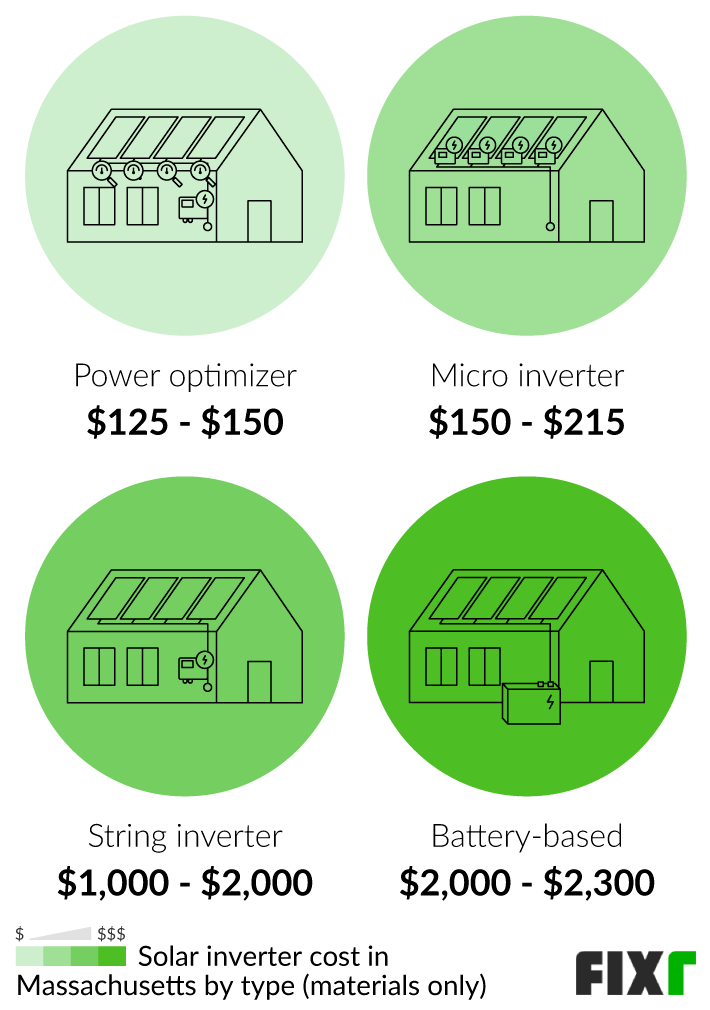 Cost to Run and Maintain Solar Panels in Massachusetts

To ensure your solar panels are reaching their maximum lifespan in Massachusetts and continuing to provide you with clean energy year after year, you have some maintenance costs. Maintenance costs in Massachusetts include monitoring and inspections, small repairs for things like wires, cleaning the system, and installing snow guards. Snow guards are particularly useful in Massachusetts because they can help keep your system running even in a Nor’Easter.

The average cost of inspection and cleaning in Massachusetts is between $200 and $500 per visit, or roughly $400 and $1,000 per year. This helps ensure your system is working properly and includes minor repairs, such as wire replacement.

The installation of snow guards on your panels costs between $1.75 and $3 a linear foot. Snow guards help keep your family and property safe from heavy snow sliding off the panels after a big storm. It is recommended to install them with your panels, but they can be added at any time. 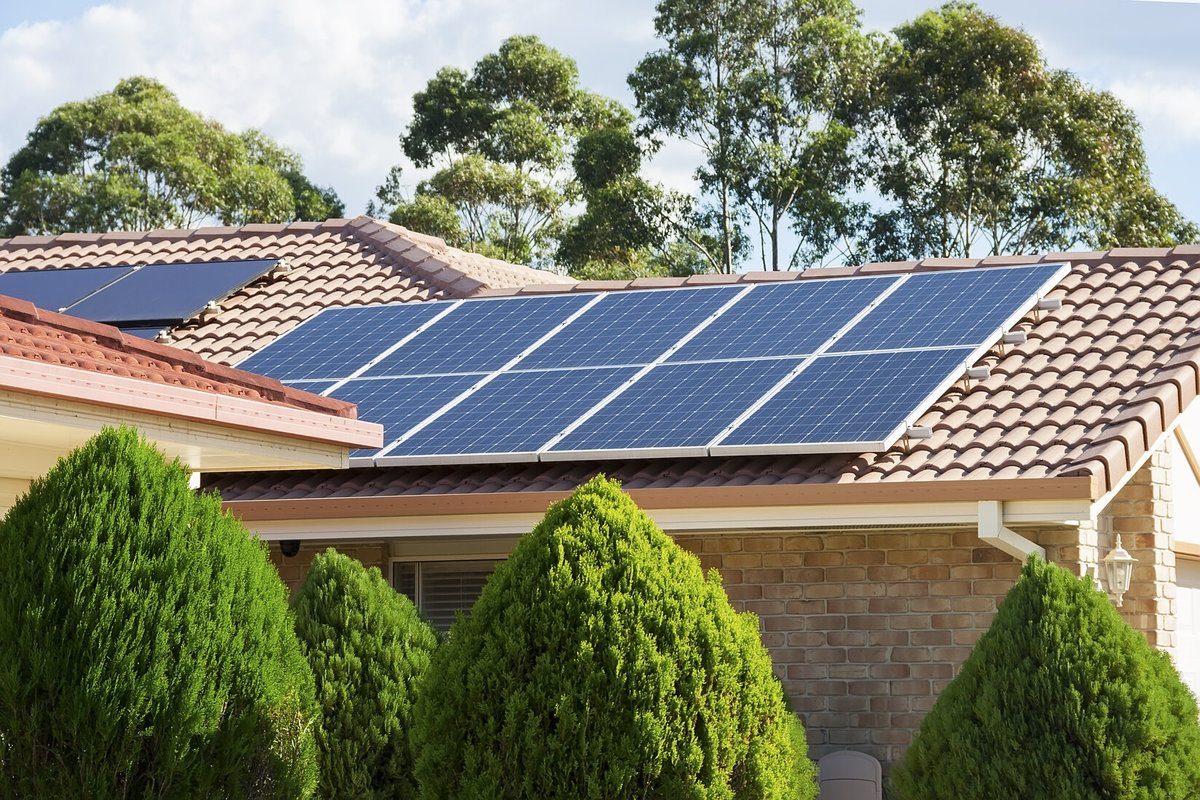 If you have an older roof that needs to be replaced before installing solar panels or you do not love how solar panels look, you may want to consider a Tesla solar roof. Tesla roofs have been available in Massachusetts for the last few years and are recommended for homes that may need a new roof before solar panel installation.

A solar roof is a mixture of photovoltaic roofing tiles and plain roofing tiles. They install seamlessly over the entire roof, so they have a more subtle appearance than solar panels on a standard roof. Tesla solar roofs can be used with their Powerwall batteries as well. This can allow you to lower your dependency on the grid as well. These roofs have a total average system cost of between $40,000 and $70,000 in Massachusetts fully installed.

In addition to installing solar panels to generate electricity for your home, you can also install a solar water heater. Solar water heaters use the sun’s energy to heat the water in your home. They cost between $8,000 and $10,000.

Costs vary for solar installation in Massachusetts, depending on the system size and location. The average system cost in Massachusetts is $16,020 to $19,860 for a 6 kW system.

Yes, Massachusetts has some of the highest electricity costs in the country and the state also offers many incentives and credits for the installation.

This depends on your system size and energy consumption, but it isusually between 5 and 7 years.

Yes, there is net metering in Massachusetts, and you receive a credit on your electric bill for any overages you supply.

Yes, this is known as net metering, and overages your system generates show up as a credit on your electric bill.

How much does it cost to install solar panels in Massachusetts in my city?

Cost to install solar panels in Massachusetts varies greatly by region (and even by zip code). To get free estimates from local contractors, please indicate yours. 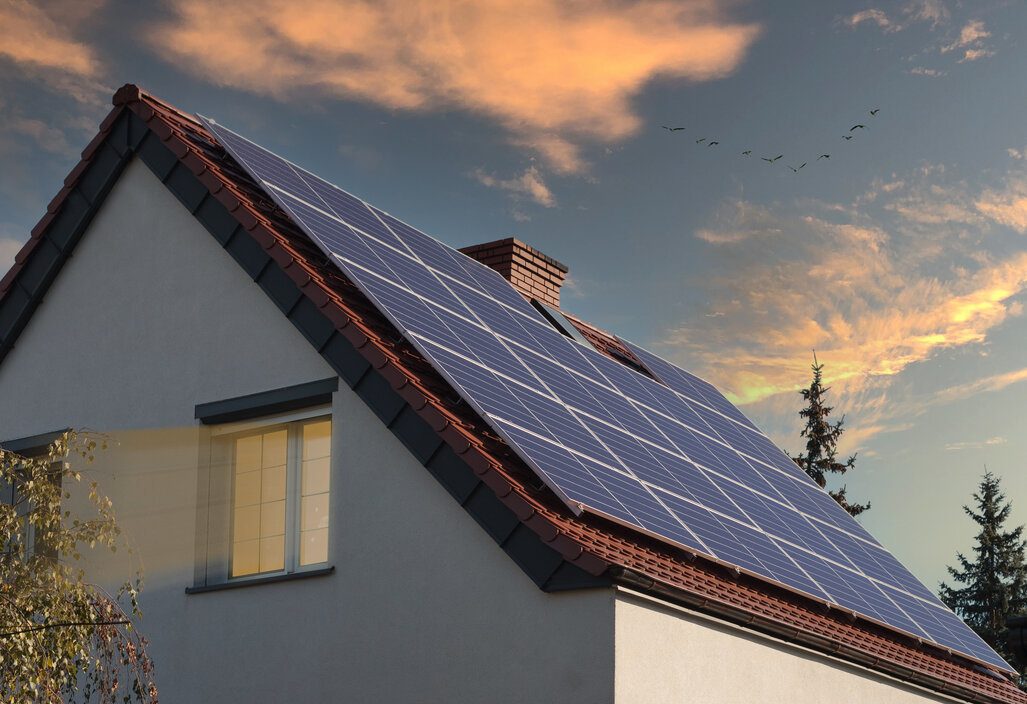