How Much Does It Cost to Install Solar Panels in NY?

Living in the Empire State can mean a higher cost of living for many people, including electricity rates above the national average. The state also sees more sunny days than the national average, with more than 230 sunny days a year, depending on where you live. These factors, combined with the state’s incentives to help residents take advantage of solar energy, put New York state residents in a good position to invest in solar power.

Cost of Solar Panels in NY

Average Cost of Solar Panels in NY by Type

Most solar panel installations in New York are grid-tied. This means you remain connected to the main power grid. You can still draw from the grid if your panels do not produce enough energy, so you can still use grid power during inclement weather or at night. The other option for panel installations is off-grid. This means you disconnect from the power grid entirely.

Off-grid installations must be larger and include battery backup for when the sun is not out. You usually need a generator or wind power as a backup system. This makes off-grid systems much more expensive than grid-tied systems. Going off-grid is legal in New York but can be difficult. You need to go through a lengthy process of inspections to ensure you meet strict building codes before you can disconnect from the grid. Below are the average costs of installing both systems in New York. 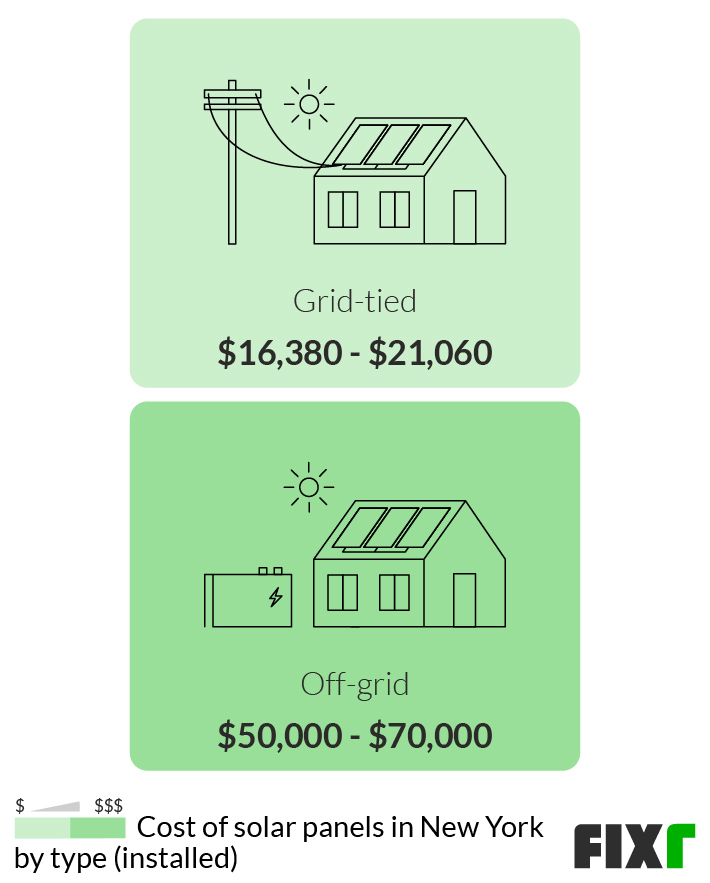 Many solar panel systems are sold and installed by the watt. In New York, the average cost per watt ranges from $2.73 to $3.51, with most households needing 6 kW or 6,000 watts to meet their needs and each panel having between 200 and 400 watts. However, it is entirely possible to need a smaller or larger system based on your home size and energy usage. You can also install smaller systems to offset your energy needs, so there can be a range of systems. Below are the average costs for differently sized systems in NY and the number of panels you need for each installation. 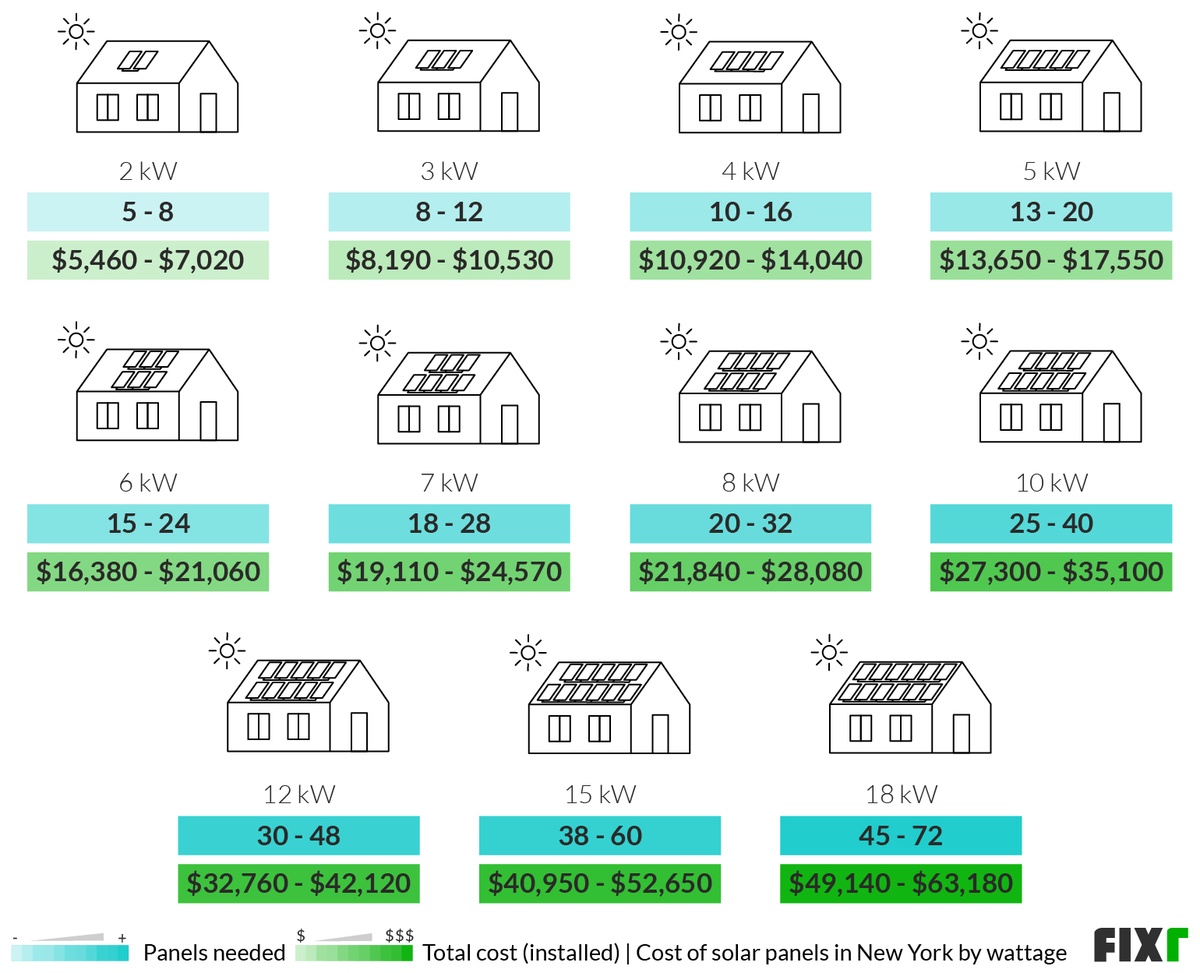 Cost of Solar Panels in NY per Square Foot

While your home size does not directly influence your system size, there is some correlation. Solar panels in NY state cost $5.46 to $28.08 per sq.ft. Typically, larger homes have more appliances, larger electric systems, more occupants, and higher energy needs than smaller homes. However, a small home could have higher-than-average energy needs, and a large home could have lower-than-average energy needs. This leads to a range of costs based on your home size. Your municipality, how much sun your home gets, and where the array is mounted 1 can also impact your final costs. Homes in New York range from small apartments to large mansions, meaning systems of all sizes can be found throughout the state. Below are the average costs for homes of different sizes in New York state. 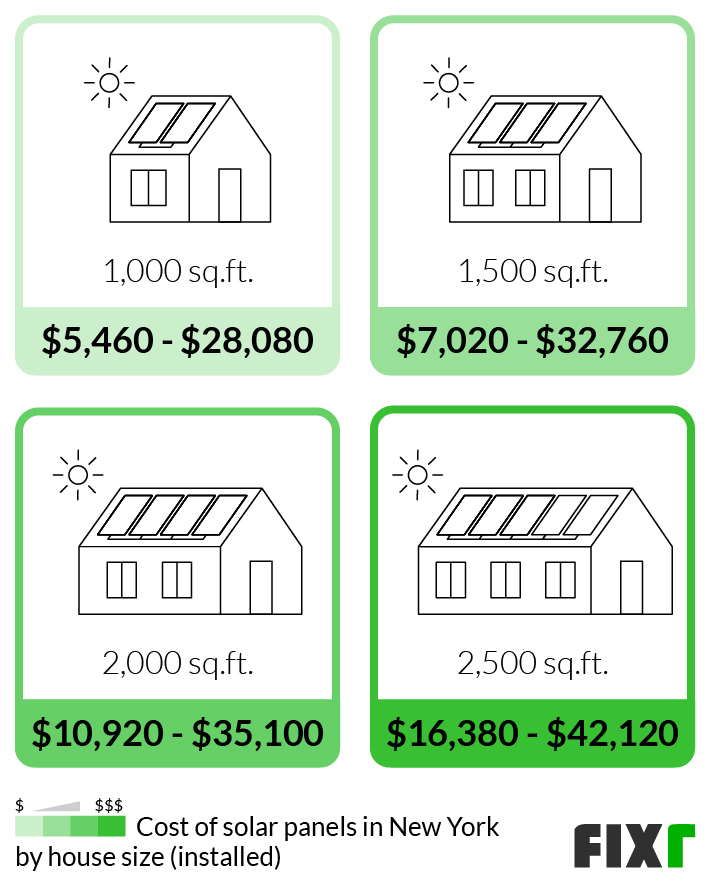 Cost to Install Solar Panels in NY by Cell Type

You will find three types of solar panels in New York. The first is monocrystalline, which is made up of whole silicon crystals. This is the most common, efficient, and expensive solar panel. These panels have a sleek black surface, making them more attractive. The next most common is polycrystalline, which uses fragments of silicon crystals. It is less costly than monocrystalline but less efficient. These panels have a brighter blue surface color, making them more obvious.

There is also a panel known as thin-film. This is the least common solar panel type for residential use. It does best in low light rather than direct light but is generally less efficient than monocrystalline panels, which work best in direct light. Thin-film panels are lower in profile than the others. Each panel has a cost range. Below are the average costs to install the different panels in New York, based on a 6 kW system. 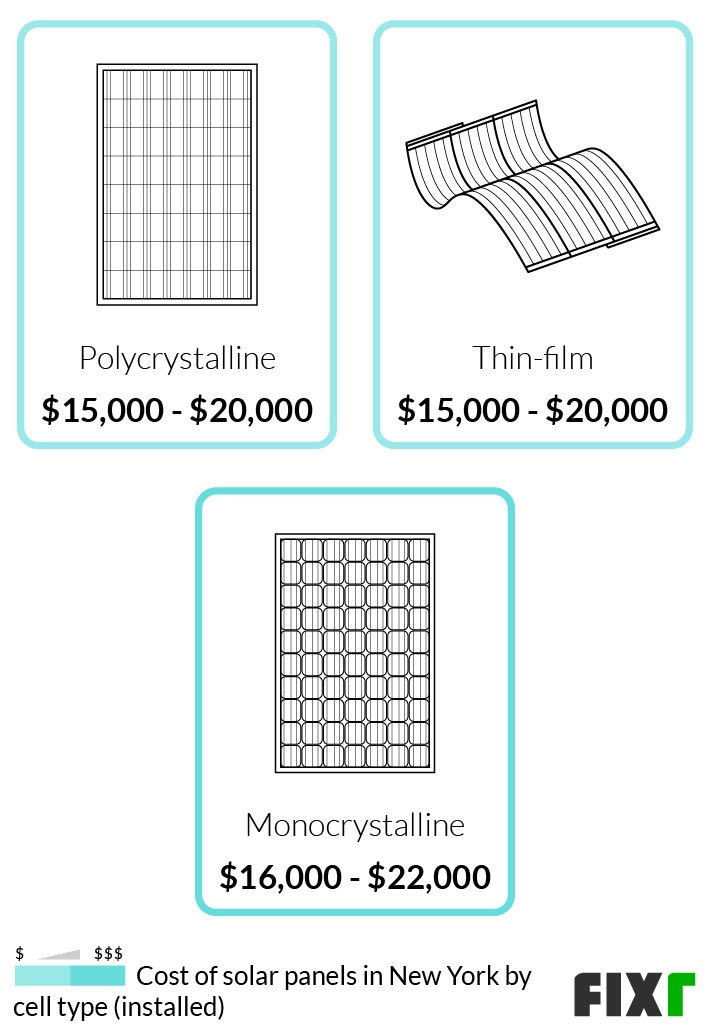 While the panel type and system size drive some of the system costs, the cost to install the panels varies. The average labor cost in New York is $1.27 to $1.70 per watt. This makes the labor costs for a 6 kW system $7,620 to $10,200. Costs for labor can be higher in New York City and lower in less-populated areas. Other factors impacting your labor cost include whether the panels are mounted on the roof or ground, with ground installations having higher costs, and the inverter type. Below are the average labor costs to install systems of varying sizes in New York state. 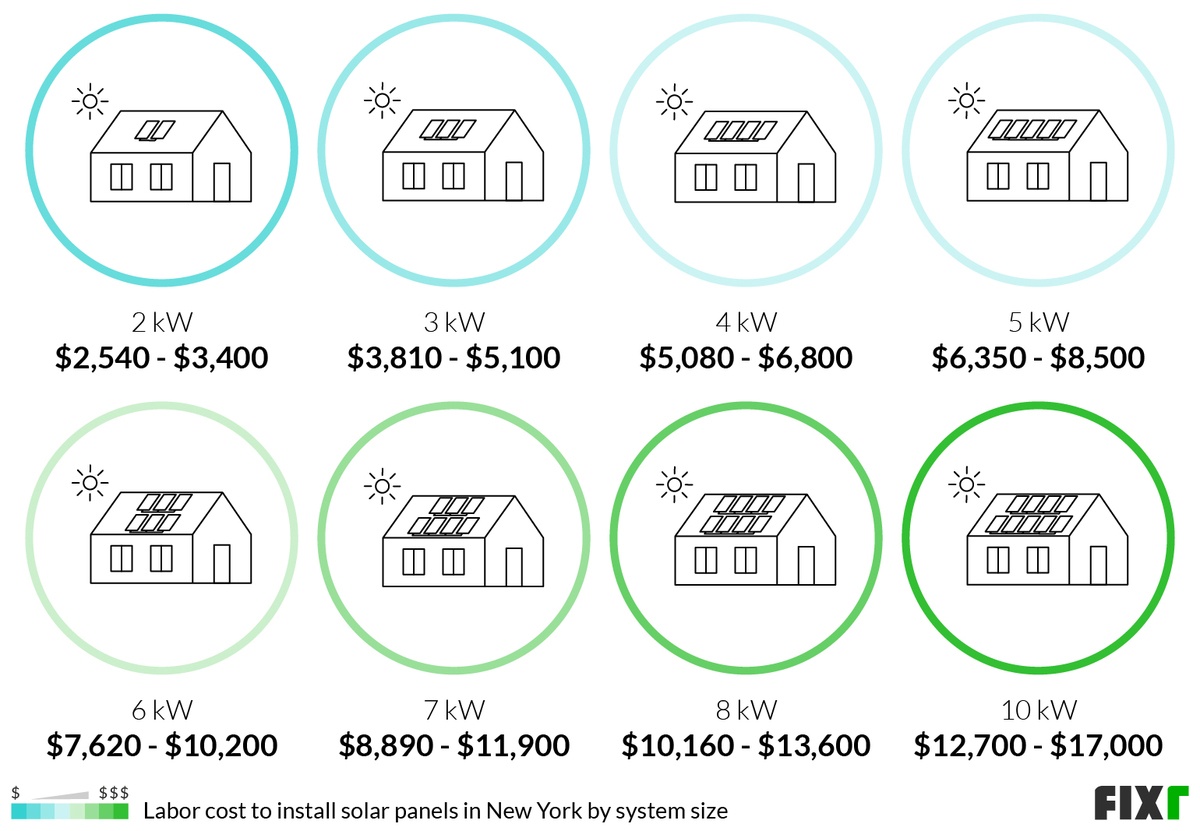 Which Direction Should Solar Panels Face in New York?

Your solar panels should be installed facing south. This means they get the best sun exposure and produce the most energy. However, you can install your panels fully to the east or west and still capture up to 75% of the energy if your roof does not face perfectly south. The only direction you do not want your panels facing on your New York home is north because this generates less than half the energy south-facing panels produce.

Cost of Installing Solar Panels in New York by Location

You have two placement options when you install solar panels on your New York home. The first is the most common - your roof. Roof-mounted systems are also the least expensive because the connections to your home’s electrical system can be made there.

However, if you have a large system or your roof does not face enough to the south for good exposure, you can mount your system on the ground. Ground-mounted arrays are usually larger and more costly than roof-mounted arrays. They also take more labor to run the cables from the system underground to your home, so they cost more in materials and installation, making them more expensive. Below are the average costs to install in both locations in New York using a 6 kW system. 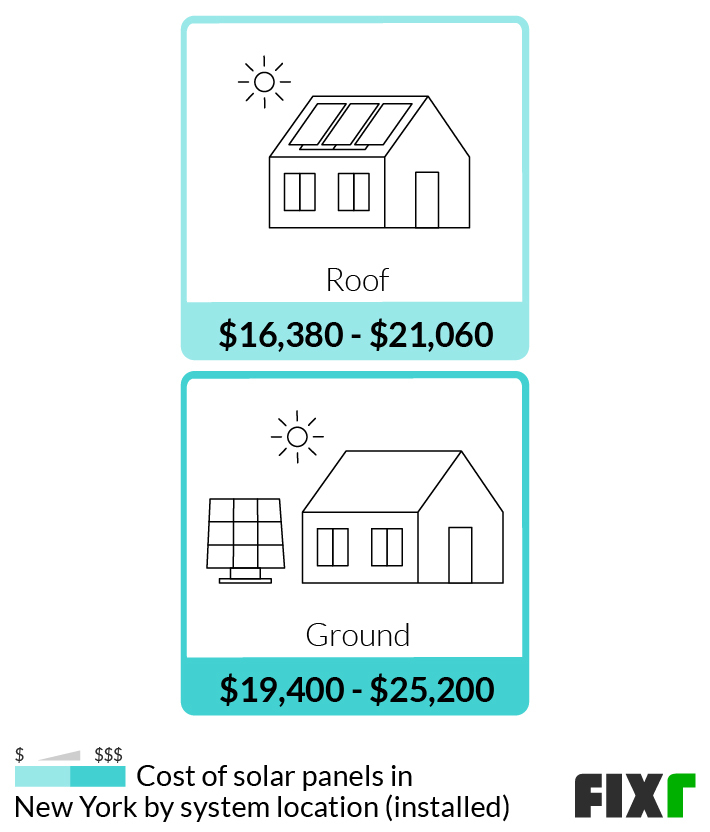 New York has many incentives for homeowners and apartment building owners to invest in solar energy. In addition to the federal tax credit, which has been expanded under the Inflation Reduction Act to 30% and is available through 2032, you also have a state tax credit to take advantage of. The state credit is 25% of total installation costs up to $5,000 and can be combined with the federal tax credit.

New York also offers net metering equal to the full rate of your typical electricity costs and a program called the NY-Sun Megawatt Block program, which offers rebates of $1,000 to $3,000 based on your system’s size.

You also need a minimum of one solar inverter for your system to run. They convert the energy your panels produce into energy your home can use. There are two types - string inverters, which are slightly more common, and microinverters. With string inverters, groups of panels are connected in strings. They are connected to a single inverter, which is generally installed someplace accessible like your basement. The drawback is that if one panel on a string stops working, it can reduce the production of the entire string. Microinverters are designed to solve this issue. Each inverter is attached directly to a solar panel. So, while each inverter is less costly, you need more of them, raising costs.

You can opt for power optimizers with your string inverters. These attach directly to the panel like microinverters, and you need one per panel. A power optimizer prevents the other panels from dropping production if one panel drops, eliminating the most common problems with string inverters. If you have batteries for your solar system, you need at least one battery inverter. These are needed for off-grid installations and help your batteries store the energy you need for later. Below are the average costs per inverter based on the different types. 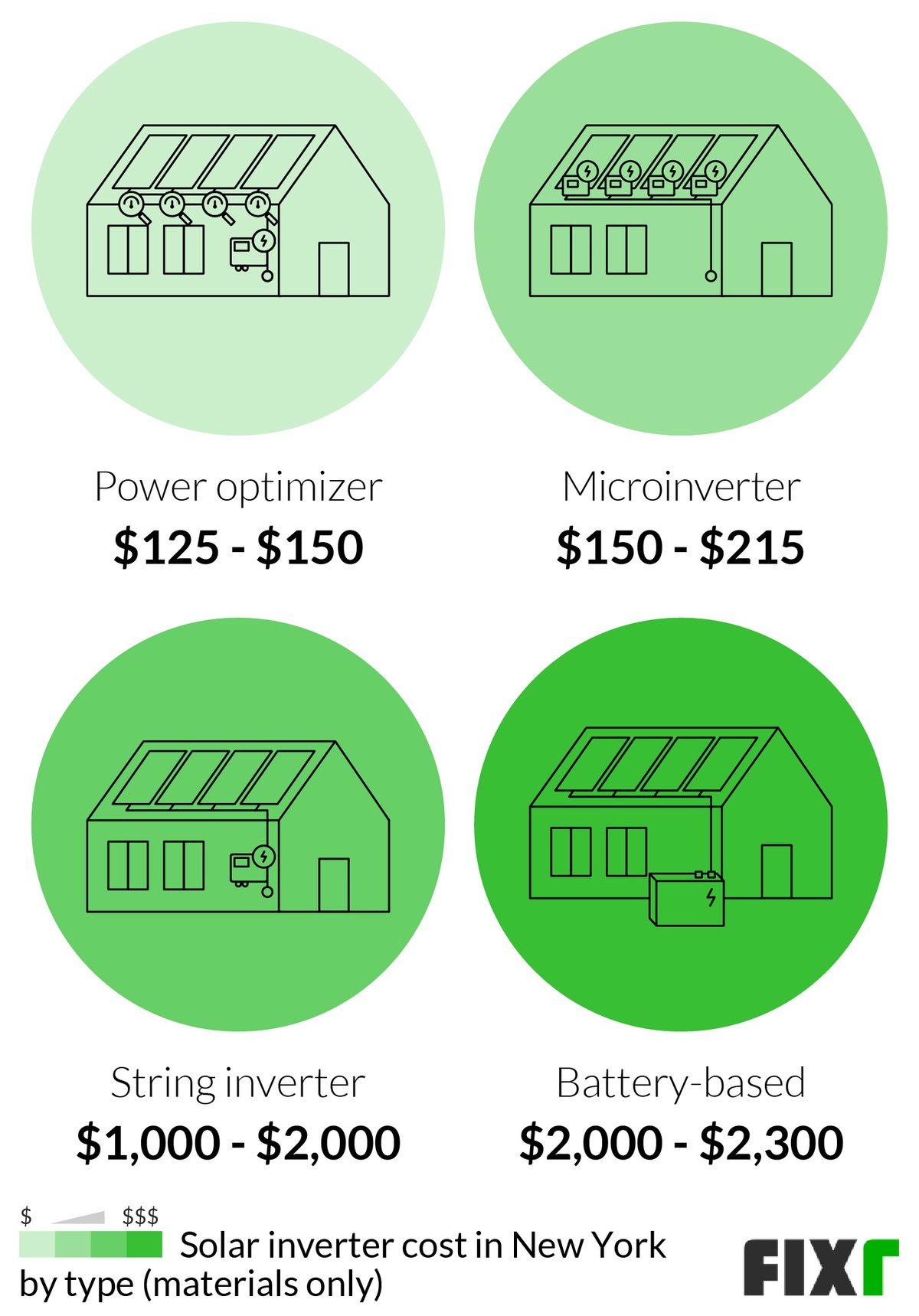 Cost to Run and Maintain Solar Panels in New York

You also must maintain your solar panels. Depending on where you live, you may need to clean the panels more regularly than in other areas. For example, panels installed in NYC may need to be cleaned more often than in other areas due to pollution. During regular cleaning, your panels must also be inspected for damage and basic repairs can be made at this time. The cost to have your panels cleaned in New York is $150 to $330 per visit. Most homes need about two visits a year, but you may need more cleanings if you live in areas with higher pollution levels.

If you dislike the look of solar panels covering your roof or need a roof replacement when you want to go solar, you may want to consider investing in a Tesla Solar roof. Tesla Solar roofs use a combination of solar and inactive roofing tiles that cover your entire roof. It has a more subtle appearance than solar panels, improving your home’s curb appeal. You can also invest in one of Tesla’s Powerwall batteries to further reduce your grid dependency. The cost of a Tesla Solar roof varies depending on your home size, roof square footage, and energy needs. Costs in New York range from $35,000 to more than $70,000 for the average home.

Another way to save on energy costs with solar energy in New York is to install a solar water heater. These systems use solar energy to heat the water that circulates through your home and are estimated to reduce your energy bills by 20%. The same solar tax credits also apply in New York. They cost roughly $2,000 to $4,000 installed in New York before credits.

Yes, between the large tax credits, high cost of electricity, and the number of sunny days, it is very worth it to install solar panels in New York state.

They are not free, but rebates and tax credits can significantly lower the cost of solar in NY.

Yes, New York sees more sunny days than the national average. The state also offers significant credits and rebates that can lower the cost, allowing you to see results faster.

Yes, there is a permitting process to install solar panels in NYC. Speak to your local municipality to find out more.

New York has a tax abatement policy for solar panels, meaning the installation of solar panels does not increase your property taxes.

Definitions in laymen's terms, cost considerations, pictures and things you need to know.
See full cheat sheet.
1 Mounted: A support on which something is attached or hung

How much does it cost to install solar panels in New York in my city?

Cost to install solar panels in New York varies greatly by region (and even by zip code). To get free estimates from local contractors, please indicate yours. 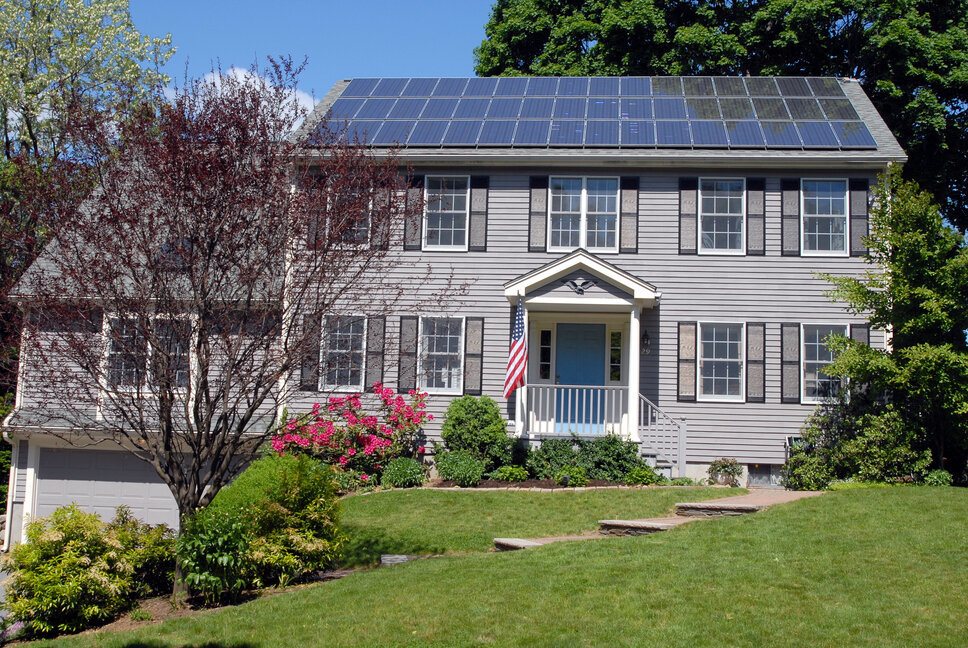