How Much Does Termite Treatment Cost in Oklahoma?

Average range: $250 - $1,100
Low
$200
Average Cost
$450
High
$5,900
(Liquid treatment around the perimeter of a 2,500 sq.ft. home)
Get free estimates from animal/pest control specialists near you
Here's what happens next
Step 1
Answer a few questions
Tell us what you are looking for.
Step 2
Find out how much your project will cost
The contractors will offer competitive free quotes for your job.
Step 3
Compare the quotes and hire
Compare the estimates and hire the contractor who best fits your needs.

Termites are present throughout Oklahoma. Places like Oklahoma City are home to Eastern subterranean termites, some of the most destructive species in the nation. Oklahoma City homeowners must also guard against drywood termites, which are very common and were not in the state until they migrated into it. When left to their own devices or allowed to flourish, termites can destroy homes and cause homeowners thousands of dollars’ worth of repairs, whether drywood or subterranean species. Even though Oklahoma City residents pay less for termite treatments than the nationwide average, costs can still rise to thousands of dollars.

Cost of Termite Treatment in Oklahoma

Tent vs No Tent Termite Treatment Cost in OKC

Termite treatment options fall into two categories. Exterminators generally use the option that works best for the species of termite they need to eradicate. Treatments fall into the categories of tent or tentless. For subterranean termites, exterminators use tentless treatments that include applications of liquid treatments and bait traps. For drywood termites that may reside aboveground and inside the home, exterminators use a tent treatment where the entire home is covered and sealed in a tent with heat or chemicals flooded into the space to kill the termites.

Nationwide, homeowners pay between $1 and $3 per sq.ft. to have their house tented. In Oklahoma City, costs are less than the national average and sit between $0.90 and $2.65 per sq.ft. For tentless treatments that exterminators measure by the linear foot, treatments range between $3 and $16 nationwide. However, costs are lower in Oklahoma City. Homeowners usually pay between $2.65 and $14 per linear foot. A linear foot is a measurement of width and length. 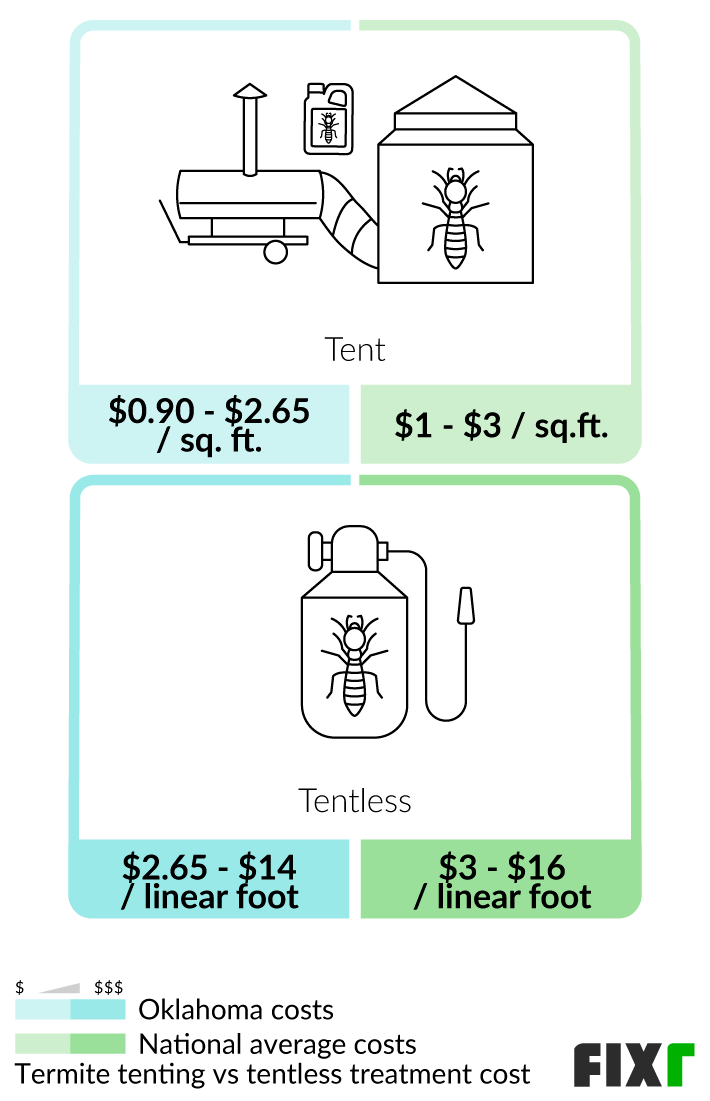 Get free estimates from termite treatment professionals in Oklahoma

Cost of Termite Treatment in Oklahoma per Square Foot

Oklahoma City homeowners get a break on the cost of their tent termite treatments, with costs starting at $900 for a 1,000 sq.ft. house on the low end. Costs increase to $7,950 on the high end for a 3,000 sq.ft. house. Costs are based on the expected range of $0.90 to $2.65 per sq.ft. Figures are 12% less for Oklahomans than the national average for termite treatments. The chart below explains the costs homeowners should expect to tent their house based on size. 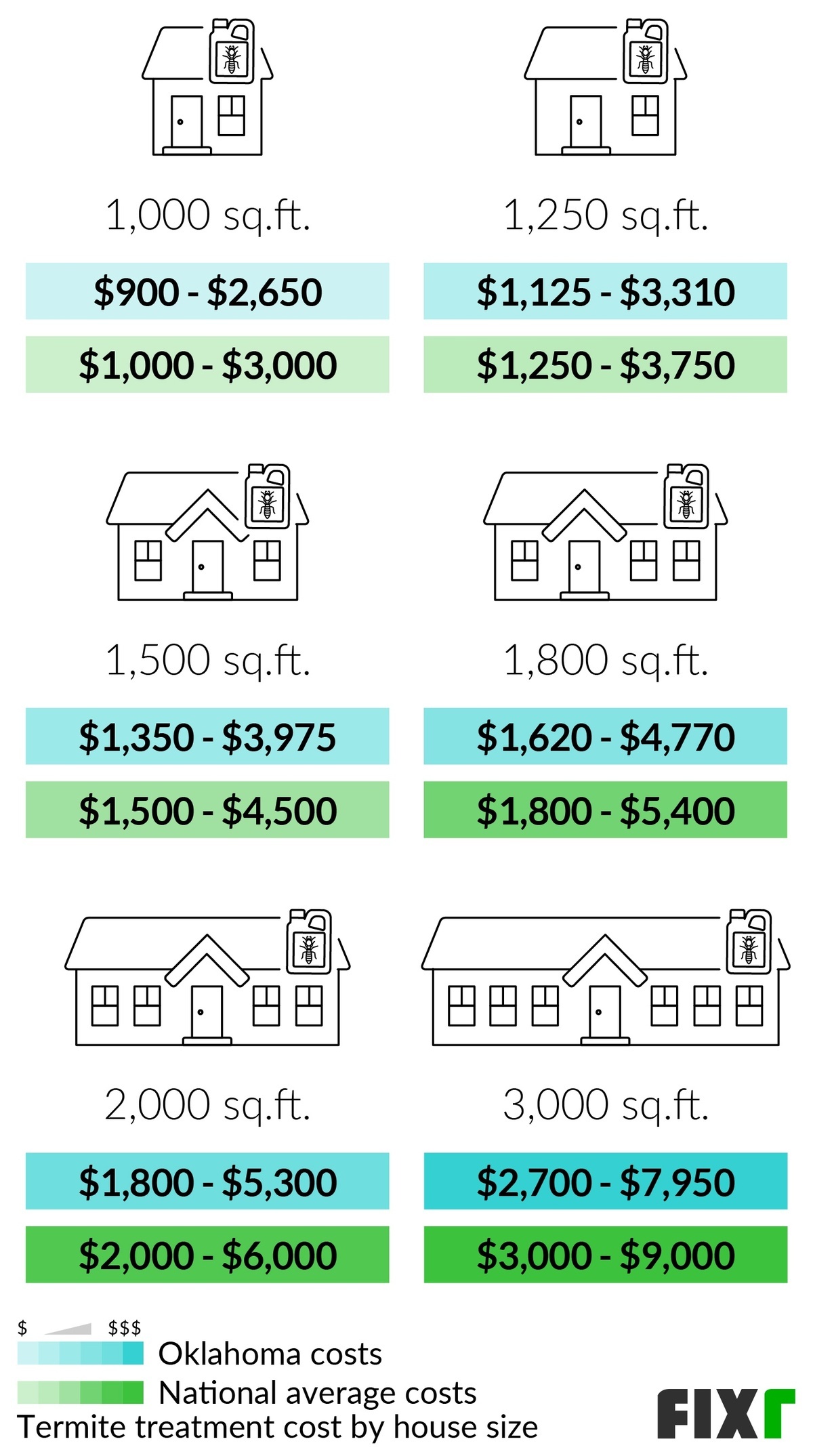 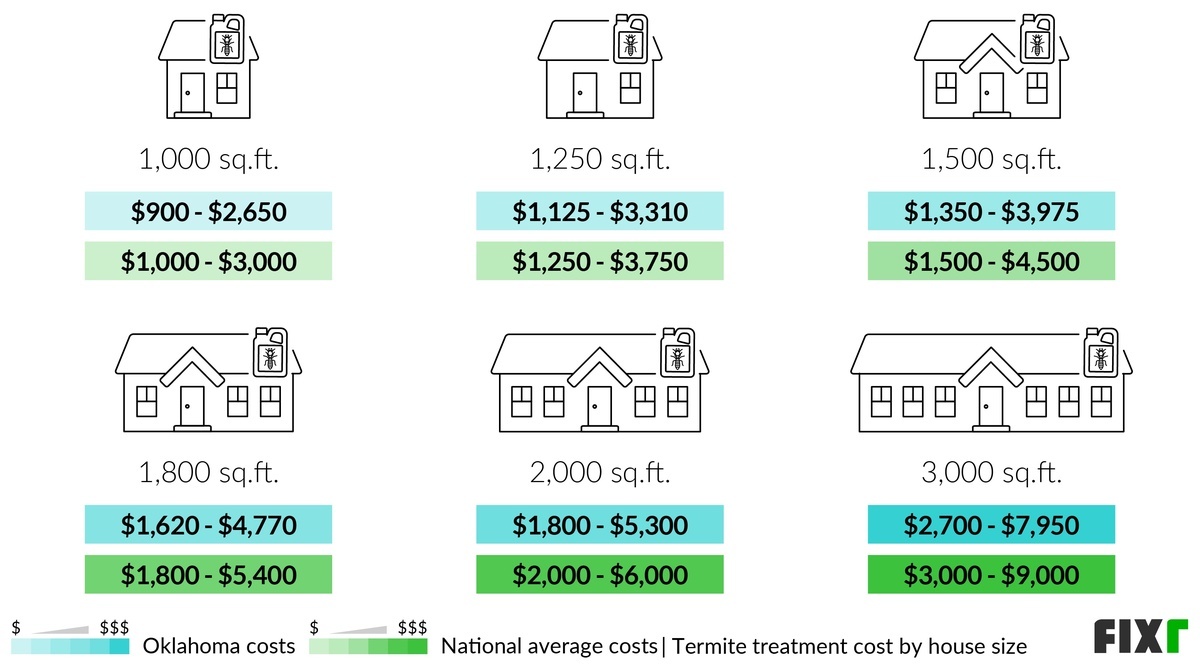 The cost per linear foot for termite treatments in Oklahoma is $2.65 to $14, which is lower than the national average because of Oklahoma’s reduced cost of living. Homeowners can expect to pay as little as $265 for treatments of 100 linear feet to as much as $5,600 for treatments of 400 linear feet. Termite treatments that use linear feet are tentless and usually feature bait traps or liquid treatments drilled into the ground near subterranean termite colonies. Figuring out how many linear feet your exterminator might require to treat your termites is not always obvious. The best answer comes from the exterminator during the initial planning and inspection. 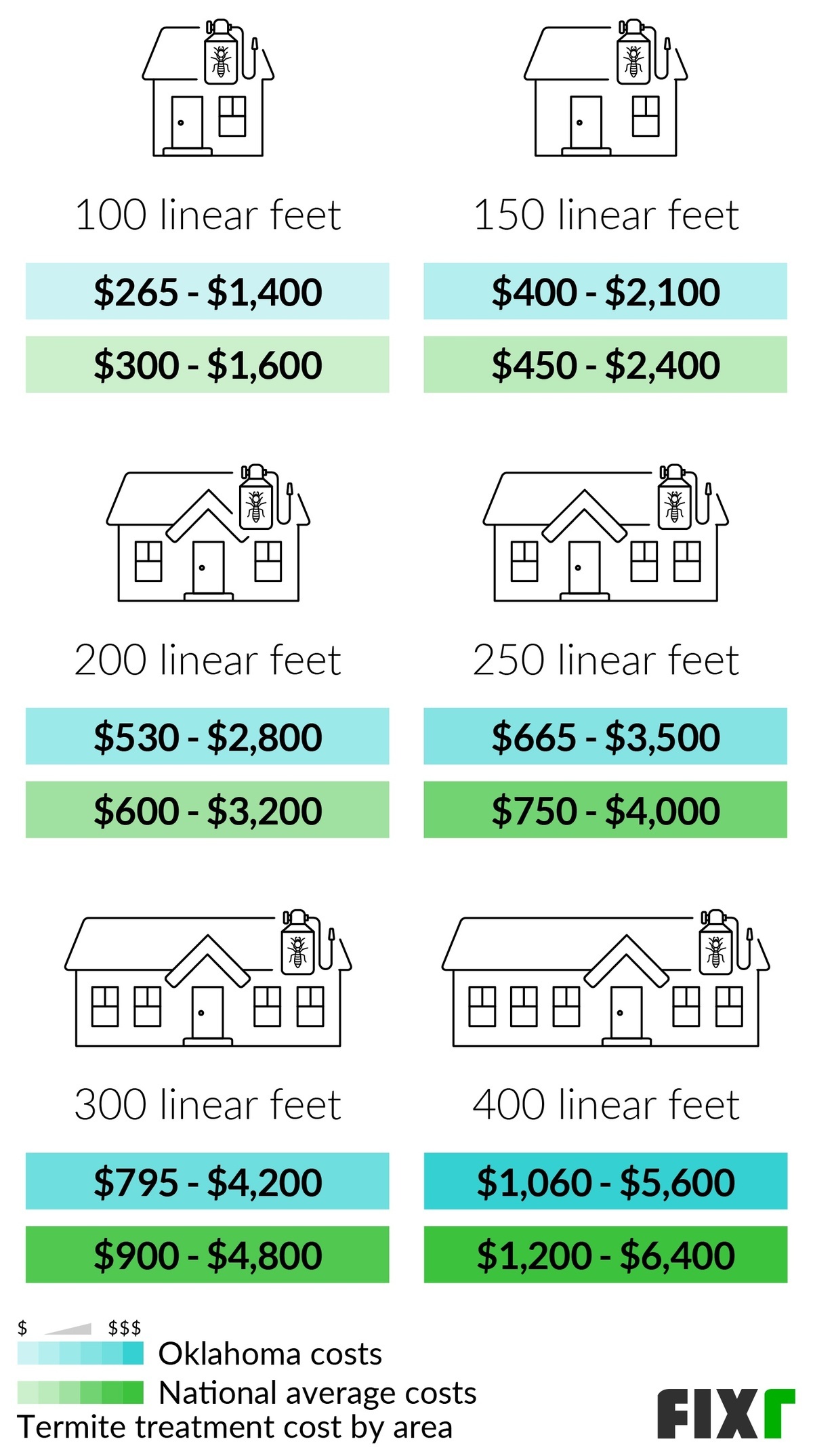 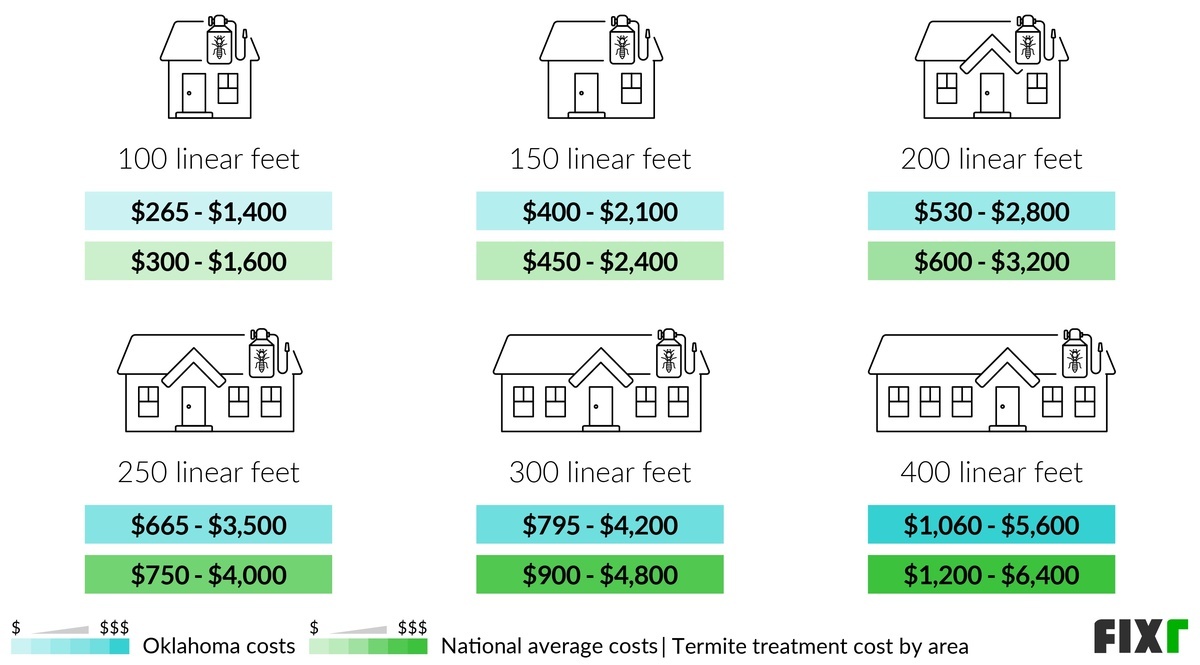 Termite treatment companies may offer a treatment plan with quarterly or monthly visits ranging from $215 to $795 per year. Meanwhile, a yearly contract with one visit costs between $155 and $355. A yearly contract is helpful to consider after a visit treatment because it can help homeowners make sure termites do not return. Monthly contracts are most popular because they help homeowners keep up with the regular application of spot treatments and inspections. Homeowners may also choose a single visit without the obligation of a contract, which should cost between $175 and $425. One of the beneficial aspects of working with an exterminator for termites is that companies have many options to treat the problem. Some treatments, like liquid treatments, may require multiple visits. Other treatments, like tenting, may only require a single visit and the occasional inspection a year after the treatment. For some homeowners, a monthly visit is best for keeping up with applications and a severe infestation. Other homeowners may need no more than four visits per year with a quarterly contract or once a year with a yearly contract. 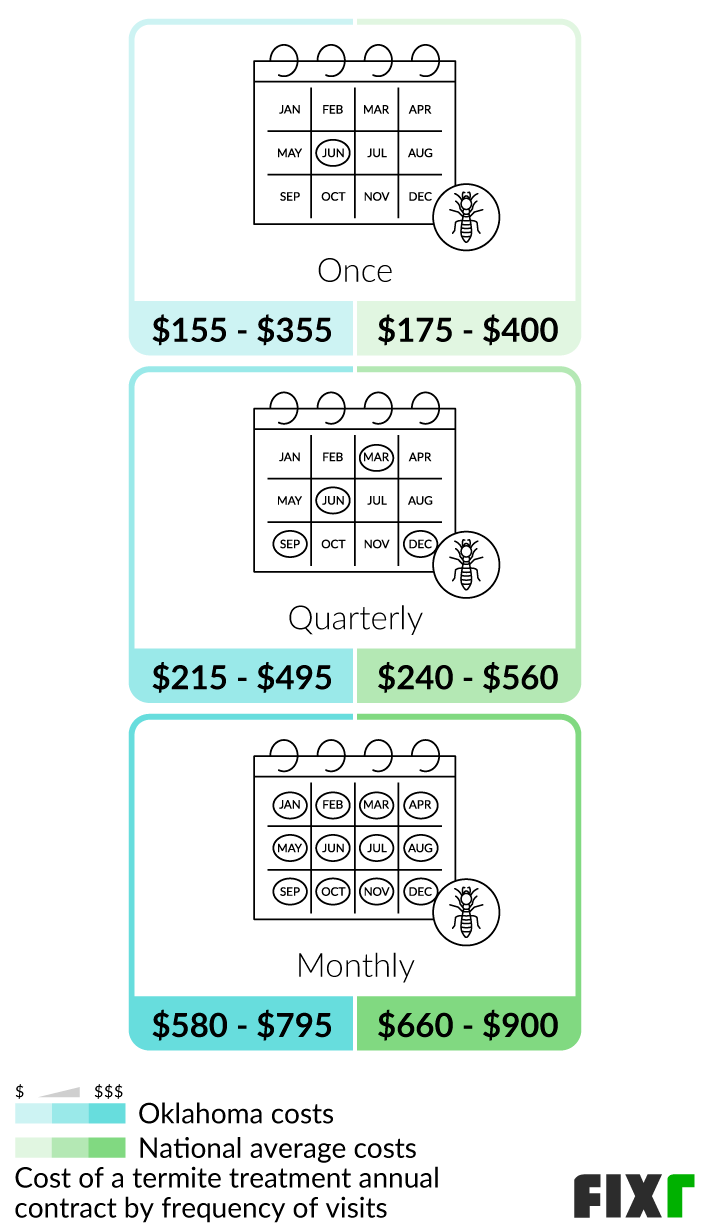 Compare prices from Oklahoma termite specialists near me

Termite Treatment Cost in OKC by Severity of Infestation

An exterminator will base the overall cost of the treatment plan on the amount of time and product required to complete the process. That cost may range from $220 for a small infestation to $5,720 for a severe infestation. A small infestation may not feature any significant damage to the home. Homeowners can count themselves lucky if they catch an infestation while it is still small. These may only require some small spot treatments. An infestation that reaches medium size may cost between $360 and $1,320. Treatments may require multiple visits for extras like bait traps. 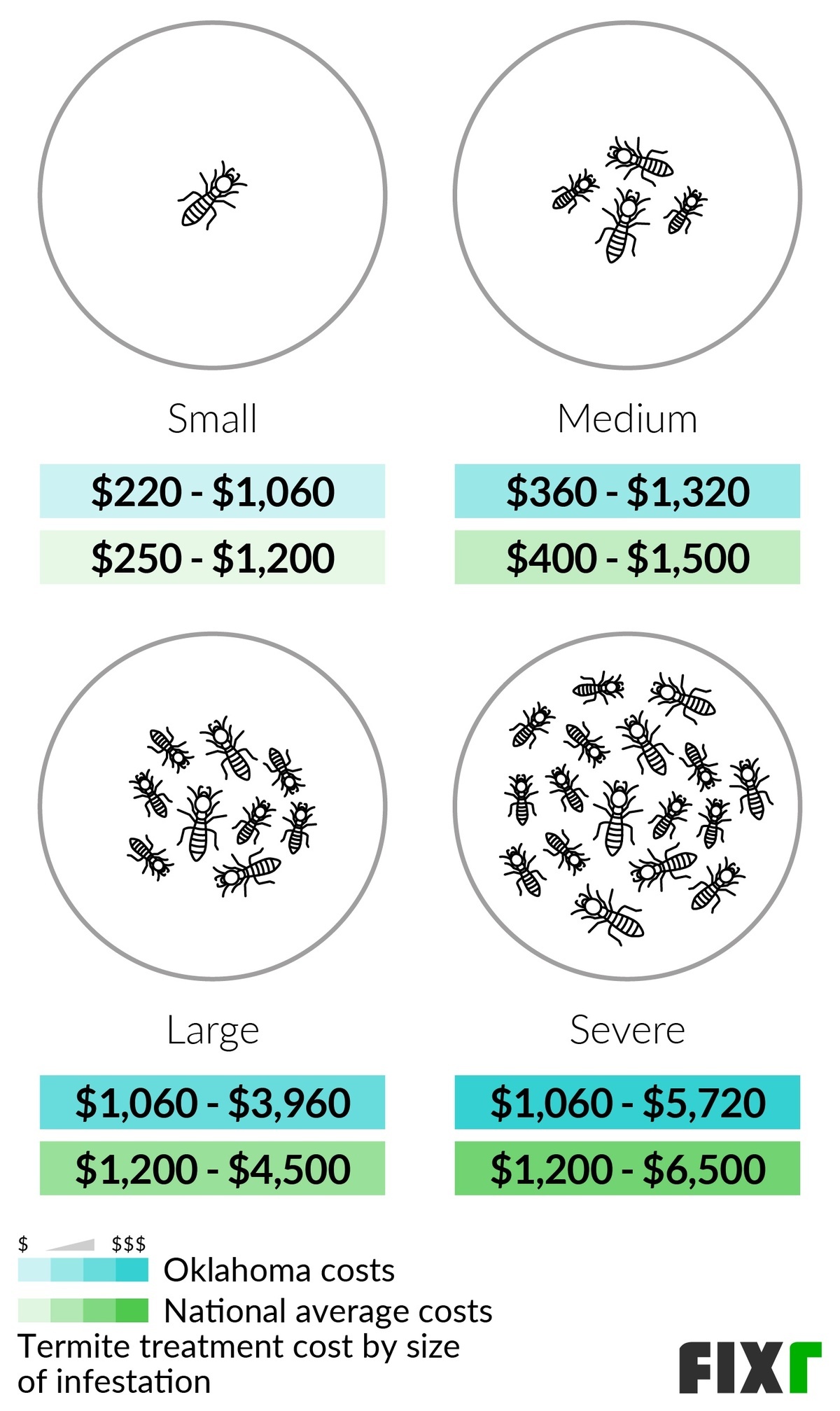 Cost of Termite Treatment in Oklahoma Type of Termite 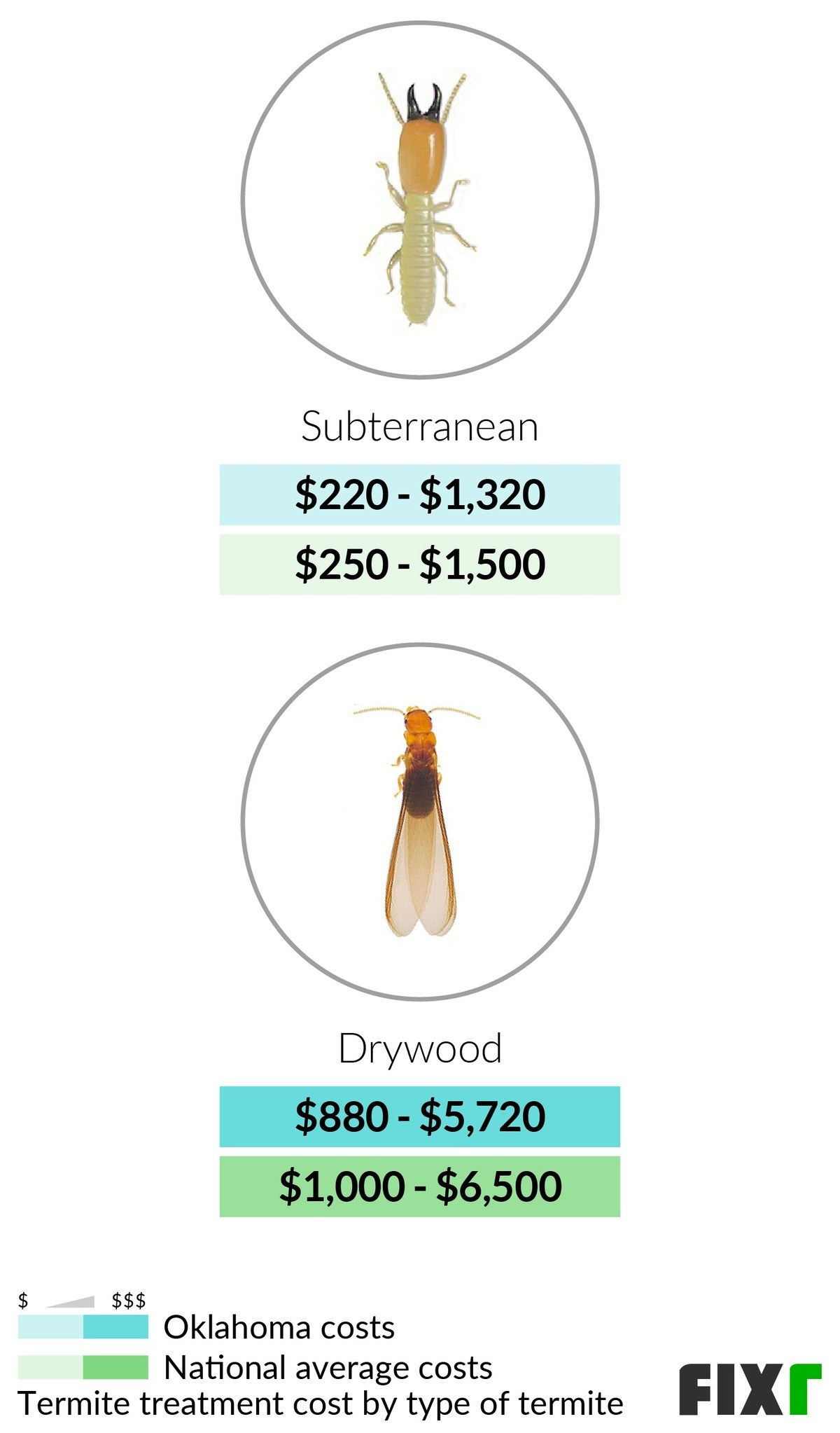 At the cost of $75 to $120, termite inspections are the most cost-effective option for fighting termites. They help homeowners determine whether they have a current infestation and help them ensure that termites do not return after treatment. Some termite companies waive the inspection fee when the homeowner hires the company for service. An inspection takes a few hours. Most exterminators recommend yearly inspections because this provides the most effective schedule. Subterranean termites are very common in Oklahoma. They are capable of severe damage, so it is important to consider regular inspections every year.

During the process, the inspector looks at all the areas around the home that may harbor the insects. Since most infestations are subterranean termites, the inspection includes a walk around the foundation of the home and the basement, where the inspector looks for mud tubes and damage to the foundation from termite colony activity. A severe infestation is often quite obvious and may feature things like destroyed wood and piles of feces. However, small infestations are not always visible without a close look. An inspection is a great help for catching termite infestations before they have a chance to become severe.

Signs of Termites in OKC

Typically, signs of subterranean termites include discarded wings and the mud tubes the insects make while tunneling along and around the foundation of the home. Subterranean termites normally swarm in the spring, which means their wings are most often visible after the winter concludes. However, arid-land subterranean termites also swarm in the fall, so look for wings in the autumn, too. If a home is infested with drywood termites, the evidence appears above ground rather than at the base of the home. Signs may include discarded wings, tiny piles of feces, and wood shavings that are evidence of the termites eating the wood inside the home.

How Often Should You Treat for Termites in Oklahoma?

Termites need treatment as often as they appear in the home. Some treatment plans require regular visits on a monthly or quarterly basis. However, homeowners should always be prepared to start a treatment plan when they find termites. For some Oklahoma homeowners with severe infestations, monthly visits may be the only way to overcome the problem. Other homeowners may want to stick with a yearly inspection to make sure termites have not returned after treatment. Often, an exterminator can help the homeowner figure out the most beneficial schedule for treatment.

How to Prevent Termites in OKC

Nothing is certain when it comes to termites in Oklahoma, especially when it comes to preventing infestations. However, homeowners do have a few options for keeping a home termite-free. One is a regular inspection each year. Even the most vigilant homeowners may miss what a professional might find during an inspection. Homeowners can also consider pre-treatment options if they are building a new house. For protection against subterranean termites, homeowners can have their wood treated and the ground treated before the foundation is poured.

According to the Termite Infestation Probability Zones map, Oklahoma sits in TIP Zone #2, which means moderate to heavy infestation activity is present in the state. All Oklahoma homeowners should expect that their homes are vulnerable to termites.​​

The vast majority of termites in Oklahoma City are subterranean termites, which burrow in the ground. Homeowners may occasionally see drywood termites, but they are much rarer. Dampwood termites are almost non-existent and not really a concern for Oklahomans.

How much does it cost to get rid of termites in Oklahoma in my city?

Cost to get rid of termites in Oklahoma varies greatly by region (and even by zip code). To get free estimates from local contractors, please indicate yours. 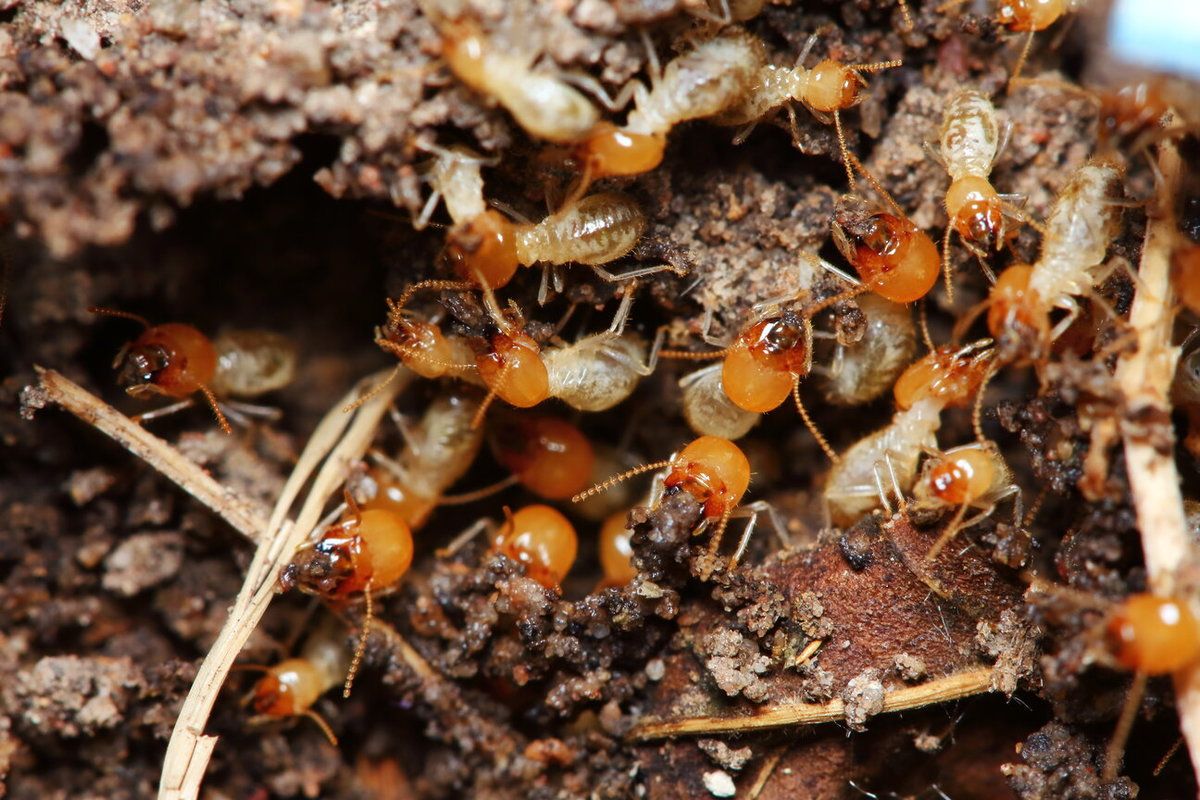