Home improvements and renovations often go hand in hand with homeownership. They’re often necessary to keep your home looking up to date and to help improve its value. Home repairs are also needed, but instead of improving your home’s value, repairs help you maintain the current value. And oftentimes, a home improvement or a full scale renovation may be triggered by the need for a repair.

Americans have been known to renovate every part of their homes from top to bottom, and recent studies indicate that these projects and spending trends will continue to increase in the near future. Some areas tend to get more focus and money than other areas though. While some projects may be triggered by a specific event, whether it’s the market fluctuating or some kind of natural disaster like a hurricane or flood, others are more cosmetic and focus on a home’s appearance. 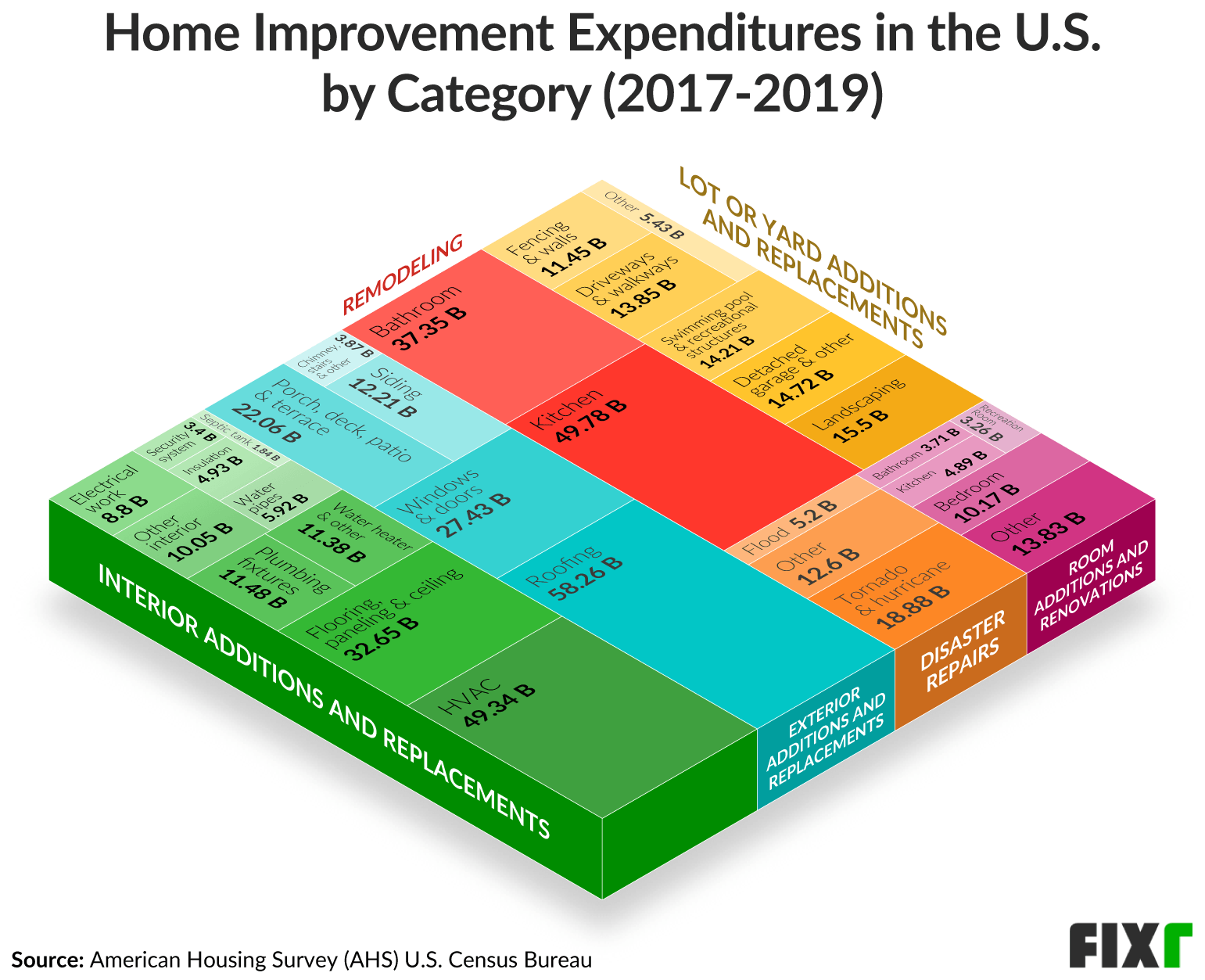 Using information from the 2019 Census, we have created a visualization to show the various categories and amounts of home improvement.

This graphic shows the different reasons that people may spend money on their homes and where they’re spending it. It outlines both renovations (repairs or bringing the home back to its normal state) and remodels (improving your home and its value) by category and specific projects, as well as what the various amounts are. Please note that some of the different category names have been shortened for the visual.

In Which Projects Homeowners Spend Most Money

While homeowners have been known to renovate or remodel nearly every inch of their homes over their lifetimes, there are five areas where people tend to spend the most - roofing, kitchens, HVAC, bathrooms, and common surfaces such as flooring, tiles, and paneling.

The roof is your home’s first line of defense against the elements. It’s also your home’s crowning glory and makes up a big part of its value and curb appeal. When things like hailstones, hurricanes, high winds, and UV rays breakdown the roof, it can cause a lot of internal damage to the home. So it stands to reason that the roof is also where the largest share of the renovation budgets of most homeowners go. Roofing accounts for roughly $58 billion dollars each year. Given that a roof can cost between $3,500 and $40,000 depending on size, pitch, and material, it does make sense that it would take up such a large share of homeowner spending. It is recommended that roofs be inspected twice yearly, which could account for the spending. However, most homeowners carry out this task themselves, with the cause most likely being due to the damage caused by a storm or the appearance of water stains indoors that spurs most people to action.

The kitchen is one of the most frequently remodeled rooms in the home. Kitchens are often remodeled for two reasons: cosmetic updates before resale and major remodels for older kitchens. Many times, those remodels can be triggered by a larger event, such as a leak or finding mold behind a wall. Other times, it may be time to replace the appliances or flooring and it becomes easier for the homeowner to consider the entire remodel at once.

Whatever the reason behind the remodel, kitchens bring in a combined $49 billion dollars each year. The kitchen itself can cost around $20,000 on average for a full remodel with only minor layout changes. A full scale remodel with layout changes can dramatically increase the cost of this project to $75,000 or more.

Whatever the case, kitchen remodels can have an ROI of up to 77% without any structural changes to the room. Combined with the added benefit of attracting new buyers and increasing the joy score for the current owners, it makes sense that this is the most frequently updated room in the home.

HVAC systems also ranked high on the list of areas where people were spending the most, coming in at $49 billion spent. Your HVAC system can include all of the heating, cooling, and vent systems in your home, so every system may look a little different. Some, like geothermal systems, cost a lot to install, but have very little maintenance overall. Others, like traditional hot air furnaces, cost less to install, but need at least some degree of regular maintenance such as filters and periodic cleaning. Central air conditioners require yearly maintenance, while boilers require maintenance and inspection much less often. For nearly every home, however, these systems are integral to the way that people live their lives. They also impact your energy bills, so many people may choose to update or upgrade every so often simply to help reduce energy costs.

Like the kitchen, the bathroom is also one of the most frequently updated rooms in the home. Bathroom remodeling has a total cost of around $37 billion dollars each year. Bathrooms can have various stages of remodeling, like kitchens, which can lead to a wide range of costs. Some may have surface updates or fixture replacements while the basic layout remains the same. Others may completely change the layout of the bathroom, which can significantly increase the costs of the project.

Full size bathrooms tend to cost the most, as the shower and tub areas are the most costly to install. This makes half baths much less costly in general. A full size bathroom can cost between $4,500 and $9,000 to update, while a master bathroom which could have a separate tub and shower can cost as much as $20,000.

With things like smart bathrooms and spa elements topping the list of current bathroom trends, it stands to reason that the amount people are spending on their bathrooms is unlikely to drop anytime soon.

Flooring, paneling, and ceiling tiles combine to make up $37 billion of annual dollars spent on home remodeling and renovation. All three of these surface areas see varying amounts of regular wear. They are also some of the first spaces you see when you enter a room, so it makes sense that people will want to spend more money on updating these than on some other surface areas. Flooring in particular also experiences increased wear and tear, which means that it’s more likely to be updated during a renovation to help the home maintain value than some other areas.

Ceilings see most of their costs during full renovations, additions, and in some types of asbestos removal. These types of things may not happen with the frequency of a flooring update, but they tend to be costly when they do occur, earning the ceiling’s place in the line up of costly projects. Paneling, on the other hand, is typically decorative and can be added during a renovation or a remodel. There are a range of materials and styles available for paneling, and both aspects can impact the final price of a project.

Together, flooring, paneling, and ceilings make up a significant part of a home's interior, and they can all be replaced or installed at the same time. For this reason, it makes sense that American spend a significant amount on these each year.

While people can remodel for different reasons, many renovations and a high amount of money being spent on home repairs tends to follow in the wake of natural disasters. Tornadoes and hurricanes caused the highest disaster-related expenditures, although there is not enough data available to adequately compare these figures to other categories of natural disasters.

From a remodeling stand point, kitchens and bathrooms are the most popular interior areas to improve, but unlike disaster repairs, these don’t tend to have a major outside catalyst for most people. Reasons for bathroom and kitchen remodels may include resale or simply increasing the joy factor in these two high-use areas of the home. Roofing, flooring, paneling, and ceiling projects can follow along these lines and improve a home’s overall aesthetic, but may also be impacted by external factors like storm damage, mold, or severe wear and tear.

While a working HVAC system won’t necessarily add to your home’s appearance, it plays a crucial role in your home’s functionality and efficiency. Particularly in regions that experience more extreme weather, repairing or replacing an HVAC system is a common project that can come with a significant cost.

As long as people own homes, they will be spending money on them. Whether this is for personal updates or to help their properties maintain their value over time, there is no denying the high amounts of money spent on residential properties each year.