How much does it cost to build a house foundation?

Whether you are building a new home or a home addition, you must start with a foundation. The foundation is the most important part of a new build, from supporting it to holding the weight of the structure above. Concrete foundations are the most common because reinforced concrete is strong and stable enough to hold the weight of any home.

Concrete foundations come in many styles that may or may not include walls, which impacts the cost. For a 1,000-square-foot slab foundation 1, the average cost ranges from $4,000 to $18,000, with most people paying around $11,000.

The soil your foundation is built on needs to hold the load and support it. No matter which foundation style you build, it will have footings that evenly distribute the weight over the soil. Soil that is too soft, has too much hydrogen in it, or holds too much moisture like clay can mean that your final foundation is not stable. This is why soil testing 2 is always conducted before building the foundation.

Soil testing happens at several points. The soil the foundation is on must be heavily compacted, so when the foundation is being excavated, the removed soil is tested to see how it will handle the load. The areas where the footings will be laid is compacted and tested for strength. Sometimes, clay-based soils are removed, and the area beneath the foundation is backfilled with another material and then compacted. Pea gravel is generally added to the soil for drainage, so testing enables you to determine exactly how much gravel is necessary.

If the soil is very soft in places, the type of foundation or orientation may be changed to span the soft areas and distribute the load over the compacted spaces. Soil testing 2 costs around $1,200 on average for all the tests necessary for most foundations. If you have extensive issues, however, prices can go as high as $5,000.

There are several types of concrete foundations. Each has its own specific use, depending on the finished foundation, soil type, and climate:

T-shaped 1 or stem-wall foundations are the most common and are used when creating a foundation that will have walls, such as a basement. Footings are placed beneath the frost line, and then the walls are added - the footing will be wider than the walls. The slab is poured last. These foundations are the most expensive to build because they must be poured in three separate parts, with each curing individually. If you want a basement, then this will be the concrete foundation you want. T-shaped foundations cost around $16 to $18 a square foot to pour.

Slab-on-grade foundations are the most common type for areas with no walls. This is a single foundation, several inches thick, with the edges thicker than the center. This is used where the ground does not freeze and is sometimes called a monolithic foundation because it is poured at one time. These are the simplest and fastest foundations to pour, costing between $6 and $12 a square foot on average. They cannot be used in all areas, however, and are not meant for supporting a basement.

Frost-protected 1 foundations are similar to slab-on-grade except they are insulated with rigid polystyrene beneath the foundation. These are also poured at the same time but can be used in areas where the ground freezes. They cost slightly more than a slab-on-grade foundation, starting at around $8 and rising to $14 a square foot on average.

Use pier and beam foundations to create a crawl space. The frame is made of wood or steel beams, and then a thin concrete slab 3 is poured over the frame so that there is a space beneath the concrete. The beams are drilled into the ground to support the foundation and the load above. Not every soil type can support this type of foundation, so testing is important. These foundations are becoming less common, so you may also find it difficult to find someone who can do the work. They are more expensive, starting at $18 a square foot, increasing depending on whether you use wood or steel and how far they must be drilled.

Building for a new home vs raising an existing home

Building a foundation for a new home is always easier and less expensive than raising an existing home to build a basement. Excavating the ground, testing the soil, and pouring the basement foundation is faster and easier on an empty site. Raising the home requires additional equipment to hold it in place, while the foundation is dug and poured, which adds to the cost of the project.

Raising a home to build a foundation costs around $35,000 on average. However, if the rest of the house is structurally sound, then this cost is lower than demolishing the home and rebuilding it with a basement.

Every foundation needs footings to distribute the load. The type of footing is directly tied to the kind of foundation. For example, T-shaped foundations have footings dug and poured first, then the walls, and finally the slab. Slab-on-grade foundations have a thicker edge than the center. This thicker edge is the footing that helps support the load. The cost of pouring the footings is between $3 and $5 a square foot, and in the case of T-shaped foundations, they must be inspected before the rest of the foundation can be poured.

The building process to create a foundation varies depending on the type of foundation you are putting in, but many of the steps are the same. To receive a permit, submit your plans for the entire build. The foundation does not need a separate permit.

The soil is tested, and excavation begins. When pouring a full basement, the footings will be put in first, examined, the walls poured, followed by the slab. When pouring a monolithic slab, gravel is put down for drainage, and the entire slab is poured at once.

The concrete needs anywhere from 1 to 14 days to cure, depending on the weather and conditions. If you have a basement, it will be waterproofed, and then pea gravel and drainage tiles are installed before the rest of the building work proceeds.

Varying labor costs go into building a foundation. Excavation, delivery, pouring, and compacting all have a range of prices. The dirt work comprises most of the labor costs. For a typical slab foundation pour, the labor is around $3,000 out of the $11,000 total. For a basement foundation, expect labor to cost closer to $7,000 out of a $16,000 total due to the additional time needed to pour the foundation in three separate steps, along with the added work to construct the walls.

The deeper you dig for your foundation, the higher the costs. Most of the labor involved is in the soil work, which means that digging, compacting, and readying the site for the pour becomes more intensive the deeper the dig. That is why basements and crawlspaces tend to cost considerably more than slab-style basements. Slabs can be poured with minimal excavation, while basements require more work. The deeper you go, the longer the process and the more expensive the final foundation.

All foundations have at least some drainage, including gravel and weep tiles. If you want additional draining, such as a French drain, this adds up to $5,000.

Many people finish their basements to create more living area for the home. This basement addition costs between $25,000 and $55,000.

If you opt for a frost-free foundation, your concrete will be insulated during the process. If you choose to have a basement foundation, you may also opt to insulate the interior walls using special rigid insulation designed just for this purpose. It adds around $5,000 to the job.

The concrete will set for 2 to 3 weeks on average.

This depends on the type of foundation and may be between 6 and 18 inches.

A footing is what holds the load for the foundation, spreading it out through the soil. Footings are poured first, then the walls, and finally the foundation.​

When poured correctly, a foundation will last as long as your home, upwards of 100 years.​

The soil must be able to be compacted tightly and drain, so no clay or loose soil. 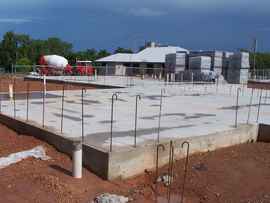 1 Frost-protected: (Also known as T-shaped, Slab foundation) A layer of concrete, poured over a prepared surface of soil or gravel, that supports a house or other building structure 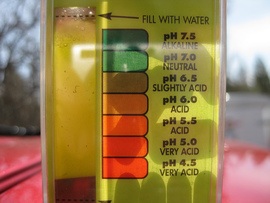 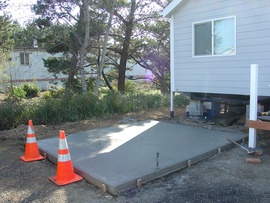 3 Concrete slab: A flat area of concrete that can be used for a variety of purposes, such as a patio or a driveway

How much does it cost to build a house foundation in my city?

Cost to build a house foundation varies greatly by region (and even by zip code). To get free estimates from local contractors, please indicate yours. 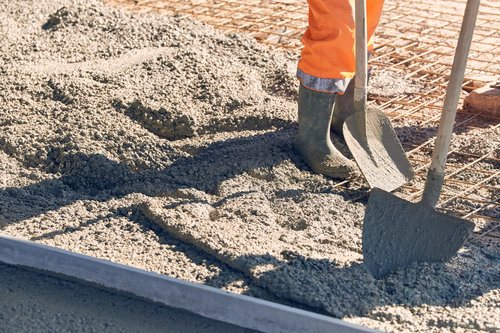