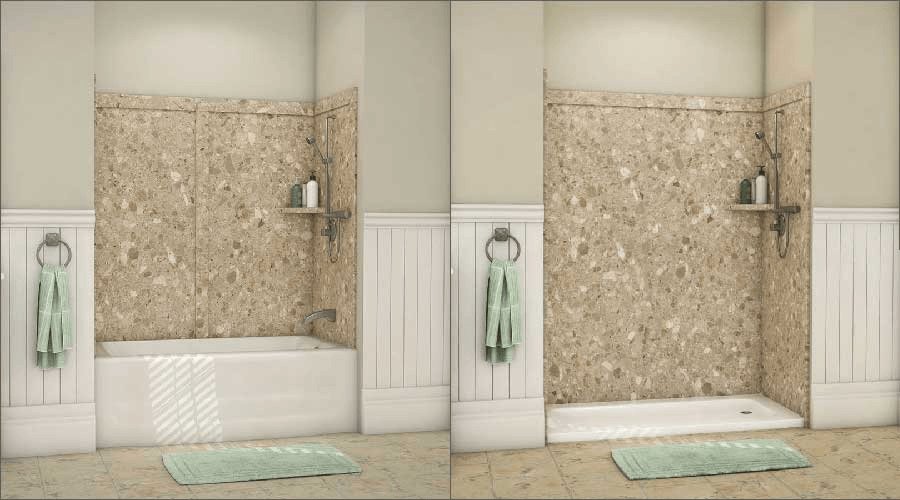 In the past, the average household bathroom would include a bathtub/shower combo. While this was a popular option once upon a time, more recent trends have shown that homeowners have taken a liking to spacious, more modern, walk-in showers.

With these types of showers becoming more favored, many have begun to convert their old tubs into new, walk-in showers. This begs the question: what can you expect to pay for this bathroom project?

In this guide, we’ll take a look at the costs you can expect from a bathtub to shower conversion and what factors can affect the overall price.

Hire a local pro for your shower installation

Cost to convert a bathtub to a shower

The cost for a homeowner to convert a bathtub to a shower will depend on several different factors, including its complexity, material cost, wall materials, and many others.

The first cost you must consider is the cost of removing the existing bathtub. if you are looking at removing an ascot tub and turning it into a shower, this will be one of the simpler conversions.  An ascot tub can be removed for around $200 to $300 depending on the material and size. This cost can increase considerably depending on the weight and size of the bathtub.

However, most of the cost will come from the replacement shower type. A prefab unit is the least expensive method, while a custom shower will fetch the highest price. You will also have additional costs if you are to change the shower’s size, shape, or features. With all this considered, you should expect an average cost of anywhere from $1,000 to $9,000 for a shower installation.

So, combining the cost of the tub removal and the shower installation results in a total price ranging from $1,200 to $9,300 to convert a bathtub to a shower. 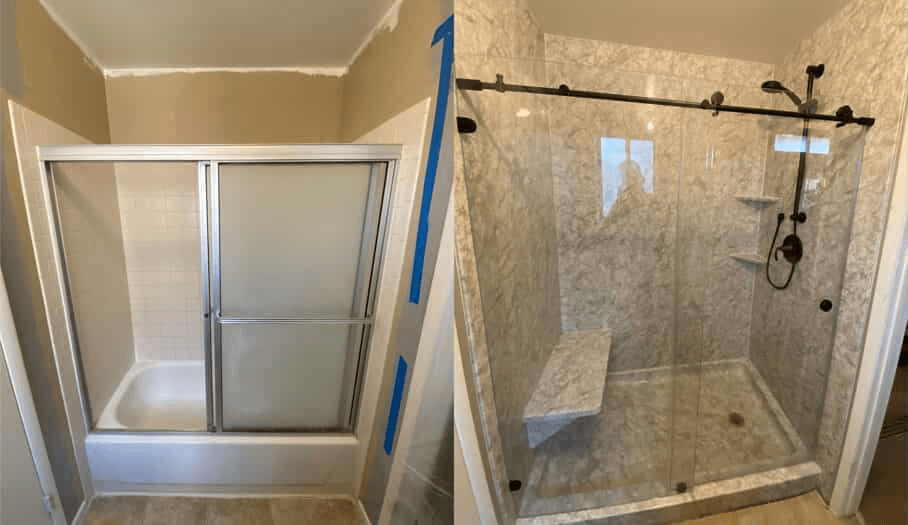 Example of how a bathtub-shower combo can be made into a walk-in shower. Image source: Atlas Plumbing

The total cost of a bathtub to shower remodel can look very different depending on the types of materials you choose. For example, the material you choose for the shower wall will play a major role in the overall cost. You can go for budget options such as fiberglass or an acrylic shower which will keep your cost down. Alternatively, you could choose a higher-end material such as cultured stone or a tiled shower.

While it may seem like a straightforward job to simply remove the existing bathtub, it’s a lot more difficult than it looks. If you are removing a freestanding or one-piece tub it will be a relatively simple and cheap removal. However, if you are required to remove tiling and portions of the wall, then the removal will take far longer and increase the cost.

Removing your current bathtub will often result in either causing or uncovering damages to your bathroom. These types of damages can be anything from cracked tiles to water damage.

Before your new shower is installed, these damages will need to be dealt with and repaired. Depending on the severity of the damages, the cost of the project can rise.

This factor relates to both the location of the shower and the type of shower being installed. Both these aspects can have a huge impact on the difficulty of a shower installation. This is due to different selections requiring varying levels of new plumbing work and additional labor.

Therefore, it is important to consult with a professional before undertaking any home improvement project. Bathroom remodeling projects such as this should always be left to the professionals and never as a DIY project.

Your selection of shower features will also have a huge impact on the overall cost of the project. These features include shower heads, shower doors, taps, faucets, and shower pans.

You may think that the smaller the shower, the fewer materials are required and therefore the lower the cost. While this is often the case, there are also circumstances where these rules don’t apply.

It is common for different shower types to have set sizes, and any variation from this size will result in additional costs. So, by choosing standard sizing, you can save yourself money.

Tips for a bathtub to shower conversion

The National Kitchen and Bath Association (NKBA) recommends that a shower stall be at least 36x36 inches wide. However, most building codes will allow a shower to be as small as 30 inches by 30 inches.

With this being considered, you may have to make additional modifications to your bathroom remodel if you were to install the appropriate shower. Modifications such as wall extensions will often be required if you’re installing a shower where an alcove bathtub was.

It is quite common for a bathtub to have a window sitting directly above it, if this is the case for your bathtub, converting to a shower may not be as easy as you think.

Having a window can raise several issues that could otherwise be avoided. The main issue is that it significantly increases the likelihood of mold in your walls. A window in your shower will give water direct access to your walls and can begin wreaking havoc on your bathroom walls.

This can result in far more maintenance being required to avoid mold and mildew and in some cases, your shower will need to be replaced entirely.

To prevent running into any future issues, avoid installing your walk-in shower where there is a window.

Do not remove your only bathtub

When it comes to replacing your only existing tub with a walk-in shower, there is no right or wrong answer. But, before doing so, you should understand the effect it can have on the resale value of your property.

If you were to talk with a real estate agent today, they would likely strongly advise against removing your home's only bathtub. This is mainly due to preserving the marketability of your property.

Many potential home buyers, especially those with young children, will often require their home to have at least one bathtub for convenience and functionality. So, removing your only bathtub could pose a big risk to your property's value.

Should you start a bathtub to shower conversion?

There are many reasons why a bathtub-to-shower conversion could be a great decision. From a financial standpoint, unlike many remodeling projects which won’t have an impressive return on investment, installing a new modern walk-in shower could add value to your home (as long as it’s not your only bathtub). By replacing your bathtub you will also save a considerable amount on your monthly water bill.

So, whether or not you should take on a bathtub-to-shower conversion and invest the $1,200 to $9,300 will depend on your specific circumstances.

Convert your tub to a shower today