The kitchen is often considered the heart of the home. It plays a vital role in fueling our daily lives. Households come together in the kitchen to cook, eat, entertain, and nowadays even work and study. The average adult spends over 400 hours a year in the kitchen. Like a heart, we all only have one kitchen, and it is constantly functioning for us. But it can be a costly part of the home.

With electricity prices having soared over recent months along with high inflation, it is worth taking a moment to see which kitchen appliances are costing us the most money to use. In this article we break down the average cost to run each appliance in the kitchen and take a look at which states it is the most expensive to run a kitchen. 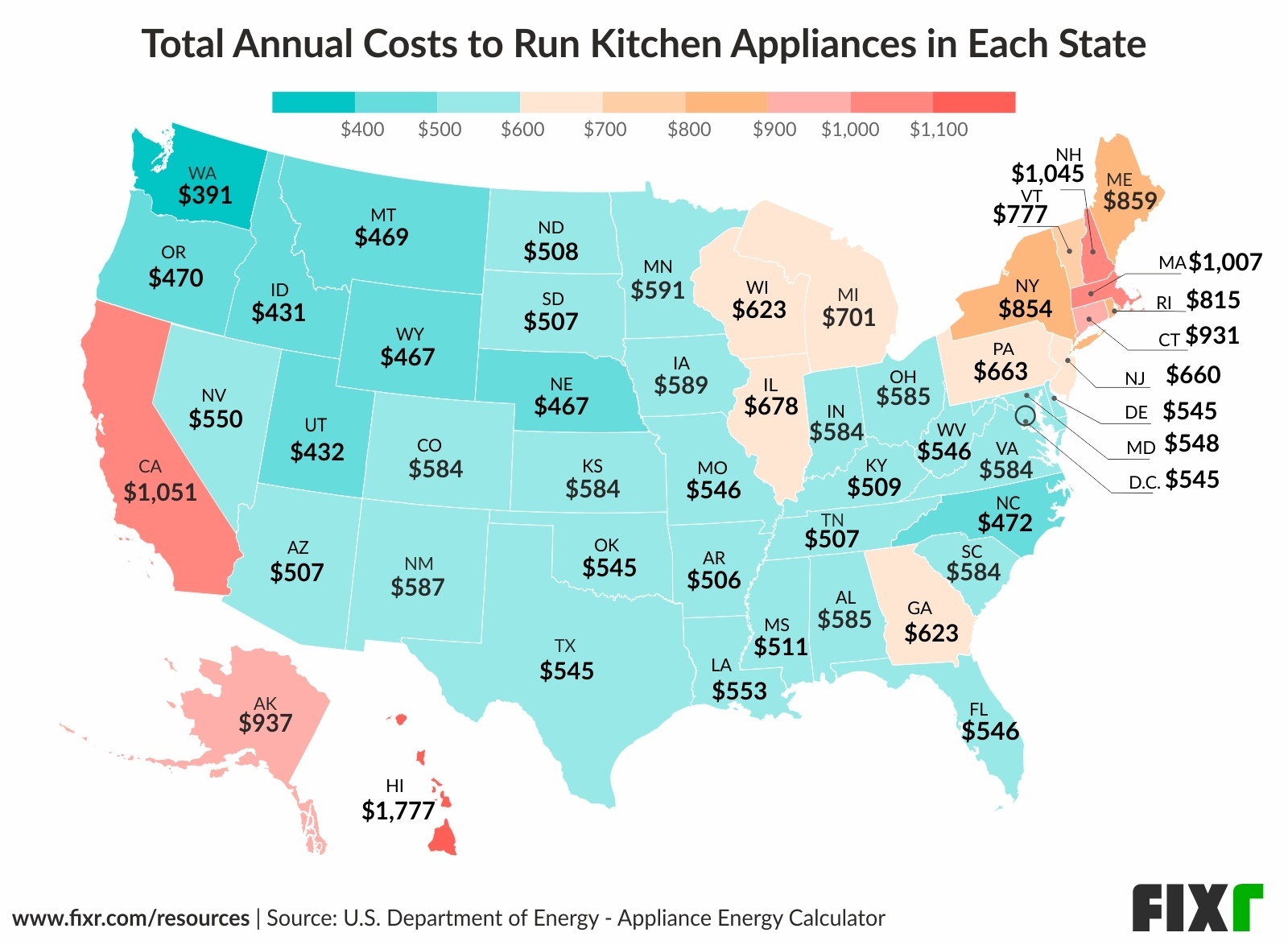 Top 10 most expensive states to run a kitchen

In the map above we can see how much it costs on average to run a kitchen in each state annually, with colors highlighting the cheapest to the most expensive. To create the map we considered the average amount of time, and subsequent amount of electricity, used for the following appliances: refrigerator, dishwasher, microwave oven, coffee maker, deep fryer, slow cooker, toaster, oven, stove top, and range hood.

We can see that Hawaii is the state where it is the most expensive to run a kitchen. Homeowners in Hawaii will spend an average of $1,777 a year on the aforementioned appliances over 12 months. This is notably more expensive than other states. For example, the next most expensive are California ($1,051), New Hampshire ($1,051), and Massachusetts ($1,007). At the other end of the scale, the cheapest state to run kitchen appliances is Washington with an average cost of $391 annually.

The cost to run a kitchen reflects the cost of electricity in each state, meaning that if you live in an area where electricity prices are high it might be worth taking a look below to see where most of that money is going. Discovering which appliances cost the most to run can help you make decisions on how to adjust your habits or the change the appliances themselves to more energy efficient versions in order to bring costs down.

How Much Are Kitchen Appliances Adding to Your Electricity Bill? 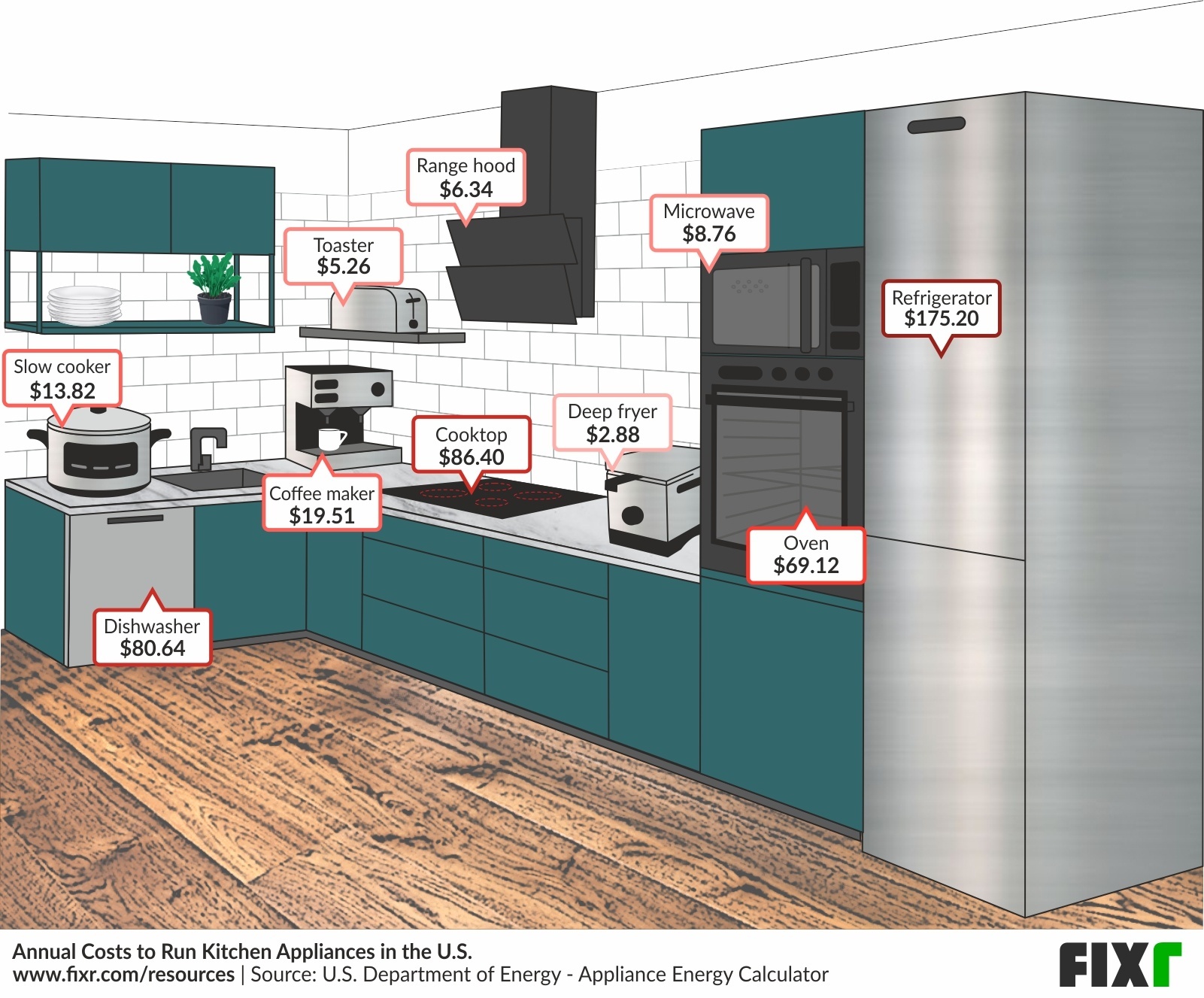 In the illustration above you can see which appliances are the ones that cost the most money to run each year on average in the U.S.

The Top 3 Most Expensive Electricity Hogs in Your Kitchen

On average it costs $175.20 per year to run a refrigerator. It’s no surprise that the refrigerator is the biggest consumer of electricity in the kitchen as it needs to be running permanently; 24 hours a day, 365 days a year. Not only that, it is in fact one of the top consumers of energy in the whole home, averaging 4% of the total energy consumption. If you have an old refrigerator, one way to save on costs in the long term is by upgrading to an Energy Star rated model. Older refrigerators use around 2,000-3,000 kWh of electricity and can cost you around $300 annually. The upfront average cost to install a new refrigerator is between $1,000 and $3,000.

Significantly cheaper than a refrigerator, electric cooktops are still the second most expensive appliance to run in the kitchen. They cost an average of $86.40 a year to use. Playing a big part in cooking meals, most homeowners use the cooktop 5 times a week, for around 2 hours each day.

Dishwashers are the third most costly appliance to run in the kitchen. The average yearly spend to run a dishwasher is roughly $80.64. Like cooktops, this is based on the fact that most homeowners run their dishwasher 5 times a week. People often debate whether it is more energy efficient to wash dishes by hand or with the use of a dishwasher. It turns out that an Energy Star rated dishwasher will consume less water than washing by hand. So while you may be paying out on electricity, you’ll be saving on water. The average cost to install a dishwasher is between $700-$1,970.

The Top 3 Minor Contributors to Your Electricity Bill

Fried food is a favorite for many, and there’s a good reason for it. Other than being an easier way to prepare meals, a deep fryer is cheap to run. It costs a mere $2.88 on average a year to run. Most Americans will use one for 15 minutes a day, 92 days of the year. This is a huge difference in cost when compared to cooktops and ovens.

A toaster is not a main appliance for preparing meals, and therefore it comes as no surprise that its yearly costs are low. The quick method of preparing toast means most households only use it for an average of 6 minutes a day. While wattage is relatively high compared to some other appliances, the short time usage keeps costs down.

Range hoods are used in conjunction with the cooktop to keep the air clean of steam, smoke, and heavy odors while cooking. While it might be necessary to keep it running a few minutes after, the range hood should only be used for around 1-2 hours. The range hood uses significantly less electricity than a cooktop however, meaning the annual average cost to run one is $6.34.

Irena is an industry analyst at Fixr.com. She analyzes and looks for visual ways to simplify data. She researches and writes about home improvement and personal finance.