The average cost of installing a mosquito misting system is around $2,500.

How much does it cost to install a mosquito misting system?

If you like to spend time outdoors during the warmer months of the year, you may want to consider installing a pest control system to help you deal with insects such as mosquitos. Mosquito misting systems are one of the fastest growing methods of controlling pests and insects around homes.

Misting systems come in multiple sizes to accommodate different properties and needs. The average homeowner installing a 30-nozzle drum system in their yard spends around $2,500 on the system and professional installation.

Like many pest control systems, mosquito misting has its positive and negative attributes. The system is fairly easy to set up and use and costs around $2 to $3 per day to run. The various pesticides used in the system are considered non-toxic, and 100% natural solutions are available as well.

The system is fairly discrete and, in many instances, can be automatically or remotely controlled. Some systems are also easy to set up for DIY homeowners.

The system may not be very reliable, however, since mosquitoes migrate frequently. New insects will continuously visit your yard, so the system must be in constant operation. While the pesticides are considered safe, there is always a chance of contaminating nearby water or plant life, and many of the pesticides used may kill aquatic life in nearby water.

In addition, the system may not be entirely effective on its own. So, it is still recommended that homeowners take other steps to protect their properties from mosquitoes, including removing any standing water.

Finally, there is no testing method that goes hand in hand with the systems. This means that the system will continue to spray even if there are no mosquitoes or other pests in the vicinity.

There are two basic types of mosquito misting systems, and both operate in similar ways. They funnel pesticide and water through tubing to strategically placed nozzles and spray the pesticide around the perimeter of your property. The biggest difference between the two systems is that one is tankless, while the other uses a 55-gallon drum.

In the drum system, a larger amount of pesticide and water is mixed up by you before adding to the drum. The drum agitates and releases the mixture at timed intervals.

Both operate on a set schedule, manually, or by remote control. Another difference is in the size of the unit. A tankless system takes up relatively little room and can be placed anywhere, while a drum needs more space. The drum also requires slightly more work to get it going. The costs for a drum-based system start at around $900, while the costs for a tankless system start at around $1,500.

The mosquito misting system is designed to run twice a day during warmer weather. Depending on where you live, this could be for a few months a year or all year long. In either case, you need to purchase insecticide for the system, either the concentrate for the tankless system or the mix for the drums.

Typically, the costs work out to $2 to $3 per day depending on the type of system and insecticide. You have a choice of different chemicals to use. The most popular is Pyrethrin, which is derived from the chrysanthemum flower and is considered safe for children and pets. A synthetic version of this chemical is called Permethrin, and it is equally safe and available. Piperonyl Butoxide, which is also in the same chemical family, is another option. This chemical can be an endocrine disruptor that may cause cancer, so it is not widely used.

An all-green option is available for some systems that uses a mixture of peppermint oil and other essential oils, but this is not considered as effective as Pyrethrin. All these chemicals can be purchased for $30 to $90 per bottle.

As with many things, location is everything when it comes to a misting system. Ideally, the nozzles should be positioned in discrete areas around the perimeter of your property. They should not be installed near air conditioners, vents, or other air intake areas of the house. They should not be installed more than 10 feet off the ground and should be evenly spaced for the best coverage. Keep them away from ponds and other aquatic features in the yard, such as koi 1 ponds. The average yard uses 30 nozzles, but you may need more or fewer depending on the shape of your yard and the area you are covering.

Regardless of what type of system you use, it will involve tubing to take the pesticide from the intake or drum to the nozzles, which are what propel the mist over your yard. The standard system includes roughly 30 nozzles, which should be enough to cover the average yard of up to a ¼ of an acre. However, large properties may need as many as 60 nozzles to cover the area adequately. Additional nozzles can be purchased for around $15 per piece, but they may be cheaper purchased in sets.

Installation of a mosquito misting system is simple, and many homeowners choose to do the install themselves. Installation involves finding a location for the drum or intake system, providing water to the system, and then running the tubing from the system out to the nozzles. Ideally, the tubing should be around the perimeter of the property and out of the way. It may be tied off to fencing, trees, or parts of your home. Fasteners 2 are used to hold the nozzles and tubing in the correct position. The entire process only takes a few hours from start to finish and is non-invasive.

Professional installation of a mosquito misting system varies in cost depending on several factors, such as the size of your property, how difficult it is to run the tubing, the type of system, and the location of the nozzles. Labor costs typically run from $1,000 to $3,000, with most homeowners paying somewhere around $1,250 to $1,500 for a ¼-acre system.

Whether you want a system you can install yourself or one you can have professionally installed, you have choices in terms of which brand to use. There are a few top brands that offer a lot of choices for homeowners.

Costs vary depending on the type and size of the system as well as installation, but most people pay around $2,500 for a ¼-acre yard.

Mosquito misting systems as a part of a mosquito-control protocol can help reduce the number of insects in the area.

Patio misters use between ½ to 1½ gallons of water per hour.

Yes, misters work in humid climates, but they should not be used in the rain, below 50ºF (10ºC), or in high wind conditions.

Misters should be no more than 10 feet off the ground for best results.

Nozzles may clog if you have hard water 3, which can leave deposits behind. Soak the nozzles in white vinegar to remove the deposits.​ 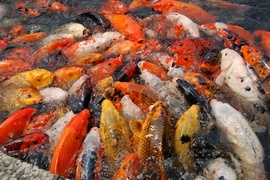 1 Koi: A Japanese variety of carp which is bred for decorative use, such as in outdoor or indoor ornamental ponds
2 Fasteners: Hardware used to attach two or more objects to each other. A common example is a nail
3 Hard water: Water that is high in mineral content. It often leads to a buildup of scale

How much does it cost to install a mosquito misting system in my city?

Cost to install a mosquito misting system varies greatly by region (and even by zip code). To get free estimates from local contractors, please indicate yours. 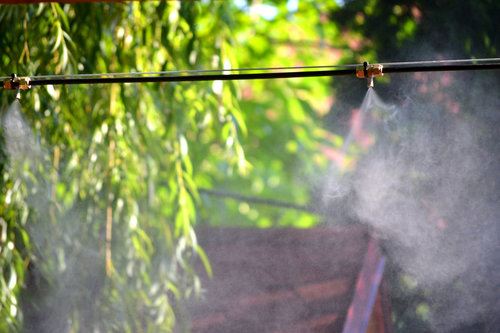