The average cost to exterminate murder hornets is $450​.

How Much Does It Cost to Exterminate Murder Hornets?

You may have heard of the famous ‘murder hornet’. The Asian Giant Hornet is the latest in threats to the well-being and safety of people as well as honeybees. These scary creatures can decimate our bee population as well as become a threat to human lives. Due to the concern of murder hornets making their way into the United States, finding a way to exterminate them is of grave concern. While we don’t know much about them, these killer hornets need to be removed and destroyed to avoid further problems.

While agricultural authorities are asking sightings to be reported immediately to your state’s department of agriculture, pest control services are striving to learn more about exterminating these creatures. The average cost to exterminate murder hornets ranges from $300-$600, with the average homeowner spending around $450 on murder hornet nest removal and inspection for further infestation.

According to Staff Sgt. Vincent Sarver, 26, an entomologist in the 374th Civil Engineer Squadron, the sting is painful. However, Sarver states that the real problem is the fact that the killer hornets produce a chemical that releases during a sting. Once released, it summons more murder hornets. You can see how this would be very dangerous, particularly for someone who is allergic. If stung, the victim will need penicillin to treat swelling and inflammation that can lead to organ failure. So, can murder hornets kill? Yes, they can, depending on the intensity of the attack or if the person is allergic. The sting of one murder hornet is excruciating. It is believed that one sting could kill a small rodent.

Murder Hornets in the US

Murder hornets or the Asian Giant Hornet orginated in Asia. They cover Russia, Japan, Thailand, and Myanmar. In fact, in Japan, about 40-50 people per year die from the sting of these pests. It is believed that these mysterious creatures came to the US by hitchhiking on a person or shipping container. The first sighting was in 2016 when a package inspector discovered an entire nest of murder hornet pupae and larvae. The container was identified as an arthritis pain aid that comes from the hornet’s liquor. The second sighting was in Vancouver, Canada in September 2019. A large nest was found on a footpath. Lastly, the killer hornets were seen in Blaine, Washington. In all cases, the hornets were killed and hives destroyed. However, there have been unconfirmed sightings in Washington and Canada in 2020. 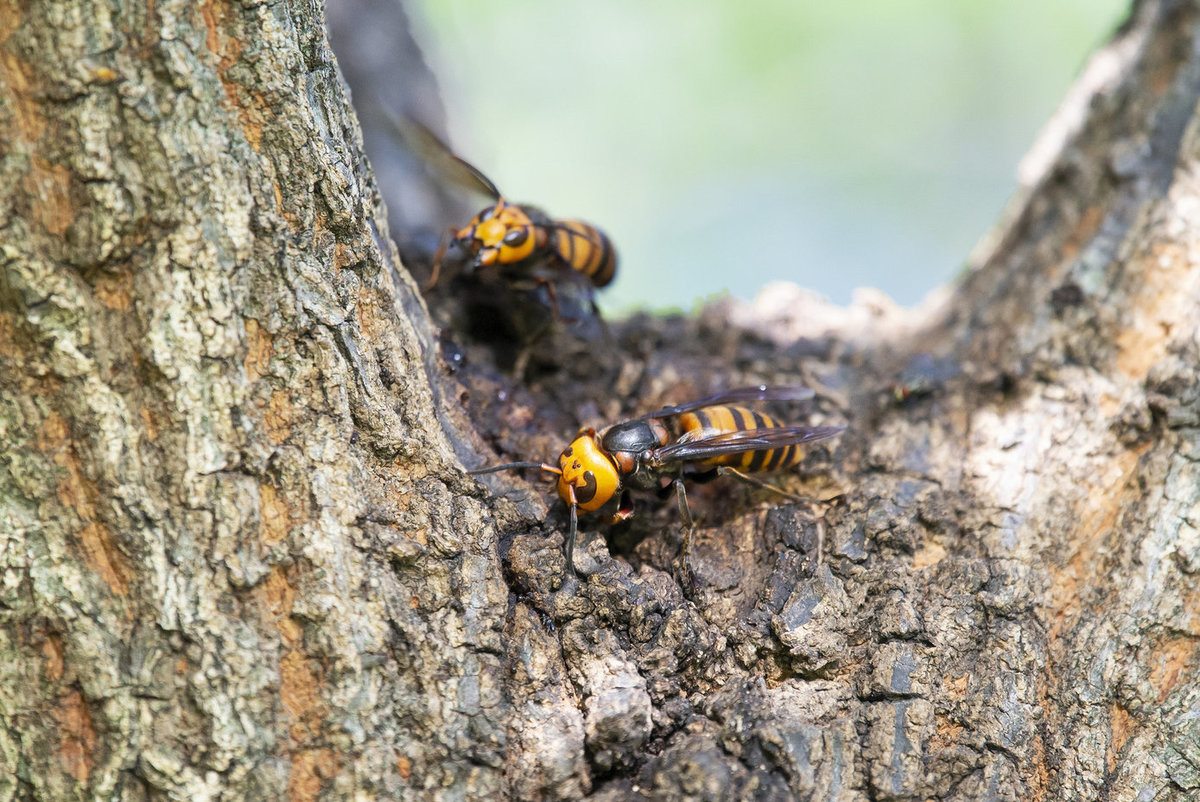 Where Do Murder Hornets Live?

Nests are generally underground so the hornets come out if stepped on or you get too close, usually within two feet. This can be a problem for hikers and hunters in particular. If you are in the middle of nowhere and get stung, the probability of dying is much higher due to medical help being so far away. Outdoor enthusiasts should keep antihistamine and ice on hand in case of a sting.

Since these large insects can be very dangerous, authorities have instructed anyone who finds them to call the Washington State Department of Agriculture or your state’s agricultural department immediately. Do not approach the nest or attempt to remove it or destroy it.

In British Columbia, officials have tried glue traps to no avail. Scientists are developing a bottle trap that would include a radio transmitter that attaches to the pest. Another idea is a bright colored, plastic ribbon that would tag the killer hornets. This would enable humans to track the hornets back to their nest to destroy it. In addition, an infrared light is being invented that would be able to detect the hornets in nature. This method is, so far, unsuccessful.

Known as the Vespa mandarinia in the science world, a full grown queen murder hornet is the largest hornet in the world. Measuring between 1.5-2 inches, with a wingspan of almost three inches, a killer hornet is 3-4 times the size of a Western honeybee. It is nearly double the size of a typical wasp and the amount of venom that it releases during a sting is much greater than its counterparts. Its stinger is longer than that of a wasp or bee and the pain level of a sting is much worse. Those who have been stung by the murder hornets say it is equivalent to being stung by 3-10 yellow jackets - so quite painful.

All About Murder Hornets

The Asian Giant hornet packs a mighty neurotoxin in it’s sting. According to an entomologist and beekeeper in Nanaimo, British Columbia, Conrad Bérubé, the sting made his entire leg ache like he had the flu. He also stated it was the most painful bite he had ever had. The killer hornet’s stinger is able to penetrate traditional beekeeper clothing.

Although often confused with other hornets, the killer hornet has a distinctive feature - a solid orange head. The problem is if you get close enough to see that, you may get stung. Report any possible sightings to your state’s Department of Agriculture. Do not attempt to kill or capture as you may get stung. 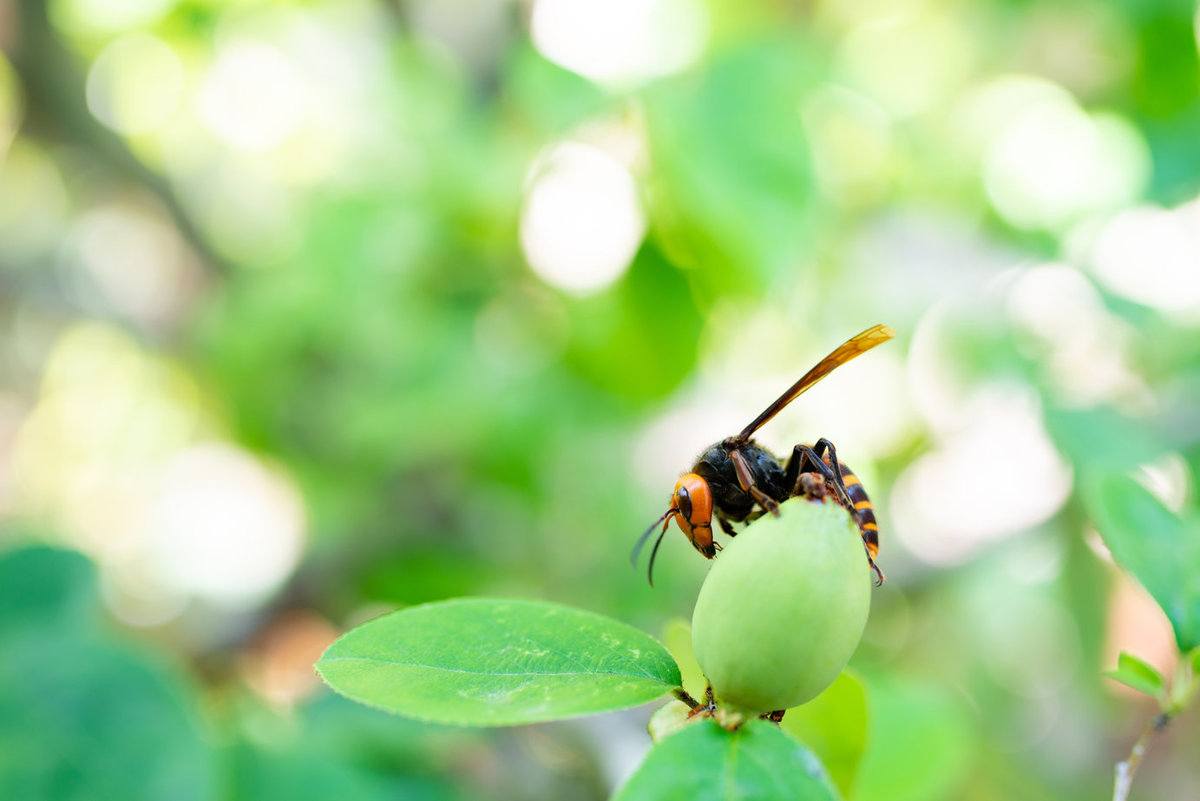 Murder hornets and bees are extremely different. Bees’ bodies are rounder and they feed on nectar. Their bodies are fuzzy which picks up pollen and then distributes it to other flowers. Though bees do sting, they generally only do so when protecting their hive. There are over 20,000 species of bees native to different areas. In the US, there are over 4,000 types of bees spanning different areas and ecosystems.

The main concern that many of us have about murder hornets is not the danger to humans. Unless someone is allergic or is stung multiple times, these pesky creatures are more dangerous to the population of honeybees. Traveling alone and foraging for beetles during the winter and spring, the purpose of the killer hornet changes in late summer into early fall. Becoming an extreme predator, the murder hornets invade entire beehives. They tear off the heads of the bees and escape with the thorax as well as stealing all of the larvae and pupae. Back at their own hive, these monster insects feed their young with the bee bodies. Due to the amount of damage they can do in a short time, there is concern among beekeepers and agricultural officials over the extinction of our honeybees. Honeybees not only produce honey, but they are also the main pollinators of plants and flowers. Our ecosystem would be severely disrupted by the loss of too many honeybees.

Beekeepers are looking for methods to protect the beehives from pests. Some are creating smaller openings for the bees to come and go through but that are too small for the hornets to penetrate. Others have tried using a screen at the front of the hive to distract the hornets from the hive where the bees are actually located. It is vital that we find ways to protect our bee population as we would lose many of the fruits and vegetables we eat if our bees disappear.

Wasps are smaller than murder hornets. They also serve a purpose in our ecosystem as they prey on spiders, insects, flies, and caterpillars. Just like murder hornets, wasps do sting but their sting is not nearly as toxic as the murder hornet. The danger to humans is about the same in terms of allergy or multiple stings - not good. Wasps are easier to see as they typically build nests in plain sight. However, some do build their nest underground. Wasps are easily aggravated and can sting you for no reason at all. Murder hornets tend to be aggressive towards humans only upon being disturbed.

How to Prevent Murder Hornets

While experts are working hard to eliminate these concerning hornets, there may be some ways to keep them away from your home. Planting citronella, thyme, and eucalyptus may be a deterrent to hornets and wasps but it is not yet known if these plants will work with murder hornets. As killer hornets like to nest in decaying logs, keeping your property clear of these may also help. Forest type areas are also a place that murder hornets like to nest.

Professional pest control companies can spray your home on a regular basis, monthly or quarterly to discourage the invasion of murder hornets or other stinging pests. Monthly or quarterly treatments cost $40-$100 a month or $80-$200 per quarter. You can also have small openings, gaps, or holes sealed to keep out flying creatures such as the murder hornet.

Yes, experts say that as the stinger of a murder hornet is very long, it can even penetrate beekeeper clothing.

They are not all over the US. Murder hornets have been spotted in Washington state and Western Canada.

The murder hornet originated in Asia, with sightings in Russia, Japan, Thailand, and Myanmar.

Murder hornets are the largest hornet in the world. It is said their sting is extremely painful and can be deadly if you are allergic or experience multiple stings. They are also a huge threat to the bee population as they feed on adults, larvae, and pupa in the beehive.

The sting of a hornet can kill based on the individual. Those with allergies or who become stung multiple times can most certainly die from a hornet sting. In addition, if you are not near a medical facility and sustain a sting, you could die without the proper medical attention to help you.

Hornets eat spiders, flies and caterpillars that can destroy your garden. Thismeans that hornets are good for control of other creatures that would eat your produce or flowers.

The largest hornet is the Asian Giant Hornet - better known as ‘murder hornet’. These pests can grow to 1.5-2 inches in length and sport a 3 inch wingspan.

They are larger than any other hornet, wasp or bee. At 1.5-2.5 inches, murder hornets can have a wingspan of 3 inches

How much does it cost to exterminate murder hornets in my city?

Cost to exterminate murder hornets varies greatly by region (and even by zip code). To get free estimates from local contractors, please indicate yours. 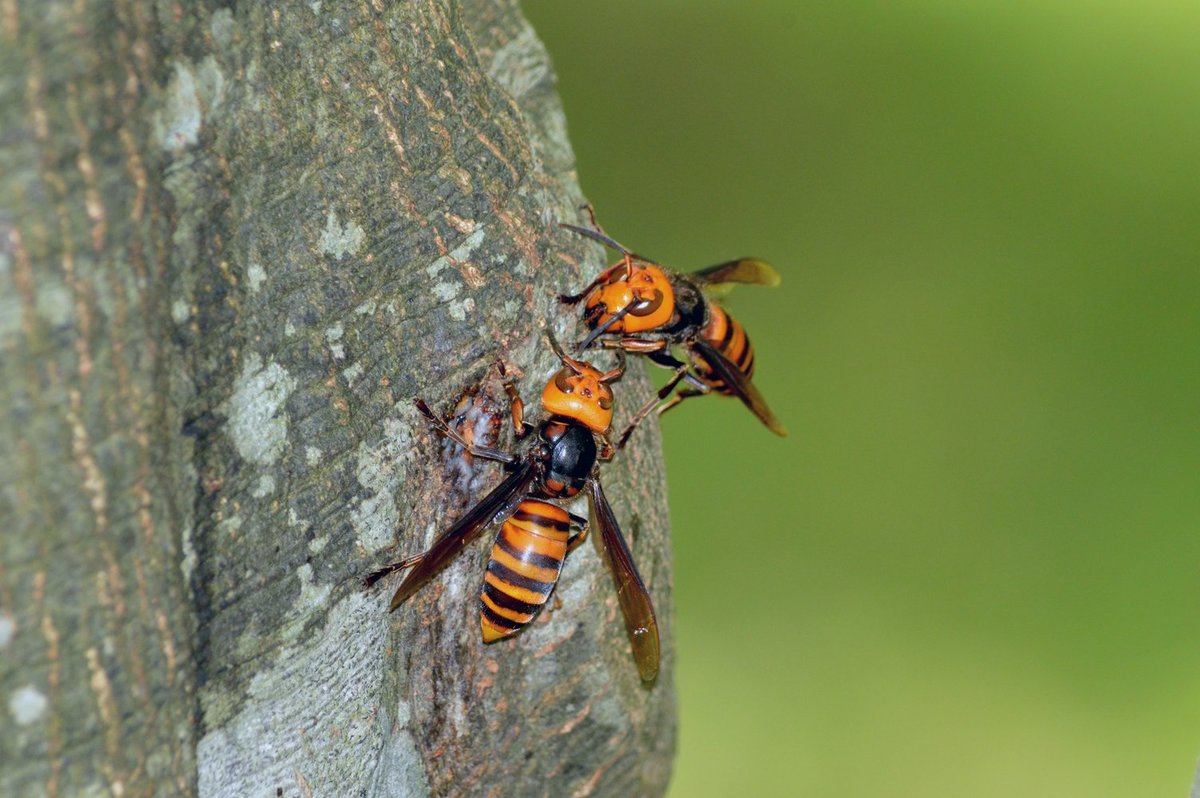