How Much Does Termite Treatment Cost in Maryland?

National Average Range:
$325 - $1,300
Get free estimates from animal/pest control specialists near you

The most common termites in Maryland are Eastern subterranean termites. They are the only termite species that is indigenous to Maryland. Termites are common across the United States and cause billions of dollars of damage. They are a cause for concern for Maryland homeowners. Termite infestations in Maryland may grow for many years without detection because most colonies live underground. Their presence is only made obvious when a homeowner starts to see damage to their home. Unfortunately, many homeowners do not find out they have termites until they are a severe problem.

Treating termites in Maryland costs approximately $560, equal to a liquid treatment on a 2,500 sq.ft. home. Treatment in Maryland for termites ranges from $325 to $1,300, depending on how many termites have infested a home. On the low side, Maryland homeowners should expect to pay around $260 for treatment, including a basic inspection and a barrier treatment placed around a small property. For the largest infestations, the cost to treat approaches $7,000 and involves a full house heat treatment and a barrier treatment for a 2,500 sq.ft. residence.

Tent vs No Tent Termite Treatment Cost in Maryland

Termite treatment companies in Maryland have two main treatment options at their disposal. The first type is tenting, used to fight drywood termites in Maryland. Tenting requires the treatment company to put a large drape over the entire home, seal it, and deliver chemicals or heat into the structure to kill termites. Drywood termites are not a significant threat to Maryland homeowners. For jobs that require tenting, the average cost is between $1.10 and $3.25 per sq.ft., which is higher than the $1 to $3 per sq.ft. for the entire country.

Most termite extermination plans feature tentless applications, which cost between $3.25 and $17.20 per linear foot, a little higher than the national average of $3 to $16 per linear foot. These treatments might include spot treatments, bait systems, soil treatments, or liquid treatments. Significant infestations will often require multiple types of tentless treatments during each visit. 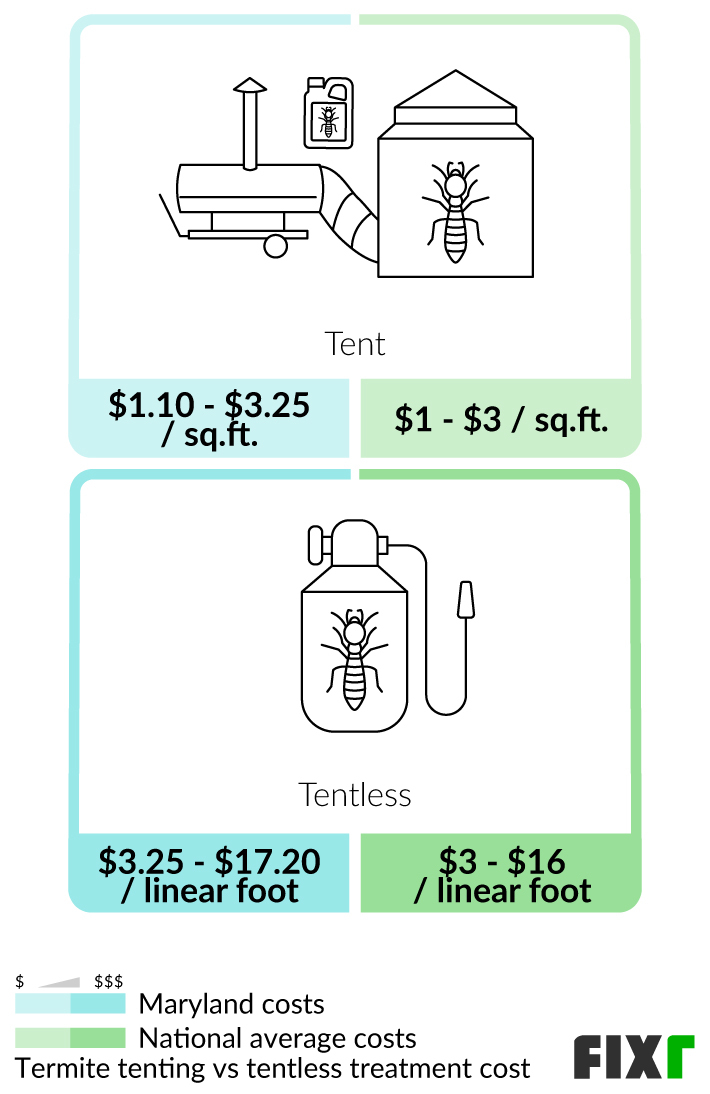 Compare prices from termite extermination companies near me

Termite treatments in Maryland measured by the square foot range from $1.10 to $3.25. These costs are just a little higher than the national average because Maryland’s cost of living is higher than elsewhere. Homes in Maryland are a little larger than elsewhere, so it is common to see prices in the $2,150 to $6,490 range for an average size home of 2,000 sq.ft. Exterminators use square foot measurements to price their tent treatments and fight drywood termites. Even if a house does not fit within one of the convenient sizes in the table below, it is just a matter of multiplying the per-square-foot costs to get an idea of the range. 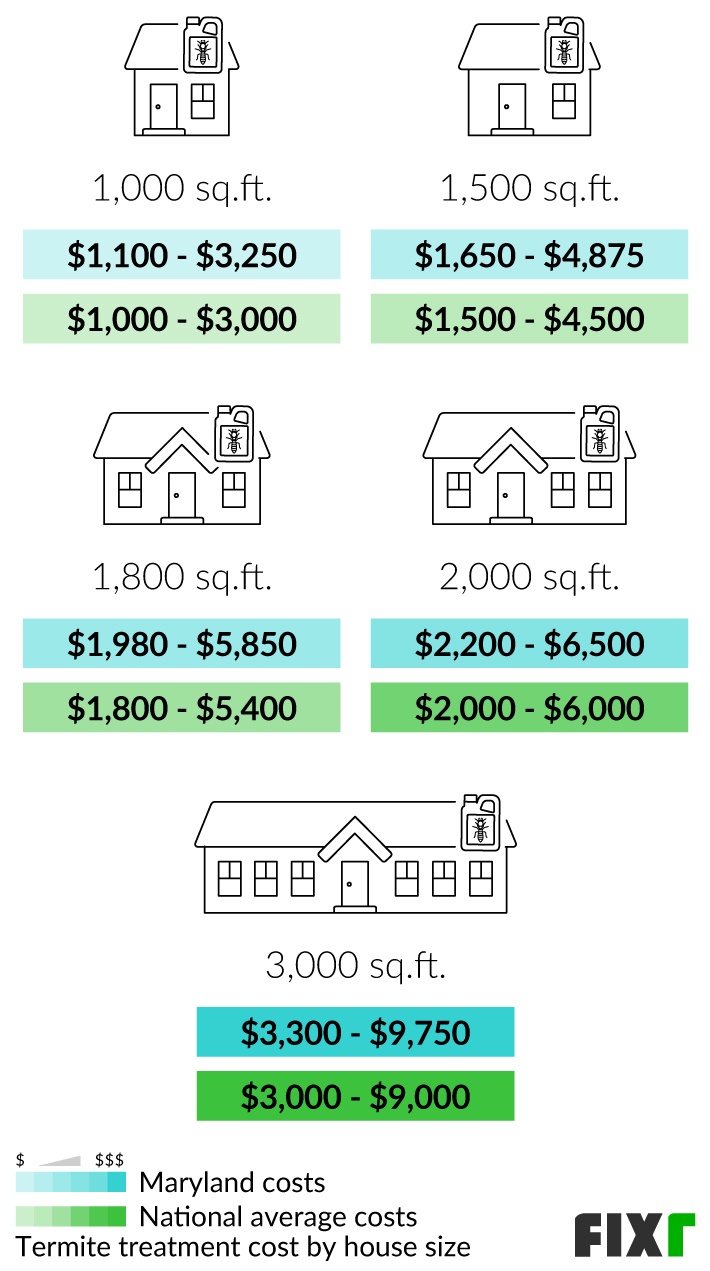 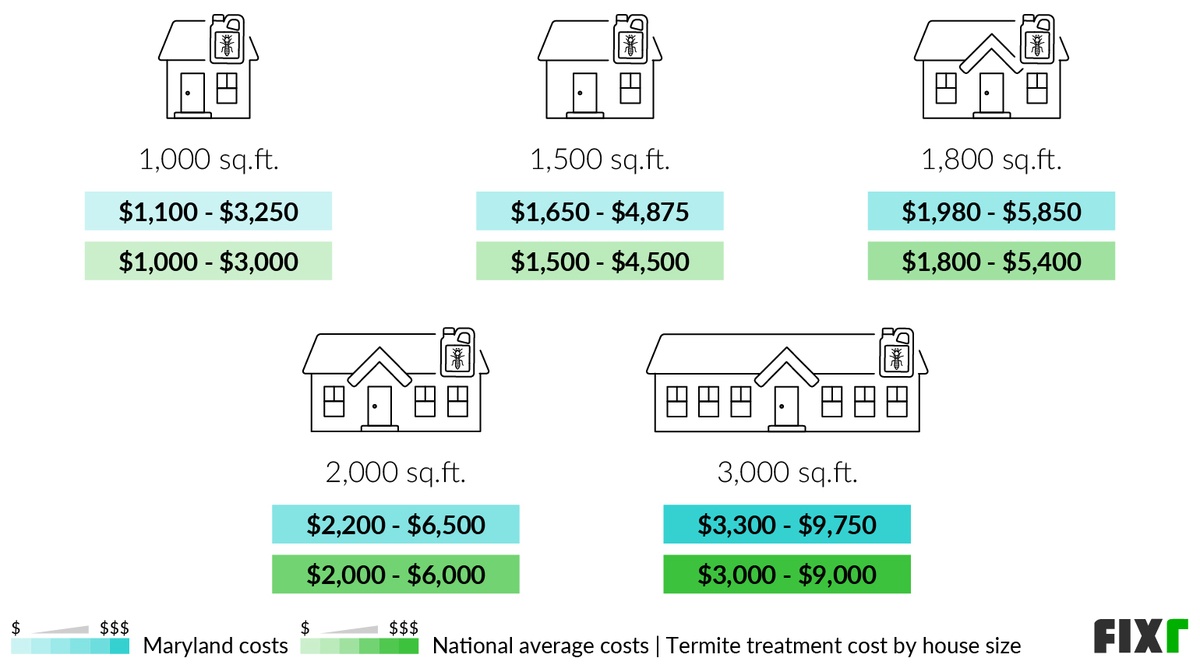 Cost for Termite Treatment in Maryland per Linear Foot

When fighting subterranean termites in Maryland, the most common type of termite, the cost ranges between $3.25 and $17.20 per linear foot. This is a little higher than the national average because of the higher cost of living in Maryland. Getting a linear foot measurement means measuring the length and width of the treatment area. In many cases, these figures are not just for the square feet in the home. Tentless treatments are often delivered in the yard because subterranean termites burrow underground and require treatment outside the home and under it. For 100 linear feet, Maryland homeowners might pay from $325 to $1,720. A small structure like a garage might require treatment of around 100 linear feet. For a large property or treatment of a significantly sized yard, a homeowner might expect to pay between $1,300 and $6,880 to treat 400 linear feet. It is worth noting that tenting a home where the work is priced according to square feet is often followed up with spot treatments or tentless applications with a price based on linear feet. 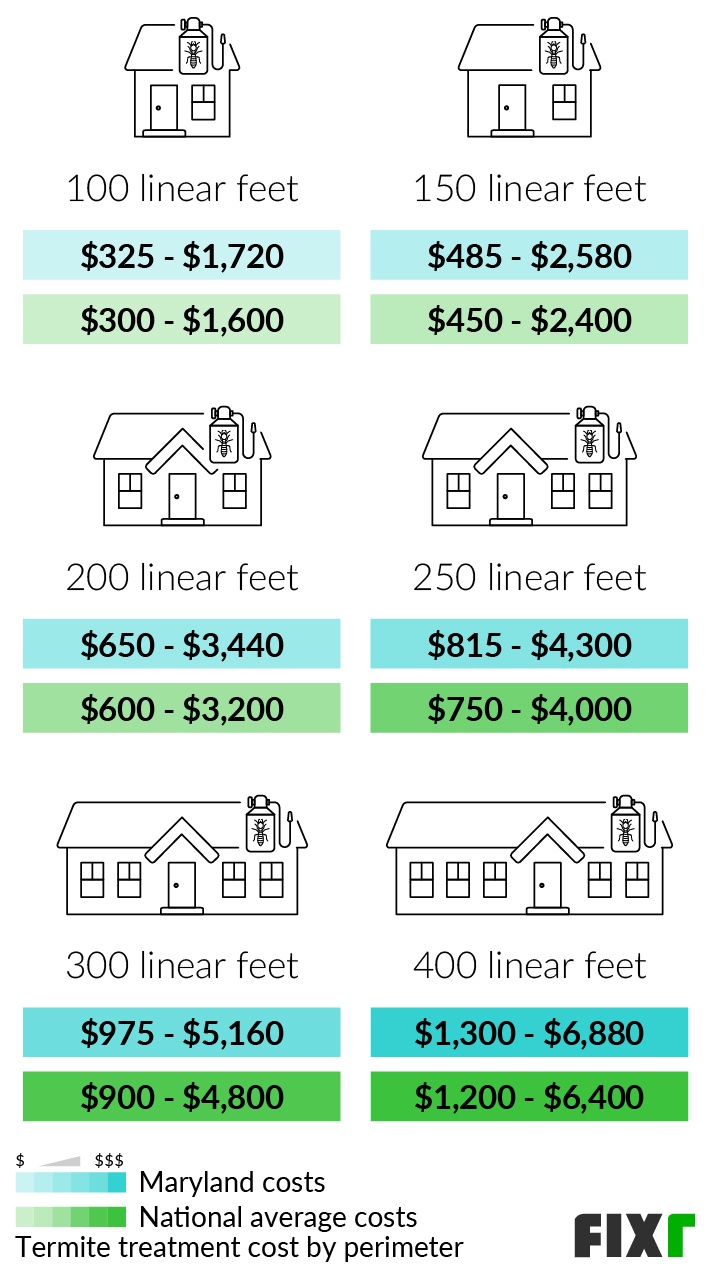 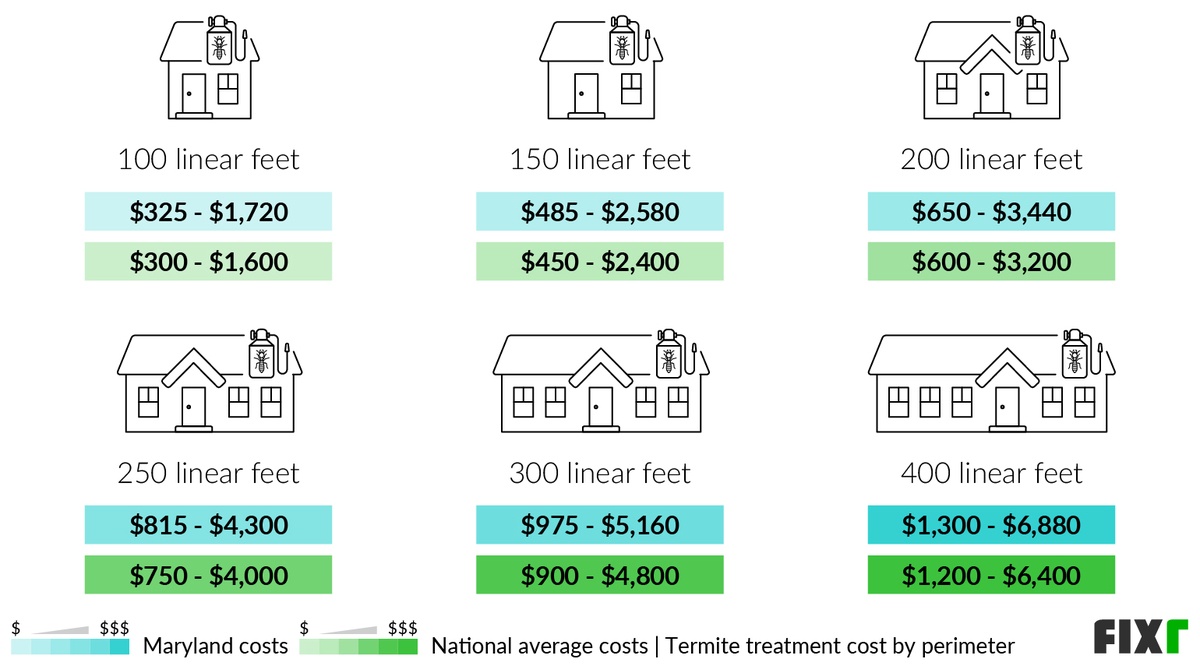 Termites often require multiple visits from an exterminator. Some homeowners in Maryland might find it useful to enroll in a termite contract program. A monthly contract costs between $710 and $965, but a single yearly visit should cost from $190 to $430. Treatment companies cannot eradicate subterranean termites with tenting, so repeated visits for tentless treatments are often required to eradicate the bugs. If an exterminator decides that the best way to fight the termites is repeated applications, the most affordable option is usually a termite contract. However, termite contracts are not required for treatment. It is always the homeowner’s choice whether to set up a contract. A one-time visit should cost between $210 and $515. 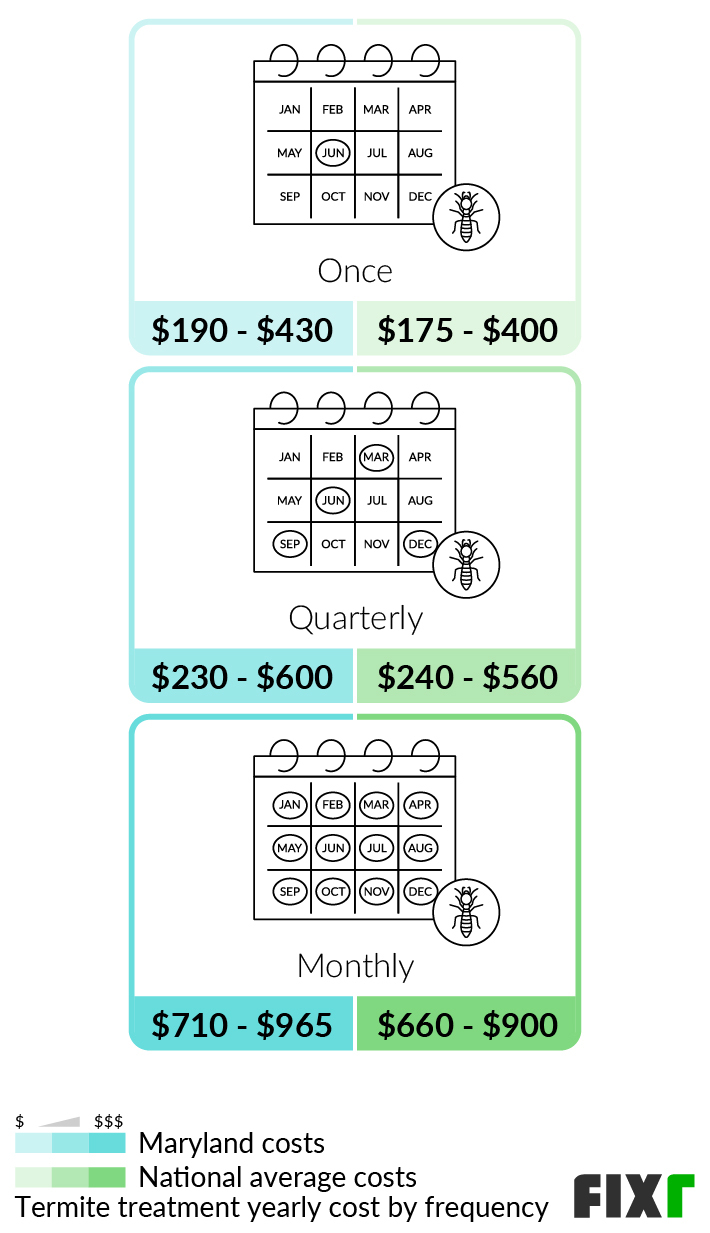 Not all infestations are the same size, and costs vary depending on how much product, time, and effort the exterminator must use to eradicate the termites. Costs for Maryland homeowners range from $265 to $1,290 for a small infestation where the exterminator might use spot treatments to eradicate drywood termites in the home or, more often, use treatments like bait traps to fight subterranean termites. When the infestation reaches a medium size and signs become more apparent, the cost increases to $430 to $1,615. 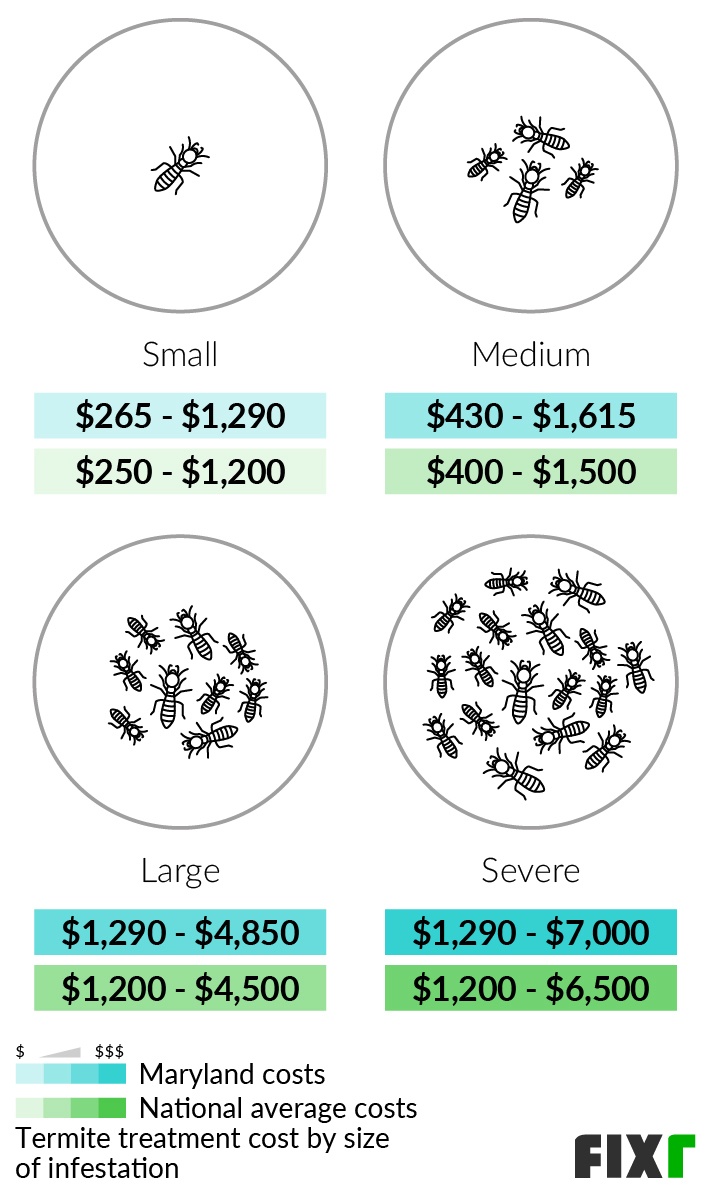 Termite Treatment Cost in Maryland by Type of Termite

Drywood termites are uncommon in Maryland, but it is still helpful to understand the costs involved in fighting them. There is no guarantee they will not start to attack homes more frequently in Maryland at some point as populations migrate. The cost to fight drywood termites varies between $1,080 and $7,000. The high cost to treat drywood termites is due to the frequency of the tenting treatments that are required to fight bad infestations. Maryland homeowners do not need to worry about dampwood termites because exterminators have not found any dampwood termite colonies in the state. 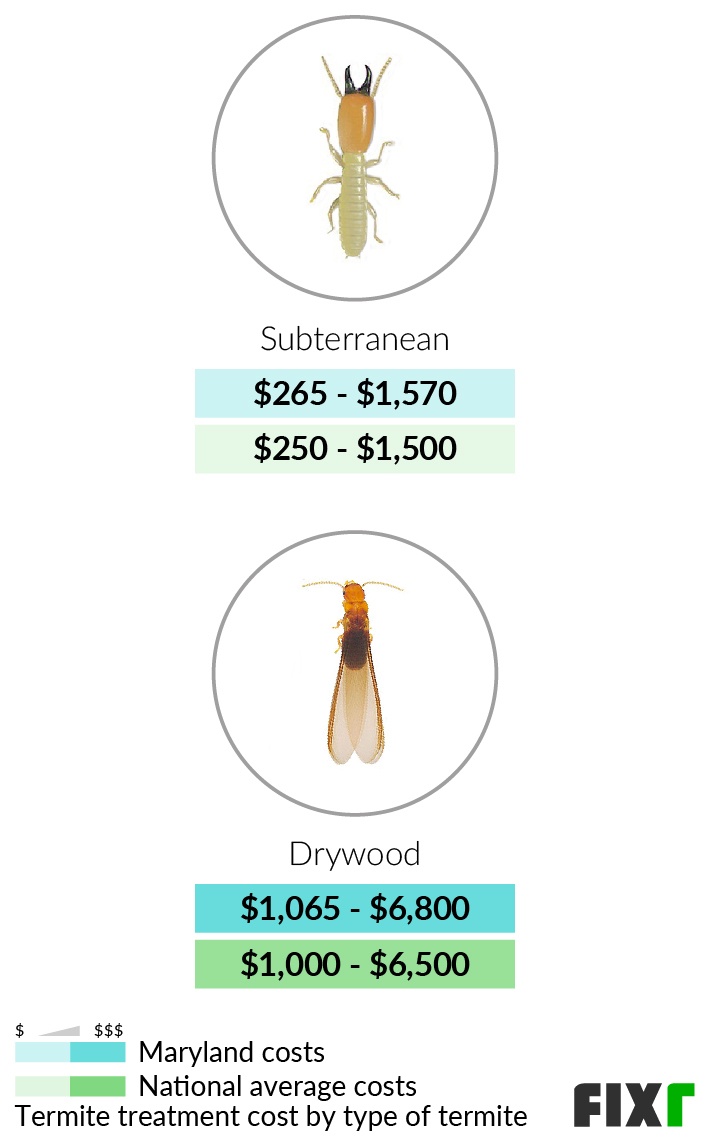 Homeowners might not notice a termite invasion until the problem is significantly advanced. A termite inspection from a professional might offer the best option for detecting termites early. Termite inspections usually cost between $100 and $200 for Maryland homeowners, but it is possible to get the fee waived by setting up a termite contract or agreeing to a treatment plan. Inspections are quite helpful because a small or new infestation is always much easier and less expensive to treat than worse infestations.

An inspection usually takes just a few hours. Some inspections may take even less time when the property is small. Treatment companies usually recommend that homeowners get an inspection at least once a year, particularly after receiving treatment, so the exterminator can confirm that termites have not returned. Inspections require the inspector to look in every nook and cranny of the property, including a look in the attic, basement, and all around the yard.

Signs of Termites in Maryland

One of the easiest ways to lower the cost of treating termites is to catch them early when their infestation is not far along. Costs rise dramatically as infestations get worse. The first signs of a termite infestation are hardly noticeable and may feature some discarded wings on the floor or around the property. Often, these wings appear during swarms in the warm months. When left alone, the small infestation can grow to a medium size where there might be some evidence of damage to the wooden parts of the home or property.

How Often Should You Treat Termites in Maryland?

The best time to treat termites is any time they are found. Waiting to treat termites may prove disastrous to the home and the homeowner’s bank account. Until termites are fully eradicated, monthly or quarterly treatments are recommended. Homeowners who receive a liquid barrier treatment designed to prevent future infestations should get about five years of protection. Yearly inspections are still recommended, just in case of a failure in the barrier.

Homeowners should consider quarterly visits if their exterminator places bait systems and yearly visits after tenting to ensure termites have not returned. Those yearly visits may or may not result in spot treatments being applied to the home, depending on whether termites are found. Note that termites are active all year long even though they only swarm and become visible in the warm months. Homeowners can treat their termite problem at any time of the year, even if it is winter or the weather is not cooperating.

How to Prevent Termites in Maryland

It is almost guaranteed that a homeowner will see termites on their property at one point or another. Whether as a small colony attacking a fencepost or as a huge infestation eating the foundation of a home, termites are everywhere in Maryland. To prevent termites, one of the best things a homeowner can do is keep a clean home. It is much easier to notice termites when there are no obstructions around areas like the baseboards in the home. Removing wood from the property is important because less wood means fewer termites looking for food. Try to eliminate rotting wood. Make sure any wood piles used for winter fireplaces are not stacked next to the home.

Get free estimates from termite treatment professionals in Maryland

A termite inspection in Maryland costs between $100 and $200. Sometimes, termite companies run specials on inspections, though, so it is helpful to call around to local companies to get the best price.

The cost of an exterminator varies greatly based on the type of treatment and the size of the infestation. However, the cost is between $325 and $1,300. The costs in Maryland are slightly higher than costs nationwide.

Maryland is home to many wood-destroying insects. Termites are the most common and destructive variety. As more and more homes are built, and neighborhoods push out into areas that were once wild, the number of homes impacted by termites increases.

Subterranean termites are quite common in Maryland. They are growing in numbers as they invade more and more homes. Protecting a home from termites is a good idea for homeowners who want to keep ahead of inevitable infestations.

When a termite inspection is completed before a home is sold, the inspection is paid for by the buyer. The seller will pay for treatment of any termites found, up to two percent of the purchase price of the home.

How much does it cost to get rid of termites in Maryland in my city?

Cost to get rid of termites in Maryland varies greatly by region (and even by zip code). To get free estimates from local contractors, please indicate yours. 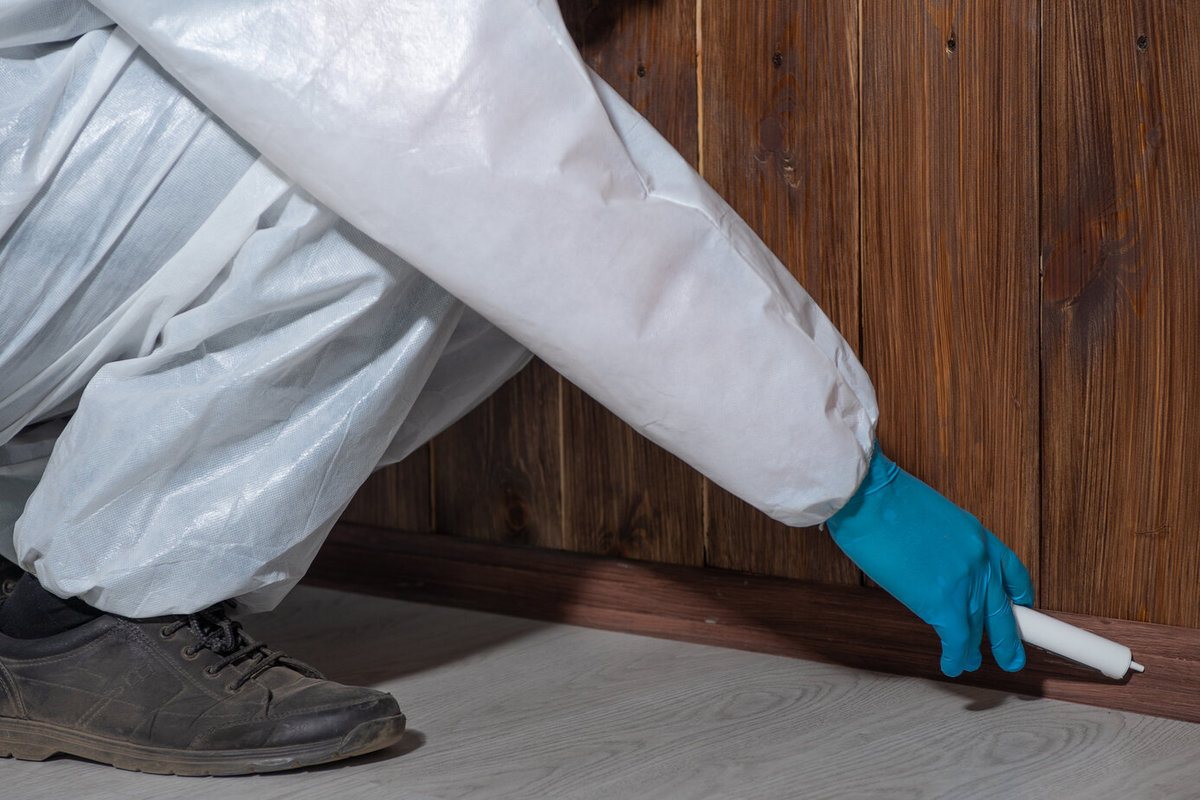