How Much Does Termite Treatment Cost in Phoenix?

National Average Range:
$320 - $1,260
Get free estimates from animal/pest control specialists near you

No homeowner wants to hear that their house has termites because they are such an incredibly destructive pest. Homeowners across the nation suffer billions of dollars of damage each year due to termite infestations. These virulent bugs wreak havoc in Phoenix, where many homeowners do not even realize they have termites until the problem is severe. Different types of termites exist in Arizona. Phoenix residents may see western drywood termites, desert dampwood termites, or desert subterranean termites attacking their homes.

Treating termites in Phoenix usually costs between $320 and $1,260 for a 2,500 sq.ft. residence. Costs in Arizona are a little higher than the national average. Homeowners in Phoenix pay a little more than the rest of the state, but not by a substantial amount. The average cost to treat termites in Phoenix is $540, which entails delivering a liquid treatment around a 2,500 sq.ft. house. Low-end costs for a basic inspection and a barrier treatment around a garage start at around $245. On the more expensive side, tenting a house with a heat treatment and applying barrier treatments to a 2,500 sq.ft. house costs approximately $6,800.

Cost of Termite Treatment in Phoenix

Tent vs No Tent Termite Treatment Cost in Phoenix

There’s more than one way to kill a termite, and modern pest control services have many methods at their disposal for treating Phoenix homes. Treatments are divided into two categories called tent treatments and tentless treatments. Tenting a home for termites requires enclosing the entire home in a giant tent. Tenting treatment then involves heating the home to kill the termites or sending chemicals into the house to kill them. Nationwide, tenting costs around $1 to $3 per sq.ft. In Phoenix, costs range from $1.05 to $3.10 per sq.ft. Tenting is fairly rare in Phoenix, however, because drywood termites, the main focus for tenting, are uncommon in Arizona.

Phoenix homeowners are much more likely to see their termite exterminator use one of several available tentless treatments, effectively treat subterranean termites that live underground and invade homes through the foundation. Costs for tentless treatments vary from $3.10 to $16.75 per linear foot, which is just above the national average of $3 to $16 per linear foot. To fight subterranean termites, the exterminator might use bait traps and deliver liquid treatments into the soil around the foundation. 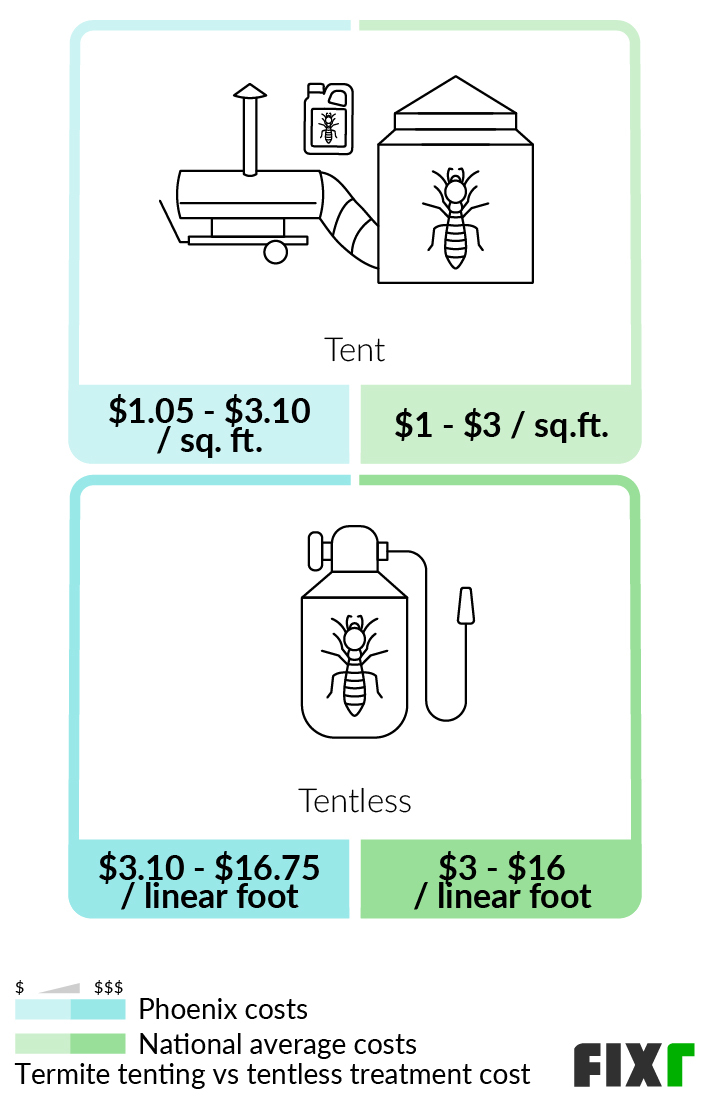 Treatment costs are based on the size of the home or treatment area. Treatments start at approximately $1,050 for a 1,000 sq.ft. house and increase to a high of $9,300 for a 3,000 sq.ft. house. Costs are based on the average range of $1.05 to $3.10 per sq.ft. Houses in Phoenix are larger, with the average home in Phoenix reaching more than 1,800 sq.ft., one of the largest averages of any city in the nation. The chart below indicates what you might pay per square foot for your termite treatment should your home become infested with drywood termites and require tenting. 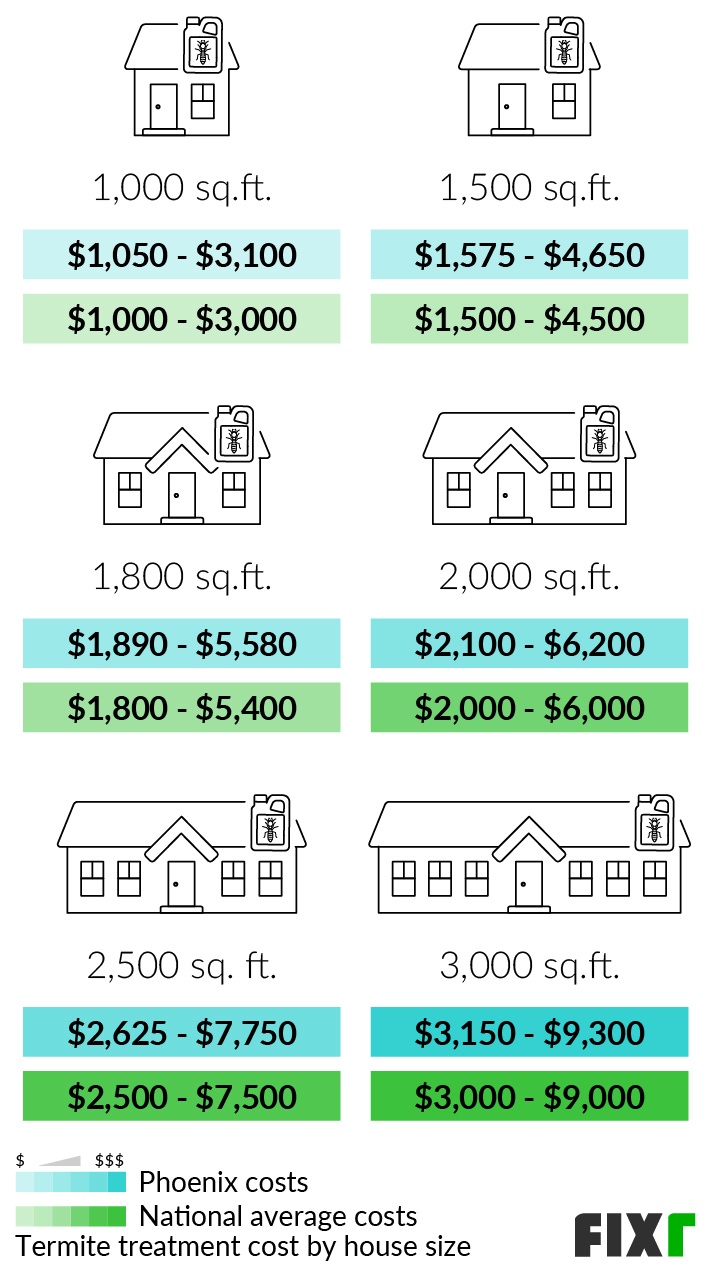 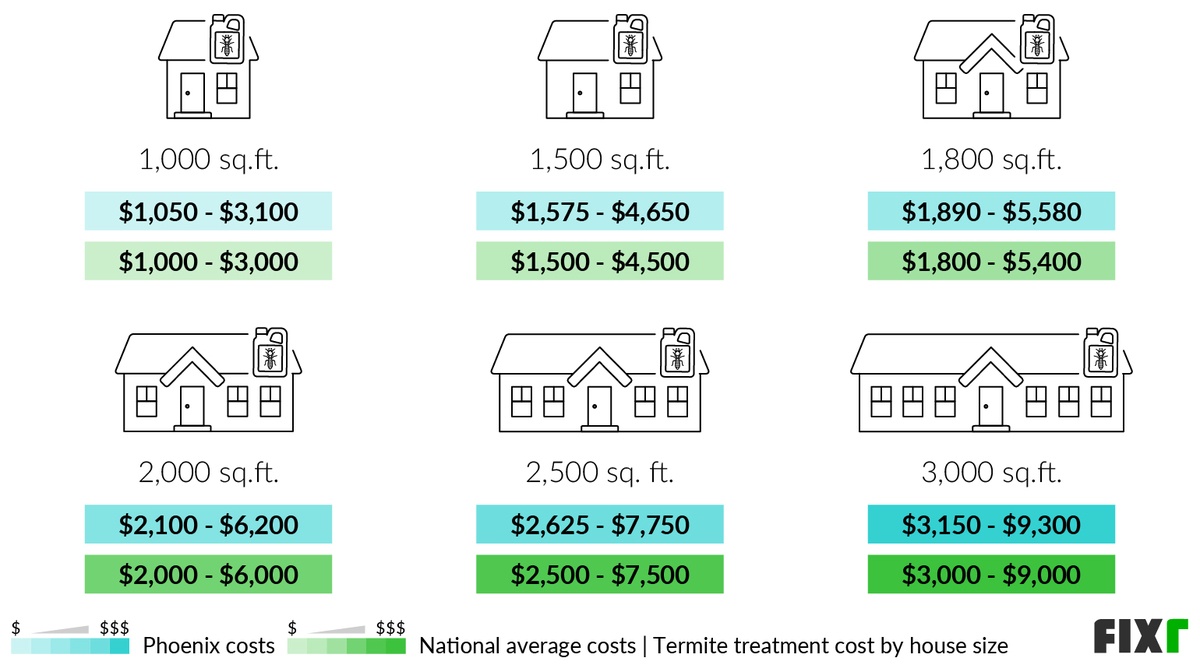 Fighting subterranean termites requires tentless treatments and ranges from $3.10 to $16.75 per linear foot in Phoenix. A linear foot is a measurement of length and width. Costs start at $310 for 100 linear feet and increase to a high of $6,700 for 400 linear feet. Costs in Phoenix are marginally higher than the rest of the state due to a higher cost of living. Phoenix has some of the largest lots in the nation, meaning homeowners must remain on guard for the significant threat of subterranean termites making homes under the ground. Since most Phoenix termite infestations are subterranean, homeowners must look for more than just their house when searching for termite activity. 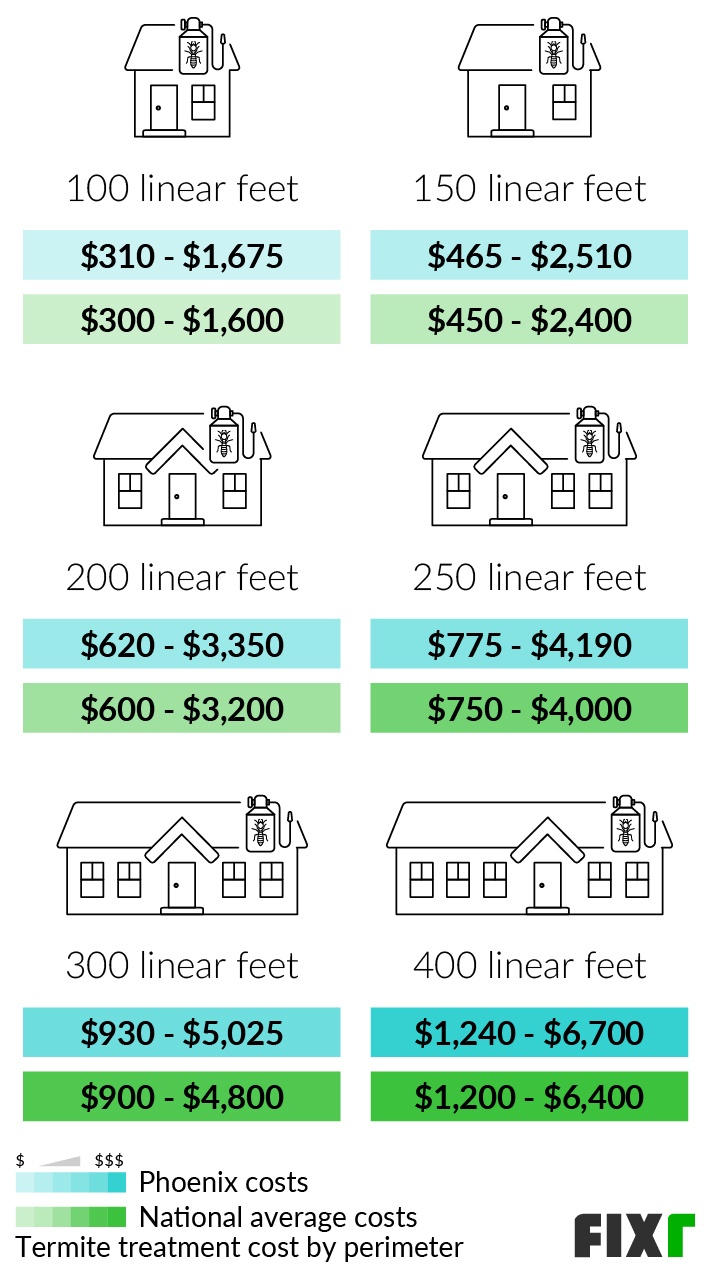 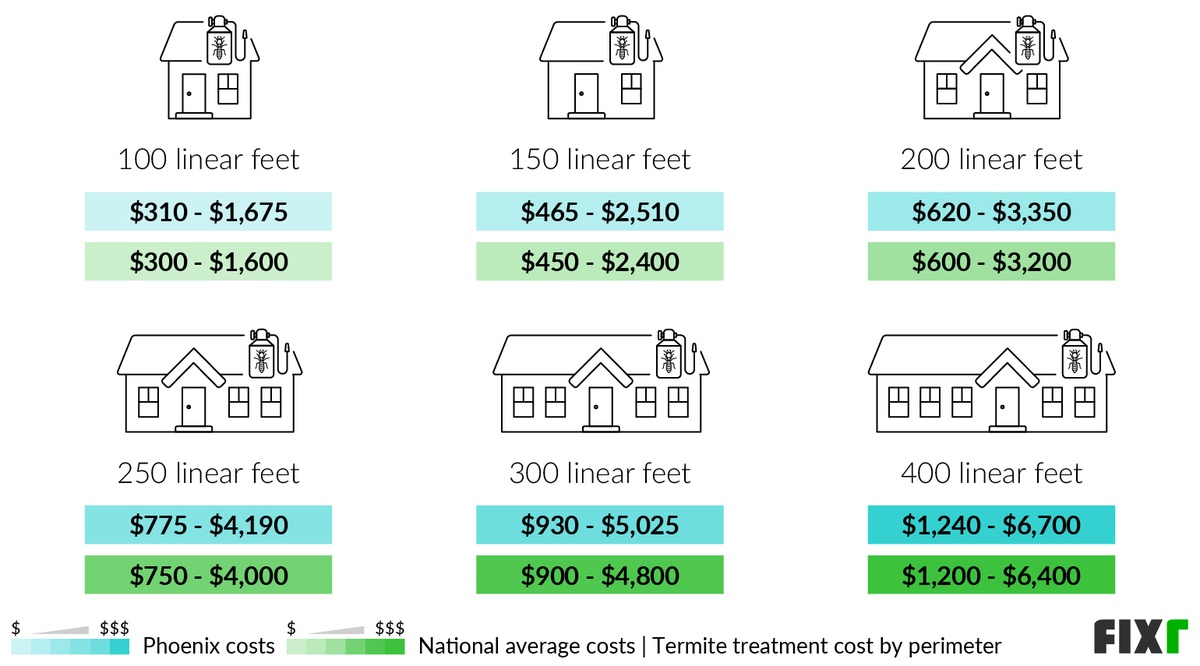 Average Cost of Termite Treatment in Phoenix by Frequency

Termites are a constant threat to homeowners in Phoenix. Some owners may find signing up for a termite contract helpful. Costs start at $185 for a yearly visit, $255 for a quarterly visit, and $690 for a monthly visit. Signing up reduces overall costs for repeat visits and offers peace of mind that treatments are effective. Some treatments work best when applied repeatedly over time. For example, a quarterly contract helps homeowners keep up with bait traps. Monthly visits help with spot treatments that prevent new colonies. However, homeowners are not required to select a contract when working with an exterminator. A one-time visit costs $215 to $505. 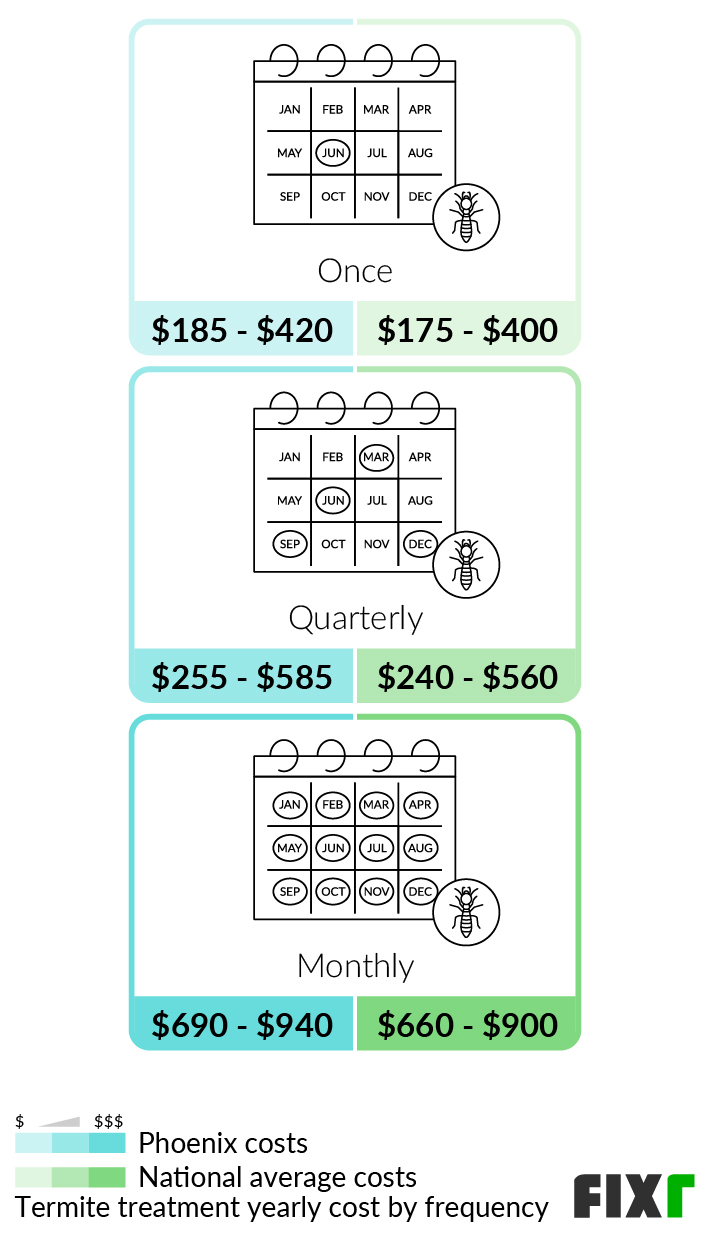 Get free estimates from termite treatment professionals in Phoenix

Termite Treatment Cost in Phoenix by Severity of Infestation

A small infestation for a Phoenix homeowner costs just $265 to treat. However, a severe infestation costs up to $6,790 to eradicate. Unfortunately, many homeowners have no idea they have an infestation until the colony is very advanced and has started its destructive path through the home. However, termite companies have the tools to fight any size infestation. Costs for subterranean termite removal become exponentially more expensive because of the destructive power of a large colony and the speed at which they multiply.

Subterranean termite colonies may have many thousands of individuals. The large property sizes of many Phoenix homes mean that homeowners must be on their guard against these subterranean travelers. It is not just under the house where a huge infestation may occur. Homeowners can avoid damage to their homes by making sure to get termites treated quickly when evidence of a colony is found. In the rare chance a homeowner has drywood termites, the chance of a large or severe infestation is slim because their colonies do not grow rapidly. However, it is still important to treat small and medium drywood termite colonies quickly. 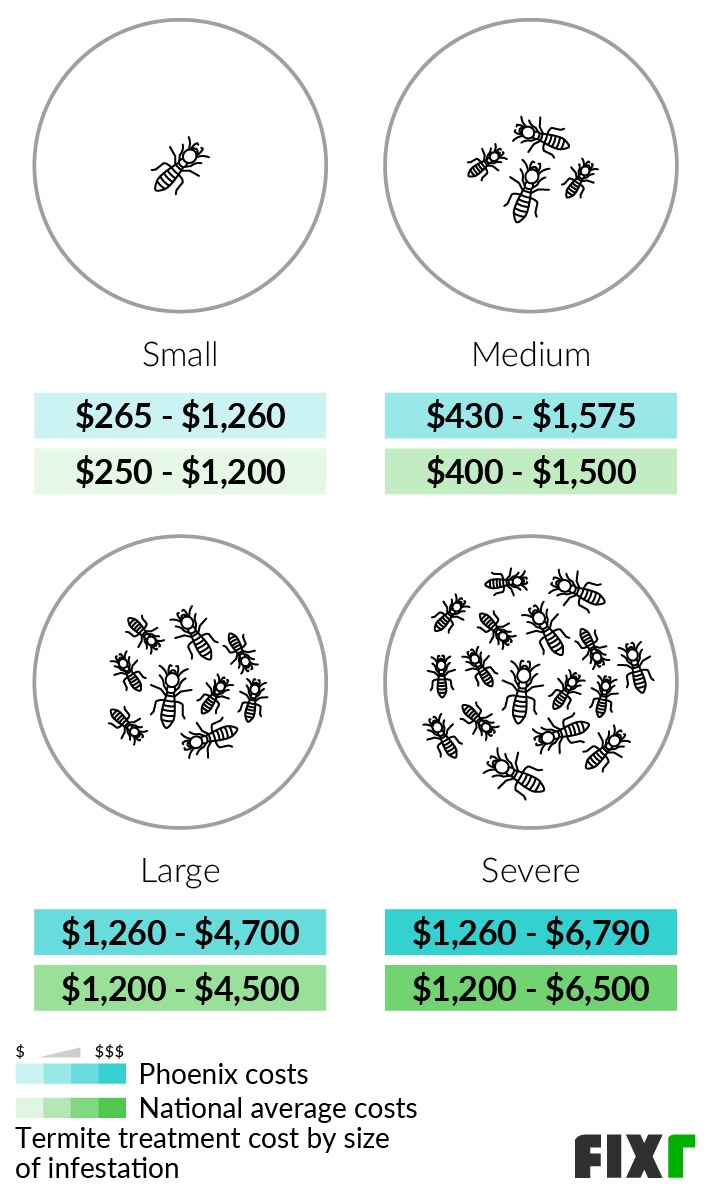 Cost of Termite Treatment in Phoenix by Type of Termite

In rare cases, homeowners may come into contact with the desert dampwood termite. These termites often invade structures like old, wooden homes, decaying plant matter, dying trees, and wooden fences. Exterminators use a spot treatment for dampwood termites costing between $85 and $520. Exterminators commonly use perimeter sprays. Removing decaying wood from the property is important because it is a termite food source. 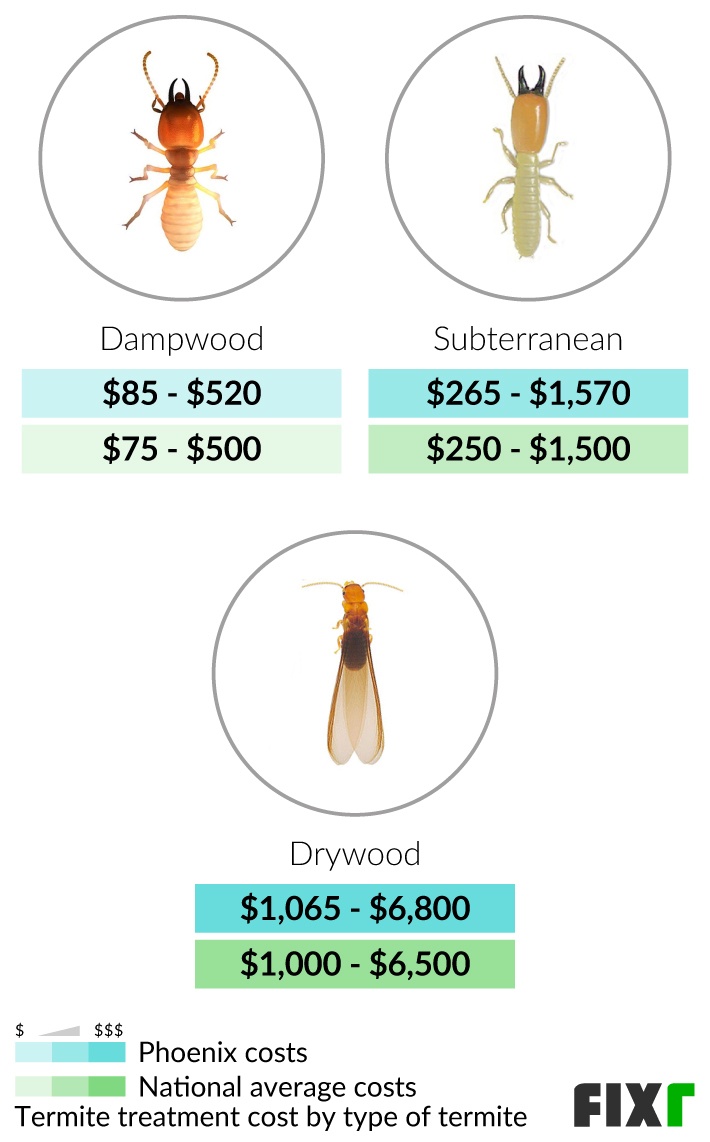 Most termite exterminators recommend that vulnerable homeowners get termite inspections at least once a year. Catching a termite infestation early reduces costs by several thousand dollars, so it is well worth the price tag of $50 to $150 for a yearly inspection. This cost does not include any other services and is just an inspection of the property. Some contracts feature inspections as part of the service package. Homeowners who know they want a contract may not need to get an initial inspection. It is virtually inevitable that a Phoenix home will get termites at some point, so homeowners might as well try to catch them at their earliest stage. Some companies waive the cost of an inspection for homeowners signing up for a contract or arranging for a treatment session.

During an inspection, the inspector searches the interior and exterior of the home for evidence of termites. Homeowners with extensive property with decaying wood might receive a recommendation to remove the wood to avoid a future infestation. The inspector looks for evidence like mud tubes for subterranean termites. When drywood termites are suspected, the inspector looks for holes in the wooden parts of the house and dead termites or wood shavings around the baseboards.

How to Prevent Termites in Phoenix

Preventing termites before they invade or after they are treated is important because it is not just the cost of the treatment that may become expensive. Termites destroy homes. Preventing their arrival or return is the best way to keep the home structurally sound and the family safe. Some simple termite prevention tasks include removing old or decaying wood from the property and keeping the home clean. Valuable soil and wood pre-treatments are available for homes still under construction. Further, some home upgrades or modifications invite termites, like irrigation tubes installed too close to the home and soil grading that allows moisture to accumulate close to the foundation.

Compare prices from termite extermination companies near me

Most termite infestations in Phoenix are subterranean termites, requiring treatments in the ground and around the foundation of the home. Some homeowners may need their homes tented when they have an infestation of drywood termites.

Research suggests an acre of land may hold up to 3 million termites. They can burrow down to 20 feet below the surface. With enough time, experts believe every home in Phoenix will eventually have termites, so prevention and awareness are essential.

Homeowners should not rely on animals and bugs to eat and eradicate termites in the home (that’s best handled by an exterminator). However, some Phoenix animals and insects like to eat termites. They include moles, armadillos, ants, and spiders.

Termites are definitely a problem in Phoenix. Not only are termites endemic to the region, but urban sprawl into desert areas already inhabited by termites means homes are always in significant danger of termite infestation.

How much does it cost to get rid of termites in Phoenix in my city?

Cost to get rid of termites in Phoenix varies greatly by region (and even by zip code). To get free estimates from local contractors, please indicate yours. 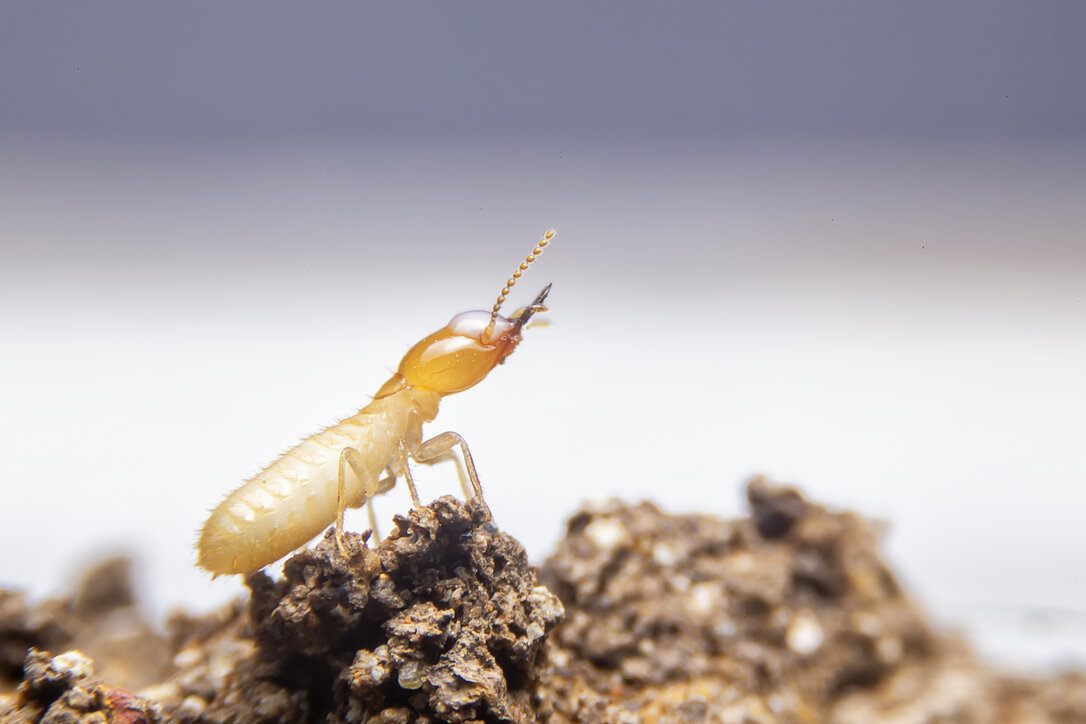