How Much Does It Cost to Build a House in Massachusetts?

Cost to Build a House in Massachusetts

Build a House in Massachusetts Cost by Project Range

Average Cost of Building a House in MA by Type

Homes in Massachusetts can be built using two methods. The first is the most traditional form, called stick-building, where your home is built on the site. This method is more expensive and takes longer but allows for flexibility, with the ability to change things as the project progresses. However, many homeowners turn to modular building due to the high cost of building in Mass. Modular building constructs most of the home off-site in a controlled environment, and then transports it to the jobsite for final construction and finishing. This makes the project faster and less expensive, but you cannot make changes once construction begins. Modular homes are generally constructed with more material than stick-built homes, making them very durable.

Both methods are equally common in the state. The closer you are to Boston and other big cities, the more common modular building becomes as the cost of building rises. The farther west you are, the more common stick-building becomes because there are fewer modular buildings in this part. Both methods allow you to use a readymade plan or have a custom or semi-custom home built. This means both methods have a wide range of costs, depending on the plan, materials, and home. Custom homes of both methods are more expensive than non-custom homes. Below are the average costs per square foot to build a home in Massachusetts using both methods. 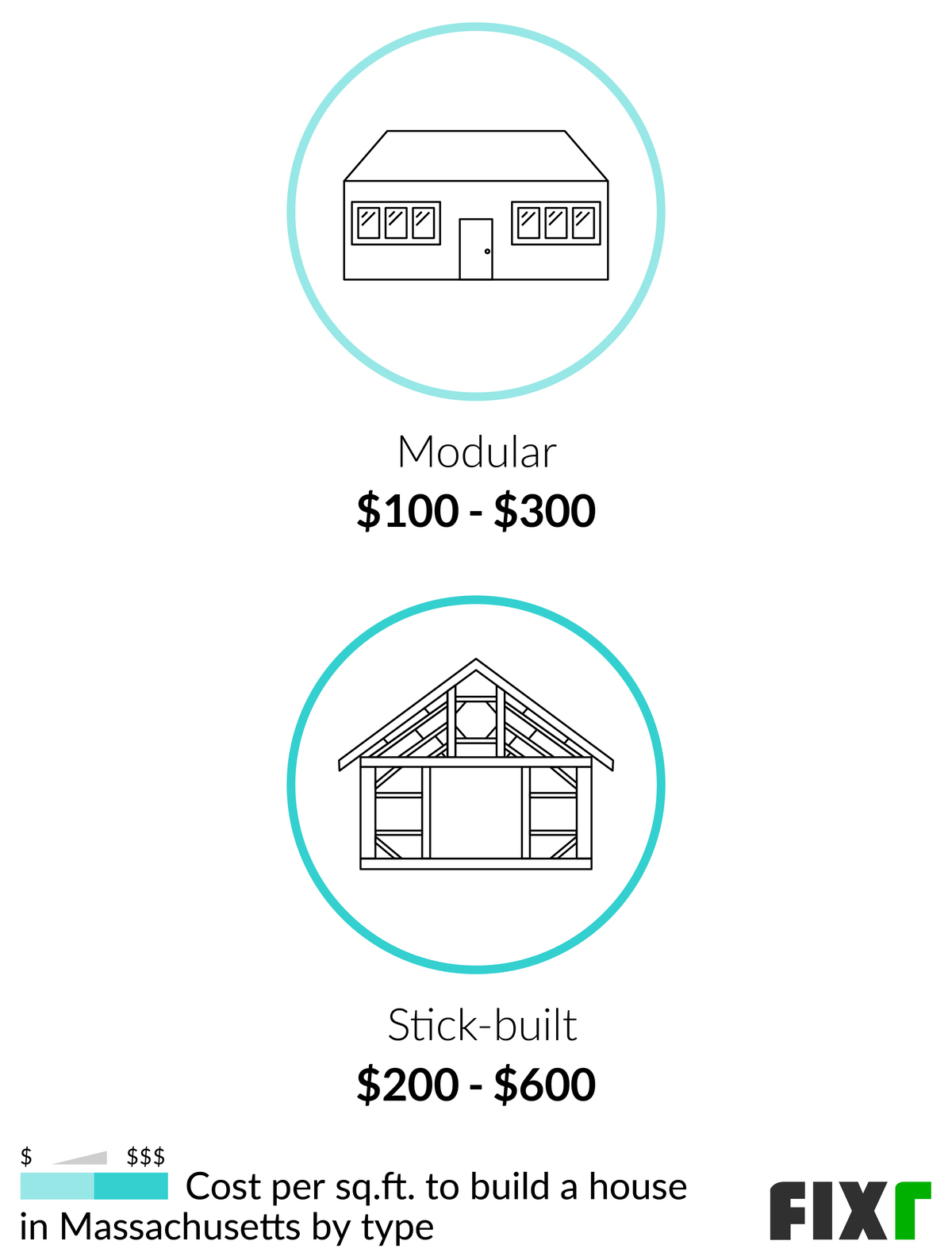 Cost per Square Foot to Build a House in Massachusetts

There is a range of costs associated with building a home in Massachusetts, depending on the construction type, whether the home is custom, and building materials. The total cost range per square foot is $100 to $600, with most spending $260 per sq.ft. in the state. Prefab modular homes can be built for $100 per sq.ft., while fully custom stick-built homes using high-end materials are as much as $600 per sq.ft.

New homes in Massachusetts average 2,000 to 3,000 sq.ft. However, a smaller home may be the right fit in many parts of the state. The state has many ranches, Cape Cods, and gambrels that are only 1,000 to 1,500 sq.ft. Some people in the state are opting for smaller custom homes rather than larger standard homes because of the high building costs. Below are the average costs to build a home in Massachusetts based on the size using modular and stick-building techniques. 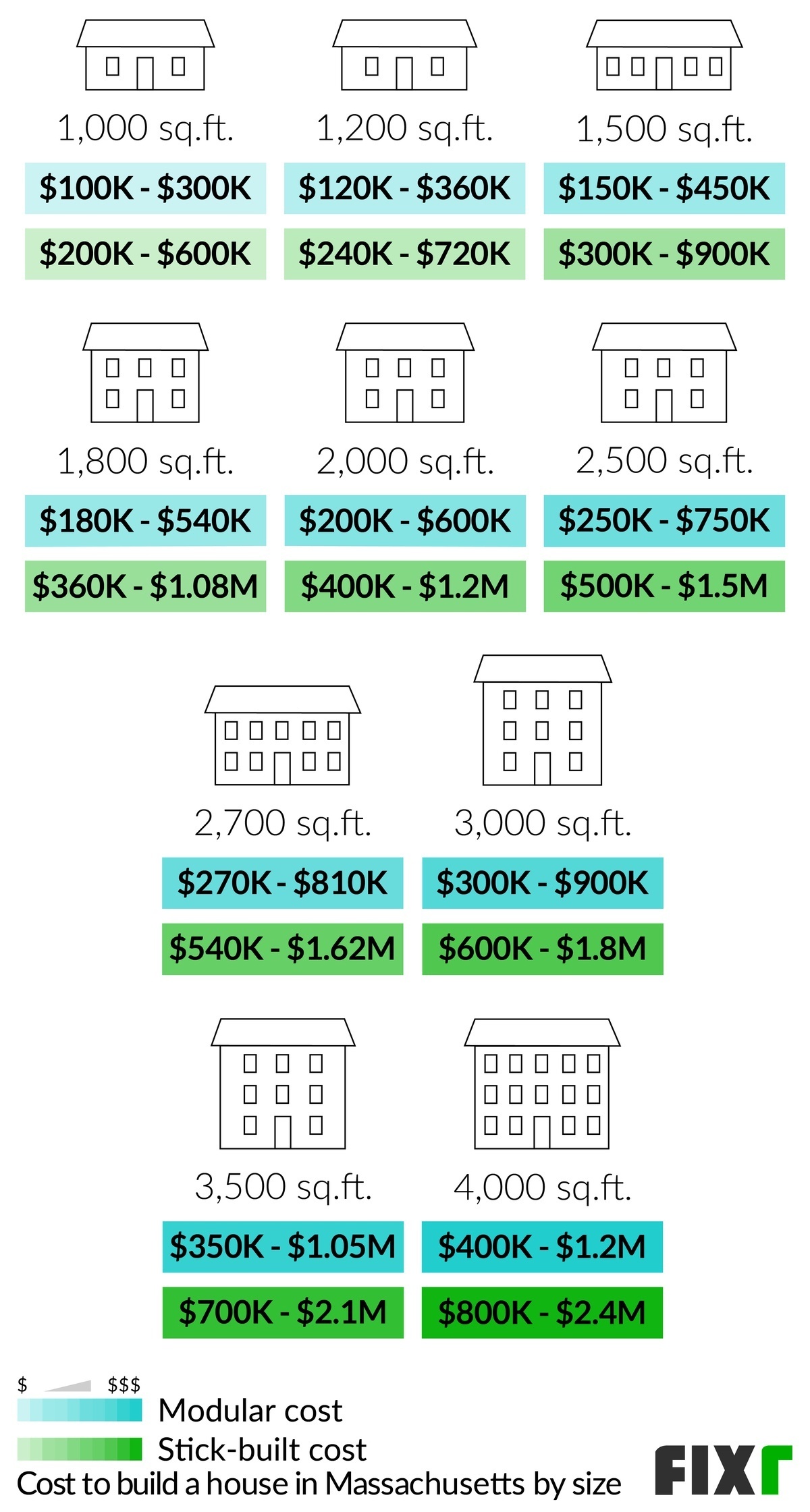 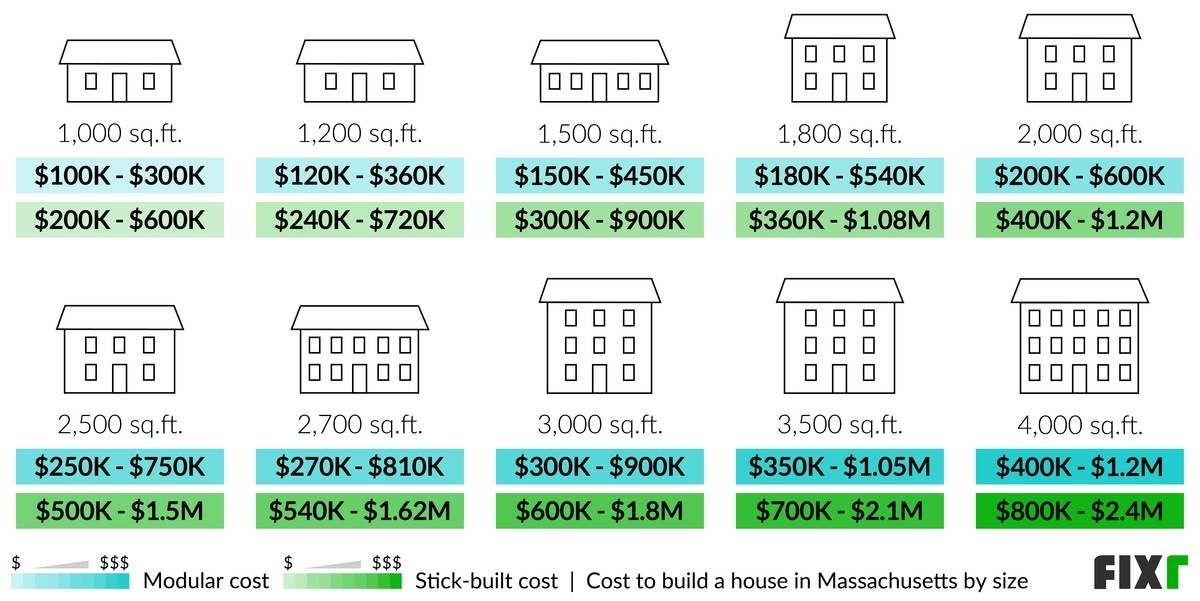 Cost to Build a Home in Massachusetts by Number of Bedrooms

Most new homes built in Massachusetts have three to four bedrooms. However, many homes are built with two bedrooms in the state. Single-bedroom homes in Massachusetts are less common but can be found, particularly in small urban homes and rustic cabins.

While homes of many sizes can have varying numbers of bedrooms, it is common that larger homes have more bedrooms than smaller homes. However, there can be much overlap in sizes, depending on the layout and how the space is used. This can lead to overlapping costs. Below are the average costs to build a home in Massachusetts by the number of bedrooms using both building methods. 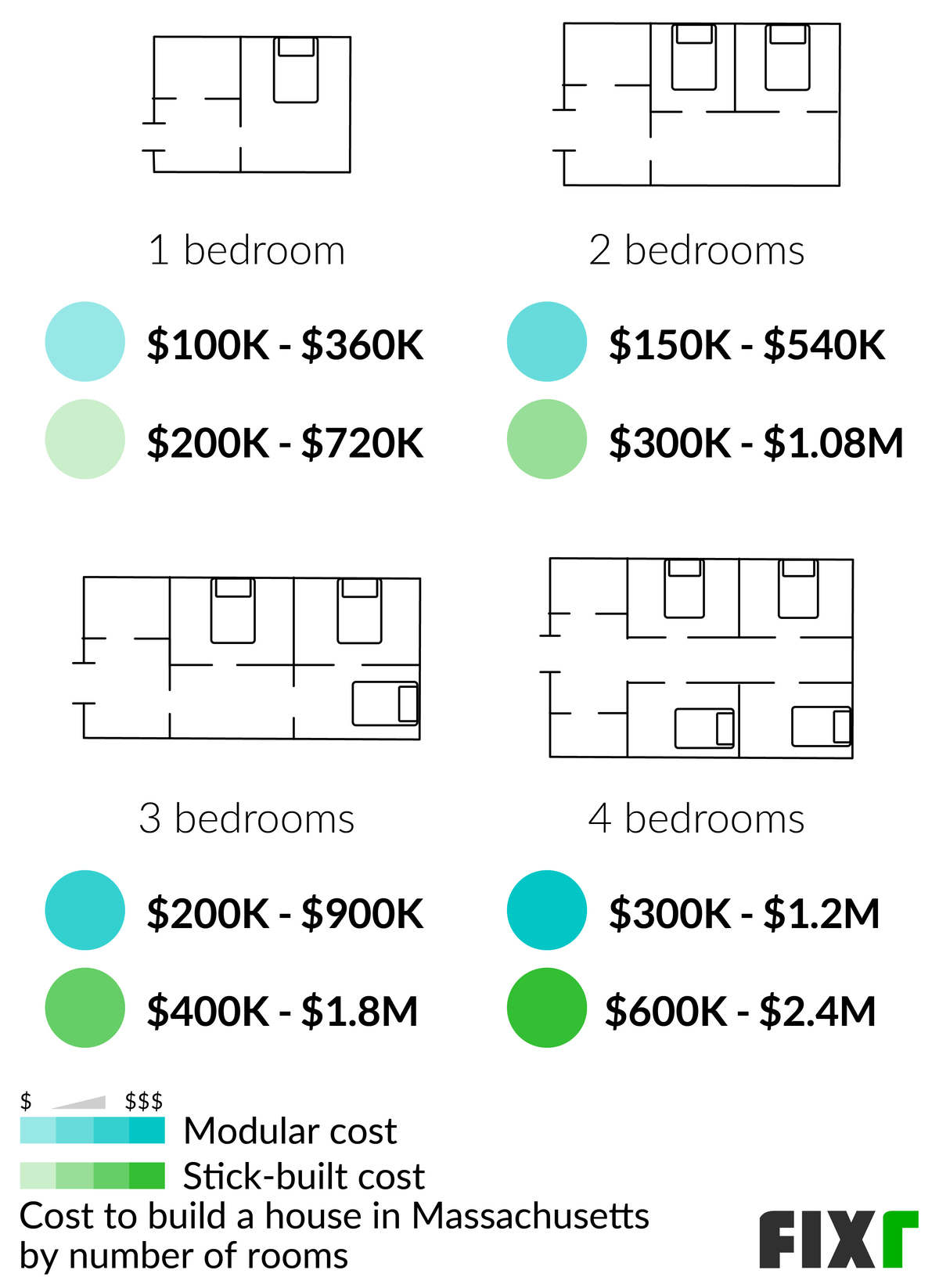 Most homes built today in Massachusetts have two stories. However, ranches are a popular home style in the state, and most only have one story, but some large Federal colonials have three stories. The larger the home, the more likely it is to have two or three stories. This is because the cost to build tends to be higher for homes with larger footprints than for homes with smaller footprints because the foundation and roof are two of the highest costs. This means a 2,000 sq.ft. single-story home and a 2,000 sq.ft. two-story home have different building costs, with the single-story home costing more. Most people who want more square footage build up rather than out, so most single-story homes have a lower cost than two or three-story homes because they are smaller. Below are the average costs to build homes of one, two, or three stories in Massachusetts, using both building methods. 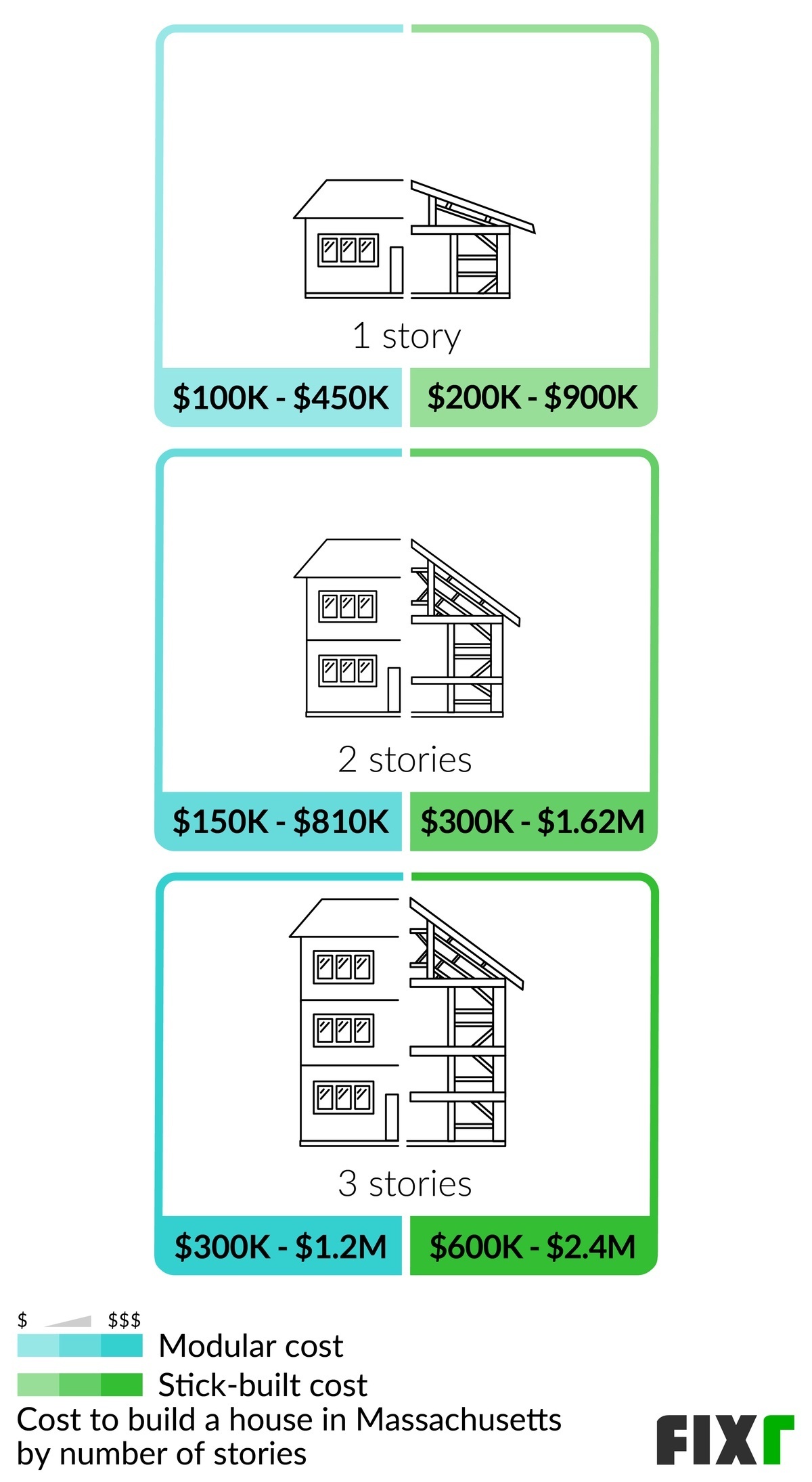 Building a House in Massachusetts Cost by Style

There are many popular home styles in Massachusetts. The most popular within the state is the colonial. The colonial was introduced to the state centuries ago, and all variations, from Dutch to Federal, have remained popular ever since. The modern colonial is currently the most common home in the state. However, other homes can be found throughout the commonwealth, including Capes, ranches, bungalows, Victorians, and gambrels. Split-level homes are also popular because they can be built partially into a hill or underground, so hilly terrain is not an issue. You may see some contemporary homes if you live near Boston or out west, and you can find beach homes on the Cape or the South Shore near Cochituate, Hull, and Situate. Tiny homes can be found in some parts of the state, particularly in the western region. Each home has costs to build, depending on the size, layout, and level of detail. For example, Victorians tend to be more expensive because they have gingerbread and other details, while Capes and ranches are plainer. Below are the average costs to build each home style in Massachusetts using both building methods, based on the average size of each style. 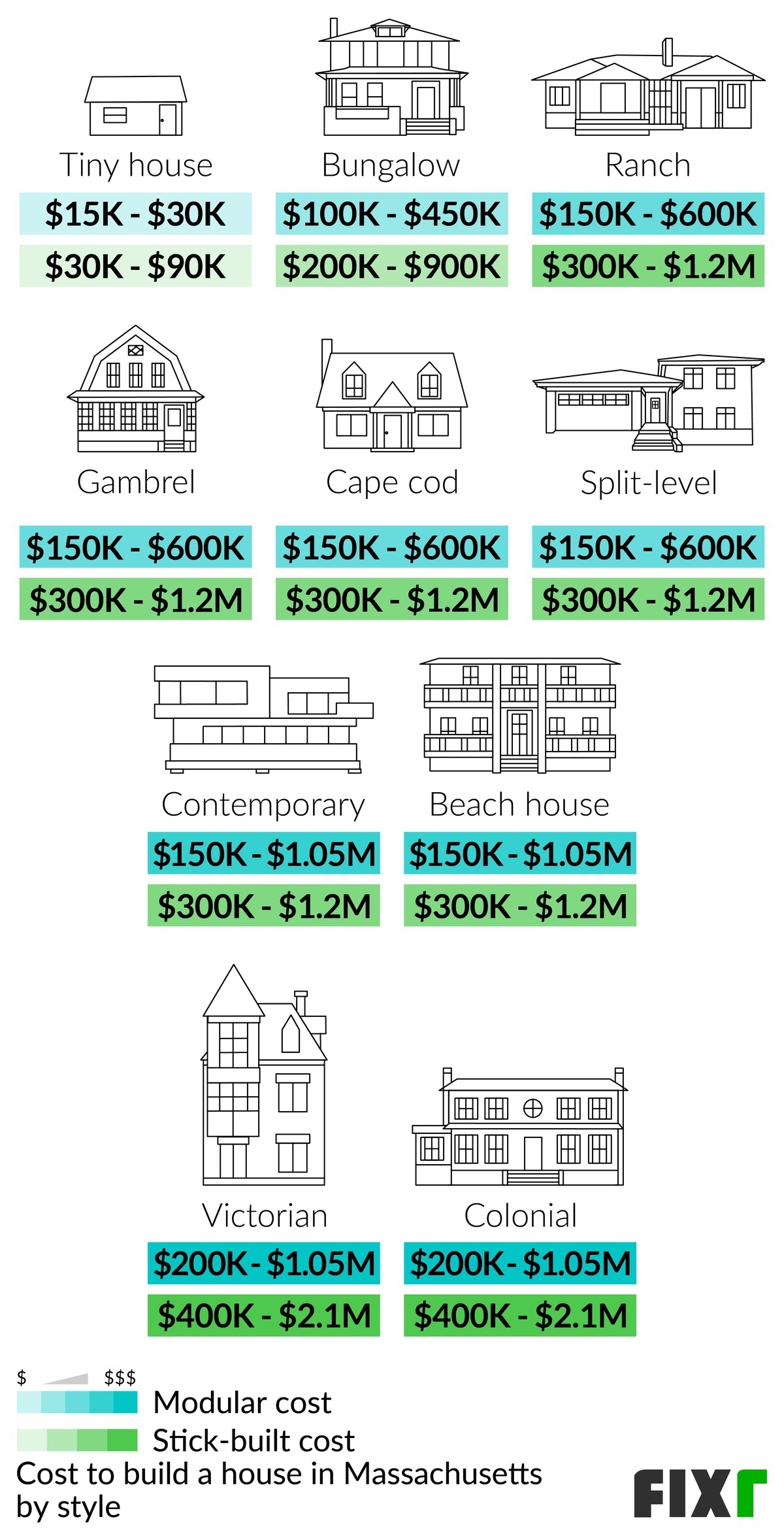 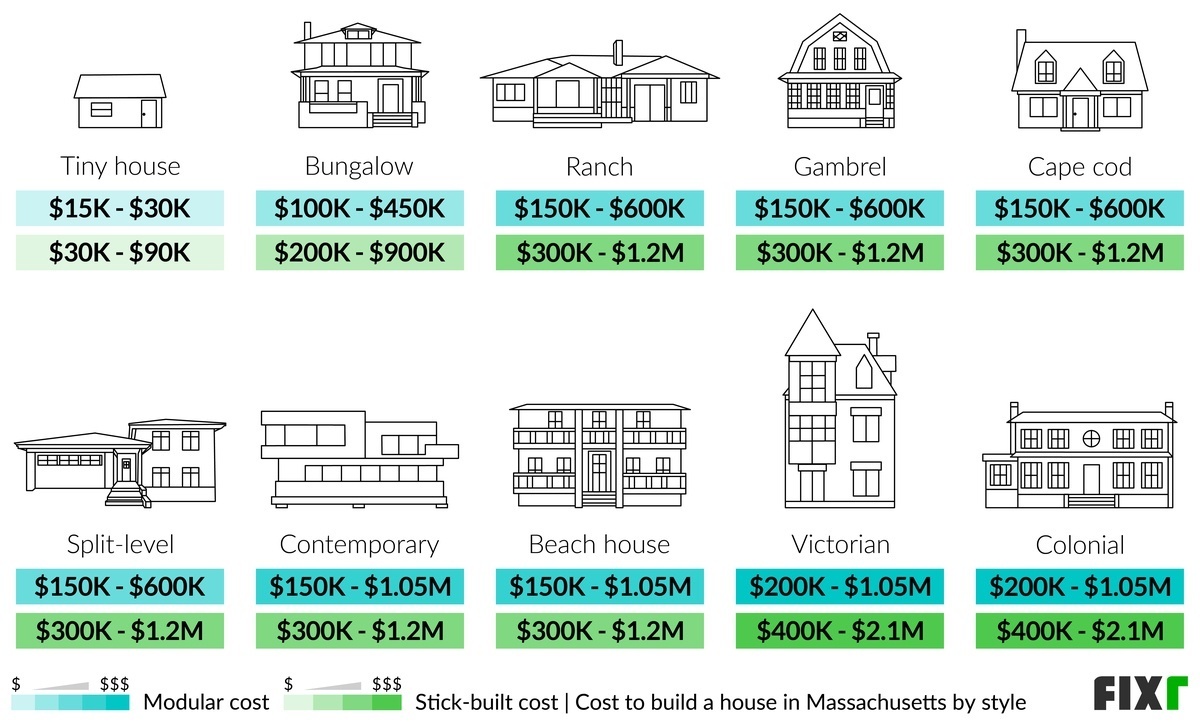 Building a home is a big undertaking. Each new home needs several components to come together before, during, and after construction to complete the job. This is also true in Massachusetts, where building codes tend to be slightly stricter than in surrounding states. Because of added costs for permits, inspections, and the requirements of certain materials to be used on all homes, you may see different cost breakdowns for homes in this state than the national average. Every home may be slightly different in material, style, and construction, so your costs to build a home can vary overall and within each category.

While every home is different, most require certain steps and areas of construction. This begins with the prep work, including permits, land clearing, and drawings, moves onto the foundation, framing, roofing, major system installations, such as plumbing, electrical, and HVAC, and exterior and interior finishing. Below are the average costs entailed in building a 2,500 sq.ft. home in Massachusetts using stick-building methods. Because modular homes are built differently, they have different costs. 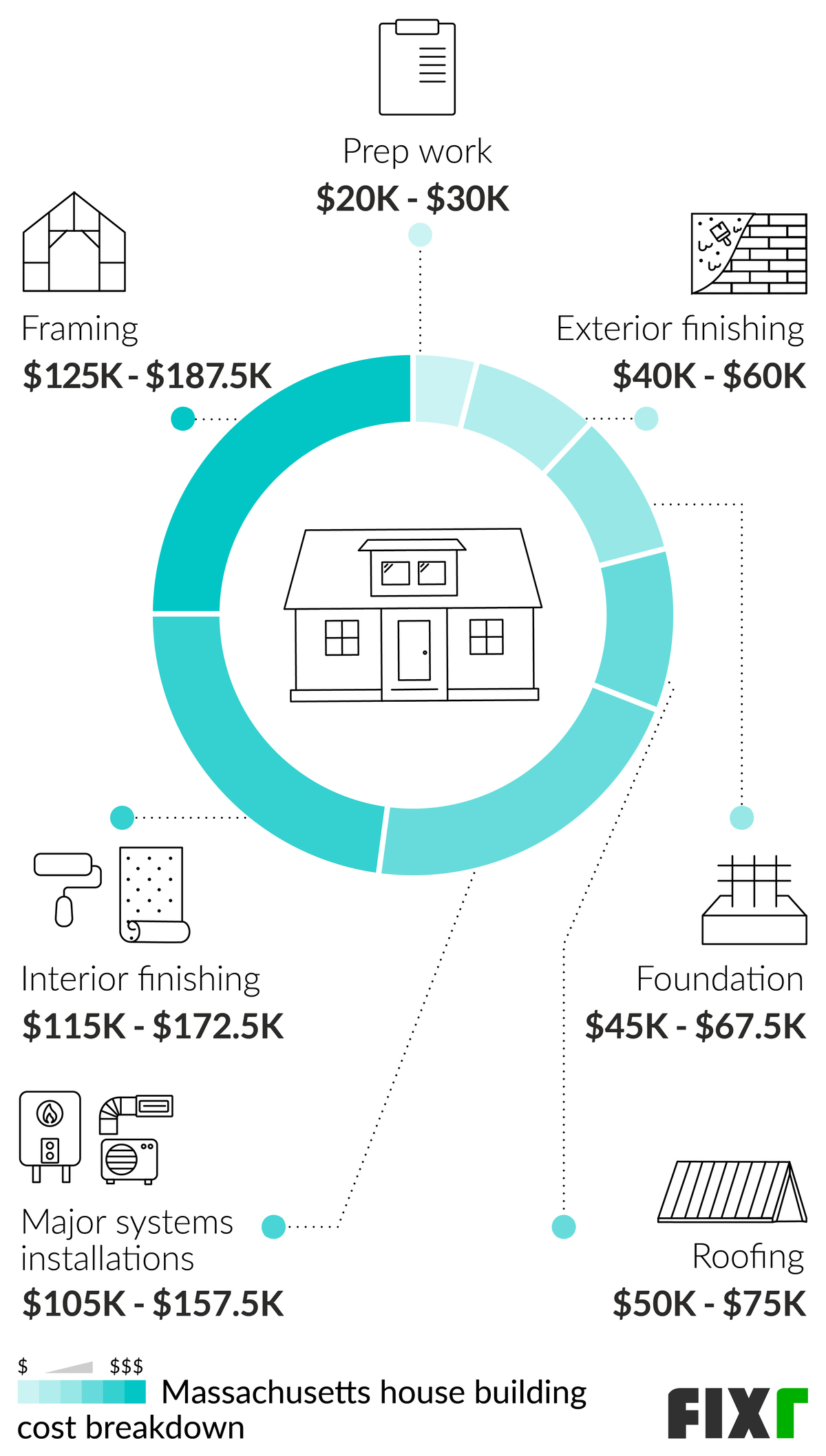 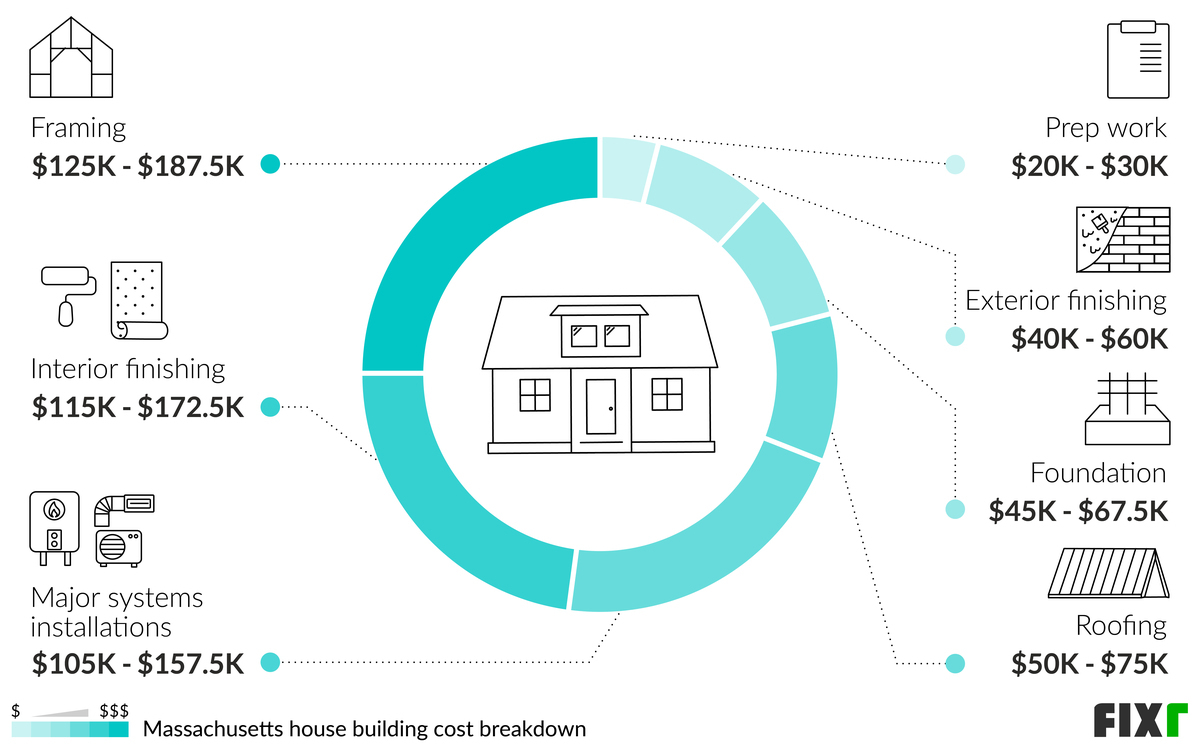 Labor Cost to Build a House in Massachusetts

Many professionals may work on your home during the building process. In most cases, you work with a builder, architect, or design-build firm to start your project. From there, the person or firm may manage the project, or you can hire a general contractor for the job. Whoever oversees the project is responsible for hiring the various professionals who do most of the labor. The project costs vary depending on the rate each professional charges for the job. Labor costs vary depending on the home style, detail, workforce, and materials. Some materials may be more costly and difficult to work with than others, increasing your labor costs.

Location can also change your project costs. In some high-end neighborhoods like Wellesley and Weston and areas like the Back Bay in Boston, labor costs may be higher than in other areas. As such, most professionals have a cost range they charge for the work. In addition, your general contractor or builder generally gets an additional 10% to 20% of the total cost as their fee for overseeing the build. Below are the average hourly costs of most professionals who may work on your home in Massachusetts. 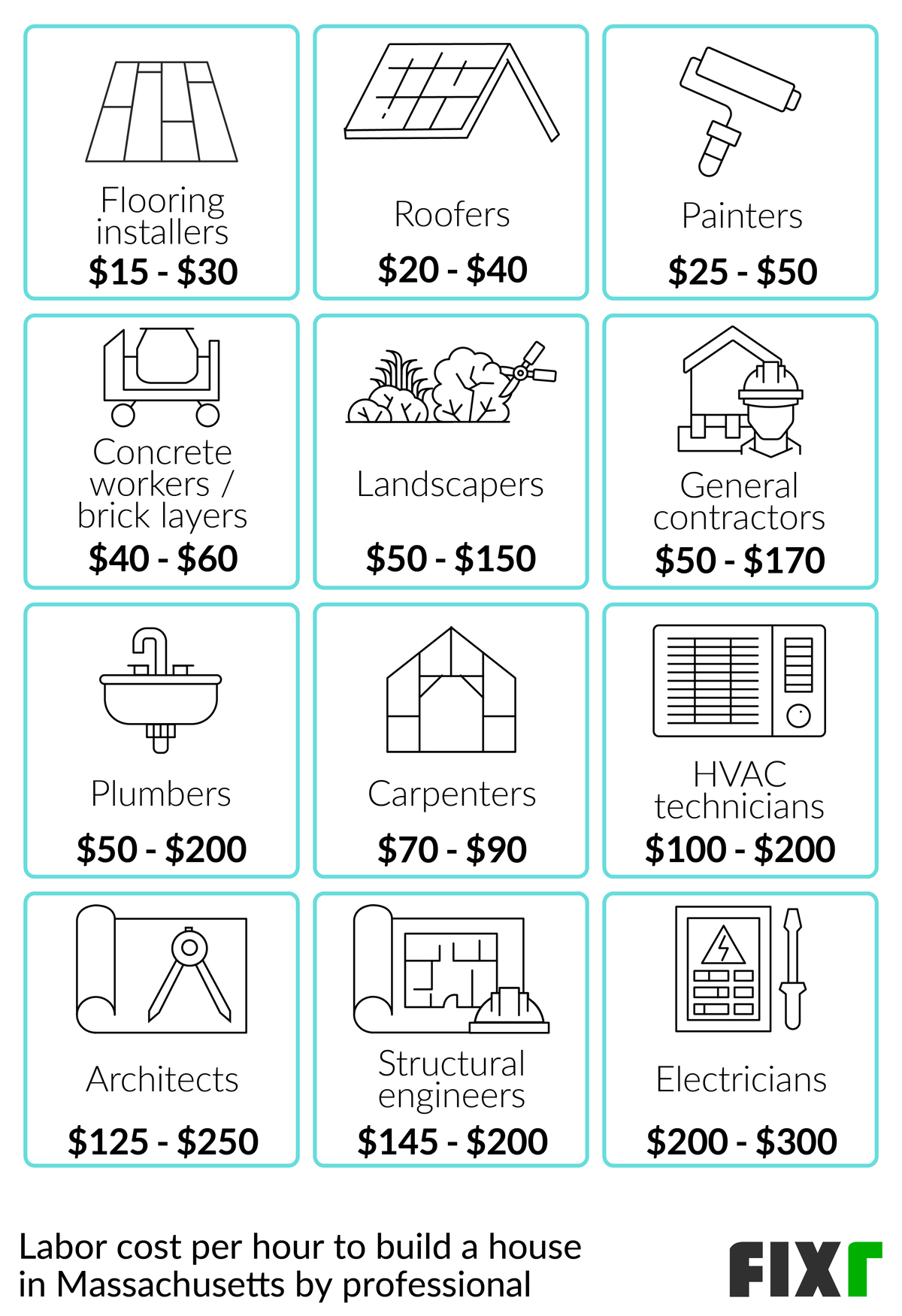 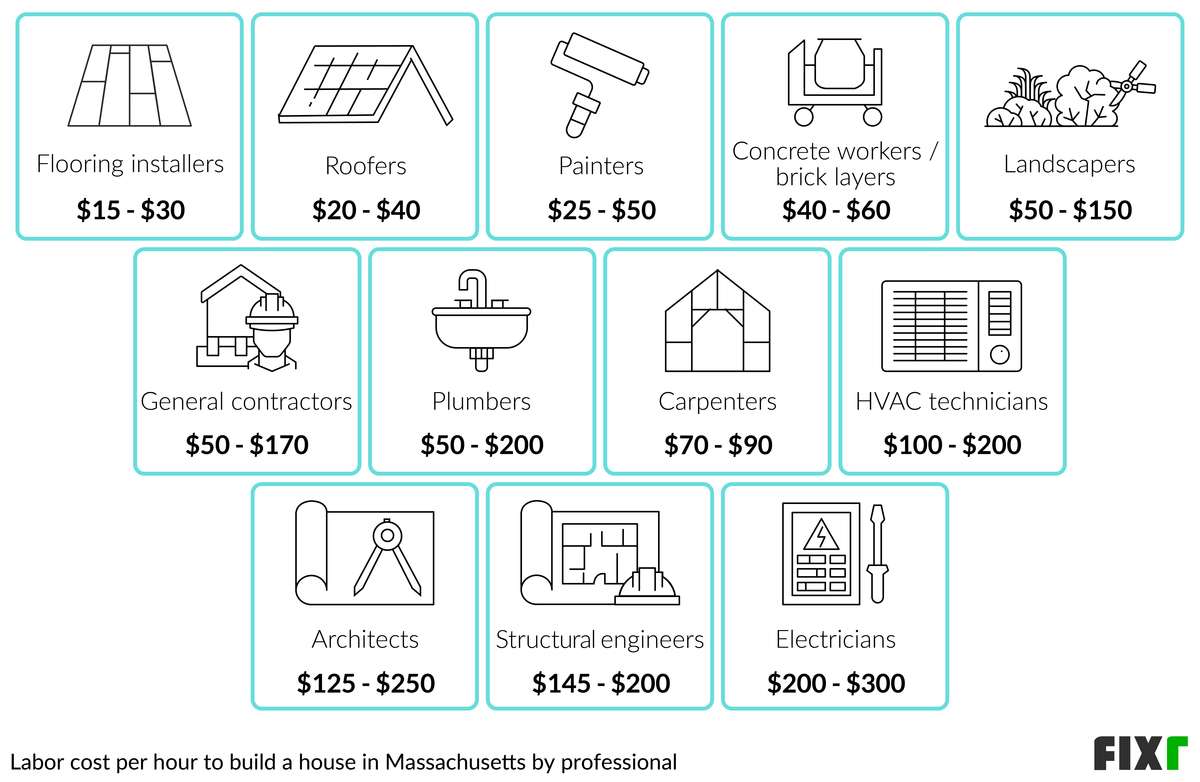 How Much Are Building Permits in Massachusetts?

Building permits in Massachusetts range in cost due to several things, including the city or town and the average cost of your building. The average permit cost for residential construction is $15 for every $1,000 of construction cost. Because there are hard and soft costs involved in building a home, your permit fees may not be based on the total amount. Instead, they may be based on hard construction costs. Speak to your local municipality for more information if you are unsure.

Building vs Buying a Home in Massachusetts

Purchasing a home is faster than building. You may also have more choices for location because not every town or area has suitable building lots. Those that may be suitable may already have properties that must be demoed and removed.

However, building allows you to customize the home to your needs. So, this can be an advantage if you have the time to build and no homes on the market match your needs.

Get free estimates from trusted home construction companies near me

You can legally build your own home in Massachusetts. However, you must complete the long-form permit and submit to an inspection. Massachusetts has some of the toughest building codes in the country, and if you are unsure of the materials and conditions needed to meet them, your home will not be granted occupancy when complete.

The minimum square footage for a house in Massachusetts is 150 sq.ft., and at least 1 room must be fully habitable and meet all state building and occupancy codes.

The permit is issued in 30 days or less if your application is complete and all prerequisites are done.

How much does it cost to build a house in Massachusetts in my city?

Cost to build a house in Massachusetts varies greatly by region (and even by zip code). To get free estimates from local contractors, please indicate yours. 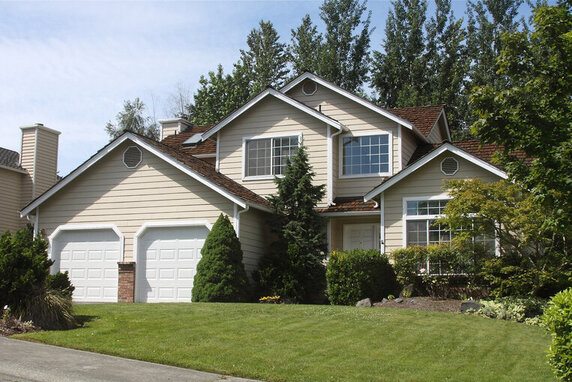 builders near you
Get free estimates on Fixr.com from trusted builders in your area

Find builders near you