The average cost to have a chimney inspected is $300.

Why Hire a Chimney Inspector
How Often Do I Need to Inspect My Chimney?
Types of Inspections
Video Inspection
After the Inspection
Labor
Maintenance
Enhancement and Improvement Costs
Additional Considerations and Costs
FAQ

How Much Does It Cost to Inspect a Chimney?

A chimney inspection is performed to confirm the safety of an existing chimney. Chimney inspections are recommended on an annual basis to improve heating performance, prevent chimney fires, and reduce carbon monoxide risk. During a chimney inspection, an inspector checks for blockages and debris buildup.

The average cost of a Level 2 chimney inspection performed by a certified CSIA inspector is $300 including visual scanning, roof access, video inspection, and a basic cleaning.

Why Hire a Chimney Inspector

As part of a home maintenance plan, every homeowner must hire a chimney inspector. On an annual basis, before the weather turns cold, a chimney inspector confirms the safety of your chimney. During an annual inspection, a certified inspector looks for any potential clearance issues that could negatively affect operation. Deposits such as soot, creosote, and debris can build up over time. Birds and other wildlife may block the chimney with their nesting materials.

Even if the chimney looks solid without any damage on the exterior, interior issues may be present, including cracks and rusting metal. Inspectors identify any issues that could lead to a chimney fire or carbon monoxide exposure. According to the National Fire Protection Association, heating equipment is responsible for 15% of all residential fires and 19% of home fire fatalities. Addressing any chimney issues identified during an inspection improves heating efficiency and overall safety.

Chimney inspectors are also contracted when home heating issues occur. Signs that an inspection is needed include a burnt odor when heating a room, excessive smoke from a fireplace, and poorly burning fires. When a fireplace is not in use, reach inside the liner to check for evidence of greasy buildup of soot or creosote. Grease increases fire risk, while creosote emits dangerous odors that can be toxic to humans.

How Often Do I Need to Inspect My Chimney?

The Chimney Safety Institute of America advises homeowners to hire an inspector at least once a year to confirm structural soundness and check for any clearance problems. Chimneys connected to open masonry style fireplaces may need inspections sooner if there is evidence of soot buildup in excess of 1/8-inch. A common misconception is that chimneys connected to gas fireplaces don’t require an annual inspection like wood-burning fireplaces. However, gas fireplaces are still prone to blockage issues from wildlife like birds. Also, debris builds up from ceramic logs throughout the year. Cracks inside the chimney may occur and lead to condensation issues. Condensation damages the flue 1 tiles and can eventually cause them to break off.

Homeowners who use their fireplace minimally often choose to forego an annual inspection and opt for an inspection every other year. However, aging chimneys should be inspected at least once a year since they are more susceptible to structural failure. New construction projects should be inspected before initial use and midway through the first heating season.

Level 1 chimney inspections are considered the lowest level type offered. Level 1 inspections are conducted on a routine basis, usually with a basic chimney sweep as part of the service contract. All easily accessible parts of the chimney are inspected, including portions of the interior, exterior, chimney connection, and appliances. Inspectors will not require any special tools besides a flashlight and possibly a screwdriver to take a better look at any entry points. A visible inspection identifies obstructions and deposit buildups. This type of inspection confirms that the basic structure is intact and there is no visible evidence of damage. The average cost of a Level 1 chimney inspection is between $100 and $150.

Chimney video inspections are commonly performed as part of a Level 2 or Level 3 inspection. Video inspections identify problems that can’t be seen during a visual scan of a chimney. A small video camera attached to a swiveling rod is snaked through the chimney while connected to a computer or tablet. Through the live camera feed, the inspector checks for issues, such as breaks and cracks in the liner. Corrosion could also be identified on a metal chimney liner. Video inspections are useful for pinpointing the exact location of an issue prior to scheduling any repairs.

All inspections include a cleaning with service unless the company notes otherwise. The cleaning resolves issues such as soot and creosote buildup immediately. Chimney sweeps either start sweeping from the roof down, or start at the flue and work their way up to the roof. All debris from the lining is loosened and then vacuumed away. During the cleaning, any issues caused by wildlife could also be addressed. For all other repairs, another appointment is usually required. Chimney service companies and chimney sweeps usually perform both inspections and repairs. Frequently, home inspection companies will complete inspections only and refer you to chimney service professionals for subsequent repairs.

If video inspections were done, an inspector will usually provide a digital copy of the recording via email.

Chimney inspections are only available through professional service providers. Choose inspectors certified by the Chimney Sweep Institute of America and confirm that the service provider is licensed and insured. A Level 1 inspection will take approximately 20 minutes to complete, a Level 2 inspection takes at least 60 minutes, while Level 3 inspections can last several days if major structural changes need to be made. If inspection reports are generated on site, an additional 20 minutes of service time is required.

Usually, chimney sweeps charge a flat rate per inspection/cleaning appointment. However, a home inspector may charge by the hour at a rate of $100 per hour. Chimney inspections and sweeps are a common service with providers typically located in close proximity to your home. Very rarely would a travel fee be applied to an inspection. Based on higher overall cost of living, metropolitan areas will have a higher average cost for chimney inspections. Rural and suburban areas will be at the lower range.

Proper maintenance, including an annual chimney inspection and sweep saves you a substantial amount of money. If no issues are suspected, a Level 1 inspection and basic cleaning reduces the chance of future problems. Additional maintenance recommendations include:

Chimney repairs may be needed following an inspection. A brick chimney repair pro can fix any cracks formed in existing masonry work. The average cost for brick chimney repair is $250 for labor and supplies to patch small cracks without any rebuilding needed. A chimney cap replacement is needed if your cap has been damaged due to poor weather conditions or wildlife. The average cost to have a replacement cap installed by a professional is $150. When a chimney crown is damaged, the excess water can cause bricks to separate and damage clay tiles. The total cost of a chimney crown repair is around $750.

Inspectors can check for structural soundness of a chimney in the event of an earthquake. Chimneys commonly collapse during an earthquake, but an inspector checking for defects can prevent this. During this type of inspection, a professional looks for crumbling mortar 4 between brickwork, poor lateral support due to missing steel straps, chimney footing defects, and any separation noted between chimney and building. The cost of this type of inspection will be approximately $350.

The average cost to have a chimney inspected is $300 for a Level 2 inspection with video scanning and cleaning.

The exterior of a chimney is visually scanned for any masonry defects. All working parts are evaluated to confirm they are functioning properly. The roof, attic, and flue will be looked at through Level 2 inspections and above.

Chimney inspections include a visual scan of all working parts of the chimney. An inspector provides a report with any recommendations for future repairs or services. A basic sweep is usually included with all levels of inspections. 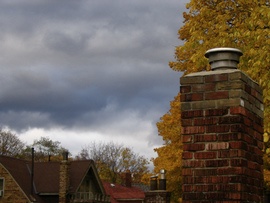 1 Flue: A duct or pipe through which exhaust gases from a fireplace, stove or boiler are released to the outdoors
2 Joints: A fold, line, or groove where two pieces of material join together
3 Firebox: The chamber in a fireplace that contains the fire. It is usually lined with firebrick so it can withstand the extreme heat that it is exposed to. Manufactured fireplaces have fireboxes made of sheet metal 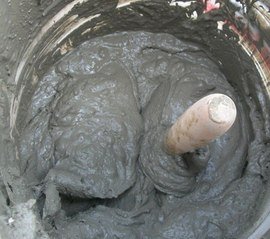 4 Mortar: A mixture of Portland cement or lime or a combination of both, sand, and water used to bind bricks, stones, and concrete masonry units together

How much does it cost to have a chimney inspected in my city?

Cost to have a chimney inspected varies greatly by region (and even by zip code). To get free estimates from local contractors, please indicate yours. 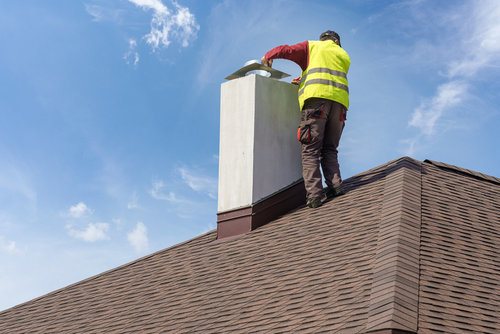