How Much Does It Cost to Build a House in California?

Average range: $1M - $1.68M
Low
$400,000
Average Cost
$1.35M
High
$2.4M
(2,700 sq.ft. Mediterranean-style home located in Orange County with moderate upgrades and 3 bedrooms)
Get free estimates from local contractors near you
Here's what happens next
Step 1
Answer a few questions
Tell us what you are looking for.
Step 2
Find out how much your project will cost
The contractors will offer competitive free quotes for your job.
Step 3
Compare the quotes and hire
Compare the estimates and hire the contractor who best fits your needs.

California is a beautiful coastal state with many architectural styles. This diverse state has many cultures, landscapes, and ways of living, contributing to different housing costs. Homes built in the northern areas may have lower building costs than those constructed in the middle and southern areas of the state, with more densely populated areas having the highest costs. Building costs and the average home size are above the national average in California, where the cost of living is above average.

Cost to Build a House in California

Build a House in California Cost by Project Range

Average Cost to Build a House in California by Type

New homes in California can be built using two methods - traditional or stick building and modular building. Stick building is the construction most people are familiar with where your home is built on-site using traditional building methods. Modular construction is a newer building method where the home is built off-site in a controlled indoor location. Once built, it is transported, usually in pieces, to the location where it is assembled. Because it is built indoors in a controlled environment, this can considerably lower the project cost.

Both building methods are fairly common in California, but modular is more likely to be found in urban and well-populated areas, while stick building is more common in less populated spaces. Both can give you a range of building styles. Below are the average costs per square foot to build a new home in California using the different methods. 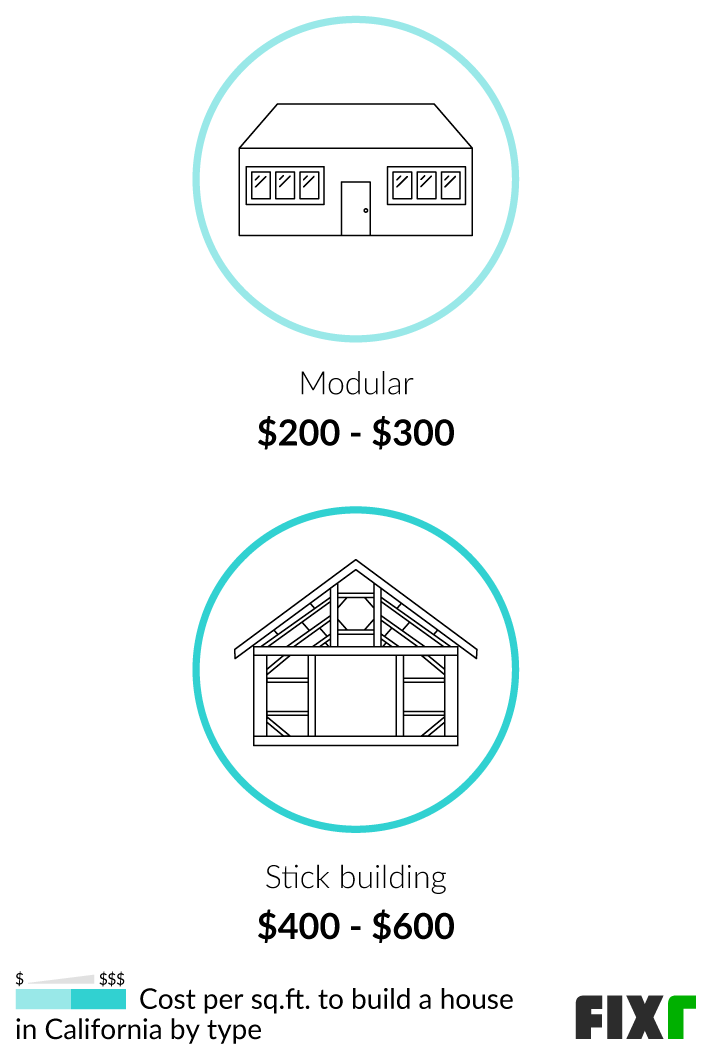 Cost per Square Foot to Build a House in California

You can also build homes with different materials and customization levels. A home built by a builder or firm for sale usually meets the minimum standards for a single-family home or may be considered average standard. These have lower costs per square foot than those where you work with a builder. Also, your costs are lower if you select a basic floor plan than if you change the floor plan. These homes may be considered good or best standard, with quality materials but no luxury changes or additions. These homes have an average cost per square foot of $400 to $600 in California but may start at $300 in some areas. 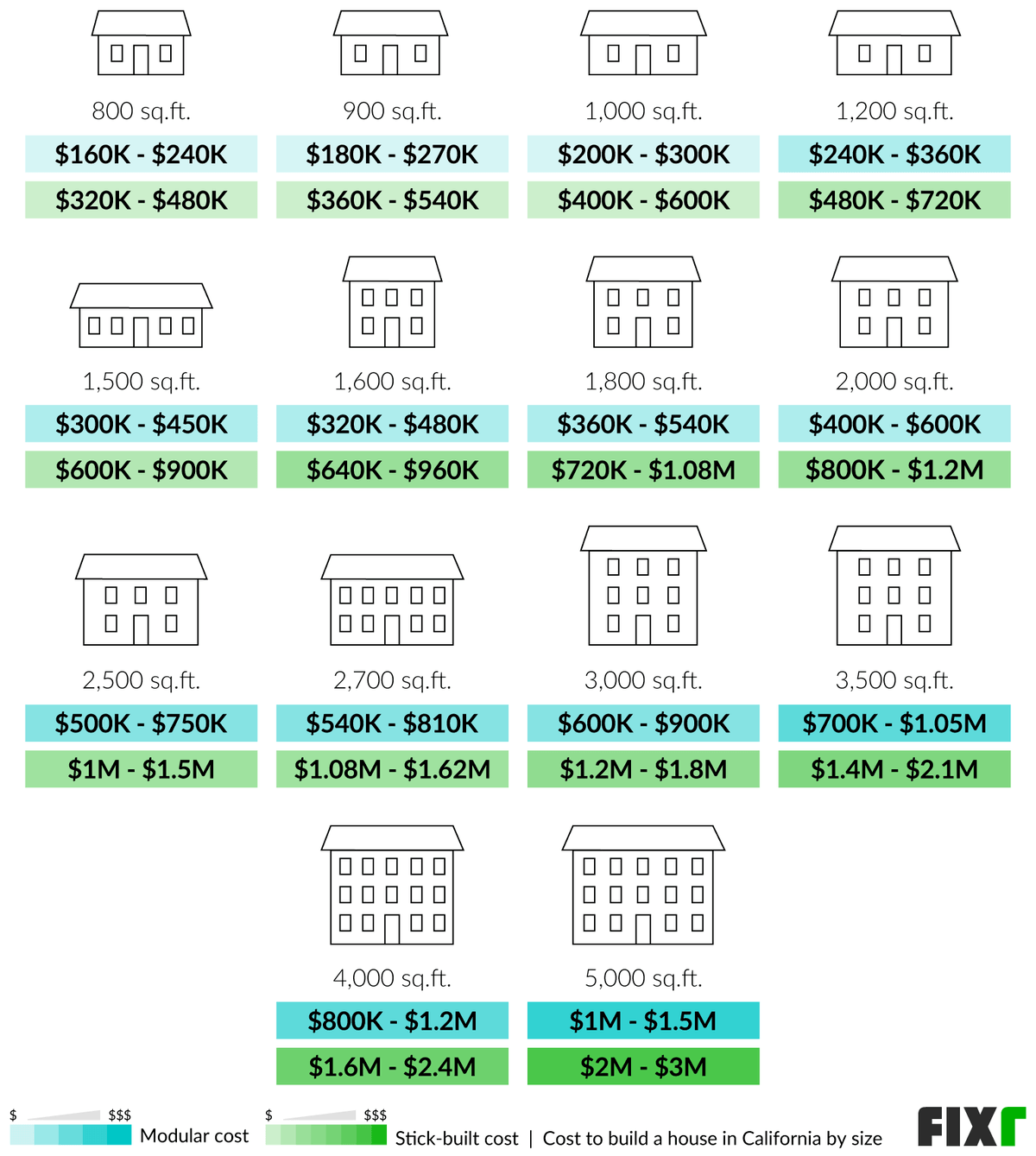 No matter which home style you have or where it is located, one thing it has is a minimum of one bedroom. Most homes in California are slightly above average, with at least 3 to 4 bedrooms per home, but smaller homes with 1 or 2 bedrooms are available, and larger homes with 5 or more bedrooms. While you can have large homes with 1 bedroom or smaller-than-average homes with 3 bedrooms, most homes are larger the more bedrooms they have. 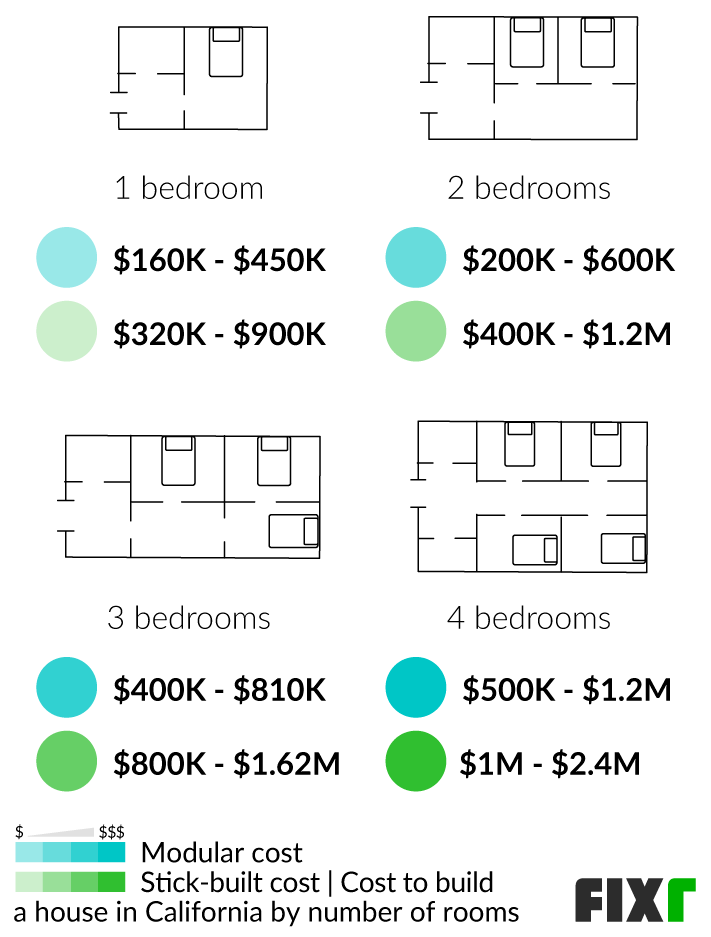 Homes in California come in many styles, from the California ranch to the popular colonial. Each home type or style may have its own floor plan and the average number of stories. This means you are likely to find single-story, 2-story, and 3-story homes in California, depending on the home style and region.

Two-story homes are the most affordable to build per square foot, but some 3-story homes may fall into the same category. This is because they tend to have smaller foundations and roofs than single-story homes.

You are more likely to find smaller homes being built that are single-story, while larger homes tend to have 2 or 3 stories to help keep costs down. The larger the home’s footprint 2, the higher the costs. Building up tends to be slightly cheaper than building out. The same is true for modular and stick-built homes. Below are the average costs to build a home in California based on the stories and their average square footage for a 1, 2, and 3-story house. 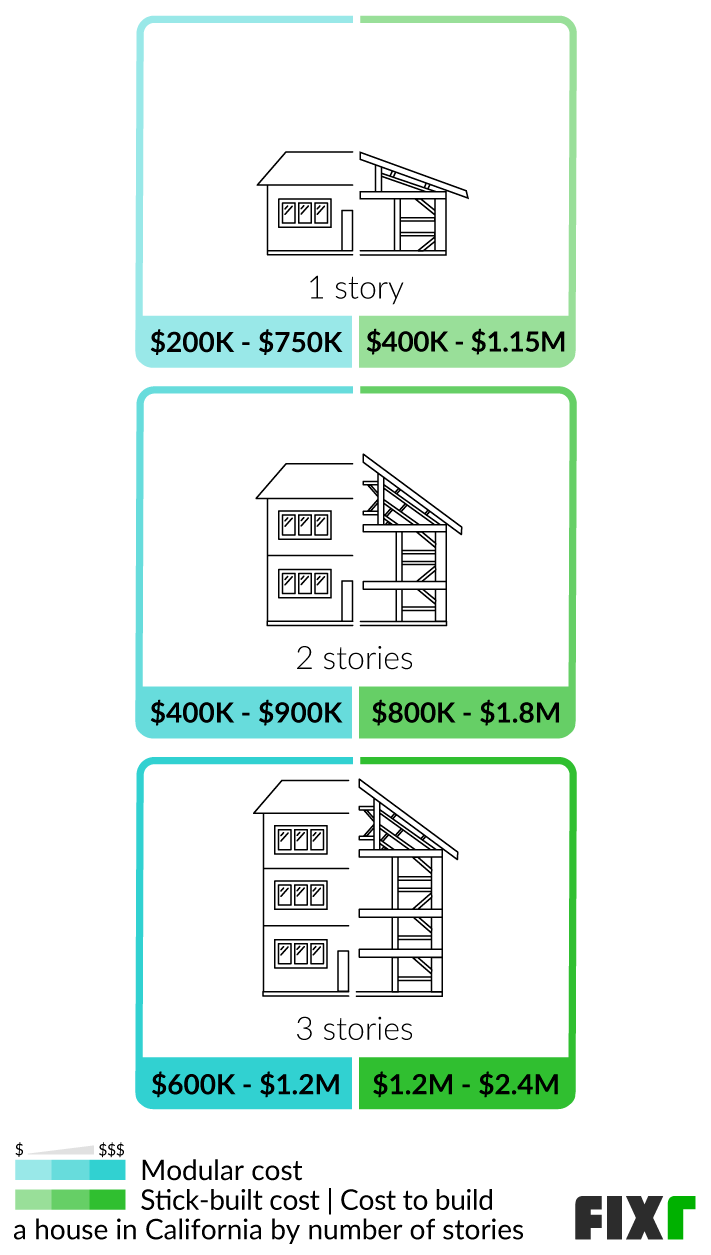 Price to Build a House in California by Style

There are many popular housing styles in California. Depending on the area and your personal preferences, you may build one of many homes. For example, Mediterranean and Spanish-style homes are common in the southern areas, while in other areas, you may find more ranches, Cape Cods, and colonials. In the northern areas, you can also find more Victorians, while on the coast in larger cities, there are more contemporary-style homes.

Different types have varying costs, average footprints, and square footage, impacting costs. All styles can be built using modular or stick-building construction, but you may find modular building can be more difficult in some parts. This leads to a cost range for each style, depending on its size, material, and construction method. Overlapping costs between home styles are also common, depending on the area. Below are the average costs to build the most common home styles in California for their average sizes using both construction methods. 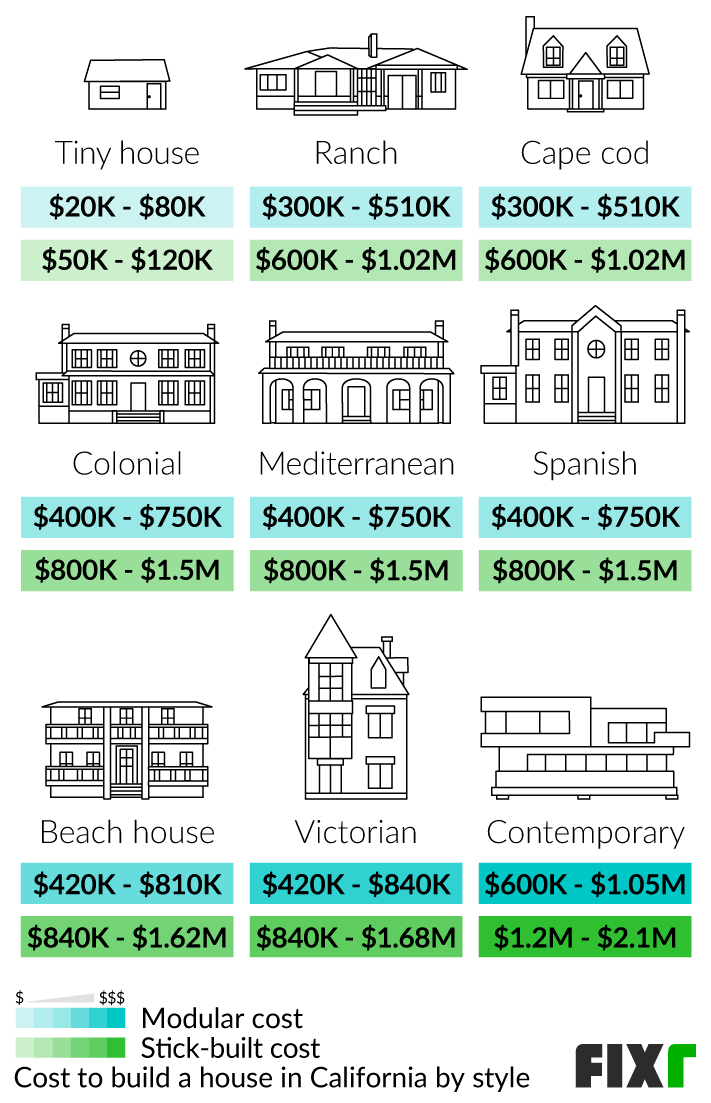 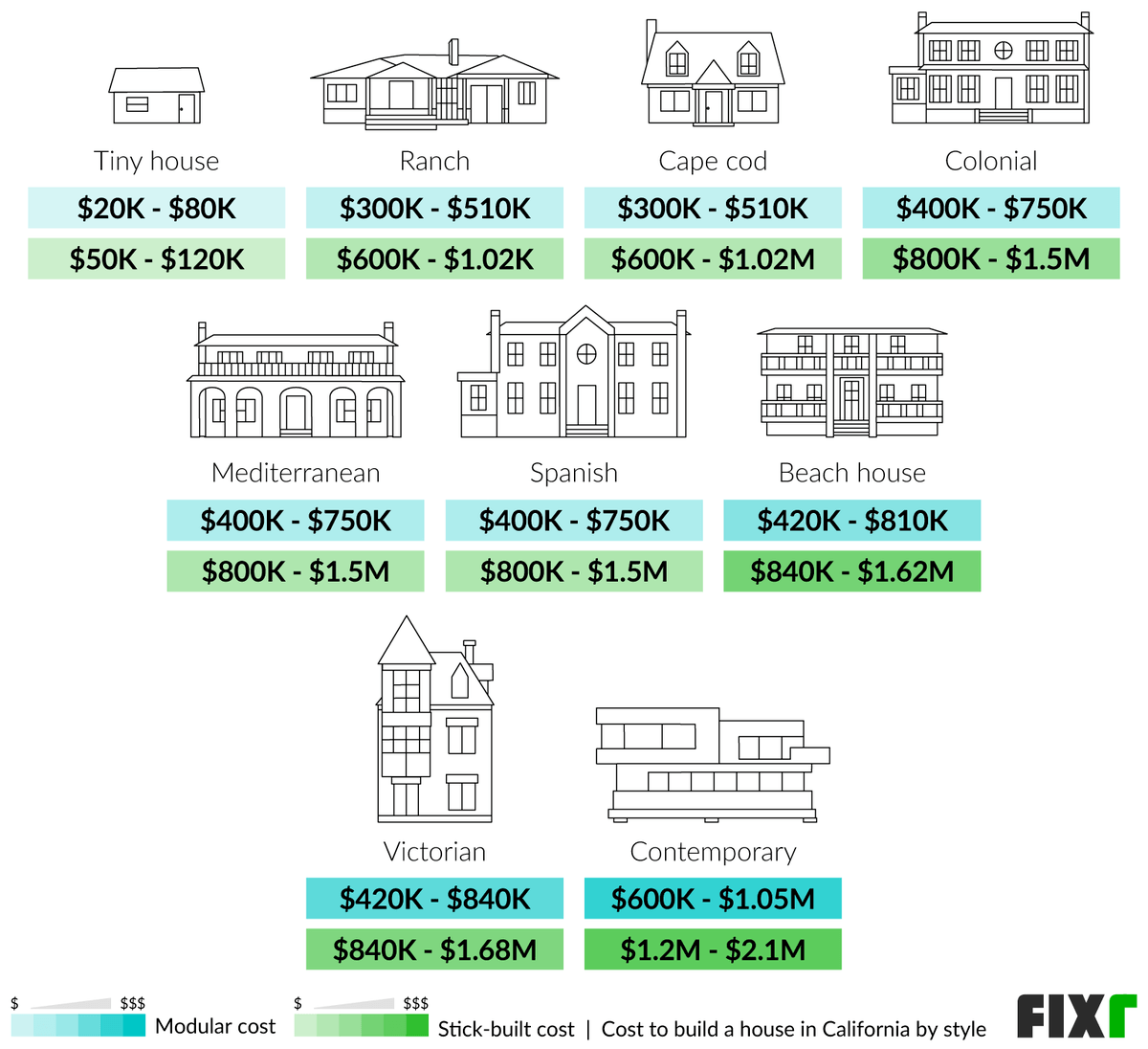 Every home build is different, but most proceed in a fairly expected way. This includes the type of work that needs to be done, from breaking ground and preparing the foundation to framing the home, roughing in the major systems, and finishing the home’s interior and exterior. Each area has materials, professionals, and attributes that impact the project cost.

When breaking down the total project costs, remember there can be variables for every area. This leads to a range of costs for the average home. You can change the quality of materials from one area of the home, and some parts may demand more work than others. For example, homes in California must be built with earthquakes and wildfires in mind, increasing the material cost in some areas. Below are the average cost breakdowns for a 2,700 sq.ft. stick-built home in California. Costs for modular homes are laid out differently because they are built using different methods. 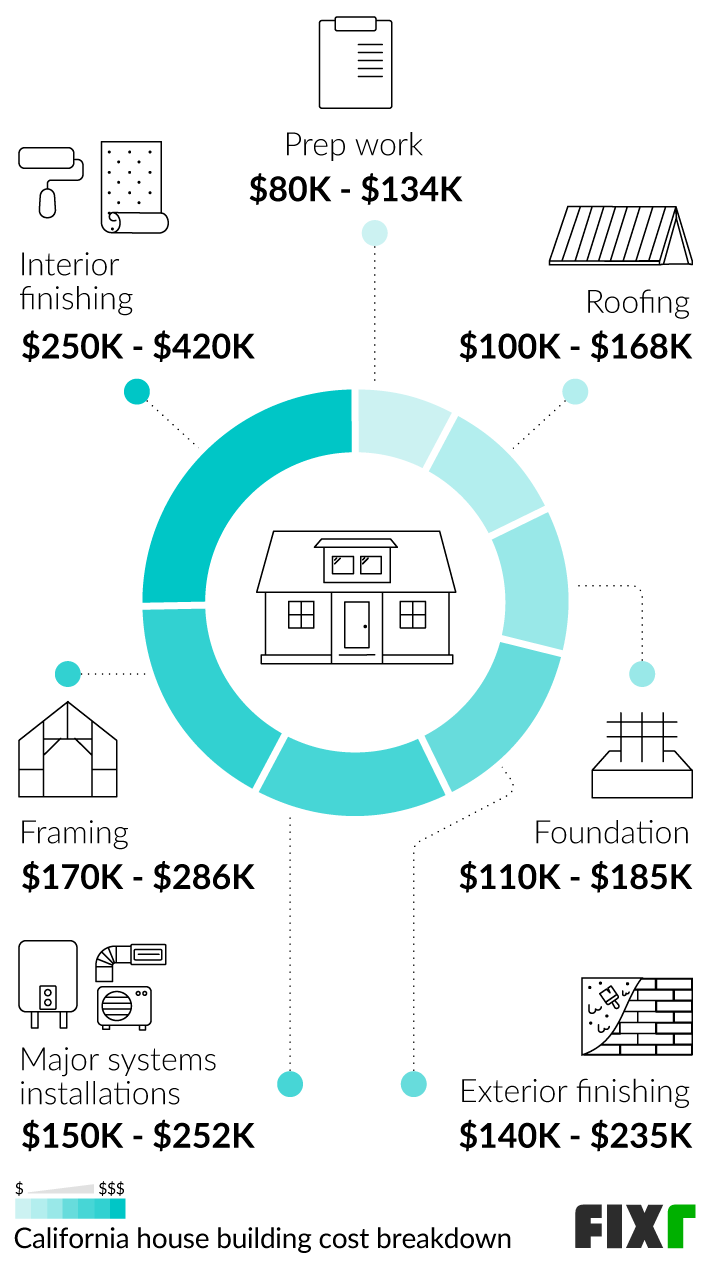 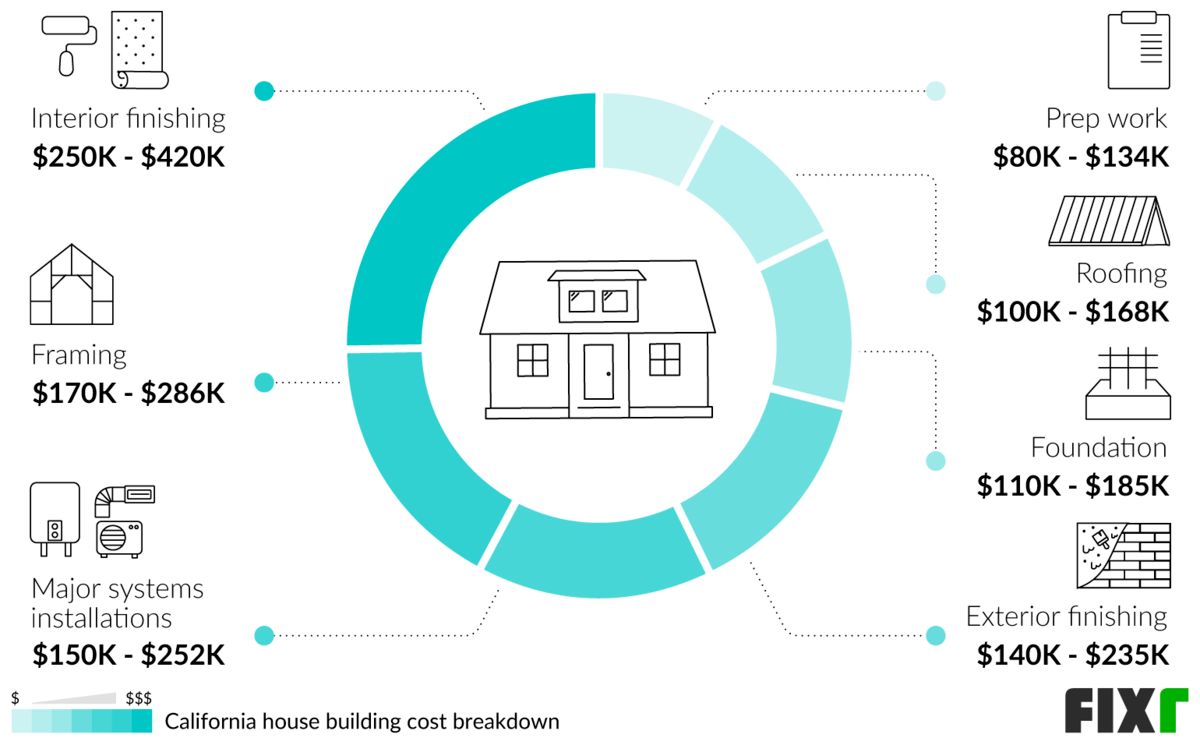 Labor Cost to Build a House in California

Many professionals are involved in building a home. Each professional may charge a different rate for their services. Your materials and location can impact the labor cost of building a home in California. Homes built in the southernmost parts and major cities have higher labor costs than homes built in less populated areas. Also, some materials may be more difficult or time-consuming to work with, influencing your project’s labor cost. Below are the average costs per hour for the different professionals you may need. 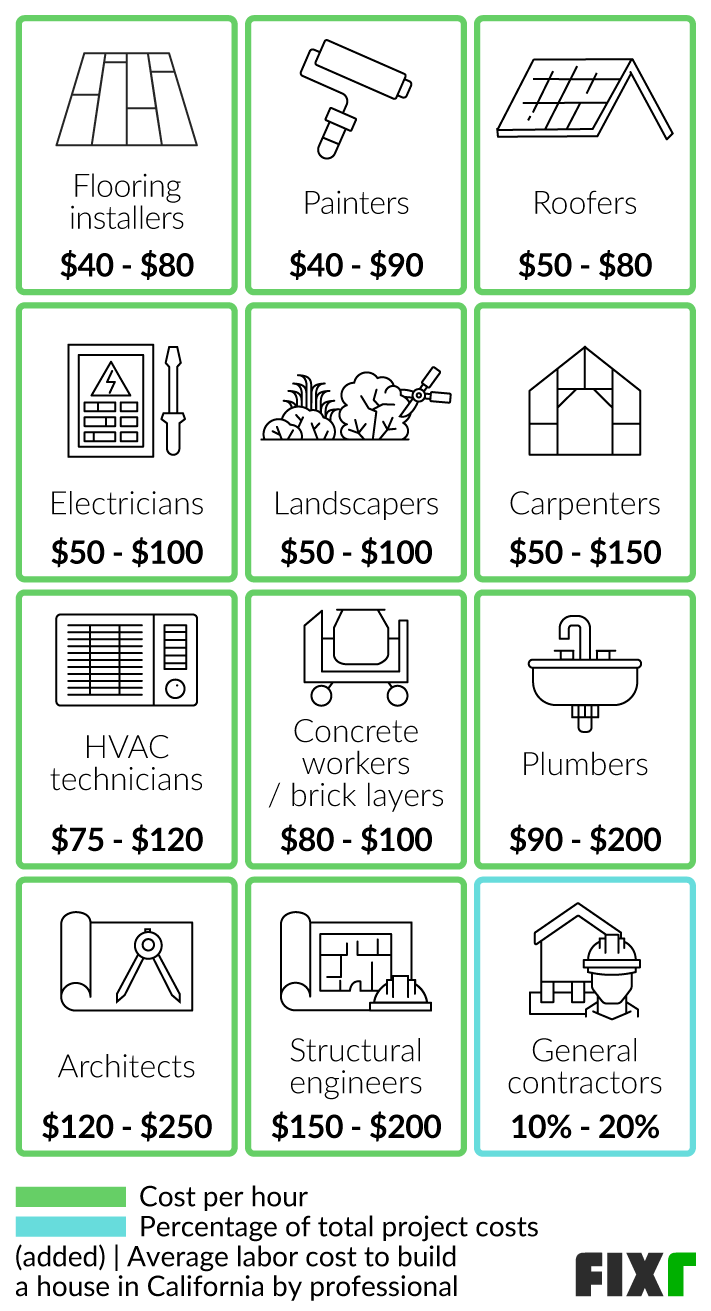 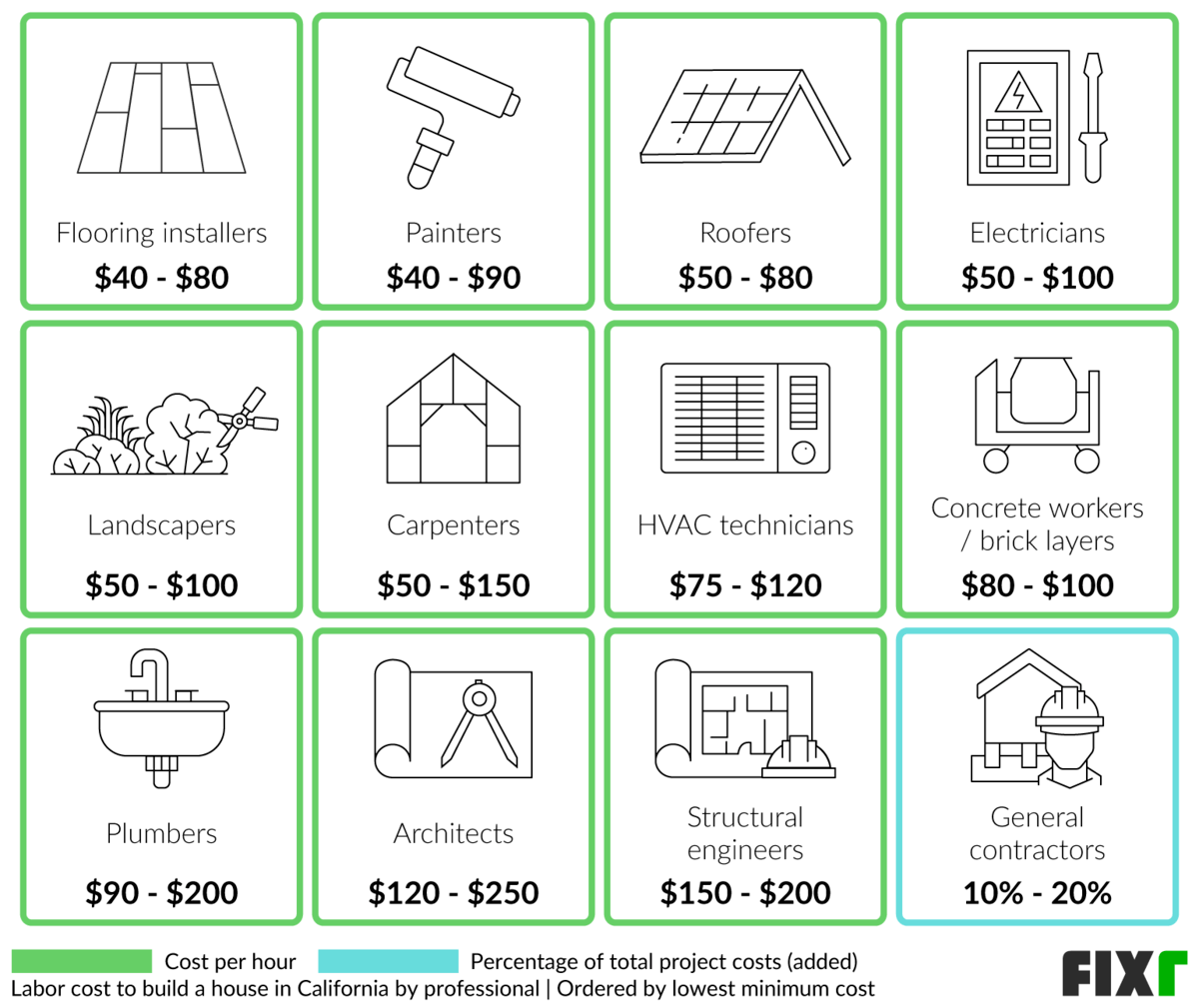 Average Cost to Build a Home in California by Location

California is a large state extending over a large portion of the West Coast. For this reason, there is a fairly diverse range of costs for home building as you move through the state. Costs tend to be less expensive in the most northern parts of the state and most expensive in the southernmost areas. However, different regions and counties may have costs influencing your project fees. Below are the total cost ranges per square foot in some of the most populated areas of California. 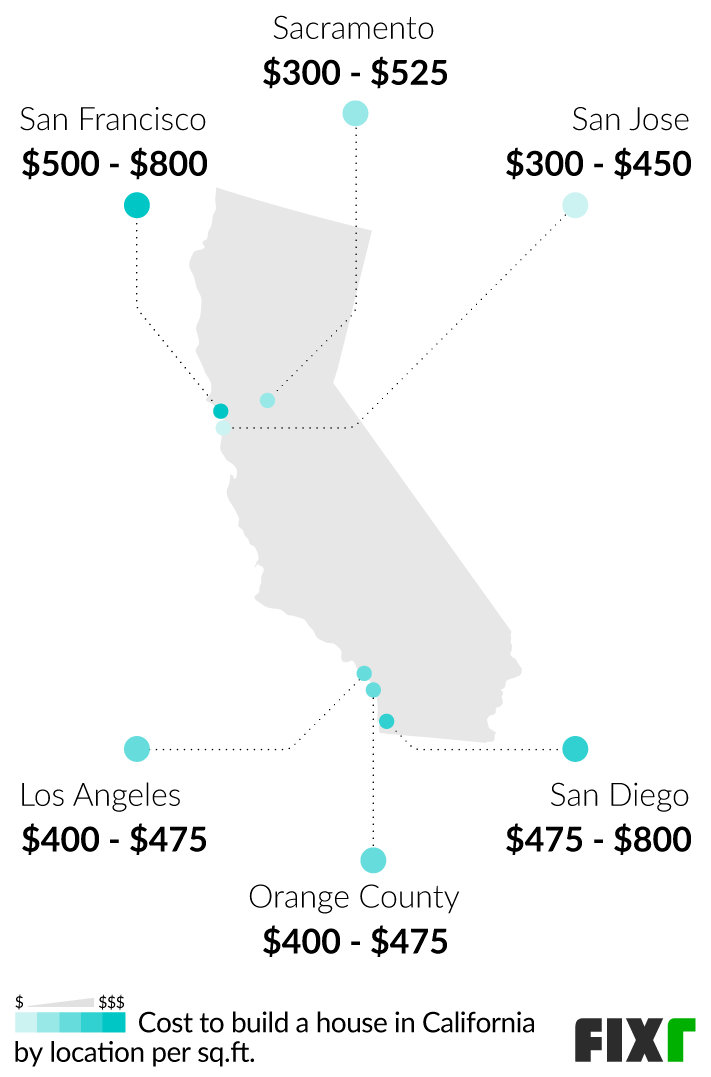 Cost per Square Foot to Rebuild a House in California

There are many reasons you may want to rebuild a home, particularly in California. If the home is old and outdated, you may want to demolish it and begin from scratch for the floorplan and features you want. Many older homes in California are not earthquake-proof, so retrofitting can be an expensive and difficult process, making rebuilding an attractive option. In addition, the number of wildfires in the area has also led to the need to rebuild for many people whose homes were damaged. These rebuilds lead to different cost sets.

The frame is an important part. In California, the average cost to frame a home ranges from $6 to $12 per square foot. Costs fluctuate based on the current lumber price, with lumber often costing more per square foot than labor. 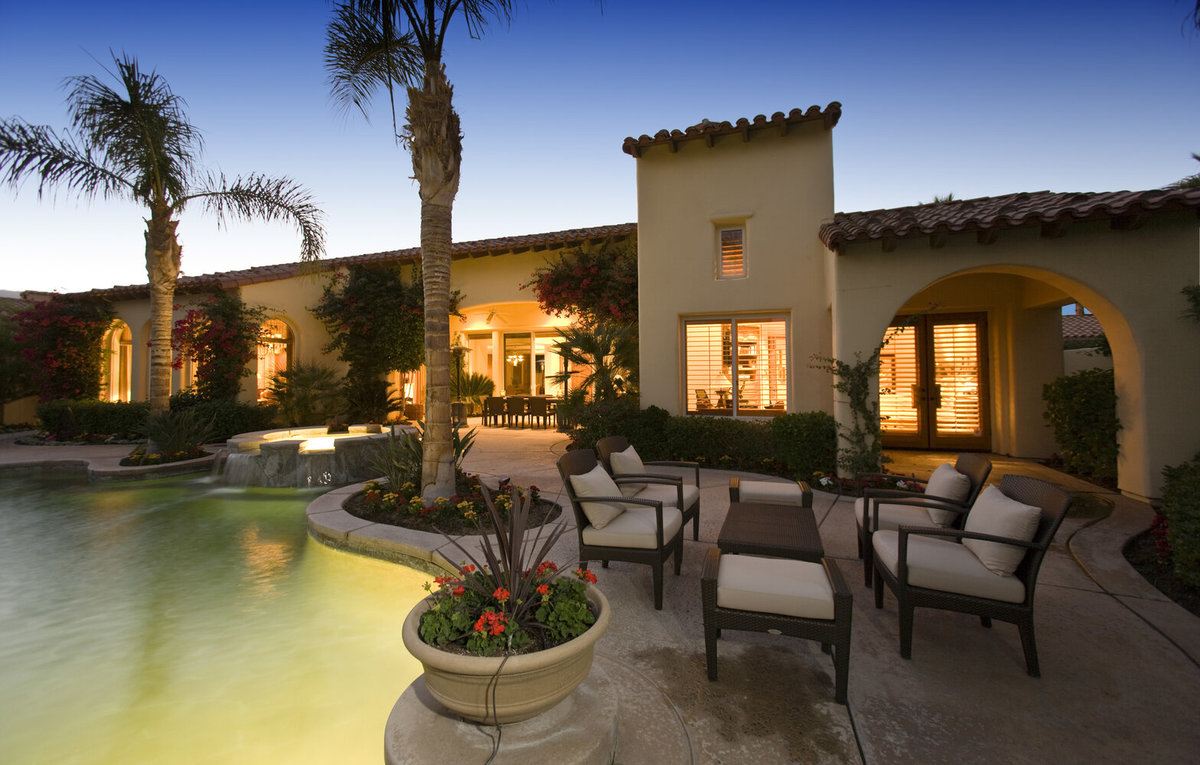 How Much Are Building Permits in California?

The average cost for a building permit in California is $1,200. This cost is set by federal regulations. However, you may be subject to additional permits depending on the home you build and the materials. California has some of the strictest building codes and regulations for sustainability, low VOC materials, and building safety. This can increase the total costs of building permits to as much as $3,000, depending on the project.

Building vs Buying a Home in California

There are many reasons to purchase a home and build a new one in California. In most cases, purchasing existing real estate is less expensive than building a new home. However, current home prices in California are reaching $1,000 per square foot. Even factoring in the cost of purchasing land, building a new home in some areas may be less expensive.

However, the cost of housing is volatile and can change. For this reason, you may find that purchasing a home may eventually be the better option cost-wise. You may also want to consider that older homes in California are not optimized for many of the state’s issues, including droughts and wildfires. Building a new home gives you the option to include flame-retardant materials, water-saving appliances, and better energy efficiency, helping you save over the long run.

Get free estimates from trusted home construction companies near me

If you obtain the required permits and follow all building codes and regulations, yes, you can legally build your own home. However, California has some of the strictest building laws in the nation, so you need to have a good understanding before you begin.

There is no minimum square footage for a house in California. There are no tiny home regulations, provided you follow the state building codes and regulations. You can build a tiny home of less than 100 sq.ft. in the state.

This varies by municipality, project complexity, and season. In most areas, you receive the permit in 30 days or less unless there is an issue.

Definitions in laymen's terms, cost considerations, pictures and things you need to know.
See full cheat sheet.
1 Grade: The process of evening out the ground's surface, making it either flat or sloped.

2 Footprint: The entire area of ground covered by a building, including the exterior walls and porch or patio areas

How much does it cost to build a house in California in my city?

Cost to build a house in California varies greatly by region (and even by zip code). To get free estimates from local contractors, please indicate yours. 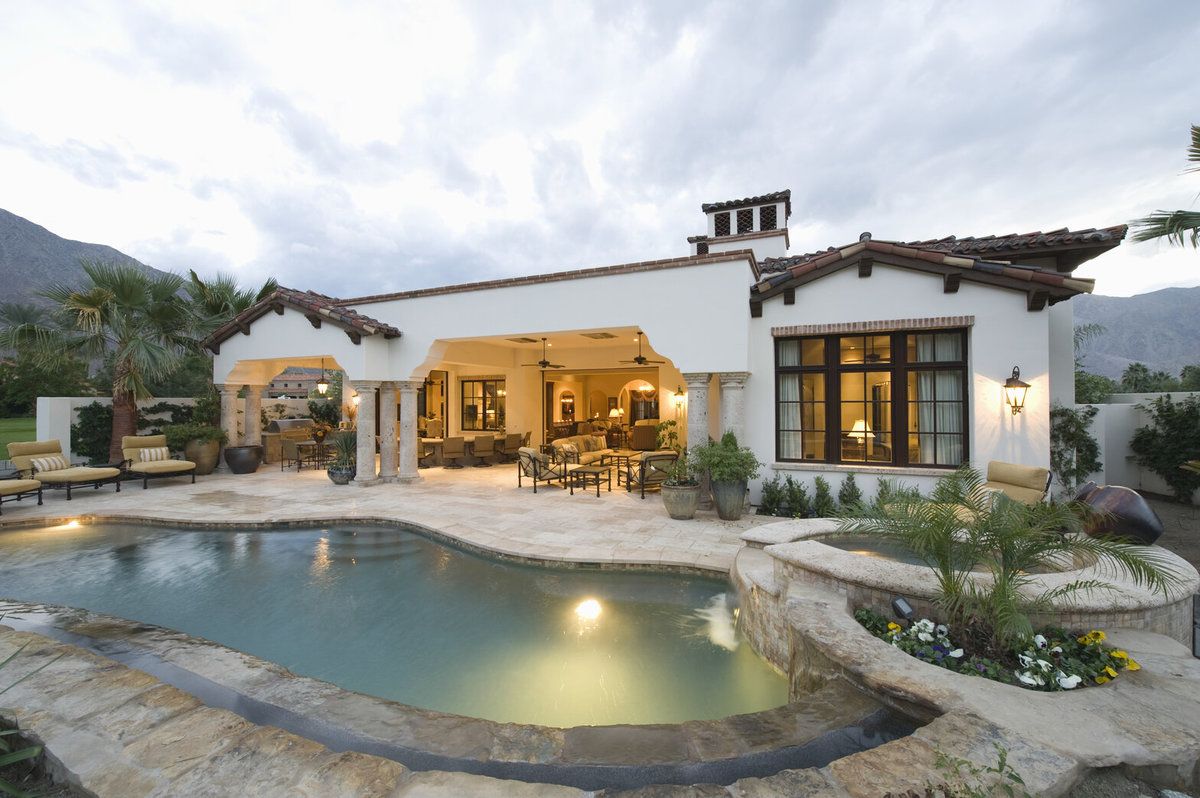