The average cost of installing a garbage disposal system is $300.

How much does it cost to install a garbage disposal?

Garbage disposals are a convenient way of disposing of leftover food waste in the kitchen. Rather than needing to put the waste into the garbage, where it could potentially end up in a landfill, garbage disposals let you grind the waste up into tiny particles that can be flushed to the septic tank or sewer.

Garbage disposals come in many sizes depending on a family’s needs, and many offer other features as well, such as quiet operation, that can cause costs to vary. The average homeowner typically finds that they pay around $300 to have one installed.

Garbage disposals are convenient and handy, but they aren’t for everyone. Like all optional appliances, they have many positive attributes, as well as a few potential drawbacks to consider.

Most modern garbage disposals are extremely efficient, quick, and quiet. They help eliminate odors caused by a build-up of decaying food in the garbage, and allow users to simply scrape and rinse a plate or dish straight into the sink before washing. In some cases, garbage disposals can be seen as an eco-friendly alternative to simply putting more garbage into landfills.

However, garbage disposals are also prone to clogs, particularly if too large an item was put into them. If they aren’t properly cleaned and maintained, they can also clog up your pipes. They may develop odors if too much food is left inside of them for too long, and some cheaper models are also prone to leaks. Some models may also be loud, while other models are not meant to be used with specific sinks or with septic tanks, meaning that there is sometimes a high learning curve involved in choosing the right model.

Both methods are highly effective and reducing waste and clearing it. The biggest difference is in timing. With a batch disposal, you fill the unit, cover it, then turn it on. If it’s completely full, it will take a little while to clear through the waste, and if you find you forgot something, you need to wait until it’s done to put the new waste in.

Continuous feed disposals work constantly and do not require covering. They do require constantly running water, however, which can lead to extra water waste. Once the unit is running, you can keep adding more waste to it, and it will dispose of large amounts slightly faster than a batch feed. Keep in mind, however, that because it isn’t covered, a continuous feed can be a hazard for fingers, and dropped utensils. Batch feeds are therefore considered the safer model.

In most cases, continuous feeds are best for large families and users that will have a lot of waste, while batch feeds may be the better choice for people who will use the unit less frequently.

There is little difference in price between the two styles; most costs for garbage disposals are due to size, horse power, and unit material. Both batch and continuous feed disposals start around $75, with average units costing around $150 each.

Most garbage disposals are made of one of two materials - aluminum and stainless steel. Both come in continuous and batch feeds and both come in a wide range of sizes and speeds.

The biggest differences between them come down to cost and durability. Aluminum models are much less expensive than stainless steel. They start around $75 and don’t go much higher than $300 for most models. However, they are more prone to corrosion and leaks, which can mean they don’t last as long.

Stainless steel units are more expensive, with some units costing more than $1,000. They can last significantly longer, however, with no risk of corrosion or leaking. In most cases, stainless steel units are primarily used by very high volume households and commercial uses, however, where that durability will offset the price tag. Many average households will find that an aluminum unit will work well for roughly 10 years, and that the lower cost is therefore justified.

Motor sizes for garbage disposal are given in horsepower, or HP. These correspond directly to how much waste the unit can handle, and suggested sizes are usually based on how many users are in a household.

Keep in mind, that larger motors not only cost more to purchase, they also cost more to run. Larger units may also burn out faster over time, so it’s best to get the smallest unit that will accommodate your needs.

Installation of a garbage disposal takes between two and four hours on average, with times ranging depending on whether the existing plumbing is set up for a disposal or not, whether this is an outlet or electrical receptacle nearby, what the current sink and plumbing conditions are, and what type and size the disposal is.

During installation, water and electricity are shut off to the area. The old plumbing and sink flange are removed and cleaned of any putty.

The new mounting ring is installed on the bottom of the sink, and the disposal is readied for installation, including getting it set up for electricity and for hooking up to the dishwasher if needed.

The drain is connected, and the disposal hooked up to its mount. The rest of the plumbing is reconnected to the disposal and to the dishwasher. The electricity is hooked up, and everything is sealed and tested.

The labor costs for disposal installation are mostly time related. If everything is ready, in good condition, and the disposal is on hand and easily put in, the plumber will likely only charge for an hour or two of time. If things need to be modified, replaced, or moved to accommodate the disposal, this will take longer, and will up the number of hours needed and therefore the total costs. Most plumbers charge between $45 and $65 per hour, with most disposal installations running $50 per hour for three hours total, making the labor costs roughly $150.

Most disposals will last between 10 and 12 years before needing replacement. Signs that your disposal needs to be replaced include needing to press the reset button frequently, the blades no longer chopping up the waste well or taking longer to chop up the waste, leaking from the bottom of the unit, frequent clogs, or visible corrosion on the unit itself.

Most plumbers will remove the old unit to install the new one at the same hourly rate. This can increase the amount of time needed to install the new unit, therefore increasing costs. This really depends on what condition the rest of the pipes are in, and how hard the old unit is to remove. In many cases, removal will only add an additional $25 to $50 to the total costs, but in some cases the costs could be higher if additional pipes must also be replaced.

The level of maintenance your disposal unit will need can vary depending on how often it’s used, its age, and the type of items you’re putting in it. Make sure to run it frequently to keep it clear and always run water before and after using it, as well as during for continuous feeds.

Do not put large, whole, or solid items into the unit, as these could cause it to clog. Check it frequently for leaks, and if necessary clean the unit with by pouring in half a cup of baking soda, and following with an equal amount of vinegar before running and rinsing with water.

New disposals come with anti-jamming technology at no extra cost. This helps prevent clogs and keeps the unit running. Some older models, however, need a special key or wrench, which can be purchased for around $7 that can help free up jams.

Garbage disposal baffles can be placed around the drain to help prevent items from falling to the unit, such as utensils. They cost around $15.

If your unit frequently develops odors, it is possible to purchase disposal treatments that can help clean it and keep it odor free. They cost around $8 per treatment bottle.

Some units operate from a lightswitch, while others use a push button switch mounted nearby. They cost roughly $100 for the entire system, and can be mounted on the counter, sink, or cabinet for convenience.

If your unit frequently releases odors, there are flanges available that can help seal the top of the unit and prevent odor from escaping. They cost around $30.

Most plumbers are qualified to install disposals, but if a GFCI outlet is needed, an electrician may also be needed.

A typical garbage disposal unit will last between 10 and 12 years.

Disposals should be replaced if they begin to leak or corrode, if they take longer to empty, or if you need to press the reset button often.

Do not put whole or solid items, bones, or inorganic matter into the disposal.

No, glass does not sharpen disposal blades. If you think your blades need sharpening, consult a plumber.​

The average family will use between ½ and ¾ HP. Very large families should use 1 HP, while single people and couples can use ⅓ HP.

Garbage disposals should not be used with fireclay sinks, as they may crack. ​

Definitions in laymen's terms, cost considerations, pictures and things you need to know.
See full cheat sheet.
1 Leach fields: (Also known as Drain field) The part of a septic system that is used to remove pollutants and impurities from the fluid coming out of the septic tank.

How much does it cost to install a garbage disposal unit in my city?

Cost to install a garbage disposal unit varies greatly by region (and even by zip code). To get free estimates from local contractors, please indicate yours. 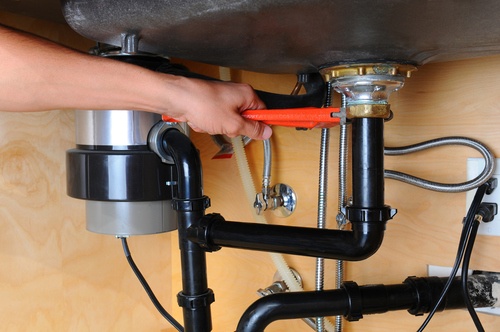