The average cost of home window tinting is $2,100.

How Much Does It Cost to Tint Home Windows?

Window tinting may be more familiar to people when applied to cars, but home window tinting also has many benefits. Done properly, window tints can improve energy efficiency, reduce glare, increase security and privacy, and make your windows more attractive.

Homeowners can apply window tints, but many people choose to use a professional for the best results. At an average cost of $7 per square foot, tinting 300 square feet of windows, the average window space in a home, costs around $2,100.

There are numerous pros to having the windows tinted in your home. Tinting is designed to block the sun’s rays from entering your house through your windows. This, in turn, prevents certain rooms from heating up too quickly. Window tinting makes the room more comfortable and reduces the energy costs needed to cool the space. In addition, tinting your windows also prevents glare, which can improve views and help with indoor activities that involve looking at screens.

Some types of window tinting also improve the privacy of your home by making it more difficult to see through the glass without blocking any light. Security film is also available, which can keep the glass from shattering when hit. It may also reduce the chances of a break-in because it is more difficult to see inside the home.

There are also a few cons to consider when having your windows tinted. Tinting changes the color of the light and darkens the rooms slightly. If you find that this effect is undesirable, it can be difficult and expensive to have the film removed.

Window tints come in several different varieties, from decorative to functional. Each one has a different associated cost as well as benefits to consider.

A large part of the tinting of windows has to do with the window itself, how accessible it is, and what obstacles may be in the way of the installation. This could mean that a window that contains many separate panes might cost more than a window of the same size that features two, larger panes of glass.

Also, very large windows, such as picture or bay windows 1, may be more expensive to cover simply because they require a larger, continuous piece of film. Therefore, the type of windows you want to cover can impact the cost of the job.

While most window films are plain and designed to cover the entire interior of the window glass, it is also possible to purchase window films that have decorative patterns. In addition to frosted or etched appearing films, manufacturers offer a range of options, including patterns such as checks, herringbone, or weaves. Different colors are also available and, in some cases, a “stained glass” appearance. Costs vary for patterns depending on what additional functionality you want, such as reducing light or heat or increasing privacy. In some cases, the cost remains the same, but in most circumstances, expect to pay about $1 more a square foot.

If you are having the windows professionally tinted, most companies simply want access to the windows. This means clearing a path and ensuring that the sill is free of plants, pictures, or other items. Curtains are not usually expected to be removed unless they cannot be tied back.

If you are tinting the windows yourself, the prep work includes cleaning the windows thoroughly with a mixture of no-tears baby shampoo and water. This improves clarity while providing the correct conditions for the material to cling to.

Installation of window film is fairly easy and straightforward, which is why some homeowners choose to DIY. After cleaning the window, spray it with the same cleaning solution. Cut the film to size, and peel away a few inches of the backing of the film. Spray it with the solution, and then press it onto the window. Continue this process from top to bottom down the window, peeling the backing, spraying, and pressing.

Once the film is on the window, use a squeegee to remove any trapped air bubbles and help the film adhere more effectively. The film sticks firmly in about 30 minutes and continues curing to the window for another 4 to 8 days.

The cost of installing the film is usually around $1 to $3 a square foot and the film itself may cost between $5 and $8. Costs, however, vary depending on the type of window. Some windows require more labor, raising the costs.

Window tinting is not the only way to help improve energy costs, block UV rays, or enhance privacy. Window coverings such as curtains, blinds, and shades all do the same thing to some extent. There are many differences, however, that you may want to consider.

Window film is considered a very low-maintenance material and, in fact, requires less maintenance than a plain glass window. It is less porous than glass, so it will show fewer streaks and fingerprints, requiring less cleaning.

When you clean the film, use a mild dishwashing detergent mixed with water and a soft cloth. Do not use vinegar or ammonia-containing glass cleansers because these can damage the film.

In addition to standard window film installation, you may want to consider the following when making your decision:

While window film is designed to block heat and light from entering your home, smart glass does this automatically. This replacement glass pane adjusts to the amount of light and heat it detects, so it can block more UV rays or open up to let more light in on overcast days. Smart glass panels cost around $650 per window installed.

If you decide that you do not like the tinted windows, it is possible to remove the tint, leaving your windows in the same condition they were previously. You can remove the tint yourself by spraying the film with ammonia and scraping it from the window with a razor blade. You can also have it professionally removed at a cost of around $3 to $4 a square foot.

While many factors influence the cost of this project, most homeowners pay around $7 a square foot on average.

It is possible to have your home’s windows tinted, either professionally or on a DIY basis.

Some types of window tint are designed to block the sun’s heat and UV rays, which can keep your home cooler.

Some tinted windows only subtly darken the glass, reducing glare, while others obscure the view. Therefore, it depends on the tint as to whether the glass can be seen through at night.

1 Bay windows: A set of 3 or more windows that projects beyond the outside wall of a building. These are great for allowing light into a room

How much does it cost to tint home windows in my city?

Cost to tint home windows varies greatly by region (and even by zip code). To get free estimates from local contractors, please indicate yours. 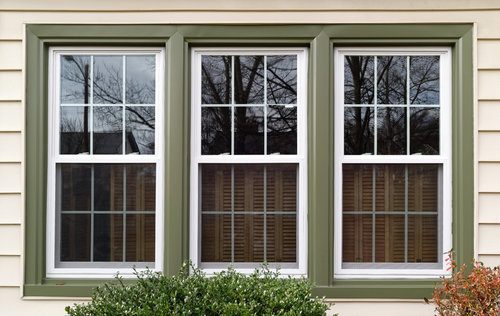