How Much Does It Cost to Remove Snow From a Roof?

National Average Range:
$250 - $500
Get free estimates from snow removal service providers near you

A light dusting of snow on your roof should not cause you to worry. If you have a roof with a low pitch, experience a great deal of snowfall during winter, or have a home that’s partial to developing ice dams, removing the snow from your roof periodically is a good idea. This helps prevent leaks, ice dams, roof deterioration, and even roof collapse.

Not every property needs the snow removed after each snowfall. Homeowners need removal when more than 12 inches of wet snow is at least partially frozen. The national average cost to remove snow from a roof ranges from $250 to $500. Most homeowners pay around $300 to remove 18 inches of snow or ice from a flat roof and no larger than 2,500 sq.ft. Costs can be as low as $150 to remove 12 inches of snow from a 1,500 sq.ft. flat roof. But costs could be as high as $700 if the roof is 3,500 sq.ft. and is steeply pitched and structurally intricate.

On average, most roofs are safely able to withstand about 20 lbs per sq.ft. of snow before sustaining damage. This calculation means that you should not let your roof accumulate more than 12 inches. Not only is it unsafe to allow more than a foot to sit there, but more snow also means more cost. For instance, removing a foot of snow from a 2,500 sq. ft. roof could cost as little as $250, while removing 24 inches could be up to $500. When there are more than 24 inches, it costs $50 to remove each additional 6 inches. Although the amount of snow influences the average project cost, prices usually depend more on the square footage. 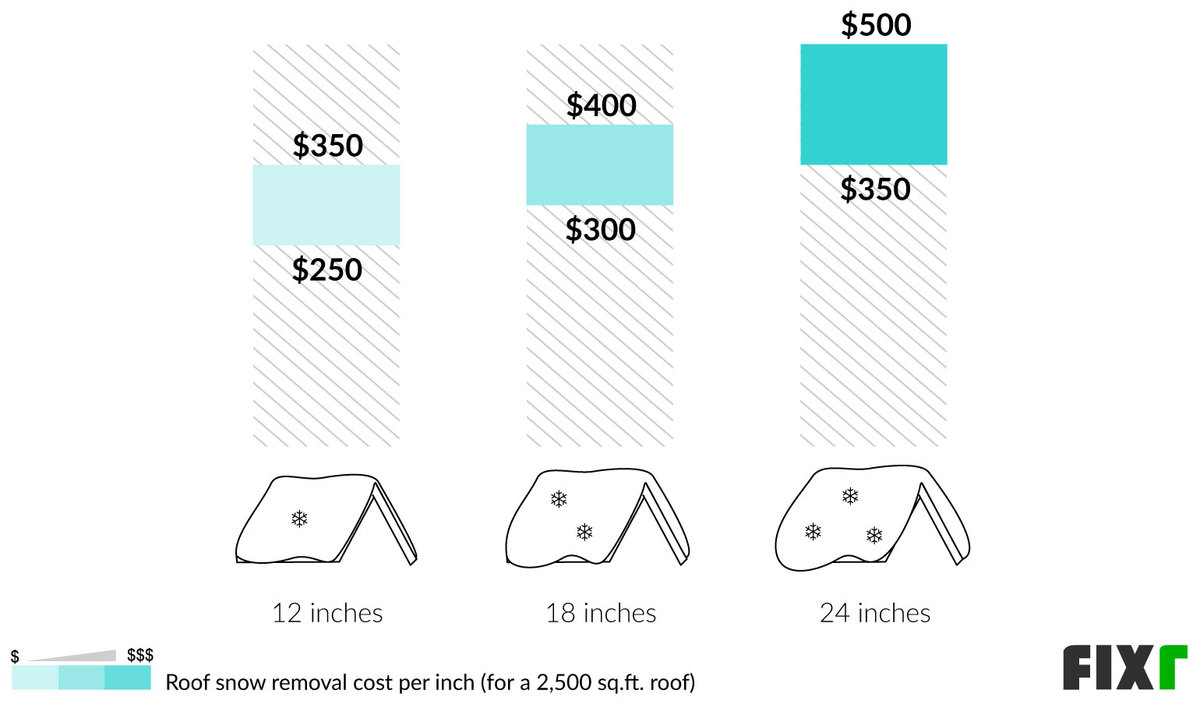 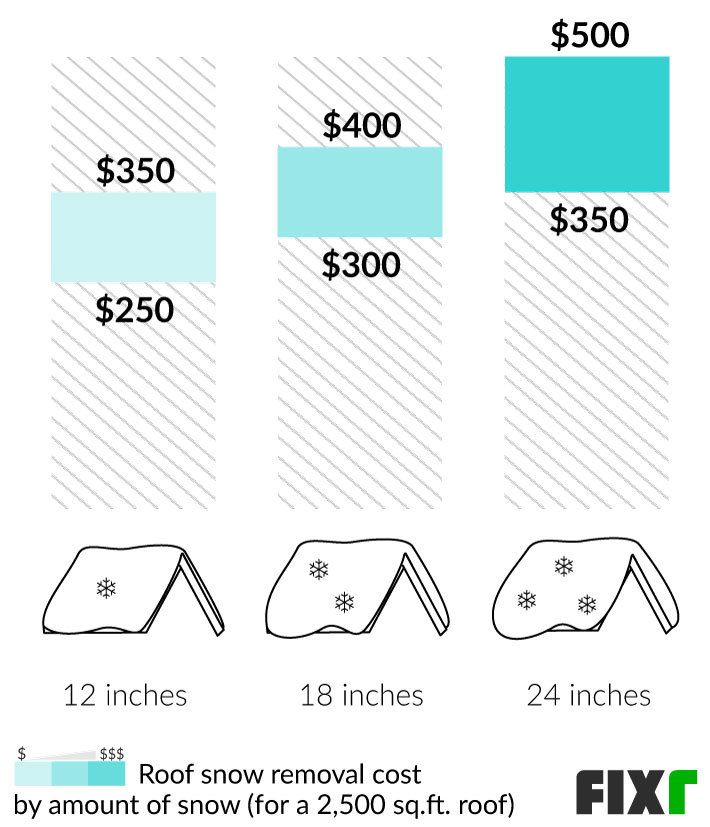 Get free estimates from trusted roof snow removal service near me

The cost for a professional to remove snow from your roof primarily depends on the size. The average American roof is 2,500 sq.ft. Roof shoveling prices include time for tedious, dangerous labor. The costs stated below have been estimated using the average cost per hour and calculating the number of hours that each job would take. For example, removal from a 2,500 sq.ft. surface usually takes around 5 hours at $50 to $100 per hour, which would be around $250 to $500. It takes 1 hour to remove approximately 500 sq.ft. of snow. However, if the surface is very sloped or difficult to access it can cost around $100 per hour more. 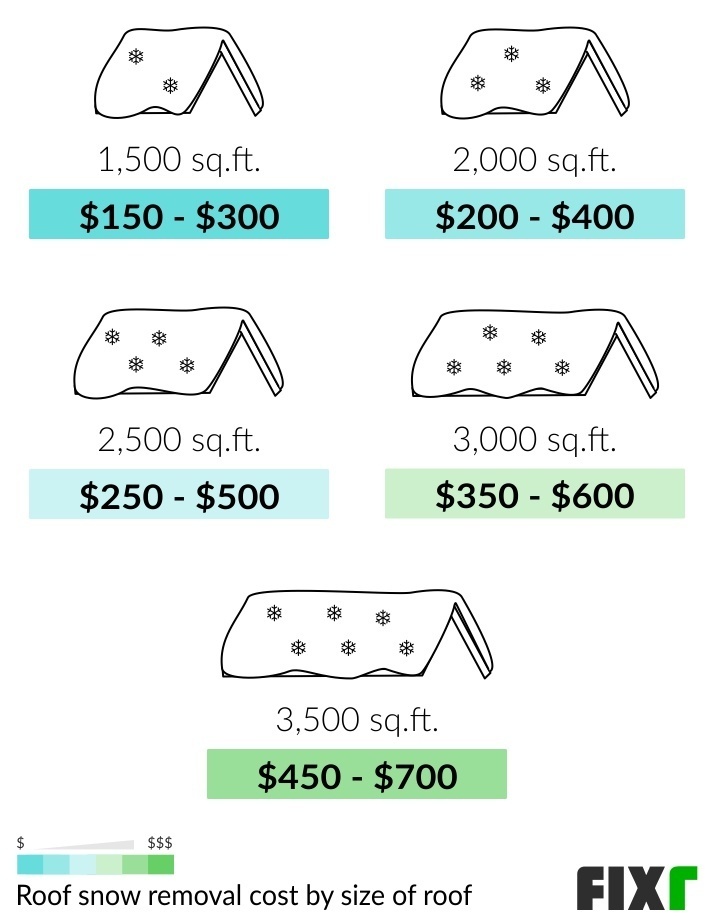 The removal of 12 inches of heavy, semi-compacted snow from a flat 2,500 sq.ft roof requires roughly 5 hours for a total of around $300 on average. The removal cost is primarily based on the square footage. Therefore, the cost of removal per event and per visit will be the same. The cost range for removing roof snow per visit is $150 to $700. You pay near the top of this range if your roof is larger than the average American roof of 2,500 sq.ft. and/or you have a steeply pitched surface where snow accumulates in hard-to-reach areas. Professionals do not usually offer monthly or yearly contracts for this type of service. These are common cost methods for removal from driveways, sidewalks, and parking lots.

Larger roofs, heavier snowfall, and ice accumulation all mean that the removal process takes longer. Since many companies charge per hour or half-hour, the longer the process, the higher the cost. The pitch also plays a role. Typically, any work done on a roof with a very high pitch costs more than work done on a flat one. However, in this case, the higher the pitch, the more likely the snow will slide off on its own. So, removal from a flat roof may actually cost more, as there is likely more to remove. 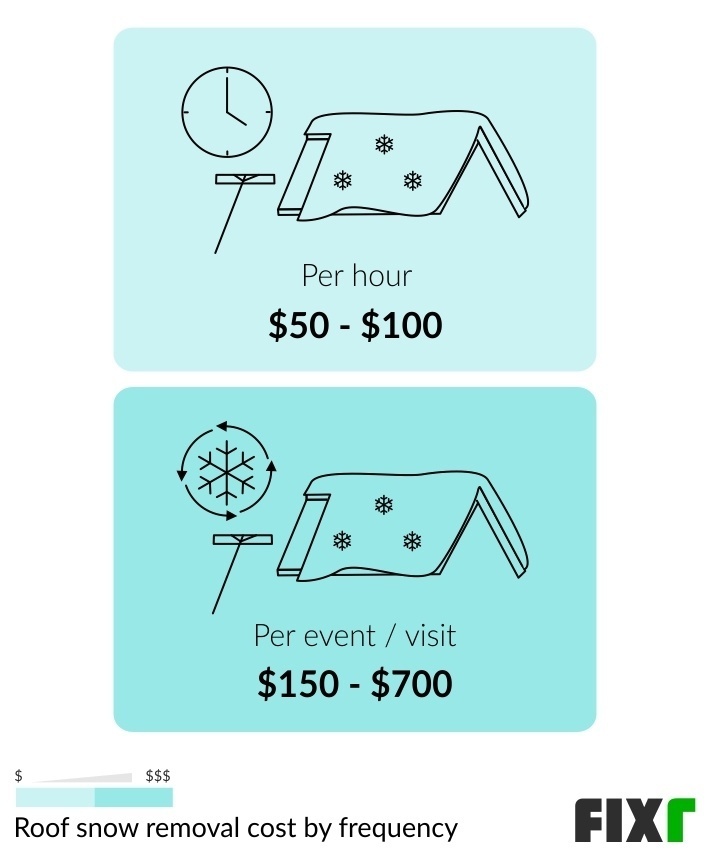 How Much Snow Can a Roof Hold?

Knowing when to remove the snow from your roof is probably the most challenging part of the process for homeowners. Modern roofs are built to hold a minimum of 35 pounds per square foot, which is 6-inches of packed snow or 12-inches of fluffier snow. Those with a pitch above 4-½ inches or a rise of more than 4-½-inches per foot will not tend to accumulate more than this. More than that will generally slide off.

However, those with a flatter pitch accumulate a bigger amount over time, increasing the weight to 60 or even 75 pounds per square foot. This amount is more than the it can safely hold without developing problems. For homes with flat roofs, removing the snow when it reaches 12 inches in depth is recommended.

For other roofs, the matter is more complicated and depends on the weight of the snow. If it has been freezing and compacting, it’s also getting heavier and not necessarily sliding off. In this case, you can have it weighed. A 12-inch square section is removed from the roof and weighed. If it weighs 60 pounds or more, you need to have the snow removed to prevent damage. If less, you may be risking more damage to the roof by shoveling than by leaving it alone. 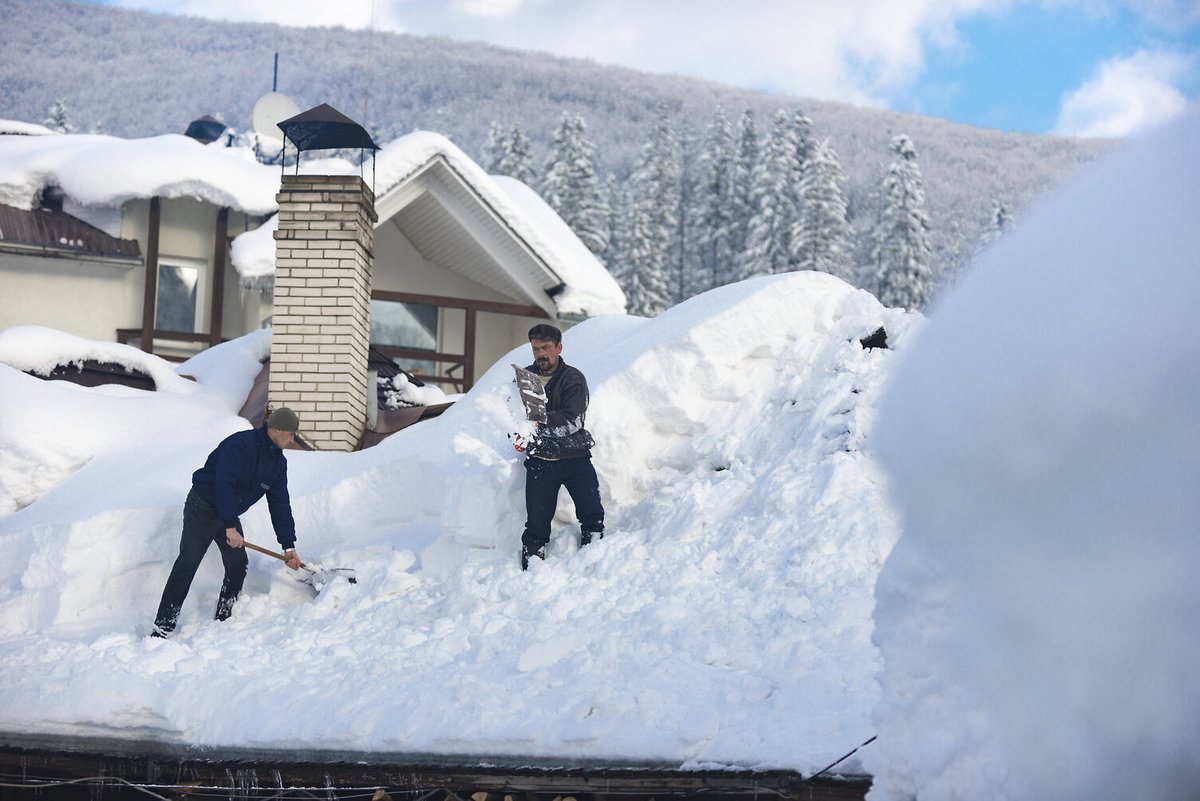 The other issue to consider is an ice dam. This is a condition when the snow on your roof melts, then refreezes at the edge. An ice dam causes water to back up beneath your roofing shingles, causing leaks and deterioration. Ice dams can cause icicles, which can fall and hurt people standing or walking below the eaves. The cost to remove ice dams ranges from $600 to $1,500.

Not every property accumulates ice dams. Homes with proper ventilation and insulation in the attic will not develop them as frequently as homes without adequate ventilation and insulation. If your home develops ice dams frequently, it’s generally recommended that you have your house ready before the winter season starts, and the snow removed at least from the front of your roof every 6 inches.

Compare prices from snow removal professionals near you

Some homeowners install electric cables on their roof to warm it and prevent the snow from accumulating. These are not always the right choice. However, if you’ve had problems in the past, the cables may prevent them from occurring again. They cost between $500 and $1,500 or $10 to $20 per linear foot.

If you’re having a new roof installed, and you’ve had problems with ice dams in the past, you may want to have an ice shield installed. This rubber membrane goes beneath your shingles. It helps prevent the leaks that occur when an ice dam backs up on your roof. It costs around $400 to $800 to install.

Another way of dealing with ice dams is to install heated gutters. Heated gutters keep the edge of your roof warm, preventing the melting snow from refreezing there. They cost around $500 to $4,000 on average.

Too much could be between 6 and 12 inches depending on the issues--for ice dams, 6-inches; for roof collapse, 12-inches.

No, but very heavy snow can cause structural problems and damage, while some others may develop ice dams.

Yes, most homeowners insurance covers roof collapses from snow. However, depending on the age and its maintenance schedule, your policy may only pay a depreciated value.

Yes, it acts as an insulator on roofs or other structures. The actual level of insulation varies based on the density of the snowflakes and their moisture content. However, the average snowfall will have an R-value of one per inch, similar to wood. A foot of snow provides about as much insulation as a wall filled with fiberglass insulation.

It depends on what kind it is. For instance, fresh fluffy snow might be three pounds per square foot. On the other hand, heavy, moisture-laden snow could weigh as much as 21 pounds in the same amount. For ice, that number increases to 57 pounds for each square foot.

Flat roofs have no angles to help remove it from the surface. They also have flat sections where water may freeze and hold it in place. These types of structures see damage the most quickly during heavy snowfalls. On average, they can handle about 20 pounds per square foot of snow. After that point, they start to stress, and damage may occur.

The roof of a mobile home is not designed to hold a lot of snow. It should be cleaned more quickly than a flat or slanted roof on a traditional home. On average, a mobile home can hold about six inches of accumulation before needing removal. Letting more than that amount accumulate can result in damage.

Several methods may be used to prevent the buildup of snow on a metal roof. The most common is the usage of heat cables, which melt it toward the edges. Sidewalk salt or calcium chloride can also be added to the edges of the roof to help melt it. Keeping the attic at the same temperature as the outdoor temperature can also help with the issue.

How much does it cost to remove snow from roof in my city?

Cost to remove snow from roof varies greatly by region (and even by zip code). To get free estimates from local contractors, please indicate yours. 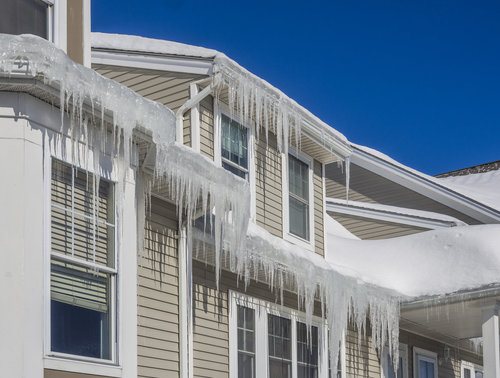