National average
$135
(covers damaged connectors or cables or a high-end t-con board)
Low: $40

The average cost of repairing a TV is around $135.

How much does it cost to repair a TV?

The average American spends more than four hours each day watching television. This naturally means that encountering problems with your set can disrupt your normal routine. When your TV quits working, you’ll want to find a reliable repair solution as quickly as possible.

Common television repairs involve problems with the picture, sound quality, or a broken screen. The average cost of fixing the most common types of TV issues can be between $40 and $260.

Older televisions such as analog sets, as well as LED TVs are more expensive to repair. Parts for these are harder to come by, which adds to their price. In addition, parts for models that are 42” or above are more costly, thereby adding to the price of repairs.

An LCD TV can last between 30,000 and 60,000 hours. Even so, the picture quality will start to deteriorate after only a few years. This means that even if you repair your set, you may not be able to fully enjoy it if it is already more than five years old. In many cases, the money you spent to purchase your original model may easily buy you a bigger, higher definition TV.

The chart below details some of the most common problems with LED, OLED, LCD, and plasma television sets, as well as suggested solutions. Costs are listed next to the problem for easy reference.

At the first sign of trouble, you may be tempted to take your set apart and try to fix it yourself. However, you should avoid doing so because it could void your warranty. Not only that, but modern televisions are highly technical, and contain components that the average person is likely not familiar with.

A television repair technician has earned a career certificate or Associate’s degree in electronics technology or a related field. You can expect to pay between $40 and $60 per hour in labor for someone to fix your television.

The amount of time it takes to repair your TV will depend on what the problem is and the availability of parts. Most jobs can be completed in one to three hours when parts are on hand.

Most technicians will charge you a diagnostic fee up front. This fee is for determining what the problem is and can run between $75 and $100. The cost is often waived if you allow the shop’s technicians to make repairs for you.

Replacing vs repairing a television

Consumer Reports recommends replacing electronics whenever the cost of repairs equals or exceeds half the cost of a new purchase. You might also want to replace your set if a similar one is less than $200, or if your screen is under 32”. For example, it would cost around $148 for a new mainboard in an LG Model 24LF452B 24” TV, which would take around one hour to repair. As a result, you could pay anywhere from $188 to $208 to repair your set, as opposed to spending around $120 for a brand new model.

On occasion, a television’s screen will burn out or become discolored. When that happens, using the built-in pixel shift software or refreshing the screen will sometimes resolve the issue. If these self-help methods are ineffective, you will need to replace your set.

When a television is nearing the end of its lifespan, it may require more frequent repairs. If yours has required more than two or three repairs within a twelve-month period, it could be time for a replacement.

Television repair costs can vary widely, but the average consumer will pay somewhere between $40 and $260. Prices depend on the make, model, and size of your set, as well as the availability of parts. It is generally more expensive to repair an older model than it would be to replace it. New televisions are becoming more affordable every year, but the price of parts may remain steady or even increase.

It is possible to repair a flat screen television with only superficial cracks, black spots, or vertical lines so long as they have not penetrated the LED or plasma.

Remove all external cables, unplug your set, and lay it face down on a flat, soft surface. Remove any screws that are holding the frame in place and then gently remove the frame and set it aside. Put your new screen in place and reconnect the internal cables in the same manner in which you first disconnected them.

A new flat screen television starts at around $99 for models with a 32” screen or less. A set measuring approximately 40 inches will run you between $150 and $400. You could pay as much as $7,000 for a model with a 77” screen or larger. In addition to screen size, the price of a new television is based on the type of TV, its features, and manufacturer quality.

How much does it cost to repair a TV in my city?

Cost to repair a TV varies greatly by region (and even by zip code). To get free estimates from local contractors, please indicate yours. 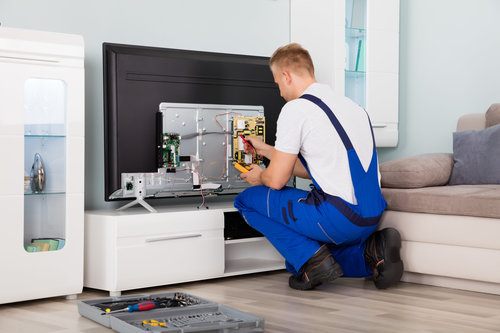