How Much Does It Cost to Hire a Biohazard Cleanup Company?

The cleanup of biological hazards is important work, and it involves safety practices and protocols that can make it an expensive service. Biohazard and “hazmat” refers to potentially hazardous materials and substances, typically from living organisms like people or animals. Biohazard cleanup entails removal of these dangers in a safe way by trained and qualified professionals.

Plan on an average cost of $3,000 - $5,000 to hire a biohazard cleanup company, with the average customer paying $4,000 to clean up biohazardous waste in a 2,000 square foot home, such as a hoarding situation or virus decontamination.

Biohazardous waste should only be addressed and cleaned up by a professional for the sake of safety. These individuals are specially trained, have the necessary PPE on hand, and have access to the specialty equipment that is required for such situations. The process can take a couple hours for removing pet odors, up to several days to clean up a crime scene. While many work in pairs, some companies enlist a biohazard team which makes the job much faster, charging a per-hour rate of up to $600, as it is common for biohazard professionals to garner $250 each, per hour. Waste removal fees are often separate, and can run into thousands of dollars for extreme cases. Know that the costs for removal run the gamut as there are many variables involved that add to the expense of biohazard remediation. For example, it will cost significantly more to hire professionals to clean up a chemical spill than it will to remove the smell of pet urine from your home.

Disposal fees are also applied if you want to get rid of a great amount of waste. Normally, using a 20 gallon waste bin costs around $250.

There are some factors that can make your biohazard cleanup project more expensive:

Consider the following safety levels and costs when it comes to biohazardous waste cleanup:

Preventing transmission of contaminants and viruses requires carefully attentive cleaning processes. Some bacteria and viruses can survive on certain surfaces for up to 72 hours, so decontaminating requires follow-up visits, at an estimated $1,500-$3,500 for the entire job. Additionally, hazmat suits cost an estimated $80 each, an expense passed on to the customer. This process may require that property owners leave the premises for several days, and/or tenting the home to effectively limit who goes in and out. Special antibacterial/antiviral cleaning agents are used and some items, belongings, fixtures will require special handling and laundering.

Medical waste means any potentially-infectious material or waste, usually from a hospital site, clinic, doctor or dentist’s office, lab, or other similar source. Removing medical waste requires special handling and certification. In many regions, medical waste must be disposed of at hospital sites only. Medical waste must be bagged in special red bags that identify that it is medical waste with warnings. Some examples of medical waste include used wound dressings and hypodermic needles. Medical waste removal fees are often separate, and can run into thousands of dollars for extreme cases. Waste removal professionals are specially trained in safety gear and equipment, including the proper use of Personal Protective Equipment (PPE). Medical waste disposal companies will arrange for scheduled pick-up for this waste, usually on a monthly or quarterly contract. The prices for these services vary depending on many factors. Compare costs among providers in your region online.

Removing and cleaning up chemical hazards, such as waste from dismantling a methamphetamine laboratory, is dangerous work that requires hazmat suits and specialized equipment. Drug labs are very dangerous scenes that can take around five days to contain and clean. First, everything is removed from the site, then it is thoroughly cleaned. Before the job is complete, the biohazard cleaners test the site for hazardous materials or substances. The fumes are toxic, even fatal, and can some chemicals be absorbed through skin contact.

Another instance where you might need chemical biohazards removed is in the event of a spill or leak of a dangerous substance, like a gas spill at a business or home. The highly flammable nature of gasoline makes it a public safety issue that requires an immediate response from a spill cleanup company. Some chemicals are considered to be highly hazardous, meaning that they are toxic and reactive, and, according to OSHA, must be removed by professionals in a very precise way.

Deceased animals, both wild and domestic, that weigh under 50 pounds can typically be bagged tightly and disposed of at transfer stations by homeowners or residents in the city that they live in. On average, the transfer station charges around $25 per bag disposed and there is no special permit required. This is the same protocol for self-disposing of animal feces, though many transfer stations require that you double-bag the waste. In extreme cases, such as in animal hoarding situations, the waste and fecal matter should be removed and disposed of by a biohazard professional to prevent cross-contamination and possible disease.

When someone dies at home, it may be a few hours before they are discovered. Time is of the essence when it comes to unattended death cleanup; failure to promptly remove the body and any waste can impact how livable the property becomes. Odors from decompensation in warm conditions can wreak havoc on the home, requiring professional cleaning, sanitizing, and deodorizing. Depending on how long the individual was deceased in the home, thorough cleaning can run into thousands of dollars.

In extreme cases, crime scene cleanup companies charge up to $600 per hour. This typically includes the cost to clean, disinfect the site, remove and transport waste, and dispose of any hazardous substances or materials.

Cleaning up blood and bodily fluid, such as at a crime scene, is expensive and quite involved. First, many of these sites have sat for prolonged times as there are often legal and investigative protocols that need to be followed before cleanup may commence. The safety measures required to curb exposure to the hazards make crime scene cleanup costly. In the case of suicides or homicides, it can cost up to $25,000 to clean and restore the site.

Hoarding cleaning differs from regular cleaning as, typically, the situation involves biohazardous materials, like rotting trash, animal waste, food waste, and items that could otherwise be potentially unhealthy or dangerous. It is not uncommon for biohazard teams to find deceased pets and pest infestations when cleaning extreme hoarder homes. Sometimes, they even offer human waste cleanup services. Hoarding cleanups can run into some considerable expense, depending on the severity of the situation. In the case of a hoarding home, the waste and biohazardous materials must be removed first, before any actual cleaning can occur. This will also reveal the extent of any structural damage to the property (as is common in hoarding situations) that needs repair once the site has had biohazards removed. Many professional cleaners charge up to $1,000 per day, though estimates average anywhere from $25-$150 per hour.

Some odors, such as pet odors or the smell of urine, seem impossible to get rid of. Depending on what causes the odor, you will likely pay up to $100 per hour for sanitization plus the cost of supplies and solvents.

There are numerous steps to the biohazard cleanup process which are fairly standard in most, if not all, situations:

Biohazard cleanup is often required in response to a complicated situation. Many cleanup professionals will not enter and clean a site if the owner is present due to the ethical dilemmas this can cause. Some cleanup professionals enlist the help of a qualified counselor or therapist to accompany them to situations, such as hoarding homes, to help with the emotional issues that can come up. This will increase the overall cost, and an independent therapist typically charges around $100 per hour.

Biohazards can also wreak havoc on the structural integrity of a home. Often-times, there are reconstruction and repairs that must occur after the cleanup to remediate the situation. Some common damage costs include replacing flooring, which may be warranted due to damage from biohazards in the home. Carpenters charge around $70 per hour to make basic repairs, plus the cost of flooring materials. Paint may require touch-ups, at a rough cost of $50 per hour. Drywall should be repaired, as needed, which costs around $200-$280. In severe cases, structural damage may merit the services of a structural engineer to assess and plan for the safety and integrity of your home. Expect to pay from $500-$2,000 for an engineer to evaluate and design plans for your renovations due to extensive damage.

Hazmat cleanup refers to hazardous materials cleanup and removal. It is necessary to have a hazmat company safely remove potentially dangerous substances, like body fluid or bacteria, from a home or property. It is a task best left to individuals with training in the removal of such materials.

Crime scene cleanup companies make between $100 and $600 per hour, plus waste disposal, transportation, and equipment costs.

The first thing to do is complete training through OSHA for exposure to bloodborne pathogens and use of PPE, which is required for anyone working with biohazardous materials or waste. It also makes sense to work with experienced biohazard cleaners before launching your own business.

Yes, depending on the circumstances, biohazard cleanup is often covered by insurance. For instance, if someone dies in a home, the homeowner’s insurance will typically pay for cleanup.

Certainly whether a crime scene cleaner makes good money depends on many different factors, but many report earning an average of $80,000 per year.

Crime scene cleanup is a good business that pays well. It is not a conventional job in terms of hours, but many biohazard removal contractors report annual incomes of $80,000 and up. Many cleanup companies command up to $600 per hour for their services in extreme cases.

How much does it cost to hire a biohazard cleanup company in my city?

Cost to hire a biohazard cleanup company varies greatly by region (and even by zip code). To get free estimates from local contractors, please indicate yours. 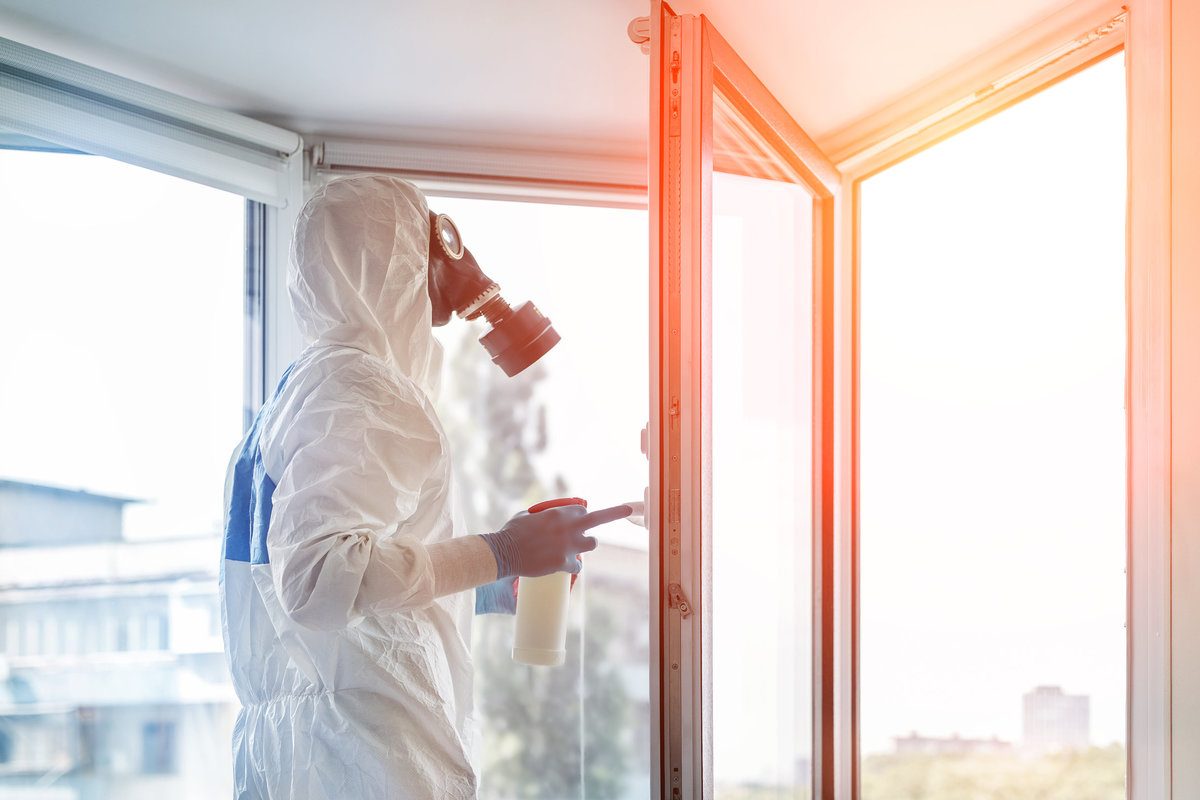